CULTURE IN JAPAN IN THE EDO PERIOD

ARTS IN JAPAN IN THE EDO PERIOD 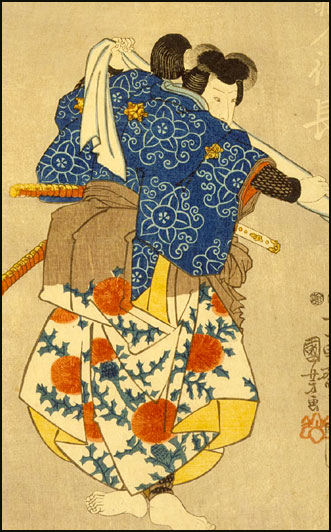 "During the Edo Period (1603-1868) both the subjects and styles of painting diversified significantly," wrote Smithsonian art curator Ann Yonemura, "as patronage broadened to include a newly affluent merchant class. Genre painting of contemporary urban life, new subjects and styles influenced by a limited importation of European art, and work by artists who based the lives on Chinese scholarly ideals flourished."

The Genroku era in the late 17th and early 18th century is sometimes regarded as the golden age of Japanese art, Kabuki plays, haiku poetry, and woodblock printing.

Edo period Japanese art is very popular worldwide. An Edo art touring exhibit drew 900,000 people in 2007, making it the most seen art show in the world that year.

Daimyo, Samurai and Art in the Edo Period

The Edo Period was a time of relative peace. With no wars to fight and non-Japanese restricted from entering the country, the shoguns and daimyos (landed aristocrats) and samurai under them, concentrated their energies on the administration of the estates and pursuit of the art forms such as poetry, painting, architecture, No theater, calligraphy, flower arranging and the tea ceremony. With no foreigners to distract them, the daimyos and samurai were able to develop and refine art forms that were uniquely Japanese.

The emphasis on the arts was intended in part to keep the minds of military men off of military matters. "In daimyo Japan," Bennet Shiff wrote in Smithsonian magazine, "culture became synonymous with authority. Lords competed with one another in high art, tea, theater, poetry and the employment of artists, actors, poets, tea masters. Frequently they practiced one or two arts themselves. Not to participate was to be dropped out of what was meaningful and necessary. It is difficult, perhaps impossible, to name another society in world history in which art was so much a part of daily existence."

Urban Art in Japan in the Edo Period 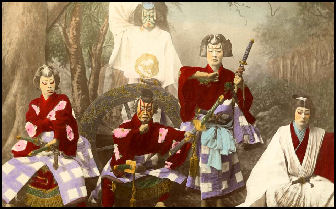 19th century kabuki troupe The rise of large urban areas, the increasing power and influence of the merchant class and a good network of roads and water routes in the Edo Period helped to take art out of the daimyo courts and bring it to the cities and ordinary hardworking and hard-partying Japanese. Artist liked the changes. They were able to sell their works to a much wider audience.

Urban Edo art, often in the form of colored prints, was more direct and rawer than daimyo art and often satirical and humorous. Robert Singer, the force behind a superb Edo Period exhibition at the National Gallery of Art in 1999, wrote that this kind of Edo art is characterized by "bold, sometimes brash expression...and playful outlook on life in general." [Source: Time magazine]

The subjects of urban Edo art were prostitutes, sumo wrestlers, popular actors, everyday life scenes, and people at work. Religious imagery sometimes was treated with irreverence and symbols were used that ordinary people could understand. There is clear link between Edo urban art and manga.

Some of the greatest Edo art was works were neither paintings or sculpture but rather were things like writing boxes, tea bowls, and game boards. "It may be that no civilization, East of West, attained a greater refinement in the decorative arts than Edo Japan," wrote TIME art critic Robert Hughes. "Ceramics, lacquer and textiles were brought to an extraordinary pitch of aesthetic concentration by a large body of artisans."


18th century writing box "Skill was the key," Hughes wrote. "Edo artists and patrons loved virtuosity within a given medium, but they didn't have a hierarchy of art and craft. To them, the work or a lacquerer or papermaker was no less worthy than that of the screen painter, and in any case so many media could converge in a single work that art hierarchy became meaningless."

Edo art objects included polychromatic wood No masks of women who have become demons because they have been betrayed by love; cheukei fans used by No actors playing women roles; ceremonial samurai swords made of rayskin, lacquer, copper, gold, enamel, leather and steel; reptile-like samurai armor made from iron, leather, lacquer, silk and gold; leather saddles and stirrups embellished with gold and lacquer; and uchiakake ("outer garments" worn by samurai-class women), embroidered with blossoms, clouds and birds.

Ideas about the decorative arts made their way into cooking and perfumery. One Edo period cookbook illustrates 55 different ways to cut and display carp.

Many Edo period painters were samurai. Paul Richard wrote in the Washington Post: “Slicing through a torso with a curving steel blade and putting ink to silk with a liquid-loaded brush, both of these were stroke arts. Both required the same swiftness, the same lack of indecision. For the master of the brush and the master of the blade...the flawless stroke expressed a Japanese ideal---the beauty-governed union of sure, unhurried speed and centuries-old tradition, utter self-assurance and Zen purity of mind."

“Painting from Edo period was rich in drama and symbols. A painting of a carp swimming up a waterfall---something bottom-dwelling carp are unlikely to do---is seen as a manifestation of a fish becoming a dragon and viewed as an allegory of social climbing. An image of a monkey trying to catch a wasp is a warning to not cross a feudal lord as the Japanese words for word for “wasp” (hachi) and “fiefdom” (hoch) rhyme as do the ideograms “monkey” and “lord."


Woodblock printing in Japan is known as ukiyo-e, literally "pictures of the floating world." One of the most popular forms of Japanese art, it was created for the contemporary masses and depicts images of urban life and natural scenes that ordinary people could relate to and enjoy. The "floating world" is a Buddhist metaphor that refers to the changing world of fleeting pleasures, which were often found both in seasonal changes of nature and the entertainment districts of Tokyo, Osaka and Kyoto.

“Ukiyo-e” is derived from “uki," a Buddhist-derived term denoting the state of mind conveyed by the German word “weltschmerz” (“disenchantment with the actual," or “world weariness”). During the Edo period the kanji (Chinese character) for “uki” was replaced, playfully, by the homophone kanji for “float” and “ukiyo” took on antithetical meaning---the worldly “sea of trouble” became “sea of tranquility," in which impermanence was celebrated not lamented. [Source: Mark Austin, Daily Yomiuri]

Among the Westerners who collected ukiyo-e were Vincent Van Gogh, the famous American architect Frank Lloyd Wright and the painter Claud Monet, who was particularly found of Utamaro and Hokusai. Wright once said, "The Japanese print is one of the most amazing products of the world and I think no nation has anything to compare with it."

Ukiyo-e prints are famous for their exquisite calligraphic lines, bold composition, dramatic colors and flat, unshaded subjects. Some images are serene and dignified and look at home in museum while others are full of drama and violence and look as if they belong in a comic book. Usually only a few hundred or a few thousand prints were made. On average a printer could make about 200 prints a day.


Hiroshige Fuji Woodblock printing originated in China but was greatly improved by the Japanese through the skill of Japanese craftsmen and introductions of washi paper; which tolerates repeated printing and absorbs color without collapsing; the development of the kento method or printing, which ensured that layers of were color correctly applied and aligned; and invention of the baren, a circular pad mad from compressed laminated paper that was used in manual printing to apply the flat colors so pleasing to fans if ukiyo-e.

The first ukiyo-e in the 17th century were simple monochrome black prints. Later "red prints" appeared. They were followed by yellow and green prints, and eventually full color prints known as nishikie, were developed in the middle of the 18th century.

Many of the of the best works of ukiyo-e are found now outside of Japan in places like British Museum, the Victoria & Albert Museum in London, and the Minneapolis Institute of Arts. Many of these were snatched up in the years following the end of Edo Period---as Japan rushed towards modernization--- when ukiyo-e was seen as passe and disposable, and Western collectors acquired huge masses of work for a song. Almost half of the 25,000 prints, books and paintings at the Victoria &Albert Museum---regarded as one of the largest and finest collections of ukiyo-e n the world---was obtained in a single purchase from a London dealer in 1886.

Kabuki and Geishas in the Edo Period


Kabuki actor by
Sharaku The first formally recognized kabuki show was performed in Kyoto at in 1603---the same year the Edo Period began---by a Shinto priestess named Izumo no Okuni and her troupe of female dancers to raise money for Izumo Taisha shrine. Though based on Buddhist prayer dances, early shows were generally romantic tales intended as popular entertainment. Like Noh, kabuki has its roots in drama, music and dance that can be traced back to the eight century.

Kabuki was inspired by the activities of Kabuimono, urban youths who were the punks of their day. They traveled in armed groups, thumbing their nose at middle class values and harassed anyone who got in their way.

Early Kabuki, known as kabuki odori (which roughly means “avant guard dance") were primarily dances, often known for their lewdness and vulgarity. Although women helped popularize the art they were banned from Kabuki in 1629 because many of the lead actresses were prostitutes and producers were concerned about fights breaking out between men trying to win the attention of the actresses. See Arts and Culture, Theater, Kabuki

Geishas first appeared in brothels in the pleasure quarters of Tokyo and Osaka in the 17th century. Their job was to entertain bar and inn customers with dancing and music. A geiko (literally "arts child") is the Kyoto expression for a geisha.

The earliest geishas were men known as taiko-mouchi (literally "drum carrier"). Like their female counterparts today, they charmed male clients with conservation, service, performances and sexual innuendo. There were around a half dozen taiko-mouchi still alive in the 1990s.

It wasn't until the mid 18th century that the geisha profession was dominated by women. In the 19th century geishas were the equivalent of supermodels. The most well-known ones earned substantial incomes and influenced fashion and popular culture. In a world where women were either wives of prostitutes, geisha lived in separate communities known as the "flower and willow world." See Arts and Culture, Theater, Geishas

Manga in the Edo Period 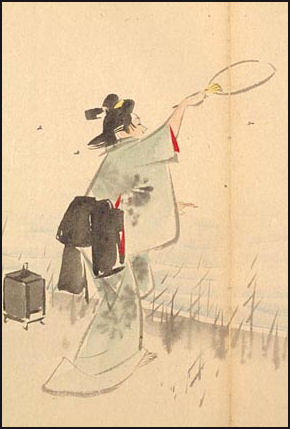 Hiroshige Catching Fireflies
Some trace the origin of manga back to nishiki-e prints made in the Edo period. These prints were often satirical and instilled with humor and fun, qualities found in modern manga. “They share a similar espirit, satisfying the purpose of entertaining people." The term "manga" was coined by the famous wood block print artist Katsushika Hokusai (1761-1849). Although he produced graphic images he did not produce true manga that tell narrative stories.

True manga has its roots in 19th century one-panel and later multi-panel newspapers and magazine cartoons that depicted political, satirical and humorous subjects. Some also trace its roots to the Japanese written language, which has so many symbols and characters it wasn't easily adaptable to movable type, and often it was just as easy to make wood blocks with words and illustration as it was to make wood block with long texts. By contrast, the Roman alphabet with is 26 symbols was adaptable to movable type.