CHRISTIANITY AND HIDDEN CHRISTIANS IN JAPAN 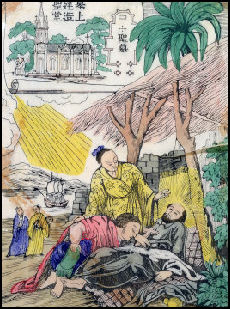 St. Francis Xavier There are about 1.7 million Christians in Japan (about 1.2 million Protestants and a half million Catholics). They make up about 1.5 percent of the population, compared to 49 percent in Korea. Christianity has traditionally found a following among a small highly-educated minority. It never caught in with the masses.

History of Christianity in Japan

Christianity in Japan can be clearly divided into three periods: the initial encounter with Christianity beginning in the mid-16th century; the reintroduction of Christianity, after more than 200 years of national seclusion ended in the mid-19th century; and the post-World War II period.

The prevailing view is that Christianity---European Christianity anyway---was brought to Japan by Jesuit missionary Saint Xavier in 1549. It spread quickly in the second half of the 16th century and was embraced by people who wanted a new kind of spiritualism and by merchants who wanted access to Western trade and technology. In the early 1600s, many Christians were killed and the religion was banned.Some scholars believe that Christianity arrived in Japan before Buddhism. Kyoto University professor Sakae Ikeda and the Japanese-born American scholar Ken Joseph, author of the book The Nation and the Cross, contends that Nestorian Christianity was present in Japan as early as the A.D. 5th century. They base their theory on: 1) the presence of Christian symbols found on the remains of Hory-ji temples built in Nara in A.D. 607; 2) the influence of Hata clan, builders of the 7th century Koryu-ji temples, who were thought to be members of a Nestorian tribe from Turkestan; 3) references to missionaries from Persia in Japanese historical records that arrived in Japan in A.D. 738; 4) 8th century graves in Kyushu and Gunma Prefecture that read: “Christ’s Grave”; and 5) the presence of Hebrew words in old Christian folk songs and Christian influences in old Buddhist rituals.

Some Japanese believe that Jesus was buried in Shingo in Aomori Prefecture. Their belief is based on a theory that Jesus's younger brother was the one who was crucified at Calvary and Jesus fled the Roman Empire via Central Asia and Siberia and settled in Northern Honshu, where he married a local woman, fathered three daughters and lived to the age of 106. He now is believed to be buried under a cross on hill in Shingo on land that belonged one of his descendant, Toyoji Sawaguchi.


another image of St. Xavier The Spanish Jesuit missionary Saint Francis Xavier (1506-1552), cofounder of the Society of Jesus (Jesuits), landed in Kagoshima in 1549. At that time Nagasaki was an important trade center between Japan and Portugal and the Jesuits established a headquarters there.

Christianity advanced very quickly, especially in southern Japan. Jesuit missionary activities were centered in Kyushu, the southernmost of the four major Japanese islands. By 1579 six daimyo (regional military lords) had been converted and there were an estimated 100,000 Christians. One daimyo even sent a delegation to visit Pope Gregory XIII in Rome. As was the case with early Buddhist sects, Christianity spread quickly because of political unrest, weak government and lack of central authority.

By 1600, the number of Christians reached 300,000 and peaked in the 1630s, when as many as 750,000 Japanese, or 10 percent of the population were born in Christian families or had converted to Christianity. The Portuguese also brought primitive muskets called harquebuses. Before the Portuguese arrived, the Japanese had never seen muskets or any other kind of firearm. Firearms and Christianity complicated the already complicated feudal war between the daimyos.

The efforts of the Jesuits were treated benignly by military leader Oda Nobunaga and also initially by military ruler Toyotomi Hideyoshi. Probably in reaction to their growing influence in Kyushu, however, Hideyoshi later turned against the Christians and had 26 crucified at Nagasaki in 1597. After he became the de facto ruler of Japan, in 1600, Tokugawa Ieyasu initially tolerated the missionaries but, in 1614, the Tokugawa government proscribed Christianity and expelled the missionaries from Japan. At this point there were more than 300,000 Japanese Christians. It is estimated that about 3,000 were executed, and a great number renounced their faith as a result of persecution. Many others concealed their beliefs and continued to practice Christianity in secret.

Hideyoshi Toyotomi and Repression of Christianity


memorial to Nagasaki martyrs Hideyoshi Toyotomi, on of Japan’s greatest rulers, initially welcomed the foreigners. He gave personal tours of his castles to a group of Jesuits but then he turned against them.

Hideyoshi began a campaign against Christianity in 1597 when he learned that Conquistadors followed missionaries in Latin America and that missionaries were active in the nearby Philippines. He banned Christianity, passed anti-Christian legislation and ordered the "Pope's generals" (missionaries) out. In 1597, 26 Catholics, including six foreigners and a 12-year-old Japanese boy were crucified on hill in Nagasaki. All 26 were later canonized as saints by the Catholic church after the crucifixion,

The heaviest repression took place in the early 1600s, when around 6,000 Christians were killed, mostly in the southern part of Japan, when Portuguese missionaries from Macao made the greatest inroads. Most of the dead were merchants and peasants. samurai and noblemen were forced to renounce the religion under pressure.

In May 2007, 188 16th-century Japan martyrs were beautified by Pope Benedict XVI. The 188 included on entire family The majority were laymen. A third were women. Before that 247 people related to Japan had either been beautified or canonized, including 26 martyrs, including four Spaniards, one Mexican and one Portugese, killed in Nagasaki in 1597

Repression of Christianity Continues into the Edo Period


memorial to Nagasaki martyrs Persecution of Christians that began before the Edo Period continued during it. Tokugawa Ieyasu, another great Japanese leader, outlawed Christianity and the Tokugawa shoguns eradicated it within 50 years using murder, persecution and decrees. In 1627 some Christians in Kyushu were boiled alive in the boiling waters of Unzen on the orders of the magistrate of Nagasaki and the daimyo of Shimabara. At least 30 Christians died. In 1638, 37,000 people, mostly Christians, were massacred during brutal crackdown after the Christian-led Shimbara Rebellion. As a result of this oppression it was thought the number of Christians was reduced to near zero.

The last Japanese priest was crucified in 1642. In November 2008, the Roman Catholic Church held its first ever beautification ceremony in Japan to honor 188 martyrs who refused to give up their religion despite persecution between 1603 and 1639. Among those honored were Julian Nakamura, who was a member of delegation sent to receive blessing from the Pope, and Petro Kibe, who was the first Japanese to visit Jerusalem. The ceremony came 27 years after Pope John Paul II said the martyrs should be recognized during a 1981 trip to Nagasaki. In the decades that followed Christianity was practiced in secret (See Hidden Christians Below).

Books about Christians Silence (1966), a book about the persecution of Portuguese Christians in the 17th century; and Chinmoku by Shusaku Endo (1981)

History of Christianity in Modern Japan

Persecution began to lighten up after Commodore Perry arrived in 1853. Christians were allowed to practice their religion in 1859, although they were not able to evangelize openly until 1873. Christian missionaries returned in 1859. Christianity was legalized and anti-Christian laws were repealed in 1873. Both Catholic and Protestant missionaries were active from this time, and although the number of converts was relatively small, Christians were influential in education and the trade union movement. Increasing nationalism and the promotion of Shinto shrine attendance as a patriotic duty made the 1930s a difficult time for many Christians. [Source: Web-Japan, Ministry of Foreign Affairs, Japan]

In 1895, several Japanese visited the Oura Cathedral in Nagasaki, built the year before for foreigners, and revealed they were Christians. The episode is famous in religious history in Japan and is known a the revelation of believers and proved that despite the most extreme repression Christianity remained alive in Japan. During this period over 30,000 “hidden” Christians came forward; they belonged to groups that had worshipped clandestinely during the more than 200 years of persecution.

Christian activity in the immediate postwar period had the support of Occupation authorities but only minor gains were made. In 2006, Christians, numbering 2.36 million individuals, made up less than 1.2 percent of the population. Despite the increasing popularity of superficially Christian wedding ceremonies, Christianity as a religion is probably still regarded as foreign by many Japanese. As knowledge of and interest in Christianity has grown over the years, people are certainly not unfamiliar with the religion. This familiarity, however, has not translated into a large increase in the number of believers. One possible reason for the lack of growth is that the emphasis on exclusive belief in the Christian God requires a strong commitment in rejecting the more relaxed polytheism of Shinto and Japanese Buddhism.


Edo-period Christian
writing box The Goto Islands, Ikitsukishima Island and Sotomecho---all near Nagasaki---are home to the last remaining thousand or so Hidden Christians, whose ancestors practiced Christianity when the religion was outlawed between 1614 and 1873.

The number of Hidden Christians shrunk from 30,000 after World War II to around about 1,000 on Ikitsukishima Island, 10 on the Goto Islands, and around 100 in Sotomecho, Ikitsukishima Island. Few young people are interested in the religion and there is a danger that Hidden Christianity might die out. They only people interested in learning the old chants and practices are academics.

Certain Shinto and Buddhist practices entered the Hidden Christian religion as a sort of camouflage at a time when Christians were sometimes executed for their beliefs. Hidden Christians, for example, used a “magic mirrors” that usually projected an image of Buddhas but when held up to light in a certain way projected shadows of a cross.

Hidden Christians considered themselves different from other Christians. They have two kinds of funerals: one Buddhist in nature and the another Christian. Group members recite traditional liturgies, named orasho (from the Latin world oratia), that have been passed down orally from generation to generation for so long many people no longer know what the words mean.

Because of the way early Christianity was packaged for Japan, Hidden Christians place a high value on the prayer of contrition and the veneration of the compassionate Mary. Hidden Christians worship before hanging scrolls with images of the Virgin Mary and Christ and use the words "Virgin Mary," "crucifix" and "Christ" in their liturgies. Religious communities usually have two leaders: one who performs baptisms and another who cares for religious objects.

Some Hidden Christians practices are uniquely Japanese. In some places Japanese-style shrines have been raised to honor Christian martyrs and to appease spirits. The 40-minute liturgies are followed by sashimi and sake. Offering of sliced raw fish are made to holy images and then eaten in the belief they have been given to them by God.

Hidden Christian rituals often vary from community to community. Some believe that holy water miraculously gushes out of certain stones. Some believe passing under hanging laundry is bad luck and insist people who perform baptism should not hold children. Others forbid the consumption of eggs because they are regarded as dirty and have strict rules on menstruating women and the direction men can urinate.