Conservative notions about ethnic purity remain strong in Japan. Theodore Bestor, a professor of Japanese Studies at Harvard, told the New York Times: “Japanese tend to have a fairly strong kind of inherent belief that genetics and biology really matter in terms of people’s behavior. So I think Japanese might be much more predisposed to thinking about a kind of genetic basis for personality than most Americans would.”

In 2005, future Japanese Prime Minister Taro Aso called Japan “one nation, one civilization, one language , one culture and one race.” A senior official quoted in the Washington Post said, “This isn’t America. When you go to the hospital to have a baby, we know what we’ll get: black hair, dark eyes, skin more or less the color of mine.”

In a 2010 television show called “ Anata wa Doko Made Nihonjin “ (“How Japanese Are You?”), a survey of 1,000 Japanese was conducted to find out what defined the modern Japanese individual. A list of 20 characteristics was derived. Among them were Japanese love hot springs (number 20); many Japanese wear glasses (19); Japanese are not good at English ( 3); they are no longer good at studying (2); and Japanese are overly impressed by titles and ranks (1). It also found that Japanese love curry (18), gossip (16), brand-name goods (15), saving money (13), uniforms (12), and manga (4) and revealed that Japanese hate to say “I love you”(7); are too gullible and trusting (17), poor talkers (8), love to work (10), like to stand in lines (11), are not interested in politics and keen on cleanliness. The evidence for some of the claims was persuasive; others not so. [Source: Wm. Penn, Daily Yomiuri]

Books: “The Chrysanthemum and the Sword” is Ruth Benedict’s “flawed but masterful analysis of Japanese culture.” It was written during World War II on commission for the U.S. government. “The Japanese” by Edwin O. Reischauer (Belknap Press at Harvard University, 1982) is also recommended. Good Websites and Sources: Wikipedia article on Japanese People Wikipedia ; What Japan Thinks, a blog with info on demographics and statistics whatjapanthinks.com ; Social Science Japan Newsletter newslet.iss.u-tokyo.ac ; Nipponia, Quarterly Web magazine on Japanese Culture and Life nipponia/archives

People, Race and Views on People and Race : Difference Between Chinese and Japanese, a Blog Report socyberty.com ; Portrayal of Race in Manga and Anime focusanthro.org ; Origins of the Japanese People nakasendoway.com ;Opinion on Asian Fetish colorq.org ; Physical Characteristics, Thais and Japanese ncbi.nlm.nih.gov ; Wikipedia article on the Mongoloid Race Wikipedia

Japan is regarded as one of the world’s most insular countries. Law enforcement officials and scholars sometimes begin their explanations of Japan's low crime figures with statements like "we are a homogeneous race" or Japan is a "monoracial society." Hundreds of studies and books have been published and read voraciously by Japanese on the attributes of collective Japanese culture and what makes the Japanese different from everyone else in the world.

In Japanese newspapers, renowned scholars write things like: "The Japanese are Mongoloid... Mongoloid children should be raised slowly and carefully in large families and be exposed to complex social relations. This kind of environment is essential in raising Japanese children to ensure their frontal lobe develops properly." The scholar that wrote this also wrote that the traditional Japanese fish- and rice-based diet is "most suited for the brains of the Japanese."

An extremist bureaucrat once explained to a an American audience that Japanese couldn't eat foreign rice because they had longer intestines than other people.

Japanese strongly desire the praise of foreigners. Television commercial feature foreigners complementing Japanese over their kindness and expressing admiration for Japanese technology. The media runs stories about what foreign textbooks and newspaper say about the Japanese.

The Japanese have traditionally prided themselves on the racial harmony of their people and sometimes describe Japan as a "monoracial" society with one language and one set of commonly held beliefs. This means there are not many non-Japanese ethnic groups in Japan and very few of the non-Japanese are Japanese citizens.

According to DNA studies Japan has remained in remarkable genetic isolation. The mutations are strikingly different from those of surrounding populations and account by themselves for a special haplogroup.

Rising Sense of Individualism in Japan


Young Japanese are much more individualistic than older Japanese. They have been called the "bean sprout generation." Bean sprouts grow fast but grow best in the dark and thus have no strength.

Many scholars believe that traditional Japanese group society is collapsing and being replaced by a more individualistic one. "Japan," wrote author Jonathan Rauch, "is being 'set free' not from state tyranny, but from a complex network of social constraints that produce repression and self-control in equal measure. Sometimes it's hard to tell where liberation ends and social decay begins, and every time I go to Japan I feel I see more of both."

As old ways of doing things break down many Japanese are not sure what they are going to be replaced with. And what many see is not encouraging. The Nobel-Prize-winning novelist Kenzaburo Oe wrote “Our identity as Japanese has withered away...Now we have nothing but the reflection of ourselves we see in the eyes of the West. We are confused and lost. The response to that lostness is nationalism.”

But some see the rise of individualism and rejection of the status quo as a driving force behind creativity and entrepreneurship and find more hope in that than doing things in old, stodgy Japanese way.

Japanese has its share of eccentrics. Hiroshi Nohara won some notoriety after spending four months living Terminal 1 of the international airport in Mexico City, somewhat like the character in 2004 Steven Spielberg movie “The Terminal”. The only difference was that Nohara had a valid visa and a ticket home.


In 2008, based on data collected from 7,000 people, geneticist determined that Japanese fall into two basic genetic types: people native to Okinawa and the Ryukyu Islands and those native to other parts of Japan. The biggest difference between the two groups is hair thickness and ear wax texture with those from the Ryukyu Islands having harder hair and drier ear wax.

About 95 percent of all Japanese are lactase deficient. This means they have problems digesting milk products.

Almost all Japanese are born with a Mongolian birthmark, a small patch of brown pigment located on their butt and/or lower back. The mark disappears when they are one or two years old. Korean, Mongolians, some Chinese, Hungarians and Bushmen or the Kalahari have a similar mark.

Fat accumulates differently on the European sumo wrestlers than its does on the Japanese ones. Mongolians have wider cheekbones than Japanese. Japanese have the same percentages of A, AB, B, O blood types as Estonians.

Asians on average are also generally thinner and shorter than Westerners but they are getting taller and fatter. Some believe that at least some of the difference can be explained by diet.

Japanese today are around three inches taller than Japanese who grew up around World War II. Most scientist attribute the increase to nutritional changes, such as more milk and meat in their diets. Others have proposed more far-fetched theories. One researcher suggested that the switch from sitting on the floor to sitting Western-style in chairs has straightened some Japanese out and made them taller.

The are two main ear wax types found in Japan: wet an dry. Students at Nagasaki High School were able to isolate the gene that determines ear wax type and with that knowledge collected samples ear wax from all over Japan and put together an ear wax map and found that dry ear wax is more common in western Japan. Studies have found that people living in Japan in the Jomon period (10,000 B.C. to 300 B.C.) carried the gene for wet ear wax while the gene for dry earwax was introduced into Japan by people that came from the Asian continent in the Yayoi period (300 B.C. to A.D. 300).

Study of Japan and Japanese 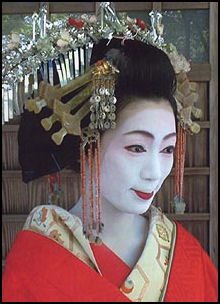 For a long time the study of Japan in particular and Asia in general was the domain of a few specialists but all that began to change in the 1970s as Japan emerged as an economic powerhouse and the people in the West began seeking cultural secrets behind its success.

Sawa Kurotani, an anthropology professor a Redlands University, wrote in the Daily Yomiuri, “Japan’s ascent as a modern, capitalist nation-state never erased the more traditional image of Japan. In fact, the emphasis on the uniqueness of Japanese capitalism and business practices reinforced the Western image of Japan as fundamentally foreign.”

In the 1990s, when Japan’s star began to wane during a period of economic stagnation there and China’s star began to rise as its economy began to take off interest in Japan and Japan studies declined while interest in China and China studies rose. Now many of those interested in Japan are drawn by popular culture — namely anime and manga — rather than by economics, trade and business.

People classified as Asians are physically different in some ways than people of European descent. In almost all cases Asians have straight, black hair and dark eyes. They also tend to have less body hair, less facial hair, flatter faces, smaller noses, wider cheekbones, and "shovel-shaped" incisor teeth (slightly scooped out shape of back side of the front teeth).

Asians are less likely to get some diseases than Westerners and more likely to get others. Many Asians get acne at a later age than Westerners. Fewer Asian men go bald than European men. There also appears to be less Asians with grey hair, but it is not clear whether this is because they get grey hair at a later age or dye their hair. Many Asian children find red and blonde hair and hairy arms and legs to be fascinating.

Northern Asians are generally stockier and have lighter skin and thinner eyes than southern Asians. All skin contains about the same number of melanocytes but the amount of melanin they produce varies. Dark skinned people produce more and light skin people produce less.

Some people think that difference between Asians and Europeans have existed for some times. While holding a cast made of Peking Man in the 1930s, Chinese archeologist Jia Lan told National Geographic, "This skull has some characteristic of modern Chinese people. For instance, the nose bone of Peking man was low and cheeks were flat, as in Asians today."

Individual strands of Chinese women’s hair are circular and wider and more resistant to breaking than the oval hairs of Western women. Chinese hair has higher pigment concentrations that makes it glossier and shinier than the hair of Western women and less likely to turn white. Chinese hair is less dense than Western hair with fewer hairs per square centimeter of scalp. 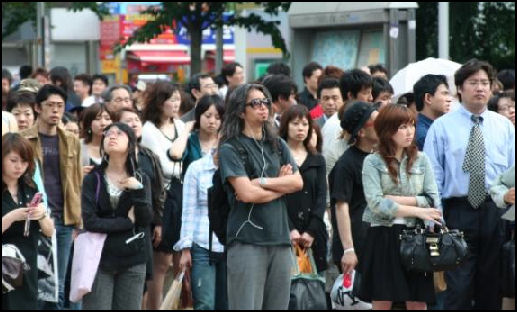