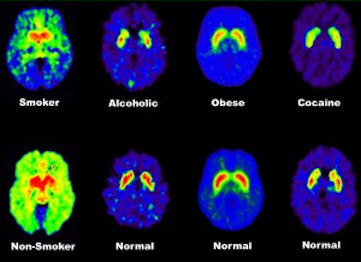 PET scans of brains Although different drugs have different effects they often affect the same part of the brain. Brain scans of drug users show that almost every drug triggers activity in the nucleus accumbems, a part of the brain where neural pathways from all over the body come together.

Recreational drugs are much more powerful than natural highs produced by chemicals in the brain and body. One dose of cocaine releases two to ten times the amount of dopamine produced by a natural stimulus such as favorite meal or song.

In a study by a team led by Prof. David Nutt of Britain’s Bristol University published in the British medical journal Lancet, alcohol and tobacco were ranked as worse than cannabis and ecstasy using a ranking system that took into consideration physical harms caused by a substance, the potential for addiction and cost to society from its use. In the study heroin and cocaine ranked as the most dangerous drugs followed by barbiturates and street methadone, Alcohol was listed as the fifth most harmful drug with tobacco coming in ninth. Cannabis was 11th. 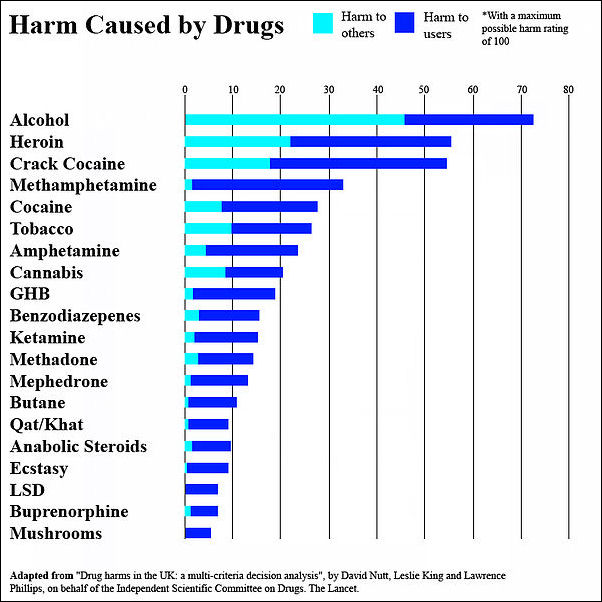 An estimated 200 million people, or about 5 percent of the world’s population, took illegal drugs worldwide in the late 2000s. This is roughly the same proportion as a decade earlier. [Source: The Economist]

People drink alcohol to have a good time; smoke marijuana to relax; take stimulants to stay away; take sedatives to sleep; and experiment with hallucinogens to expand their mind.

Drug researcher Valerie Curran of University College London told the Times of London, “Drug use is almost normative nowadays in the 18-30 age group. Most will take drugs for a while and come through at the end and have no problems. They are a different population to drug addicts. We should accept that people are going to take drugs and say: ‘Here is the science. Here is the risk-benefit profile. It’s your informed choice.’”

People everywhere, in rich countries and poor countries, take recreational drugs. While the vast majority of users take these drugs without harming anyone or themselves too much, so people abused them and become dependent on them and sometimes seriously hurt themselves and others.


Methamphetamine The annual global turnover from the illegal drug trade is estimated to be between $400 billion and $500 billion. This sum is larger than the individual gross national products of nearly 90 percent of the world’s countries. If alcohol is included it is estimated that the recreational drug market may be worth $2 trillion or more a year. [Source: The Economist]

According to the Economist, "The drug industry is simple and profitable. Its simplicity makes it relatively easy to organize; its profitability makes it hard to stop. At every level, its pricing and structure are shaped by the high level of risk from enforcement: the risk of seizure and jail." With the large profits involved, some drug experts assert that the drug problem is "insoluble."

Otherwise drugs are a business like most others: It requires capital, raw materials, reliable supplies, manufacturing, shipping, contractors, distributers, wholesalers, retailers and marketing. A particular emphasis is put on transportation, often the most risky and profitable part of the business. Much of the marketing is done by the retailers (the dealers).

The price of illegal substances is determined more by the cost of distribution than by production. The mark-up of cocaine from the time farmers are paid for their coca leaves to the time cocaine is sold on the street is a hundred fold. The street price is generally set by risks on smuggling the drugs into consumer countries not prices in places where they are produced.

The large gap between the cost of production and the price than consumers pay means that a lot of people along the production, trade and distribution chain get rich but they usually don't include the farmers.

Regionalism and the Illegal Drug Business


Crack cocaine As is true with terrorism, the drug production business thrives in places where the rule of law is weak, such as the outlying provinces of Afghanistan, Myanmar and Laos and rebel controlled territories in Columbia.

Matthew Brezinski wrote in the New York Times magazine: “The narcotics industry has adapted what may be called the Osama bin Laden approach to management: base your operation in a remote safe haven, the more war torn and chaotic the better; stay small and shifty; use specialized subcontractors or freelancers on a need-to-know basis; vary your routes and routines; and most importantly always insulate yourself with expendable intermediaries in case someone gets caught and talks.”

Immigrants often run the drug businesses in Europe and North America. They often have ties to the producers into their home countries, have a strong loyalty to members of their group and speak languages local police can’t understand.

The drug business is getting more efficient. This is reflected by the reduction in prices. On the street dealers are using techniques like micro branding: producing specific good for particularly niches. In New York, for example, dealers sell heroin in vials with color-coded plastic caps that indicate their purity, place of origin and price. An effort has also been made to make drugs affordable. Doses large enough to give people a good buzz often sell for as little as $20. 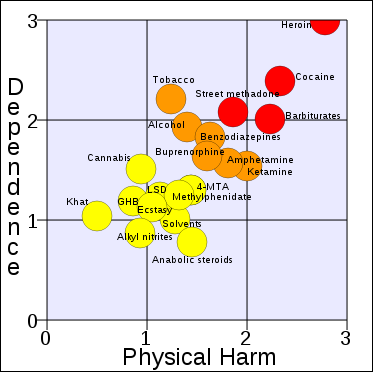 Heroin, cocaine, amphetamines, alcohol and nicotine are regarded as the five drugs hardest to give up. As of the late 2000s, 22 million Americans were hooked on at least one of these substances.

Drug-taking usually begins with a person taking the drug to get high. When addiction sets in the drug is taken just to feel normal. When addiction really takes hold consumption of the drug becomes instinctive, more important than food and more urgent and destructive and people need to take it to avoid pain and withdrawal.

Only about one in ten people that try an addictive drug actually become hooked on it. Geneticists have found gene variants that predispose people to addictions and that people vary in their innate sensitivity to dopamine. This partly explains why addiction seems to run in families. A gene that codes for a dopamine receptor designated D1 comes in several different types and concentrations of receptors. People with fewer receptors may receive less natural stimulation from dopamine and may feel a need to seek artificial highs from drugs. 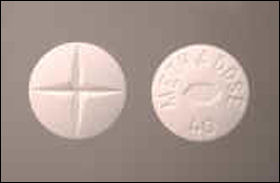 Methadone Researchers are increasingly looking upon addiction as a disease that can be cured with medicine. Seeking treatments that fiddle with the dopamine system are dangerous in that dopamine is also vital to voluntary movement and messing with that can can cause symptoms resembling Parkinson’s disease.

Vigabatrin is a drug that stimulates the production of Gamma-aminobutyric acid, or GABA, a neurotransmitter that has an inhibitory effect on neurons. In one study, 30 percent of the cocaine addicts that took it were able to stay off the drug, compared to just 5 percent in a control group. What was perhaps most remarkable about the treatment was that it was effective with people written off as hopeless addicts.

Camparal is drug that has been on the market for a while as a treatment for alcoholism. It suppresses the brain chemical glutamate which is linked to cravings for drugs.

Researchers are trying to develop a vaccine that would prevent drug users from getting high. An experimental cocaine vaccine is made of cocaine molecules attached to cholera-causing bacteria, which causes the immune system to respond by creating cocaine antibodies. If cocaine enters the body antibodies will bond to it preventing it from passing to the brain and triggering a buzz. Such a vaccine is already being studied under its first wave of large-scale clinical human trials. The same strategy is being used to develop vaccines for nicotine, heroin and methamphetamines.

Increased border and immigration security and the fight against terrorism since September 11th has made it tough for drug smugglers. Even so, most of the U.S. government's efforts to combat the supply of drugs has had little effect other than relocating and reorganizing production.

Most programs combating the drug supply are doomed because drugs are simply too profitable and there is not enough manpower or cover the vast areas where drugs are produced. With the wholesale price being so high, distributors can easily afford to pay growers more money if necessary without profits being affected too much. If authorities crack down in one place, distributors can use growers in other areas where are authorities not present. Local people are often reluctant to cooperate with anti-drug authorities operating in their area and often openly hostile to them for threatening their livelihoods.

Schemes to introduce other crops always have to address the problem that growers earn so much more growing drug-yielding plants than they can growing food or fiber crops.

The huge profits in the drug business provide money for huge slush funds used to bribe customs officers, policemen and other officials. Those that are bided usually have few other options. Either they accept the money or suffer retribution to themselves of their families.

In February 1909, the first ever international meeting to ban the trade of narcotics was held in Shanghai. Foreign diplomats that attended agreed to set up the International Opium Commission.

In 1988, the United Nations General Assembly committed member nations to achieving a “drug-free world” and to “eliminating or significantly reducing” the production if opium, cocaine and cannabis by 2008.

In March 2009, ministers from around the world gathered in Vienna to shape international drug policy for the 2010s.

The United States alone has spent $40 billion each year on trying to crack down on the drug trade. More than 1.3 million people are arrested each year on drug charges and a half million are put behind bars.

One of the must public advocates of drug legalization is The Economist magazine. In a 2009 article it called the 100-year war on drugs “illiberal, murderous and pointless... by any sensible measure,” adding the “least bad policy is to legalize drugs.” “Least bad” does not mean good. Legalization though clearly better for producer countries, would bring (different) risks to consumer countries...Many vulnerable drug-takers will suffer. But in our view, more would gain...There is no correlation between the harshness of drug laws and the incidence of drug-taking. Citizens living under tough regimes (notably the United States but also Britain ) take more drugs not fewer.”

“Imprisoning addicts and drug offenders takes up a lot of resources and it doesn’t accomplis much as the same drug offenders often appear again and again in courts and prisons. Drug seizures may drive up the price and reduce the purity but this does not seem to have much impact on drug use. The drug market quickly adapts to make up for disruptions. Effective crackdowns on production in one place simply force a shift to a new place. The current system doesn’t deter organized crime rather it provides a means for gangsters to earn billion of dollars as they did during prohibition.”

“Legalization,” the Economist article went on, “ would not only drive away the gangsters it would transform drugs from a law-and-order problem into a public health problem, which is how they ought to be treated. Governments would tax and regulate the drug trade, and use the funds raised (and the billions saved on law enforcement) to educate the public about the risks of drug-taking and to treat addiction. The sale of drugs to minors should remain banned. Different drugs would command different levels of of taxation and regulation. This system would be fiddly and imperfect, requiring constant monitoring and hard-to-measure trade offs. Most tax policies ought to be set at a level that would strike a balance between damping down use on one hand , and discouraging black market and desperate acts of theft and prostitution to which addicts now resort to feed their habits.” 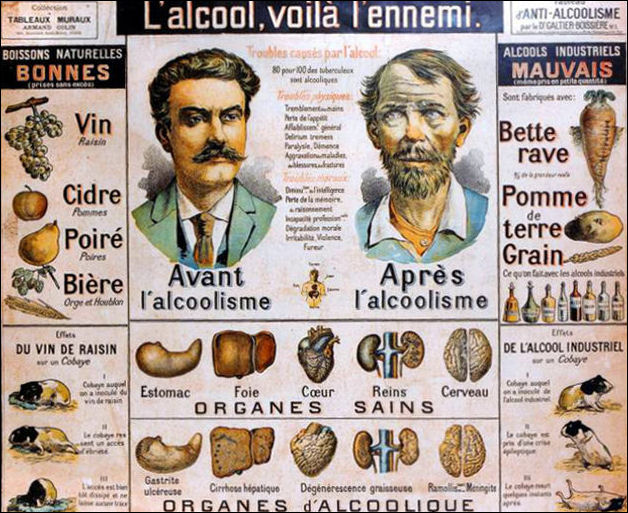