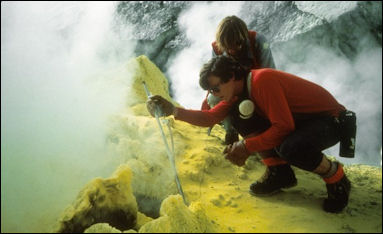 Collecting samples at a fumarole According to the Smithsonian: One of the most dangerous jobs in science has to be a volcanologist. But collecting and analyzing samples of lava and deadly gases are just a couple tools in the volcanologist’s box; here are some of the other—safer—ways they study volcanoes: 1) Measure seismic activity: Earthquakes are an early warning sign that something is going on underground with a volcano. The rumblings can be difficult to interpret, but an increase in activity often presages an eruption. [Source: Smithsonian website, July 28, 2011]

2) Measure ground movements: Scientists often set up sensitive tiltmeters that can detect the tiniest changes in the shape of a volcano’s surface. Before an eruption, the volcano may start to bulge as magma accumulates closer to the surface. Before Mount St. Helens erupted in 1980, the north side of the volcano visible bulged, but more often this deformation is detectable only with sophisticated equipment. 3) Take the volcano’s temperature: If a volcanologist wants to see how hot a volcano has become and which lava flows are newer (and hotter), there’s no need to get up close. A thermal imaging camera on an airplane or satellite can take a picture and identify the hot spots.

4) Check on its geophysical properties: Minute changes in the electrical conductivity, magnetic field and even gravity around a volcano can indicate that something is brewing beneath the surface. 5) Map it in three dimensions: A 3-D map of all the nooks and crannies on the surface of a volcano can help scientists make predictions about where the lava will flow and who is most in danger in the event of an eruption. 6) Study the volcano’s past: Scientists examine geologic deposits to learn about past eruptions, which can give important clues to what a volcano may do in the future.

Websites and Sources on Volcanoes: USGS Volcanoes volcanoes.usgs.gov ; Volcano World volcano.oregonstate.edu ; Volcanoes.com volcanoes.com ; Wikipedia Volcano article Wikipedia , Smithsonian Global Volcanism Program volcano.si.edu operated by the Smithsonian has descriptions of volcanoes around the globe and a catalog of over 8,000 eruptions in the last 10,000 years.;

It has been said that the science of "volcanology" originated with the accurate descriptions of the eruption of Vesuvius in A.D. 79 contained in two letters from Pliny the Younger to the Roman historian Tacitus. Pliny's letters also described the death of his uncle, Pliny the Elder, who was killed in the eruption. Actually, however, it was not until the 19th century that serious scientific inquiry into volcanic phenomena flourished as part of the general revolution in the physical and life sciences, including the new science of "geology." In 1847, an observatory was established on the flanks of Vesuvius, upslope from the site of Herculaneum, for the more or less continuous recording of the activity of the volcano that destroyed the city in A.D. 79. Still, through the first decade of the 20th century, the study of volcanoes by and large continued to be of an expeditionary nature, generally undertaken after the eruption had begun or the activity had ceased. [Source: USGS]


false color image of plume from
eruption of Eyjafjallajokull in Iceland

Perhaps "modern" volcanology began in 1912, when Thomas A. Jaggar, Head of the Geology Department of the Massachusetts Institute of Technology, founded the Hawaiian Volcano Observatory (HVO), located on the rim of Kilauea's caldera. Initially supported by an association of Honolulu businessmen, HVO began to conduct systematic and continuous monitoring of seismic activity preceding, accompanying, and following eruptions, as well as a wide variety of other geological, geophysical, and geochemical observations and investigations.

Between 1919 and 1948, HVO was administered by various Federal agencies (National Weather Service, U.S. Geological Survey, and National Park Service), and since 1948 it has been operated continuously by the Geological Survey as part of its Volcano Hazards Program. The more than 75 years of comprehensive investigations by HVO and other scientists in Hawaii have added substantially to our understanding of the eruptive mechanisms of Kilauea and Mauna Loa, two of the world's most active volcanoes. Moreover, the Hawaiian Volcano Observatory pioneered and refined most of the commonly used volcano-monitoring techniques presently employed by other observatories monitoring active volcanoes elsewhere, principally in Indonesia, Italy, Japan, Latin America, New Zealand, Lesser Antilles (Caribbean), Philippines, and Kamchatka (U .S.S.R.).

What does "volcano monitoring" actually involve? Basically, it is the keeping of a detailed "diary" of the changes — visible and invisible — in a volcano and its surroundings. Between eruptions, visible changes of importance to the scientists would include marked increase or decrease of steaming from known vents; emergence of new steaming areas; development of new ground cracks or widening of old ones; unusual or inexplicable withering of plant life; changes in the color of mineral deposits encrusting fumaroles; and any other directly observable, and often measurable, feature that might reflect a change in the state of the volcano. Of course, the "diary" keeping during eruptive activity presents additional tasks. Wherever and whenever they can do so safely, scientists document, in words and on film, the course of the eruption in detail; make temperature measurements of lava and gas; collect the eruptive products and gases for subsequent laboratory analysis; measure the heights of lava fountains or ash plumes; gage the flow rate of ash ejection or lava flows; and carry out other necessary observations and measurements to fully document and characterize the eruption. For each eruption, such documentation and data collection and analysis provide another building block in constructing a model of the characteristic behavior of a given volcano or type of eruption.

Volcano monitoring also involves the recording and analysis of volcanic phenomena not visible to the human eye, but measurable by precise and sophisticated instruments. These phenomena include ground movements, earthquakes (particularly those too small to be felt by people), variations in gas compositions, and deviations in local electrical and magnetic fields that respond to pressure and stresses caused by the subterranean magma movements.


Some common methods used to study invisible, volcano-related phenomena are based on: 1) Measurement of changes in the shape of the volcano — volcanoes gradually swell or "inflate" in building up to an eruption because of the influx of magma into the volcano's reservoir or "plumbing system"; with the onset of eruption, pressure is immediately relieved and the volcano rapidly shrinks or "deflates." A wide variety of instruments, including precise spirit-levels, electronic "tiltmeters, and electronic-laser beam instruments, can measure changes in the slope or "tilt" of the volcano or in vertical and horizontal distances with a precision of only a few parts in a million.

2) Precise determination of the location and magnitude of earthquakes by a well-designed seismic network — as the volcano inflates by the rise of magma, the enclosing rocks are deformed to the breaking point to accommodate magma movement. When the rock ultimately fails to permit continued magma ascent, earthquakes result. By carefully mapping out the variations with time in the locations and depths of earthquake foci, scientists in effect can track the subsurface movement of magma, horizontally and vertically.

3) Measurement of changes in volcanic-gas composition and in magnetic field — the rise of magma high into the volcanic edifice may allow some of the associated gases to escape along fractures, thereby causing the composition of the gases (measured at the surface) to differ from that usually measured when the volcano is quiescent and the magma is too deep to allow gas to escape. Changes in the Earth's magnetic field have been noted preceding and accompanying some eruptions, and such changes are believed to reflect temperature effects and/or the content of magnetic minerals in the magma.

Recording historic eruptions and modern volcano-monitoring in themselves are insufficient to fully determine the characteristic behavior of a volcano, because a time record of such information, though perhaps long in human terms, is much too short in geologic terms to permit reliable predictions of possible future behavior. A comprehensive investigation of any volcano must also include the careful, systematic mapping of the nature, volume, and distribution of the products of prehistoric eruptions, as well as the determination of their ages by modern isotopic and other dating methods. Research on the volcano's geologic past extends the data base for refined estimates of the recurrence intervals of active versus dormant periods in the history of the volcano. With such information in hand, scientists can construct so-called "volcanic hazards" maps that delineate the zones of greatest risk around the volcano and that designate which zones are particularly susceptible to certain types of volcanic hazards (lava flows, ash fall, toxic gases, mudflows and associated flooding, etc.).

Scientists at the State University of New York have used historical records, computer modeling and laboratory experiments to determine the most likely direction of lava flows and ash deposits to determine where damage will mostly likely occur.

Scientists studying processes behind eruptions have analyzed gases trapped in volcanic glass from Mt. Vesuvius and other volcanoes and examined sound patterns in earthquakes that precede eruptions and found that sound waves that occur at long intervals seems to hint to an explosive eruption while the waves that occur at short intervals are indicative of an earthquake.

Eruption are often preceded by earthquakes, the swelling of the ground on the volcano, an increases in gases released at the surface and increases of temperatures within the Earth. All these things can be observed with instruments or satellites. 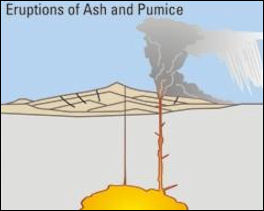 collapse phase of an eruption Scientists on the ground monitor temperature changes, gas levels and surface alterations for signs of an imminent eruption. Increases in mercury, radon, sulphur dioxide and carbon dioxide and the chlorine to sulphur ratio often indicate volcanic eruptions are imminent, but not always. Sometimes earthquakes occur and gas is released but there is no eruption. Often times nothing happened o when it doesn’t the scientists have given up and left or gone to sleep.

Scientists measure swelling and bulging on the surface of a volcano with ground-based devices called tiltmeters and satellite-based Interferometric Aperture Radar (InSAR). InSAR has observed “breathing volcanoes” that inflate and deflate without erupting.

Scientists in Japan have installed global positioning system (GPS) devices at 30 locations particularly active volcanoes and monitor changes in positions to predict eruptions. The instrument are so sensitive that scientists can gage activity in a magma chamber seven kilometers below the surface. The are mainly looking for swelling on the mountains that occurs before an eruption.

Although volcanic eruptions are much easier to predict than earthquakes how the eruption plays out, how it intense it will be and how long it will last is much harder to predict.

Scientist rely primarily on past performance to predict future activity of a given volcano. A strikingly successful example of volcano research and volcanic hazard assessment was the 1978 publication (Bulletin 1383-C) by two Geological Survey scientists, Dwight Crandell and Donal Mullineaux, who concluded that Mount St. Helens was the Cascade volcano most frequently active in the past 4,500 years and the one most likely to reawaken to erupt, "...perhaps before the end of this century." Their prediction came true when Mount St. Helens rumbled back to life in March of 1980. Intermittent explosions of ash and steam and periodic formation of short-lived lava domes continued throughout the decade. Analysis of the volcano's past behavior indicates that this kind of eruptive activity may continue for years or decades, but another catastrophic eruption like that of May 18, 1980, is unlikely to occur soon.

To control mudflows, like the one that killed 23,000 villagers in 1985 in Columbia, the Japanese government has erected steel and concrete silt dams along likely mud flow routes to halt, or a least, slow down their advance so people have enough time to be evacuated. Television cameras and sensitive instruments that take 11 different readings are also used for research and detection.