Silkworm cocoons Silk is a wonderfully strong, light, soft, and sensuous fabric produced from cocoons of the Bombyx caterpillar, or silkworm. Of all the fabrics, silk is regarded as the finest and most beautiful. It has a wonderful sheen — the result of triangle-shaped fibers that reflect light like prisms and layers of protein that build up to a pearly sheen — and can be dyed a host of wonderful colors. The late fashion editor of the Washington Post Nina Hyde wrote, “Designers revel in its feel, its look, even its smell." [Source: Nina Hyde, National Geographic, January 1984, ╟]

Intricately embroidered brocades have traditionally been greatly prized in Japan. “Nishijin-ori” is the name of the 500-year-old craft of silk weaving that was centered primarily in Kyoto. The are several hundred classifications of Nishin-ori weaves and patterns. Common images include cranes, flowers and geometric patterns. Master weavers can recreate a Van Gogh painting with silk thread.

Some of the most beautiful weaves include “Shokkokin”, a vivid rubicund weave originating from Changjiang, China; “Rikyubai”, a gold pattern modeled after the Japanese apricot; “Monjiro”, an ivory weave used by Buddhist priests; “Itoya-rinpo”, a beautiful circular pattern; and “Shikami-Monchohankon”, a pattern with a teeth-baring lion modeled after images on Chinese bronzeware from the 16th century B.C.

Silk can be used for all sorts of things. In addition to being woven into fabric, it has been made into cold cream in China, beauty powder and parachutes in the United States, teeth braces in Italy and fishing nets around the world. Bicycle racers say that tires made with silk give them a smoother ride and better traction. Skiers like it because it wicks away moisture and scientist say silk is stronger than steel. In Japan silk artists are revered as national treasures. In India corpses are covered with silk shrouds as a sign of respect. Frugal Ben Franklin splurged on a silk kite for his famous electricity experiments and the first French atomic bomb was dropped from balloon made partly of silk.╟


8th century Sogdian silk According to a Chinese legend, silk was discovered in 2460 B.C. by the 14-year-old Chinese Empress Xi Ling Shi who lived in a palace with a garden with many mulberry trees. One day she took a cocoon from one of the trees and accidently dropped it hot water and found she could unwind the shimmering thread from pliable cocoon. For hundreds of years after that only the Chinese royal family was allowed to wear silk. Xi Ling Shi is now honored as the goddess of silk.

The oldest concrete evidence silk weaving are impressions found on a bronze urn dated to 1330 B.C. The provincial museum in Hangzhou houses silk threads and embroidery knots that may be 4,500 years old. In 1982 brickyard workers stumbled across a ancient tomb from 300 B.C. with remarkably well preserved silk quilts and gowns. ╟

The secret of making silk remained in China for 2,000 years. Imperial law decreed death by torture to those who disclosed it. No one is sure when the secret first seeped out of China, but it is known to have reached Japan by way of Korea by the A.D. forth century and said to have been brought there by four Chinese girls. It is also said that silk was brought to India by a Chinese princess who hid eggs and mulberry seeds in the lining of her head dress.

History of Silk in Japan 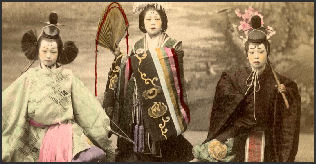 19th century dancing girls Printed silks from the 8th century survive from an 8th century palace in Nara. The traditional, Japanse, multi-storied, thatch-roof homes contained an attic at the top to keep mulberry-leave-munching silkworms. The Empress of Japan still feeds silkworms on the palace grounds each spring.

For a long period of time Japan produced the best quality silks in the world, better than those produced in China. In the 19th century silkworm eggs from Japan that were resistant to the rare disease of tacherie, silkworm Nosema disease and flacheriem, as confirmed in a report by Louis Pasteur in 1865, saved the silk industry in Europe.

Much of heir early engagement between Japan and France revolved around the silk trade. In the 18th and 19th centuries, Lyon, France was a major center of silk and textile production center. For a while the purchase of silkworm eggs and raw silk from Japan by France accounted for more than half the world’s production.

Before World War II, the export of silk was a major source of foreign currency. In the 1920 and 30s, before nylon was invented, Japan supplied much of the silk used to make silk stockings. The silk industry boomed in Japan in the late 1960s and early 1970s when women who never had money before all of sudden had to buy not just one but several silk kimonos. Dried cocoon futures reached its peak in 1969.

By the end of the 1970s the silk market was in decline as Japanese women became interested in Western clothing. The silkworm business has virtually collapsed due to competition from China and improved quality of synthetic fibers. Japan’s last silk spinning factory closed in April 2003. Trading ended in March 2004 due to dwindling local silk production.

Prof. Masao Makagaki, an insect geneticist at the Shinshu University in Nagano Prefecture, developed a super-strong “spider silk” by inserting spider thread genes into silkworm eggs. Socks made with the material are slated to put the market in 2010. Researchers are also working making fishing line and surgery sutures with it.

Rumors and the History of Silk in Japan

The silk industry in Japan was dealt a serious blow by the invention of nylon in the United States before World War II. Henshu Techo wrote in the Yomiuri Shimbun: “People told a story about the origin of the synthetic fiber's name as if it were true. They said it was an acronym that people in the U.S. textile industry, which had been waging an uphill battle against the advancement of Japanese silk, shouted in exultation: Now You Laugh Old Nippon. [Source: Henshu Techo, Yomiuri Shimbun, July 17 2012]

“Japanese literature scholar Yasaburo Ikeda wrote about this story in "Nihon Koji Monogatari" (Stories of historical events in Japan) published by Kawade Shobo Shinsha Publishers Inc. The story was nothing but a popular belief, but it well illustrates how the Japanese silk industry, which led the modernization of this country like a locomotive, had been enjoying prosperity. [Ibid]

“It has been reported that a symbol of the silk industry, the Tomioka Silk Mill in Tomioka, Gunma Prefecture, will be recommended by the government to UNESCO for designation as a World Cultural Heritage Site. It was established in 1872 as a public-run model factory by the government, which was rushing to promote industrial development. [Ibid]

“A reckless rumor spread at that time, probably due to imagination about the red wine foreign engineers drank: If you work at the mill, your blood will be taken out. The government thus faced difficulty in recruiting workers for the mill. This anecdote evokes how things were in the past. The red brick building still stands there as though resting in the afterglow of history's sunset. [Ibid]


Silk production is largely automated and done in factories but the raising of silk worms to make silk is still very a “cottage industry” done primarily at people’s homes. In some cases government provides anyone who is willing to raise silkworms with 20 kilograms of very small silkworm grubs, which are placed in special boxes in special rooms and fed mulberry leaves gathered from trees near the homes of the farmers raising them.

Gumma Prefecture has traditionally been Japan's principal silk producing region. When the silk industry was at its peak Gumma's 25,000 silk raising houses produced more than 40 percent of Japan's silk. Now there are less than 1,000 silk-raising houses.

Everything in a Japanese silk factories was mechanized even the plucking of mulberry leaves. The work place was as sterile as a silicon chip plant, with humidity, airflow, and temperature are all monitored five times a day. Visitors to silk factory were required to wash in a soupy solution tinged with formaldehyde and and wear a starched scrub suit and a gauze face mask. Looms were driven by computers. [Source: Nina Hyde, National Geographic, January 1984]

In the 1980s, more than a billion caterpillars at a silkworm station in Tokorozawa, Japan crawled and fed on blocks of man-made, mulberry-leaf-soybean-cornstarch concentrate, which looked like "granola bars." Caterpillars that refused to eat were prodded with a feather in the direction of their meal. A Japanese physiologist who helped devise the diet, told National Geographic, "It is much easier to prepare food for a person than a silkworm." Over 50 percent of Japan's silkworms were raised this way. [Source: Hyde]

The Gumma Sericultural Experiment Station has breed silkworms that produce pink, yellow, orange, blue, purple and green silks. To achieve this the silkworms are fed dyes mixed with ground mulberry leaves. The colors they eat don't always match up with the colors they produce. To achieve purple the silkworms are fed food mixed with red and blue dye. Colored silk produced in this way is better than died silk because its is dyed to the core and has a more natural color.

These days silkworm technology is being applied to genetic engineering and biotechnology. The National Institute of Agrobiological Sciences in Tsukuba, Ibaraki Prefecture has genetically engineered silkworms with genes that cause fluorescence in jellyfish and coral and manipulated them to produce interferon, a medicine used to treat a number of ailments. Japan is a leader in the race to decode the silkworm genome.