HISTORY OF OPIUM IN CHINA

ARRIVAL OF OPIUM IN CHINA


19th century opium smoker Opium is an addictive narcotic made from the dried, bitter, thickened latex of the seed pod a certain kinds of poppies. Used as a medicine and painkiller and for recreation, it can be smoked, eaten, drunk or made into more powerful drugs such as morphine and heroin. About 10 kilograms of opium produces one kilogram of morphine which yields one kilogram of heroin.

The flower Papaver somniferum is used in the legal and illegal opium trade. Believed to be native to the Mediterranean area, it was used by the ancient Mesopotamians and Egyptians.and introduced to Persia and India by Alexander the Great in 330 B.C.

Some scholars believe that opium was brought to China by returning sailors or Tibetan Buddhist priests from Africa or India as the early as the first century B.C. Others say that opium more likely was carried east by Arabic traders to India and then China between A.D. 400 and A.D. 900. By the reign of Kublai Khan (1279-94) opium was widely used as a medicine. Between 1000 and 1500 the Chinese graduated from consuming poppy seeds to taking raw opium from the capsules and refining it into high quality opium. In southern China hill tribes began raising opium as a way to pay taxes to the Han Chinese. 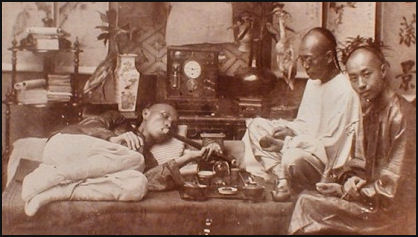 Isabel Hilton wrote in The Guardian, “Opium had been consumed in China since the eighth century and several emperors had sung its praises. It began to be smoked with the introduction of tobacco in the late 16th century, turning its consumption from a medicinal to a social habit. By the 1830s, China was producing large quantities of opium domestically, though the imported drug was judged superior. The British traders argued, disingenuously no doubt, that they were merely supplying an existing demand, delivering the opium to a network of Chinese traders who distributed it across the empire. “[Source: Isabel Hilton, The Guardian, September 11, 2011]

Until the practice of smoking tobacco was introduced to Europe and Asia from the Americas in the 16th century, opium was mostly eaten or drunk. Opium smoked in the 17th and 18th century was mostly in the form of a mixture of opium and tobacco called madak. Smoking pure opium only became popular in China after madak was banned there. By 1700, the use of tobacco-opium mixtures (madak) had begun in the East Indies (probably Java) and had spread to Formosa, Fukien and the South China coast. In 1689, Engelberg Kaempfer inspected primitive dens where the mixture is dispensed (Amoenitates Exoticae, 1712:642-5).

In the 1600s, the habit of smoking opium became popular in Formosa (now Taiwan) after Dutch sailors introduced tobacco smoking and residents of the island mixed tobacco and opium. The Formosans introduced the custom to the mainland, where tobacco was abandoned and opium was smoked alone. In 1729, reports reach Peking of the evils of opium smoking (shrivelling up the features; early deaths) in Formosa and Fukien and Chinese Emperor Yongzheng (1678-1735) issued an edict prohibiting the smoking of opium and its domestic sale, except under license for use as medicine, and closed down smoking houses. [Source: Erowid.org]

British and the Growth of Opium Use in China


French opium den The quality of the opium produced in China was inferior to the opium brought from India by the British. Opium from Bengal continues to enter China despite the edict of 1729 prohibiting smoking. It increased in frequency from 200 chests annually in 1729 to 1000 annually by 1767. Much of it was for medicinal use. Tariffs were collected on the opium.In 1757, when Britain annexed Bengal, the Chinese confined foreign trade to Canton where it could be restricted and controlled in the interests of revenue for the Chinese. Hong Kong merchants serve as intermediaries between the foreigners and the Chinese authorities. [Source: Erowid.org]

The first mention of actual trading in opium at Canton was in 1779. In 1780, British traders established an opium depot at Macao. Another imperial edict prohibited consumption of opium and reiterates prohibition of its sale. In 1796, alarmed by increasing use, the emperor of China issued an edict forbidding importation of opium, as well as export of Chinese silver was that was being used as a medium of exchange. Now even legitimate trade was limited to barter. Nonetheless, illegal purchase of opium with silver continued.

In 1799, Chinese Emperor Jiaqing (1760-1820) banned opium completely, making trade and poppy cultivation illegal. A strong edict by authorities at Canton, supporting the emperor's decree of 1796, forbid opium trade at that port. A concurrent drive against native poppy growing was initiated. Opium became an illicit commodity. The 1799 edict increased traffic through Macao and other areas beyond government control enabling unprecedented growth. The British declared only their legitimate cargo, leaving opium on board to be picked up by Chinese merchants who smuggled it ashore in small, fast boats. In 1800, opium became identified with official corruption, criminals and antigovernment secret societies. An imperial edict prohibited domestic cultivation and repeated the prohibition against importing opium. China developed an anti-opium policy, at least on paper. Edicts continued to be issued reiterating prohibitions against importation, sale, and consumption of opium.In 1804, opium trading resumed at the port of Canton. Though the 1799 edict was still in force, it had little effect and no immediate practical change in policy ensued.

In 1839, Lin Tse-Hsu, the imperial Chinese commissioner in charge of suppressing the opium traffic in China, ordered all foreign traders to surrender their opium. In response, the British sent a group of warships to the coast of China, triggering the First Opium War, which the British won in 1841. Along with paying a large indemnity, the defeated Chinese ceded Hong Kong to the British. In 1856, hostilities towards China were renewed, this time by the British and French, resulting in the Second Opium War, which China again lost. After this China was forced to pay more indemnity and the importation of opium to China was legalized.

Later History of Opium in China

After the Opium Wars, the British aggressively marketed opium in China. The result: lots of addicts. Some smoked the drug in opium dens. Others took opium pills. Cheap pills known as pen yen gave rise to the expression have a "yen" for something. Between 1850 and 1865. Tens of thousands of Chinese laborers migrate to the U.S. during a labor shortage there, bringing the habit of opium smoking with them. See Below

In 1900-1906, it was estimated that 27 percent of the adult male population of China was addicted to opium. This was about 3.5 percent of the total population of the country. It wasn’t until 1906 that Britain and China enacted a treaty restricting the Sino-Indian opium trade. In 1910, after 150 years of trying, China was finally successful in convincing the British to dismantle the India-China opium trade. By that time China had plenty of other sources for the drug, particularly in Southeast Asia.

End of Opium Use by the Communists

In 1940 it was estimated that there were 40 million opium smokers in China. In 1941 Chiang Kai-shek ordered the complete suppression of the poppy and laws were passed that meted at the death penalty for anyone cultivating the poppy, manufacturing opium or offering it for sale.

The Communist took this policy a step further by executing dealers, declaring that anybody found using drugs would be put to death. and providing immediate cold turkey treatment for addicts. In Canton in 1951, 27,000 pounds of opium was publicly burned and 37 addicts were executed. In this way the Communist virtually wiped out drug use and brought the opium problem to a quick end. Even so, while fighting the Kuomingtan, the People's Liberation Army, operating under the front of the Daguang Soap Factory, grew opium to raise money in the early 1940s apparently with Mao's approval.

In the 1990s, the Yves Saint Laurent perfume Opium was banned because is name "humiliates Chinese dignity." The ban was imposed after shoppers complained that the perfume "created spiritual pollution for the youngest.” In the early 2000s, hot-pot restaurants in Shanghai were accused of adding opium to their dishes in an effort to get repeat customers.