hunter By one estimate 1.2 billion people worldwide depend on the forest for their livelihood. The large number of poor people in tropical areas presents one of the great challenges to improving reforestation efforts and forest management. Pekka Kauppi of the University of Helsinki and one of the authors of the above study told the Times of London, “The main obstacles to forest transition are fast-growing poor populations who burn wood to cook, sell it for quick cash and clear forest for crops. Harvesting biomass for fuel also forestalls the restoration of land to nature. Through paper recycling and a growing reliance on electronic communication, people help the transition by lessening demand for wood products.”

In the Amazon settlers often work the land for a few years and then sell it off or abandon it. Often they are followed by cattle ranchers whose herds can feed on vegetation that grows on depleted land and by soy bean farmers that can afford chemical fertilizers. Prices of beef and soybeans are primary forces behind deforestation. When they go up so too does deforestation.


deforested land Cacao, the source of chocolate, can be grown in a rainforest. Most crops however require the forest to be cut down so there is enough sunlight for the crops to grow.

Yerba Mate, the source of tea-like drink popular in Argentina, grows well in rainforests that have been partially cleared. In Paraguay a company called Guayaki is raising yerba mate on partially deforested land through a partnership with the Ache Guayaki, an indigenous group in eastern Paraguay.

In many cases it is unclear who actually owns the owns the rainforest. A couple of decades ago Brazil began selling huge swaths of land, mostly to foreign companies, to develop.

Book: The Private Life of Plants: A Natural History of Plant Behavior by David Attenborough (Princeton University Press, 1997); Portraits of the Rainforest By Adrian Forsythe. 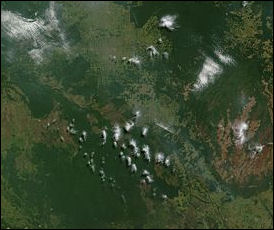 Satellite image of Bolivia in June 2002 Slash and burn agriculture is a method of cultivation in which crops are grown on a plot of land, and the crop remains or overgrowth are burned off after the harvest so the ashes can provide fertilizer for new crops. "Slash" refers to the practice of cutting down small trees, vines and shrubs during the clearing process. "Burn" refers to burning them.

Slash and burn agriculture is also known as impermanent field agriculture, shifting cultivation, swidden, bush fallowing, milpa (in Mexico and Central America), ladang (in Indonesia), caingin (in the Philippines) and citemene (in parts of Africa).

Worldwide slash and burn farming destroys 50 acres of rainforest an hour. The end of the dry season, right before the first rains and the beginning of the planting season, is generally when the slashing and burning is done. At that tome of the year the air a smokey and hazy in the day and lines of fire snake across the hills at night. From the air you can the fires are visible across the landscape and the smoke is as thick as clouds.

Machinery doesn't work very well in rainforest agriculture. For the machines to work crops have to be harvested before the rainy season begins. Even with canals to drain the water combines and harvester get bogged down in the mud like German tanks in springtime Russia. 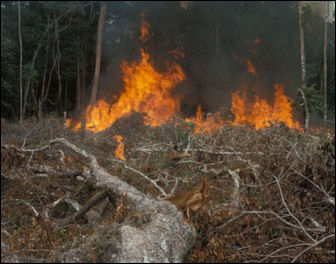 swidden fire Slash and burn agriculture is really the only way to grow crops in the rainforest. If properly done it is sustainable and doesn’t damage the environment all that much. They keys to success are: 1) avoiding land with soils that erode easily; 2) periodically allowing the land to lie fallow for several years to regenerate nutrients; and 3) inter-croping fields with a variety of plants that provide nutrient and replicate the multi-storied conditions in rainforests.

In Melanesia, slash and burn agriculturalists terrace and irrigate their land but still let lie fallow for long periods of time so it can regenerate. With Caribbean Creole method of slash and burn agriculture, rice and beans are grown for two years until soil becomes depleted then farmers plant coconut and banana trees which last another five years. After this, the fields lie fallow and become overgrown with bush for 15 years, after which time the bush is burned and cleared, starting the entire process over gain.

Slash and burn agriculture is an effective way for farmers to utilize the tropical rain forest if the population density is low and the forests are allowed to lie fallow for at least 25 years. Indigenous people tend practice sound slash and burn techniques because they have a lot of experience working the land and long term interests on mind while new settlers and subsistence farmers have less experience and are more concerned with their short term needs. 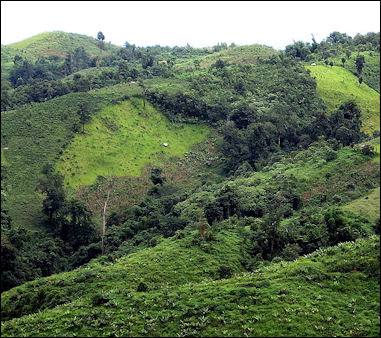 Swidden agriculture in Yunnan, China Slash and burn agriculture was first described by anthropologists with the swidden agriculturalists of New Guinea. Ancient "hunter gatherers" in Melanesia and Australia practiced a primitive form of agriculture in which they burned off vegetation so that food-producing palm-like cycads could grow and produce seeds.

Traditional gardens of the people of Papua New Guinea look like a tangled mess of vines, shrubs and trees. In actuality though they are carefully-and well- managed plots with over 40 food-providing plant such as sugars, yams, grains, spices, bananas, fruits as well as tobacco and medicinal herbs. By intercropping the people take advantage of different state in the rainforest and produce food that can be harvested year round.

Traditional New Guinean slash and burn farmers let their fields lie fallow for a minimum of 15 years and often wait for 40 years before replanting. The rainforest gardens required only 9.5 hours of work each week and the yields enough surplus food to raise pigs.

Highlanders who have switched from traditional swidden agriculture to large scale farming devote as much as 75 percent of their land to the harvesting of sweet potatoes in gardens that are cultivated continuously for 15 to 20 years. Even the swidden plots have been left fallow for only two to five years. As a result production was low as nutrients in the soil were depleted.

The childbirth pattens in the highlands follow the cropping cycle. Most children are conceived in March when food is plentiful. Unfortunately the last couple of months of pregnancy coincide with a period of time when food is in short supply and women are laboring in the fields planting the next crop. During this time pregnant women are found to be receiving just 31 percent of the energy, 49 percent of the protein, and 41 percent of the iron requirements recommended for a pregnant woman.

Slash and burn agriculturalists today often continue cultivated the same plot of land until it is exhausted and in some cases unreclaimable as agricultural land. Then they often simply go off into the forest and slash and burn another plot and exhaust that.

The shallow, poor rainforest soil is good for about three crops at most. High yields of corn, cassava, beans, yams, squash and other crops can be obtained for one or two seasons. But after that the soil erodes away, the ash fertilizers is leached away by rainfall and garden plots are covered with weeds that move in from the uncut forest. The crops of farmers working on sloped land often fail even sooner because what little soil is there is quickly is eroded after land is cleared.

After the land is exhausted for agriculture grasses are allowed to grow for cattle grazing or simple abandoned. After a time the grasses and plants that grow often fail as the clay left behind from the depleted soil bakes in the sun, cracking and turning as hard as concrete. During the rainy season slopes erode, and rivers silt and flood. Without the trees even rainfall starts to become erratic.

Environmentalists argue that the root cause of the problems is that peasant have no right to own land. If they did they would tale care of the land, instead of exploiting it until it is no longer valuable and then moving on to new land. 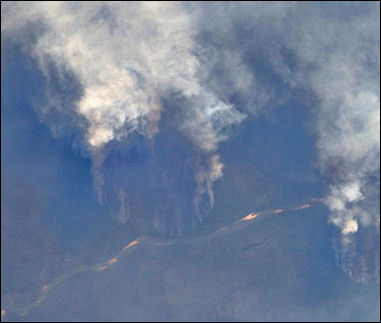 Fires along the Rio Xingu Brazil Slash and burn farmers different crops in different regions. Those is Asia grow dry-land-rice, bananas, and corn. In Latin America, they grow corns, beans and squash. In Africa, corn and cassava. Even so their technique are often very similar. On a typical plot of land, first the trees are cut and torched. The nutrient rich ash is used to fertilize the soil. Stumps are easier to pull in the rainforest than other places because the soil is shallow and the roots aren't very deep. Still, they are usually left in the field until they rot because they are difficult to move without a bulldozer.

Burning is usually done just before the onset of the rainy season. "Slash and burn" agriculturists often don't have to slash the vegetation because the underbrush is so dry that it burns quickly and ferociously. They have to be careful, however, that the fire doesn't spread. The layer of ash created acts as a fertilizer. The more ash that higher the yield; the longer the plot is left fallow and plants and trees are allowed to grow the more wood there is to get ash from.

Crops are often planted directly into the ash-covered soil in holes or small mounds without any tilling. If stumps are present farmers imply plant around them. Farmers spare the palm trees, which they use for roof thatch. Otherwise they usually cut down all the trees on their land, even though only a few can be sold for their timber, because it easier to plant that way.


miner shantytown A large number of trees are cut down for agriculture and firewood. Most peasants can't afford kerosene for cooking stoves and, for the most part, they don't raise animals like cows which can provide them with dung, a fuel used in many other parts of the world. That leaves firewood and charcoal as the most accessible and inexpensive fuels for cooking and heating water.

Trees are cut down in deforested areas mainly for fuel and charcoal and to make way for agricultural land. In many places forest have been replaced by expanses of elephant grass and eroded gullies and rocky ravines.

Floods and landslides kill lots of people. Erosion and deforestation caused by loggers and villagers collecting firewood and practicing slash and burn agriculture exacerbate the problem. In prehistoric times the land was covered with forests, but these trees were cut down long ago.

Deforestation in some countries has been exacerbated by land reform legislation passed that allowed people to claim undeveloped land if they cleared it and put it into production.

A considerable amount of rainforest timber ends up as charcoal. One Amazon settler who sells four-dollar, 50-kilogram bags of charcoal made from cut down trees told the Los Angeles Times, ?I know its wrong to cut down the trees. But I have no other way to make a living.”

Charcoal is the porous, black brittle substance produced when woods or bones are partially burned. It is an impure variety of carbon, which is able to absorb large quantities of gases. Charcoal production and use creates greenhouse gases.

Charcoal is preferred to wood because it is slow burning, produces little ash, gives off relatively little smoke, produces a hot even heat ideal for cooking, and is easy to transport.

Charcoal is made by slowly burning hardwoods for three days under a blanket of wet leaves and earth. It is a dirty process. Using the traditional method, wood is placed in a pit in a pyramid-like pile and covered by the earth-leaves blanket. Holes were left at the bottom for air to enter and at the top for a chimney.