Tang camel with a rider

Camels serve humans as beasts of burden, transportation sources, desert companions, source of pride, measures of wealth and heroes in poems and legends. They provide milk and, for the occasional feast, meat. From its wool women weave blankets and rugs; its hide is turned into sandals, candles and buckets. Camel dung fires are a source of heat and used for cooking.

Camels are mentioned in the Koran and regarded by Bedouins as “God’s gift.” In the desert some people worry more about the well-being of their camels than they do of their own children. But camels are not necessarily pleasant animals. They make screechy noises, have smelly bodies and always seem to be dozing off or refusing to cooperate but are the fastest animals in the desert and steppes, and have incredible endurance.

Camels have never been very good as military animals although special camels called “mehari” have been bred for warfare and racing. These animal can travel 75 to 120 miles a day at a steady trot of 9 to 10 miles per hour. Otherwise camels are good at endurance but slow and unwieldy as mounts for soldiers. In warfare they were good for crossing deserts but not good cavalry animals.

Camels are ideal for desert caravans because they can go longs times without water and can travel long distances between pastures. They allow caravans to set up their camps far from water sources. They are also invaluable because they can be used to transport water from wells to camps and stay mobile and move to good grazing areas.

Camels Products and Camels as Pack Animals and Working Animals

Camels produces meat, milk, leather and wool. Because they reproduce slowly and have long gestation periods camels are not considered a good source of meat or milk. Goats and sheep are much more efficient protein providers.

Camel hair is used to make felt, brushes, and a variety of woolen products. The fine camel hair used for quality overcoats and suits comes from Bactrian camels. The finest quality hair is the short silky down that grows next to the skin. A camel also produces 500 pounds of camel dung fuel a year.

Camels can carry anything that can be loaded on their backs. In remote areas of the Sahara solar powered refrigerators filled with vaccines have carried on the backs of camels.

The expression the straw that broke the camel's back can be traced back to Greek historian Pliny the Elder who believed that camels trained to carry a certain load couldn't carry one straw more.

Blindfolded camels are sometimes hitched to waterwheel and other devises instead of oxen or water buffalo. In some place you can still find police and soldiers who perform their duties on camel back.

Camel riders have described their animals as truculent and unruly. Camels kick, wine, bellow, bite and spit putrid green saliva. They make a particular ruckus when they are coerced into kneeling. They often get up snapping and snarling when they are loaded down with too much stuff. The get camels to kneel they are often whacked on the head.

"For sheer stubbornness, bad manners and cursedness, the camel is without peer," Franz Lidz wrote in Sports Illustrated. "The haughty creature commonly shows disdain for racing by rearing its head and discouraging the contents of its stomach on the rider. Every race, there are always a few camels that refuse to budge; one even stopped dead a couple of yards from the finish line.”

Some camels are more ornery than others. And even agreeable animals have bad days when they are grumpy and stubborn. The camels often fight among themselves for their share of food. Aggressive camels bite their rivals in the withers. Sometimes the whither wounds are so severe that the camel is unable to be saddled or loaded up.

Camels are usually kept occupied because when they are left to their own devices they often do things that are mischievous or obnoxious. When camels begin acting particularly erratically, their behavior is often blamed on evil spirits. When this happens the only thing one can do is keeping moving and get of the spirit’s range.

A camel is steered or controlled with a wooden nose peg that is drilled through its flesh or a metal ring that is jabbed though the camel's upper lip or nose. Camels are tethered using their nose rings and saddles.

Camels are marched in single file in groups of about six. Pack camels will not go forward unless someone or something is leading them.

Camel herders punch their animals on the rubbery noses to earn respect from their animals. They whip their camels to make them kneel or go forward. A camel prod is as long as a walking stick and is crooked at the end.

Camels are hobbled with a rope tied between their legs to keep them from straying. Sometimes a knee is bent and a rope is tied around it. An entire herd can be hobbled in about 20 minutes.

Getting On and Off a Camel

You don't mount a camel like you do a horse. When camel crouches on the ground you climb over the hump, sit on the saddle and grab the saddle pommel and hold on tight. When the animal lurches upwards — first on hind legs and then on it fronts legs — you first lean back, then forward, and back and forth again in the opposite direction of the camel. On the initial rise make sure you are leaning backwards so you don’t fall over the camel’s head.

A “sh sh sh” command brings camels to the ground. Grabbing the saddle pommel to the “zzt zzt“ command is supposed to make the animal rise but often a whip or a sharp whack is the only thing that will get the animal off the ground. Even then there is often a lot groaning, bellowing and even spitting and biting.

When you get off, hold on tight as the camel goes into its crouch. The camel drops to its front legs first and then its back legs so be prepared to be thrown forward and then backwards. After ride on a camel many people feel a little wobbly.


Bactrian camel Camels are a valuable source of food when crops or food sources fail. I many places that rely on camels, camel meat is not normally eaten, but in cases of emergency or famine or when an animal dies suddenly they will be eaten. On long caravans that get into trouble camel meat has often meant the difference between life and death.

Muslims are specifically allowed to eat camel meat. Muslims have traditionally consumed camel milk and eaten the animals for emergency supplies of meat or when an animal dies. According to one Kenyan tribesmen camel meat tastes salty, sweet and soft like ibex, kudu, or wildebeest. Fat from the hump is used in place of butter.

Crippled camels and camels broken legs are slaughtered and eaten. Fouls given birth are sold if possible or sometimes killed. Describing the killing and slaughtering of a camel, Louis Werner wrote in Smithsonian magazine,"We arrived at the scene just in time to see the squatting camel pinned to ground with its neck pulled out taut by the rein and the knife make a 180-degree slash on its underside. The body strained backward, the eyes bulged and blood sprayed over the sand for yards. When the heart had pumped the body nearly dry, the skin was laid open on either side like a picnic cloth and four men undressed the corpse with flashing blades. The ring of onlookers shouted instructions, and finally such choice parts as the hump fat, chest callus, hoof jelly and liver emerged from the shrunken carcass. each of us had a share of the liver and hump, still hot and raw. Our drivers collected their quarter-side of camel and returned to the herd. [Source:Louis Werner, Smithsonian magazine, March 1987] 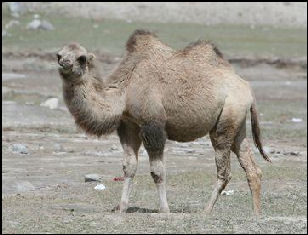 In desert areas camels often provide more milk than cattle. Nomads prize lactating camels. Female camels generally continue to produce 2½ gallons of milk a day in the wet season and around a gallon a day in the dry season for a year and half after they give birth (a cow by contrast only lactates for seven to nine months and gives between a pint and two quarts a day).

Even when water is scarce or brackish or there is a drought, camels continue to produce milk. Baby camels are often killed and their skins are hung to keep the she-camels producing milk.

Milk is taken from hobbled she-camels with a leather bowl. A camel's two teats must be milked at the same time or else one will retract out of reach. Describing the milking of a camel, Thomas Allen wrote in National Geographic: "She wrapped a rope around the camel's back legs and tightened the rope by bracing her knee against the camel's rump. She led a nursing camel up to the female and, as soon as the baby camel began nursing, yanked it away. The woman then began milking the camel, squirting the milk into a dirty tin can." Camel-udder covers prevent baby camels from nursing whenever they feel like it.