In May 2009, a 1.5-meter-long Siamese crocodile was left at an animal shelter in Chiba with a note that said, “My work contract ended in March, I’ve no money and can’t support him. His name is Gen”.

Mini pigs, miniaturized versions of regular livestock pigs, were sort of trendy for a while with women. Selling for about $800 in Tokyo pet stores, they reached a weight of about 30 to 50 kilograms and became popular after the film Babe. As of 2002, there were about 300 or 400 of them in Japan.

In Japan, there are concerns that imported pets, both legal and illegal ones, can bring in diseases or pests that can affect humans, animals and agriculture. One study found that 12 species of imported pet carried leptospira, a disease that causes fever, jaundice, blood in the urine and inflammation of the kidneys. Many animals from the Americas carry giardia. Some from Asia carry salmonella.

In pigeon racing circles there are stories of races in Japan and Taiwan where pigeon races are rich and winners can earn $3 million. There are also stories of races being compromised by competitors raising huge nets to stop rival birds. 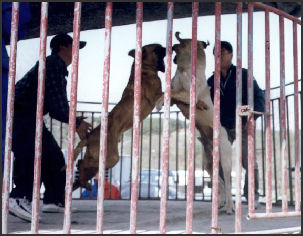 Tosa dog fights
in Shikoku Cockfights in Japan take place in a knee-high circular enclosures, about two meters in diameter. The combatants are not equipped with artificial spurs. Instead their natural spurs are sharpened. The first fighting cocks were imported from Thailand in the Edo period. The sport is permitted and the cocks are considered a protected species. In some places where cockfights are held an entrance fee is charged. Gambling is generally not allowed, at least openly anyway.

In Yasudacho in Kochi Prefecture cockfights are held almost every Sunday from December through June. There are three categories: 1 year olds, 1½ year olds and 2 years old. Points are scored, When a cock kills its opponent by stabbing him with his spurs he wins the maximum 10 points. When a cock makes his opponent flee he gets eight points. Losers are often eaten by the owner and his friends.

Fights between “shamos” (a bird in the pheasant family) are also popular. A single bird can sell for $10,000. When birds' careers are over they too are often thrown in a pot and eaten. One old Japanese man told the Asahi Shimbun, “It is the most delicious meat I’ve ever tasted on all my life.”

In the shogun era, daimyo hosted dog fights before battles to raise the moral of their samurai and offer examples of courage and fighting skill. Betting has never really been part of the sport. Dog fights using Tosa are still held today. Only male dogs fight. Females have traditionally served as watch dogs. Fighting dogs weigh 70 to 95 kilograms and sell for around $30,000. The enter the ring wearing a kesho mawashi, a belt and decorative apron similar to ones worn by sumo wrestlers.

Tosa fight in a ring. Most fights last a few minutes. The dogs usually clamp onto each other with their mouths. The fight ends when the loser whelps or whimpers. A referee waves flag in front of the dogs noses to separate them at the end of the fight. For training Tosa are walked six miles a day and taught to remain quiet when they fight.

Many illegally sold wild animals end up in the Japan as well as the United States and Germany. Single back lizards and other protected reptiles are sometimes mailed from Australia to Japan where they sell on the black market for up to $5,000. Rare radiated tortoises and ring-tailed lemurs from Madagascar have been stolen from research centers and children’s zoos in Japan and offered for sale on the illegal animal market through pet shops.

Four baby orangutans were once seized from the apartment of a former pet shop employee in Osaka. Five people, including the pet shop owner and the people who smuggled the animals into Japan, were arrested on charges of smuggling rare animals. The animals were purchased on the black market, sedated and brought into Japan in their carry-on luggage. The animals passed through customs at Kansai Airport without being discovered.

There is strong demand for rare reptiles in Japan. In December 2002, a gavial was seized by customs officials at Kansai International Airport. In August 2005, a pet shop owner and the head of a tropical garden were arrested for trying to sell rare false gavial crocodile hatchlings. In May 2004, three Japanese men were arrested in South Africa with 37 endangered armadillo-girdle lizards, which sell for around $3,500 each in Japan. There are believed to be only around 2,000 to 3,000 of them left in wild due to over hunting for the pet trade.

Tortoises and turtles are particularly sought after because their association with long life. Rare star tortoises from India and Pakistan can fetch between $20,000 and $25,000 in Japan.

There are illegal auctions for wild birds’such as white eyes, Japanese bush warblers and blue and white flycatchers — caught in Japan. Most of the birds are caught in forests using mist nets that are hung between trees by poachers. The birds are frequently bought by bird fanciers who value them for their songs. In some cases poachers are paid ¥1,500 for a bird that is bought at an action for ¥3,000 and ultimately sold to a bird fancier for ¥10,000.

In May 2007, 40 slow lorises — lemur-like creatures from South Asia that are a protected species under the CITES international treaty — were seized by customs officials at Narita Airport. The animals were found in small boxes brought in by a 38-year-old man on a flight from Bangkok. The animals were alive when seized but about a dozen died later.

There is lax enforcement against smuggling animals and the penalties are light if you get caught. There is a thriving underground market and a number of websites that offer rare animals. In some cases you can get animals in shopping mall pet stores. Authorities don’t put a lot of emphasis on catching animal smugglers. They insist they have more important things to worry about.

Snakes and Spiders in Japan

In September 2008, pet shop owner Naoki Bando was arrested for having 51 poisonous snakes in his apartment. The snakes were discovered when Bando called an ambulance after he was bitten by one of the snakes, a deadly green mamba from Africa, while feeding it. While in the hospital in critical condition he was attested for violating animal protection laws.

Bando ran a Tokyo shop that specializes in poisonous snakes, spiders and scorpions. He is believed to have sold over of $1 million worth of animals. Many of the poisonous snakes, which included cobras, were obtained from Kenya, Egypt and the United States through official customs-authorized channels.

In 2005 there were a number of public encounters with snakes that presumably were released by pet owners. In September a four-meter-long albino Burmese python, as thick as a man’s thigh, was found on a riverbank in Saitama Prefecture. The snake put up a fierce battle and took five police officers 30 minute to force into a garbage bag. Two days later a 50-centimeter long ball python disappeared in a park in Shinjuku Ward in Tokyo while it owner was “taking it for a walk.” A few days later a ball python was found in plastic container on the platform of JR Urawa Statio. It turned out to be different than the one that disappeared. Large scorpions have also been found.

The owner of snake told the Daily Yomiuri, “Snakes are easy to keep in apartments because they’re far quieter than cats or dogs, He said he fed his snakes frozen mice and likes to watch television with his snakes curled around his arm. He said his snakes feel great affection toward him especially when he helps them shed their skins.