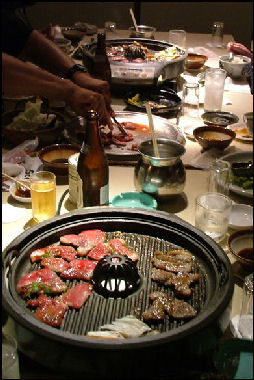 The Japanese annually eat about 13 pounds of beef, 22 pounds of chicken, 70 pounds of fish and one ounce of whale. They consume 130 grams of meat a day, compared to more than 200 grams consumed daily by Americans. Animal protein consumption increased 37 percent between 1961 and 1971, a period when Japan changed from a poor country to a rising industrial power.

Many Japanese enjoy eating raw beef as much as they do raw fish. Some sushi restaurants serve it. Raw horsemeat is popular in some parts of Japan.

The Japanese love eggs. They are used in sukiyaki and some kinds of sushi and gyudion beef bowls. In some places a typical lunch is a raw egg on a bowl of rice. The average per capita egg consumption is one a day. Supplying eggs are 140 million chicken, more than the population of Japan. Eggs “ along with rice “ are one of the few products that Japan produces enough of it to supply the entire country’s needs. Some of the best eggs are produced by Boris Browns given feed with seaweed and no chemical additives.

History of Meat Consumption in Japan

In the old days, Japanese rarely ate meat. They have traditionally eaten a lot of vegetables and, where it was available, fish. Land was regarded as necessary for growing rice, vegetables and fruit. Using it for cattle or other animals was considered wasteful.

Buddhism also discouraged the eating of meat. In A.D. 675, Emperor Temmu prohibited people from eating the meat of horses, monkeys, dogs, chickens and cows. The Temple of the Butchered Cow in Shimoda was erected shortly after Japan opened it doors to West. It honors the first cow slaughtered in Japan and the first violation of the Buddhist tenant against eating meat.

For a long time meat was sold only in back alley restaurants and shops by people described by one source as “disagreeable ruffians...who liked to brag that they had eaten meat.” Meat only became widely embraced in 1872 when “it was publically announced that Emperor Meiji partook of beef and mutton on a regular basis.”

In the old days when meat and other foods were scarce farmers netted birds such as the dusky thrush as they migrated northwards during the spring and ate them.


People in Kyushu enjoy eating horse meat and some even eat raw horse meat. Regarded as a delicacy, it is chewy and has a surprisingly sweet flavor. Cuts from the hindquarters are regarded as the best. Most of the horsemeat is imported from United States, South Korea, Chile and Australia. Horse is also widely eaten by people on France and Belgium.

Horse meat is usually eaten raw (“basashi”), in hot pot (“sakura-nabe”) and grilled (“bayaki”). Kyushu-style raw horsemeat is served with ginger and green onions. Sometimes restaurants offer a horsemeat menu in which all the above are served along with a soup with broiled horse innards. An Italian restaurant in Tokyo serves horse lips and Achilles tendons cooked in a wine-bases sauce with celery, string beans and other vegetables.

Horsemeat accounts for three percent of the meat sold in Japan. It is promoted in some places as a low calorie, low fat alternative to beef and pork. Those that eat it raw saw it has a delicate, sweet taste and is juicer than other meats, .

Kumamoto is the main horse-meat-producing area, It produced 3,100 tons of horsemeat, 40 percent of Japan’s total production.

Goat meat is very popular in Okinawa. It is cut raw from a flab of meat and consumed with beer as sashimi and is also stir fried and made into yagi-jiru goat soup. It has traditionally been eaten at celebratory events such as a housewarming or births of new baby. It has also been eaten as a remedy for overcoming fatigue from a hard day of cutting sugar cane. Consumption is declining as young people regard it as a food of the older generation.

Goat meat and goat milk were widely consumed after World War II when meat was in short supply. Describing goat meat served at an Okinawan restaurant Tom Baker wrote in the Daily Yomiuri, “the meat was pale and lean-looking, but as soft and chewy as one might expect much fattier flesh to be. There was no particular odor.”

Unusual Meats and Insects in Japan

In Osaka and Kyoto, there are restaurants that offer grilled sparrow. In Yamagata people eat pan-friend locusts. Residents of mountain villages in Oita like to eat wild deer sashimi. Pit vipers are eaten in some places as an aid to male virility. People also eat pond snails and crickets.

In the old days “mountain whale” was a euphemism for wild game. Wild boar meat is regarded as a delicacy in Japan. Takeo, a small city in the mountains of western Saga Prefecture decided to turn its wild boar pest problem into a money maker. In 2008, wild boars there cases $140,0000 in damage to rice and bean farms and hunters killed 1.541 boars. The boars used to be buried but now are processed and sold to restaurants and supermarkets, with some of profits going to hunters who shot them.

In August 2003, a man died from eating raw wild boar that carried hepatitis E. Another man caught the disease from eating the same meat. Earlier two men contacted it from raw deer meat. They were the first known case of people contacting hepatitis E from wild animals.

Some Japanese like to eat suppon soft-shell turtle dishes. Low in fat and rich iron and calcium, they typically thrown shell and all into a nabe-style stew. Every part except for the shell, claws, bladder and gallbladder are eaten. Asian have traditionally believed that eating turtle brings long life and gives people who eat it energy in the summer,

Cheese, Milk and Yogurt in Japan


egg vending machine In the old days Japanese rarely consumed dairy products. About 95 percent of all Japanese are lactase deficient. This means they have problems digesting milk products. In traditional Japanese cooking you find no cheese, milk, cream sauces, or butter. In the old days, Japanese rarely ate cheese, which until fairly recently was consider foul-smelling, vile stuff. These days after decades of exposure to Western foods, cheese is very popular. In supermarkets you can a reasonable selection of European cheeses such as Camembert and Danish blue cheese. A cheese made in Hokkaido have won a gold medal for flavor in the soft cheese category at the Mountain Cheese Olympics in Switzerland.

Yoghurt is popular, especially with young men worried about their weight and health. In Japan you can get some unusual foods made with yoghurt such as smoothies made and with black sesame and banana or with sweet black beans and aloe.

In the spring of 2008, there was a severe butter shortage in Japan. Stores across the nation ran out of it, supermarkets with empty shelves tried to ration the few sticks they had, bakers had to scramble to secure supplies and the government imported 5,000 tons of it to make sure there was enough.

One baker who was told that his shipment of butter would come a month than scheduled told the Los Angeles Times, “We’re in trouble. We’ve had to come up with some new items that use less butter like cookies. ...But you’re talking about flavor. How can you replace butter?”

How did this happen? Only two years before that. Japan had a surplus of milk that was so severe 1000 tons of it was poured down sewers, breweries were producing a low-malt beer made with one third milk and farmers gave it cartons of milk for free outside railway station.

The butter shortage was brought about by several factors: 1) declines in milk production in Japan linked to hundreds of dairy farmers going out of business because the high cost of livestock feed and deceased consumption of milk brought about by media reports that milk was bad for you, 2) a decrease in imports brought bu three-year drought in Australia and 3) the use of milk to make milk and cheese, leaving little left over for butter.