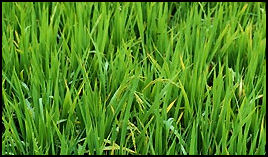 Rice yields in China increased dramatically with the introduction of high-yield dwarf rices. These scientifically-bred strains---crosses between Mexican- and Philippine-bred wheat and cold weather rice from China---have been so successful that farmers have been able to raise more rice on less land. The surplus land has been used to raise more profitable crops like cotton, fruit and vegetables. Some land has been used to raise fodder for cattle and cows to meet the new demand for dairy products and meat.

Rice fields have shrunk by 19 million hectares in the past decade as farmers have switched to other crops and abandoned marginal land.

Rice as a Crop


Rice terraces in Yunnan Rice is a member of a family of plants that also includes marijuana, grass and bamboo. There are over 120,000 different varieties of rice including black and red strains as well as white ones. Rice plants can grow to a height of ten feet and shoot up as much as eight inches in a single day. [Sources: John Reader, Man on Earth (Perennial Libraries, Harper and Row]; Peter White, National Geographic, May 1994]

Rice is the world’s No.1 the world's most important food crop and dietary staple, ahead of wheat, corn and bananas. It is the chief source of food for about 3 billion people, half of the world’s population, and accounts for 20 percent of all the calories that mankind consumes. In Asia, more than 2 billion people rely on rice for 60 to 70 percent of their calories. If consumption trends continue 4.6 billion people will consume rice in 2025 and production must increase 20 percent to keep up with demand.

Rice grows almost anywhere: the flooded plains of Bangladesh, the terraced countryside of northern Japan, the Himalayan foothills of Nepal and even the deserts of Egypt and Australia. Rice straw was traditionally used make sandals, hats, ropes and patches for thatch roofs.


Jiahu culture Rice is believed to have been first cultivated in China or possibly somewhere else in eastern Asia around 10,000 years ago. The earliest concrete evidence of rice farming comes from a 7000-year-old archeological site near the lower Yangtze River village of Hemudu in Zheijiang province in China. When the rice grains unearthed there were found they were white but exposure to air turned them black in a matter minutes. These grains can now be seen at a museum in Hemudu.

Evidence of rice dated to 7000 B.C. has been found near the village of Jiahu in Henan Province northern China near the Yellow River. It is not clear whether the rice was cultivated or simply collected. Rice gains dated to 6000 B.C. have been discovered Changsa in the Hunan Province. In the early 2000s, a team form South Korea’s Chungbuk National University announced that it had found the remains of rice grains in the Paleolithic site of Sorori dated to around 12,000 B.C.

Wild rice grows in forest clearings but was adapted to grow in shallow flooded fields. The introduction of paddy agriculture dramatically changed the landscape and ecology of entire regions.

DNA analysis shows that these early forms of rice were different from varieties eaten today. Africans cultivated another species of rice around 1500 B.C. The Moors introduced rice to Europe via Spain.

Irrigation, agriculture (primarily rice farming), weaving and iron and bronze casting techniques were introduced to Japan from Korea and China between 300 and 100 B.C.


Growing the seedlings Wet rice is grown in paddies in lowlands and terraces on the slopes of hills and mountains. Most rice paddies and terraces are irrigated with water that originates above where the rice is grown. In most cases water from one paddy drains into another paddy. Rice has to be harvested when the soil is dry and consequently the water must be emptied from the paddy before the harvest and filled up again when the new crop is ready to plant.

A typical paddy system consists of a holding pond and a network of canals, ditches and wooden or bamboo conduits to transport water to and from the paddies. The holding pond is usually at the head of a valley and collects water that seeps naturally form the surrounding hillsides. From the holding pond the water is carried down slopes in narrow ditches to run alongside the paddies. These ditches are always kept at a level slightly higher than the paddies.

Dikes are built around the fields to keep water in the paddy. Simple sluice gates, often comprised of a thick board and a few sandbags are set up at intervals along the ditchs. The amount of water entering a paddy can be regulated by opening and closing these gates. A drainage canal usually runs down the center of the valley. New innovations include concrete-sided canals, water pumped from underground sources and abandonment of holding ponds.

Maintaining a rice paddy is also very labor intensive. Shoring up the dikes and cleaning out the irrigation systems has traditionally been men’s work while planting and weeding has traditionally a job for women. Some knowledge of hydrodynamics is necessary to make sure the water is directed where it needs to go.


Bundling the seedlings Fields are prepared before the rainy season with some plowing, often using water buffalo, and flooding. About a week or before planting so the paddy is partially drained, leaving behind a thick, muddy soup. Rice seedlings are grown in nursery plots, transplanted by hand or with a machine. Seedling are planted instead of seeds because the young plants are less vulnerable to disease and weeds than the seeds. Farmers that can afford pesticides and fertilizers sometimes plant seeds.

Rice planting in much of the world is still done by hand, using methods that for the most part have remained unchanged for the last three of four thousand years. The foot-long seedlings are planted a couple at a time by bent-over planters who use their thumb and middle fingers to push the seedlings in the mud.

Good planters average about one insertion a second in a process that the travel writer Paul Theroux once said was more like needlepoint than farming. The sticky, black mud in the paddy is usually ankle deep, but sometime knee deep, and rice planter generally go barefoot instead of wearing boots because the mud sucks the boots off.

The seedling come on perforated plastic trays, which are placed directly on the transplanter. which uses a hook-like device to pluck the seedlings from the trays and plant them in the ground. The trays cost anywhere from $1 to $10. About ten pallets contain enough seedlings for a small paddy.

The water depth in the paddy is increased as the rice seedlings grow and then gradually lowered in increments until the field is dry when the rice is ready to be harvested. Sometimes the water is drained during the growing season so the field can be weeded and the soil aerated and then water is put back in.

Rice is harvested when it is a golden-yellow color several weeks after water has been completely drained from the paddy and the soil around the rice is dry. In many places rice is still harvested with a sickle and bundled into sheaves and then threshed by cutting the top inch or so of the stalks with a knife and removing the grains by slapping the stalks over propped up boards. The rice is placed on large sheets and left to dry on the ground for a couple of days before being taken to the mill to be processed. In many villages around the world, farmers usually help each other to harvest their crops.

There are also harvesting machines. Some diesel-powered rototiller-tractors and mechanical rice transplanters are available with harvesting attachments. Large machines are not used to harvest rice because they can not maneuver around the paddy without messing them up. Plus, most rice paddies are small and divided by dikes. Large machines need long tracts of uniform land to do their job efficiently.

After the rice harvest the stubble is often burned aling with waste products from the harvest and the ashes are plowed back into the field to fertilize it.


After rice is harvested it is usually taken to a local rice processing plant where huge two-story machines with conveyor belts and vibrators removes the husks and other impurities, polish the rice and deposit in a bag ready to eat. The best machines come from Japan. The husks and other left over materials are fed to pigs or other animals.

Describing the "modern way" of husking rice used in some parts of Asia, Patrick Tyler wrote in the New York Times, "First a tractor was driven, in reverse, in fast and furious circles over the dried rice stalks. The process resembled a dangerous rodeo stunt as the tractor bounded over 5- and 6-foot piles of rice stalks, narrowly missing farm hands, women and children who pushed and pulled at the straw to insure that all of it got run over several times." [Source: Patrick Tyler, New York Times, November 2, 1995]

"The crazy dance of the tractor caused most of the rice grains still inside the husks to separate from the stalks," Tyler wrote. "The peasants then bundled and beat the stalks against the side of a wooden box, collecting as many grains as they could. The stalks were then built into stacks, which would be burned to fertilize the fields...The rice grains were left on the concrete slab mixed with the debris of the stalks. After a few more hours of raking and hurling the debris into the air, the rice was finally separated from the chaff and the harvest was bagged for storage."

Rice plants have been greatly improved over the last three decades. Plant breeders have created plants that mature in 110 days instead 160 which means that regions with warm climates can grow three crops instead of two. The height of the average plant has been reduced from five feet to a stocky three feet, which means that the plant nutrient go into producing grains of rice and are not "wasted" on the stalks that lean over when there is too much weight. In addition, rice plants have been bred and bio-engineered to be resistant to bacterial blight, plant hoppers and stem borders.


Planting seedlings with a machine Plants from southern China, particularly in the mountainous areas of Yunnan are being studied for the potential of being used in bioegineered crops. Among these are varieties of rice that thrive in unusually cool temperatures, high altitudes or dry soil and rice that is rich in calcium, vitamins and iron. These varieties are being cross bred with popular food varieties to produce edible vitamin- and mineral-rich crops that grow in harsh conditions. Scientist have also figured out how to extract a cold-tolerant gene from mountain varieties and place then other varieties to improve their cold tolerance.

The introduction of new more productive strains of rice (and corn and wheat) to developing countries like India and Indonesia in the 1960s was called the "Green Revolution." Before the Green revolution India had problems feeding itself, now it exports rice. Between 1967 and 1992 the world's rice harvest has doubled. In in Indonesia it tripled from 15 million tons to 48 million tons.

By the year 2020 it is believed the world's rice crop will increase by an additional 60 percent. Current dwarf varieties have 15 productive panicles, or seed clusters per stalk (out 25 or so total stalks) that produce about 100 grains (seeds) each. New strains will have fewer, but stronger and thicker, stalks that will yield 200 or more grains each. These new plants are expected to account for most of the increased productivity.