Women's magazines In 2003, 9,074 magazines were published in China. As is true with newspapers, magazines have traditionally been traded among multiple readers, and often are posted on community bulletin boards for passers-by to read.

Many of the dozens of new home publications in China have English names such as such as Residence, Home Idea Magazine and Home-My Living, but the headlines and articles are all in Mandarin or Cantonese. Chinese editors often look to the U.S. for ideas about how to decorate all the new homes in China. Though the U.S. may have a $25 billion trade deficit with China, one American export clearly is surging: modern California style."About six months ago the flood gates opened," West Hollywood interior designer Jamie Bush said. "We were on some international blogs, and then all of a sudden, the calls started coming in. Five separate Chinese publications have contacted me in just a few months, and many of them have featured my projects." [Source: Alexandria Abramian-Mott, Los Angeles Times, July 30, 2011]

1) “Reader” (Duzhe) has long been regarded as the most popular magazine in China — so much so it has been called the "Chinese mind reader." Founded in 1981 and sponsored by the Gansu People's Publishing House, it is a general interest magazine that covers various subjects such as stories, celebrity’s biography, jokes, anecdotes, quotations.. Its monthly circulation was around million in April,2006, making it China’s biggest and the world’s fourth largest magazine at that time. It marketed in more than 90 countries and regions in the world. Duzhe is published semi-monthly and has been called both the New Yorker and the Reader’s Digest of China It publishes reader-submitted stories and essays, It is said, if there is Chinese, there is "Reader". [Source: Joanna Lao, Quora.com]

Vista is a favorite printed magazine launched in 2005. The magazine covers economics, events, life, city and many other topics. One read said: “It always present some fresh concepts to readers and guides to pay close attention to what is happening and will happen in modern China”. [Source: Judy Wong, Quora.com, 2016]

Rayli was founded in 1995 in Beijing. It is a Chinese female’s fashion magazine published by Beijing Rayli Magazine Office. The magazine covers costumes, beauty and skin care, household decorations, luxury goods, constellation and other fields. It is the No. 1 female fashion magazine in China.

Chinese National Geography is a monthly magazine similar to National Geographic magazine. Launched, in 1949, it is China’s most authoritative geographic publication. The magazine offers in-depth articles covering geography, history and culture, aiming at unraveling the mysteries of China. The magazine is circulated in both English and traditional Chinese editions.

Caijing is a biweekly magazine founded in 1998. It is a leading journal for business and financial issues in China. It mainly covers China’s economic reforms, policy changes and major events in the Chinese capital markets.

There many other widely-read magazines in China, such as New Weekly (Banyuetan). Most of these magazines have a print and e-magazine versions, and can be easily find on the Internet. Cosmopolitan is one of the top international brand magazine in China. The Chinese version was founded in 1993. It is published as a joint venture with Crystal, the first local Chinese fashion magazine

Readers is a hugely-popular magazine devoted to fiction, anecdotes, and other short-form literature. Sort of like Readers Digest, it has a low cover price and mainstream content, which give it mass-market appeal. By some measures it is ranked No. 5 in the world in terms of monthly circulation. Many of its readers are also aspiring writers, and their work fills the editors' mailbox each month. [Source: Danwei.org, August 9, 2008] 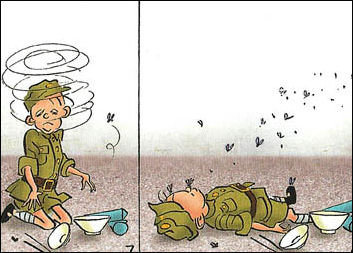 Sanmao comic Zhu Hong the editors of Readers provided the following list of shopworn subjects that gone way beyond over saturation: 1)“The Anti-Japanese War and the Cultural Revolution: Stories with these events as background have been written countless times over the last few decades, so it's difficult to break new ground in plot and theme. In addition, these subjects are fairly distant from the real lives of readers today, so it's hard to catch their interest or elicit their sympathy any longer.”

2)“Old, familiar subjects: the lottery, online chatting, SMS scams, gifts and bribes, collecting, kidnapping, car accidents, leukemia, kidney transplants, twins, extramarital affairs, pickpockets, teacher's assistants, crime investigation, mining, treasure hunting, hauntings...stories about these subjects, or whose plots that hinge on these subjects, make up the vast majority of submissions. If there's a sudden death, if it's not a car accident then it's leukemia; crime investigations always start with the scene of the crime; a woman dies and returns to life, and if she's not a ghost then she's a twin....so for old subjects like these that have been written thousands of times, unless you can dream up a ground-breaking plot that stands out from tradition, it's best to use them as little as possible.”

3) “Rural subjects: There are many unsophisticated rural authors in the ranks of our story writers, which means that rural subjects make up a large portion of submissions. However, our readers don't really enjoy reading stories depicting the poor, backward countryside and old customs and ideas. If a story begins: In such-and-such village, such-and-such town, so-and-so's family was very poor. His father had died, his mother was paralyzed, and his child had no money to go to school....how many readers are willing to continue reading material that starts off like this? Of course, if you can write a new story, one that reflects new ideas and the new face of new rural life, we might like it.” Sensitive political subjects and material that has a negative societal influence: These subjects will cause unwanted problems, so avoid them as much as possible.”

On choosing stories for each issue, Zhu wrote: “As editor, I consider how the subjects in each issue work together, and on a foundation of relative overall stylistic harmony, I try to make the content as varied and interesting as possible so that most readers will find the story of story they like in every issue... For example, “Wagon Love” is without a doubt a romance, with an unexpected ending sure to make readers sigh with emotion; “Stealing the Sun” is a fairly distinctive wuxia story whose character design and fight scenes are high points; “The Spiral Shave” is a folktale in the chuanqi mode that contains an exquisite description of the art of shaving heads and a shocking, unforgettable ending; “Mermaid in the Deep” an imaginative, bold fairy tale of the sort I'm sure middle school students will like; “Guest in the Bathhouse” is an inspirational story, short, poignant, and encouraging; “Outside the Window” is a legal story, and although the law is emotionless, people have emotions; “Angelo's Rich Woman is a richly-comic story from overseas, whose use of “sleeping under the bed” makes a significant impression....

Hu Shuli, the five-foot-two editor of the biweekly magazine Caijing, is regarded as one of China’s most hardhitting journalist. David Ignatius of the Washington Post called her China’s “avenging angel.” She is skilled at getting out the real story on unpleasant subjects like the Sichuan earthquake, the SARS cover up and corporate fraud, and asking the tough questions but writing her stories in such a way that names are not named, emotions aren’t stirred unnecessarily so that authorities don’t shut her down and the articles get read. Some say her most useful skills are her tireless ability to navigate the system and find the people who really known what is going and playing powerful groups off one another.

Since Hu Shuli founded Caijing in 1998 the magazine has tackled issues including pollution, political corruption and cover-ups, including: 1) revealing in 2001 that one of China's largest listed companies had falsified its profits — a deeply sensitive story, casting a shadow on senior politicians and resulting in an order to suspend the trading of the company’s stocks and jailing of its executives. 2) covering the SARS outbreak in 2003 and its cover-up; 3) producing a detailed 12-page investigation into shoddy school buildings and the Sichuan earthquake.

Caijing has a readerships of only about 200,000 but it is read by many movers and shakers in Chinese government, business and academia. And because of this it is filled with advertising for companies like Cartier and Mercedes. The magazine made its reputation with its tough reportage of SARS in China and recorded a number of important scoops after that. But it knows the limits. Once when it went too far — when it ran a story about $10 billion conglomerate called Luneneg being purchased for only $550 million by unknown buyers with the assumption being that those unknown buyers were somehow connected to important party officials or other untouchables — employees at Caijing had to tear up copies of the banned issue of the magazine by hand.

On why Caijing doesn’t name names, Hu told The New Yorker, “We try not to give any excuse to cadres who don’t want to get criticized.” In reference to the Sichuan earthquake she said, ultimately, the important question is not “which person didn’t use good quality bricks 15 years ago — but something deeper. “We need further reforms. We need checks and balances, We need transparency.”

On Caijing’s reputation for taking a non-emotional, analytic perspective she said, “We never say a word in a very emotional or causal way. Like “You lied.” We try to analyze the system and say “why” a good idea...cannot become reality.” Her approach appeals to reformers who want problems in government to be rooted out and addressed without compromising the Chinese Party’s power.

In the 2000s, some employees at Chinese hotels made a living fishing copies of foreign magazines and newspapers from the garbage and selling them to vendors who in turn sold them on the black market. A survey done by the Beijing Committee of material left behind at the Xinqiao Hotel determined that half of the magazines and newspapers left behind were alright but the other half contained "half-naked advertisements" and "partly erroneous" or "problematic" material.

Chinese-language versions of Cosmopolitan, Esquire and National Geographic have been sold in China. Playboy is banned. Cosmopolitan had a circulation of 385,000 in 2002. The Chinese version of the magazine is thick and filled with glossy picturers of Western and Asian women. There are stories about dedication and working hard, lots of Western features and advise on how to look good, but little mention of sex.

A Chinese version of Sports Illustrated hit the newsstands in China in August 2006. A Chinese-language version of Rolling Stone magazine was launched in China in March 2006. A single issue was released before regulators shut it down and dissolved its publishing agreement with its local partner. The inaugural issue featured Chinese rock pioneer Cui Jian on the cover along with articles about U2, Taiwanese star Jay Chou and blogging. The first run of the magazine’s120,000 copies sold out quickly.