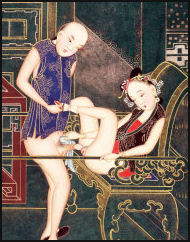 Golden Lotus was an unhappy housewife before she became Hs-men's lover. "Her hair was black as a raven's plumage; her eyebrows mobile as the kingfisher and as curved as the new moon. Her almond eyes were clear and cool, and her cherry lips most inviting...Her face had the delicate roundness of a silver flower, and her fingers as slender as the tender shoots of a young onion. Her waist was as narrow as a willow, and her white belly yielding and plump. Her feet were small and tapering; her breasts soft and luscious. One other thing there was, black-fringed, grasping, dainty and fresh, but the name I may not tell...it had all the fragrance and tenderness of fresh-made pastry, the softness and appearance of a new-made pie."

Jennifer Schuessler wrote in the New York Times, Sex “has fed fascination with the book, even though few people could actually read it. In Mao’s China, access to the unexpurgated edition was restricted to government high officials (who were urged to study its depiction of imperial corruption) and select academics. Today, complete versions remain hard to find in China, though it is easily downloadable on Chinese Internet sites. The level of raunch remains startling even to some Western literary scholars — particularly the infamous Chapter 27, in which the merchant, named Ximen Qing, puts his most depraved concubine to particularly prolonged and imaginative use. [Source: Jennifer Schuessler, New York Times, November 18, 2013 >]

“When I taught it, my students were flabbergasted, even though they knew about the novel’s reputation,” said Patricia Sieber, a professor of Chinese literature at Ohio State University. “S-and-M, the use of unusual objects as sex toys, excessive use of aphrodisiacs, sex under all kinds of nefarious circumstances — you name it, it’s all there.” “The novel’s sex has also inspired some modern reconsiderations. Amy Tan’s new novel, “The Valley of Amazement,” features a scene in which an aging courtesan in early-20th-century Shanghai is asked to re-enact a particularly degrading sex scene from this classic. “I can’t say any of the characters are likable,” Ms. Tan said of the older novel. “But it’s a literary masterpiece.” 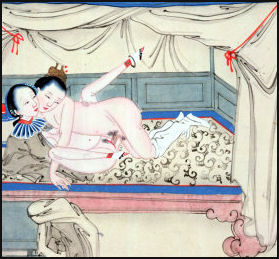 One night after Hs-men returned home drunk, Golden Lotus "played delicately with his weapon, but it was as limp as cotton wool and had not the slightest spirit. She tossed about on the bed, consumed with passionate desire, almost beside herself. She squeezed his prick, moved it up and down, put down her head and sucked. It was in vain. This made her wild beyond description."

Later she gave him three pills with a strong aphrodisiac that kept his penis erect while he was asleep. When she climbed on top of him "her body seemed to melt away with delight...she moved up and down about 200 times. At first it was difficult because it was dry but soon the love juices flowed and moistened her cunt. Hs-men let her do everything she wished, but he himself was perfectly inert. She could bear it no longer...She twisted herself towards his penis which was completely inside her cunt, only his two balls staying outside."

"She stroked his penis with her hand, and it was wonderfully good. The juices flowed and in a short time she had used up five napkins. Even then Hs-men kept on, although the tip of his penis was swollen and hotter than a live coal. It was so tight that he asked the woman to take off the ribbon, but his penis remained stiff and he told her to suck. She bent over and with her red lips moved the head on his prick to and fro, and sucked."

"Suddenly white semen poured out, like living silver, which she took in her mouth and could not swallow fast enough. At first it was just semen, soon it became blood which flowed without stopping. Hs-men had fainted and his limbs were stiff and outstretched...Golden Lotus was frightened. She hastily gave him some red dates. Blood followed semen, and the blood was followed by freezing air. Golden Lotus was terrified. She threw her arms around him and cried, 'darling, how do you feel?'...Readers, there is a limit to our energy, but none to our desires. A man who sets no bounds to his passion cannot live more than a short time..."

Jennifer Schuessler wrote in the New York Times, “When David Tod Roy entered a used-book shop in the Chinese city of Nanjing in 1950, he was a 16-year-old American missionary kid looking for a dirty book. His quarry was an unexpurgated copy of “The Plum in the Golden Vase,” an infamously pornographic tale of the rise and fall of a corrupt merchant, written by an anonymous author in the late 16th century. Mr. Roy had previously encountered only an incomplete English translation, which switched decorously into Latin when things got too raunchy. But there it was — an old Chinese edition of the whole thing — amid other morally and politically suspect items discarded by nervous owners after Mao Zedong’s takeover the previous year. “As a teenage boy, I was excited by the prospect of reading something pornographic,” Mr. Roy, now 80 and an emeritus professor of Chinese literature at the University of Chicago, recalled. “But I found it fascinating in other ways as well.” [Source: Jennifer Schuessler, New York Times, November 18, 2013 ]

“So have readers who have followed Mr. Roy’s nearly 40-year effort to bring the complete text into English, which has just reached its conclusion with the publication by Princeton University Press of the fifth and final volume, “The Dissolution.” The novelist Stephen Marche, writing in The Los Angeles Review of Books, praised Mr. Roy’s masterly rendering of a richly encyclopedic novel of Ming dynasty manners, which Mr. Marche summed up, Hollywood-pitch style, as “Jane Austen meets hard-core pornography.” And Mr. Roy’s scholarly colleagues are no less awe-struck at his erudition, which seemingly leaves no literary allusion or cultural detail unannotated.

“He is someone who believes it’s his obligation to know absolutely everything about this book, even things that are only mentioned passingly,” said Wei Shang, a professor of Chinese literature at Columbia University. “It takes a certain kind of stubbornness to complete this kind of project.” The range and precision of Mr. Roy’s 4,400-plus endnotes would give one of Nabokov’s obsessive fictional scholars a run for his money. They touch on subjects ranging from the novel’s often obscure literary references and suggested further reading on “the use of impatiens blossoms and garlic juice to dye women’s fingernails” to obscure Ming-era slang whose meaning, Mr. Roy notes with pride, had long eluded even native Chinese-speaking scholars.

“It’s not just a translation, it’s also a reference book,” said Yihong Zhang, a visiting scholar at the University of Pittsburgh who is translating some of Mr. Roy’s notes into Chinese as part of his doctoral dissertation at Beijing Foreign Studies University. “It opens a window onto Chinese literature and culture.”

Jennifer Schuessler wrote in the New York Times, “Mr. Roy dates the beginning of his work on the translation to the 1970s. By then, a revision of Clement Egerton’s 1939 English translation had put the Latinized dirty bits into English. But that edition still omitted the many quotations from earlier Chinese poetry and prose, along with, Mr. Roy said, much of the authentic flavor. [Source: Jennifer Schuessler, New York Times, November 18, 2013 ]

“So he began copying every line borrowed from earlier Chinese literature onto notecards, which eventually numbered in the thousands, and reading every literary work known to have circulated in the late 16th century, to identify the allusions. The first volume appeared in 1993 to rave reviews; the next came a long eight years later. Some colleagues urged him to go faster and scale back the notes. At one point, a Chinese website even reported that he had died amid his labors.

Just as Mr. Roy was completing the final volume, he received a diagnosis of Lou Gehrig’s disease, which ruled out any prospect of preparing a condensed edition, as his Chicago colleague Anthony Yu did with his acclaimed translation of “Journey to the West,” another marathon-length Ming classic. “I miss having something to concentrate on,” Mr. Roy said. “But unfortunately, I’m suffering from virtually constant fatigue.”

Jennifer Schuessler wrote in the New York Times, “the “Chin P’ing Mei,” as the novel is known in Chinese, is about far more than just sex, scholars hasten to add. It was the first long Chinese narrative to focus not on mythical heroes or military adventures, but on ordinary people and everyday life, chronicled down to the minutest details of food, clothing, household customs, medicine, games and funeral rites, with exact prices given for just about everything, including the favor of bribe-hungry officials up and down the hierarchy. [Source: Jennifer Schuessler, New York Times, November 18, 2013 ]

“It’s an extraordinarily detailed description of a morally derelict and corrupt society,” Mr. Roy said. It may take a certain stubbornness on the part of ordinary readers to make it all the way through this five-volume work, given its Proustian length (nearly 3,000 pages), DeMille-worthy cast (more than 800 named characters) and “Ulysses”-like level of quotidian detail.

“Scholars credit Mr. Roy with rescuing “The Plum in the Golden Vase” from its reputation in the West as merely exotic pornography and opening the door to a more political reading of the book.It’s one that already comes easily to commentators in China, where the novel is seen as holding up a mirror to the tales of political and social corruption that fill newspapers now. “You can find people like Ximen Qing easily today,” said Mr. Zhang in Pittsburgh. “Not just in China, but everywhere.”