OSAKA VERSUS TOKYO AND REGIONAL DIFFERENCES IN JAPAN


Tokyo people Modern Japanese in the northern prefectures have rounder eyes, more body hair and wider faces, which suggests closer links to Jomon people who lived from 10,000 B.C. to 400 B.C.. The archeologist Yasuhiro Okada told the New York Times, "People from northern Japan can be 60 to 80 percent of Jomon origin, while those from western or southern Japan are 40 percent Jomon or less."

These conclusion are also supported by studies of ear wax. The are two main ear wax types found in Japan: wet and dry. Students at Nagasaki High School were able to isolate the gene that determines ear wax type and with that information in hand they collected era wax samples from all over Japan and put together an ear wax map and found that dry ear wax is more common on western Japan. Studies have found that people living in Japan in the Jomon period (10,000 B.C. to 300 B.C.) carried the gene for wet ear wax while the gene for dry earwax was introduced into Japan by people that came to from the Asian continent in the Yayoi period (300 B.C. to A.D. 300)

Regionalism remains strong in Japan. While the writer Patrick Smith was visiting the northern town of Akita, a taxi driver told him that he was not from this area, he was from Osaka. Smith asked when his family moved here. "About 200 years ago," he responded.

People from Tokyo and Kanto are regarded as busy, cold, impersonal, polite, formal and stressed out. They are less likely to have a desire to stand out and they favor brown, gray and earth-toned colors. Many of the stereotypes that are used to describe Japanese as a whole seem more apt for Tokyoites than Japanese outside of Tokyo. Tokyo is where the samurai class was based in the Edo period and the culture has a long history of obedience, duty and following rules.

Tokyoites and Osaka people are the two dominate groups in Japan. Sometimes they have different customs. In Tokyo people stand on the left of escalators and pass on the right. The opposite is true in Osaka.


Taro, the symbol of Osaka People from Osaka and Kansai are regarded as more outgoing, pragmatic, independent and irreverent than other Japanese particularly those from Tokyo. They are more likely to jaywalk, gamble, show their feelings, display rude or inconsiderate behavior, smoke in no smoking areas, and show disdain for bureaucracy and rules. Osaka-ban, the Osaka dialect, is regarded as rough and crude by many other Japanese.

Kansai people were known as the biggest cowards in World War II. They had a much higher rate of desertion and running away than Japanese from other regions.

Osakans have been called the “Latins of Japan.” They produce many of Japan’s funniest comedians and are known for enjoying good food, wearing bright clothes, and hating Tokyo and Tokyoites. Their appetite for life is summed up by the local word kuidaore (literally “to eat yourself to bankruptcy”). There is also a more unsavory side to this. Osaka is No. 1 in purse snatching, train molesting and illegally parked cars.

When you ask a Tokyoite for directions they point in the direction. When you ask a Kansai person for directions they take you there. It has been said that Osakan friendliness has it roots in the absence of samurai and the presence of a large number of merchants. One Osakan told the Japan Times, "Merchants consider everyone a potential customer. They don't want to run the risk of losing you as a customer so they go out of their way to be friendly." The merchant class of Osaka stays alive in other ways. A common Osakan greeting is "Are you making any money?"

Osakans are very stubborn about keeping their dialects even after living years in Tokyo. The Osakan dialect is almost like the Japanese equivalent of cockney English. It is full of colorful expressions and is the source of amusement in many comedy routines. The preferred insult in the Tokyo area is “baka.” It roughly translates to “idiot.” In Osaka the preferred word is “ahoya,” which roughly means “foolish,” as in making mistakes that all people make at one time or another.

Osakans are regarded as very impatient. They often say "Time is Money" and say Tokyo people waste a lot of time in meetings. According the one study Osakans walk faster than Tokyo people (1.60 meters per second as opposed to 1.56 meters a second). Osaka was one of the first places to have crosswalks that displayed the number of seconds until the light changes so people know how long they have to wait. When No Car Day was introduced to relieve traffic by asking people not to drive the traffic was actually worse. The thinking among Osakans was that there would be less traffic on those days and would be better for driving, hence everybody drove.

Osaka people have a reputation for bargaining everywhere even at the department stores. One 37-year-old housewife told the New York Times, “I usually haggle when I go shopping...I negotiate prices, even in large stores. We haggle while smiling and tricking each other, and we make them give us discounts. If you live in Osaka, you’ll do it. It’s something you’re born with here.”

Bargaining and haggling are not as common as it once was, especially since the recession closed many mom and pop stores, leaving behind Tokyo chains that don’t tolerate it. One Osaka shop owner told the New York Times, “In Tokyo, I understand people don’t want to haggle over prices because they think it’s not cool. They check prices from place to place before actually buying anything. Ths Tokyo style is spreading to Osaka.” 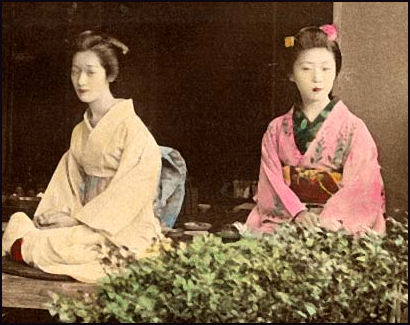 19th century Kyotoites
at a tea shop Kyoto people have a reputation for being arrogant, cool, mannered, refined and partying a lot. They consider themselves to be the Japanese elite. The Kyoto dialect is so formal it is almost like the Japanese equivalent of Shakespearean English.

Kyotoites have a reputation for being conservative, valuing tradition, admiring quality over profit and going out their way to avoid conflict and develop harmonious relations. Introductions, connections and secrets are necessary to get ahead in Kyoto’s social world. The relocation of the royal family to Tokyo in the 19th century is still regarded as a tragedy.

Kyoto is where old traditions remain most intact. The Geisha world still exists and people still follow arcane rules of etiquettes that were dropped centuries ago in the rest of Japan.

People from Kyushu are regarded somewhat as barbarians because they eat horse meat — including horse meat sushi and sashimi — and speak dialects that other Japanese have difficulty understanding. In the 1960s a group of Kyushu farmers tired of being portrayed as bumpkins and fed with government restrictions dug up their rice fields are rallied around the battle cry: "Plant plums and chestnuts, and to Hawaii we will go!"

The Okinawans are regarded as warm, friendly, fun-loving people. They are considered somewhat eccentric by other Japanese. When one Okinawan man was asked by National Geographic reporter Arthur Zich what the difference between Japanese and Okinawans were, the man said, "The heart. Ninjo”human feeling. Up there it's cold. In Okinawa it's warm! Like our sun!" Okinawans are among the longest-living people in the world.