MUSIC, ART AND ARCHEOLOGY IN CHINA 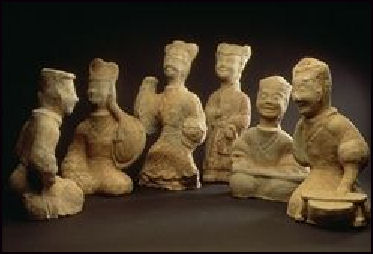 Han-era musicians and dancers J. Kenneth Moore of the Metropolitan Museum of Art wrote: “China provides some of the earliest traces of music making. These are mainly in the form of well-preserved musical instruments, the tangible evidence of music. Over several millennia, musical instruments from regional indigenous traditions as well as from India and Central and West Asia were assimilated into the mainstream of Chinese music. Some of the most ancient instruments have been retained, transformed, or revived throughout the ages and many are in common use even today, testifying to a living legacy of a durable art. This legacy is frequently celebrated in the visual arts of China, documenting rituals and celebrations, or as status symbols of those whose lives were enhanced by the resonate sounds of instruments made from hide, clay, metal, stone, gourd, wood, silk, and bamboo. [Source:J. Kenneth Moore Department of Musical Instruments, Metropolitan Museum of Art metmuseum.org \^/]

“ Eight thousand years ago, people in central China delighted to the airy timber of tonally precise flutes. Made from the wing bones of red-crowned cranes, these remarkable Neolithic end-blown flutes, the world's oldest playable instruments, are witnesses to a dynamic musical tradition that was astonishingly sophisticated both acoustically and musically. Unearthed in Jiahu, Henan Province, in 1986 and preserved in the Henan Provincial Museum, Zhengzhou, the flutes, known as gudi, possess five to eight perfectly spaced and fastidiously drilled fingerholes. These rare instruments clearly document the maker's hand in applying acoustic accuracy in the service of music. It is believed that the flutes played a role in ritual as music was often connected to cosmology and the stability of the state. \^/

“In the period between 3,500 and 2,000 years ago, Chinese rulers constructed elaborate tombs containing weapons, vessels, and remains of servants and, in some cases, full ensembles of musical instruments such as stone chimes (known today as qing), ovoid clay ocarinas (xun, 2005.14), and drums. In addition to these instruments, Shang-dynasty finds (ca. 1600–ca. 1066 B.C.) include beautifully decorated dual-toned bronze bells with and without clappers (ling and nao, 49.136.10), barrel-shaped drums (gu), and bronze drums. Hints as to the use of these instruments were inscribed on small pieces of bone (oracle bones) dating from the fourteenth to the twelfth century B.C. These pictographs make reference to ritual dance and music and those depicting instruments are easily equated with modern Chinese characters. \^/

“Zhou-dynasty musical ensembles (11th–3rd century B.C.) contained highly complex and varied instruments. Orchestras consisting of exceptionally decorated instruments, notably one discovered in 1978 in the tomb of the Marquis Yi of the former Zeng state (Hubei Province, 5th century B.C.), reveal an astonishing understanding of the interplay between physics, acoustics, metallurgy, and design. Some 125 instruments, including sets of tuned bells and stone slabs suspended from ornate tiered stands, transverse flutes, bamboo panpipes, mouth organs producing several pitches at once (sheng), zithers, and drums comprise an ensemble that was the most sophisticated and complex of its time.”\^/

The oldest playable flute, a seven-holed instrument carved 8000 years ago from the hollow wing bone of a large bird, was unearthed in Jiahu, an archeological site in the Yellow River Valley in central China. The flutes were found in the late 1980s but were not described in the West until 1999. [Source: Zhang Juzhong and Lee Yun Kuem, Natural History magazine, September 2005]

Thirty-three flutes---including around 20 intact flutes and several broken or fragmented ones and several more unfinished ones---have been found at Jiahu. All are between seven and 10 inches in length and are made of wing bones from the red-crowned crane, a bird that stands five feet tall and has a wing span of eight feet and is famous for its courtship dance. It seems plausible that ancient flutes were also made from bamboo. Ancient myths described bamboo flutes but no ancient ones have been found in all likelihood because bamboo decays more quickly than bone and doesn’t survive burial for thousands of years like bone does.

The flutes were cut, smoothed at the ends, polished and finally drilled with a row of holes on one side. One of the broken flutes was repaired by drilling fourteen tiny holes along the breakage lines and then tying the section together with string.

The flutes have between five and eight holes. They play in the so-called pentatonic scale, in which octaves are divided into five notes---the basis of many kinds of music, including Chinese folk music and rock n' roll. The fact that the flute has a scale indicates that its original players played music rather than just single notes.

The flutes were probably used in some kind of ceremonial capacity but may have been played for entertainment. The flutes were found along with evidence early wine making (See Below), which suggests that the people who played them could have been a festive bunch.

In June 2009, a 35,000-year-old bird bone flute found in a cave in Tuebingen, Germany was declared the world’s oldest flute.

Types of Flutes in China


Music made by ancient flutes

About two dozen flutes from the middle phase were unearthed. Fifteen are intact or could be reconstructed. One has two holes. The others all have seven holes and can play eight pitches. Despite some difference in the range of pitches the intervals between them are similar.

Seven flutes from the late phase were unearthed. One of them can still played. These have eight holes and pitch intervals close together and are capable of a variety of melodic structures. A flute from the late phase found 80 miles from Jiahu in Zhinghanzhai has tens holes, staggered on two parallel lines with the intervals between them close to half steps.

Notes from the playable flute have been recorded and analyzed. The flute produces a rough scale covering the modern octave, beginning close to the second A above middle C, and appears to have been tuned---a tiny hole was drilled near the seventh hole, with effect of raising that hole's tone from roughly G-sharp to A, completing the octave.

According to Chinese texts, music began round 2700 B.C., when Huang Di, China’s legendary first emperor, ordered bamboo pipes of the right length to be cut so he could imitate the song of the phoenix.

Confucian classic from the Zhou (Chou) dynasty (1030-221 B.C.)---Book of Rites (Li Chi) and Book of Songs (Shijing)---has sections on the philosophy of music and records folk songs, eulogies to the emperor, eulogies for princes and sacrificial rites.

To early Confucians music had political and moralistic functions and was regarded as a pursuit of virtuous men. In the 6th century B.C., Confucius said that music and dance were such important elements of political life they should not be squandered on entertainment. According to one story, Confucius found himself at a festival with singers and jesters and declared, "Commoners who beguile their lords deserve to die. Let them be punished!" The party was immediately stopped and the performers were killed.

Confucius put a great emphasis on music as an accompaniment for rites. According to the Confucian Book of Rites: “Music issues from within, the rites act from the outside. Serenity is the result of music issuing from within; refinement is the result of the rites acting from outside. Great music must be simple; great notes must be easy. When music is it at its best there is no resentment, when the rites are at their best we do not contend.”

In 120 B.C., during the Han dynasty, a bureau of music was established that presided over both festive music performed at festivals and banquets and solemn music performed at ceremonial occasions. Folk songs from this period were recorded and preserved in imperial archives. Although the music has been lost some of the words have survived and the way that phrases are repeated indicates the songs were performed by choral singers.

In 1977 an extraordinary 2,500-year-old tomb was found near the city of Suzou in Hubei Province. The four-chamber structure contained the remains of a marquis and the largest cache of ancient musical instruments ever found along with 21 sacrificed women (perhaps wives, concubines, or musicians), chariots, and weapons.

The musical instruments included zithers, bamboo flutes, pan pipes, bronze drums, stone chimes and a set of 64 cast-bronze bells in a lacquered wooden frame. The bells covered a range of five octaves, each with 12 semitones. The largest bell weighed 485 pounds. It is engraved with two elephants engaged in a greeting ritual. Such bells were used temple fairs, burials and other ritualistic events.

Sheila Melvin wrote in the International Herald Tribune, "The chime-bells hang from a three-level frame made of lacquered wood and copper. The frame is supported by stunning bronze posts shaped like warriors with muscled arms, loose robes and daggers sheathed at their waists. The bells, frames and hooks have 3,755 inscriptions that provide hanging and assembly instructions and reveal an elaborate theory of music...So sacred were the chime-bells that their seams were sealed with human blood and their inaugural performance was a state ceremony of the most importance."

During the Han dynasty, in the first century B.C., the Yuefu (imperial music bureau) was established. Its purpose was to collect regional popular music and poetry, oversee ceremonies at court, hire musicians, and standardize pitch. (A version of this office continued to operate until 1911.) Many ancient traditions lost during the Qin dynasty (221–206 B.C.), the dynasty preceding the Han, were recovered, and a Confucian musical ideology was disseminated.\^/

“In addition to the royal and ritual instruments found in tombs, many types of instruments serving popular and folk traditions existed and of these only vague written references or visual iconography survives. Significantly, instruments such as the harps, lutes, and drums depicted in the caves at Dunhuang and other oasis towns in Central Asia were making their way into China from the south and west as trade began along the routes that would become the Silk Road. \^/

“Beginning in the Han dynasty, musical instruments were among the items introduced and exchanged along the Silk Road. Among those brought from the west were lutes similar to today's Middle Eastern ud, oboe-type instruments, and metal trumpets; among those brought from India were long-necked lutes and drums. In China, the ud-like instrument, with its round back, was transformed into the flat-backed pipa. The same Middle Eastern instrument later migrated west and became the European lute, used from the Middle Ages through the Baroque period. Indeed, "lute" is a corruption of the Arabic al ud—an etymological clue to the instrument's origin.\^/

“Music in Tang-dynasty China underwent a radical change in the sixth and seventh centuries as a result of the mass migration of peoples from Central Asia, many of whom came to the interior of China as musicians and dancers at the imperial court or in popular venues. Patronage of music at court peaked during the reign of Emperor Xuanzong (r. 712–55), when thousands studied at the Imperial Music Academy and hundreds of the best musicians resided at the palace.” \^/