The higher elevations of Africa, the Andes mountains in South America, and the Alps in Europe are warming at a faster pace than lowlands. Forests are creeping up to higher elevations along with disease-carrying insects. Above-average melting was observed in Switzerland in 2019, where glaciers there lost 800 million tons of ice during the heat waves of June and July. Alaska also saw record sea-ice melt in July. The flamboyant Chinese multimillionaire Mou Qizhong suggested blasting a 30-mile hole in the Himalayas to let in warm air.

Global warming could cause earlier spring melts disrupting water management and releasing water before people in the lowlands are ready. While global warming can increase melting it can also increase evaporation and produce snow-generating clouds.

A study by scientist at the University of Arizona of tree species and desert plants in the mountains of southern California that the plants there had moved up an elevations of 60 meters over the last 30 years. Many plants flower a week earlier in Europe than they did 50 years and shed their leaves five days earlier. 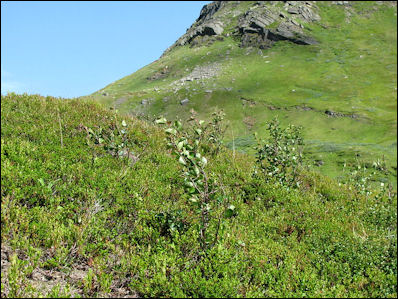 Warming Norway mountains, new plants growing at higher elevations Shrinking glaciers are a problem for millions of people who rely on seasonal glacial melt for daily water. More than 1 billion people live in river basins fed by glacier or snow melt. The shrinkage of glaciers could significantly affect water supplies. The loss of glaciers could also seriously diminish hydropower, This doesn’t bode well for Europe, which generates 20 percent of its electricity through hydropower, and for countries down river from the Himalayas which hope to tape power from rivers fed by Himalayan glaciers.

In many river systems seasonal snow melt is a more important determinant of water supply than glacier and people that live along these rivers and rely on hydropower provided by them are more worried about weather and precipitation changes associated with with global warming than are about retreating glaciers. Rapid melting can cause deadly outbursts from glacial lakes in places like India, Nepal and Tajikistan

The vast amount of water stored in Himalayan glaciers plays a crucial role in river flows, hydropower generation and agricultural run in the Ganges, Yangtze, Mekong and Indus river systems in Asia and elsewhere. J. Madeleine Nash wrote in Smithsonian magazine, “The loss of high-mountain ice in the Himalayas could have terrible consequences for people living downstream. Glaciers function as natural water towers. It's the ice melt in spring and fall that sends water coursing down streams and rivers before the summer monsoon arrives and after it leaves. At present, too much ice is melting too fast, raising the risk of catastrophic flooding; the long-term concern is that soon there will be too little ice during those times when the monsoon fails, leading to drought and famine. [Source: J. Madeleine Nash, Smithsonian magazine, July 2007]

Worldwide glaciers are shrinking. Many blame global warming, which seems to be causing more snowfall in the winter but more melting in the summer. Glaciers have almost vanished from Africa and Papua New Guinea

In the Caucasus half of all glaciers have disappeared in the last 100 years. Mt. Kilimanjaro’s ice cap has shrunk by half in the last 40 years and by 80 percent in the last 100 years. By some estimates it could be ice free in as little as 15 years. Glaciers in the some parts of the Alps and the Andes are shrinking at an alarming rate and some worry they could disappear in the coming decade.

In the 1980s and 1990s glaciers in the Alps have been melting faster but ice covers in Scandinavia, Greenland, Iceland and New Zealand have been growing. In 2008, a total of 70 Swiss glaciers were retreating and five were advancing according to the Swiss Glacier Monitoring network. The Aletsch glacier, the largest in the Alps and a major water source for the Rhine, has been retreating for about 150 years yet it still holds 27 million tons of ice, enough to fill 12 million Olympic-size swimming pools.

Run off from melting glaciers and ice caps is raising sea levels by 1.2 centimeters a year. Estimates vary but glacier and mountain caps could contribute 70 centimeters to global sea levels if they were all to melt. The melting of glaciers isn’t necessarily tied to global warming. Scientists say it can take decades for a glacier to respond to warming and that melting is occurring is still partly the warming after the Little Age from 1450 to 1890.

The number of glaciers in Glacier National Park in the United States has dropped from 150 in 1910 to 30 today and most of the remaining ones have shrunk by two thirds. Glaciers in the park are disappearing so quickly they could be gone by 2030. J. Madeleine Nash wrote in Smithsonian magazine, “Worldwide, a massive loss of ice... is now in progress, from Alaska to Patagonia, from the Rockies to the Alps. Even more disturbing, the great ice sheets that cover West Antarctica and Greenland are showing signs of instability. The mile-deep Greenland ice sheet contains enough water to raise sea level by something like 20 feet, and while no one expects all that ice to disappear suddenly, it's clear that its accelerating loss will contribute to rising oceans. [Source: J. Madeleine Nash, Smithsonian magazine, July 2007] 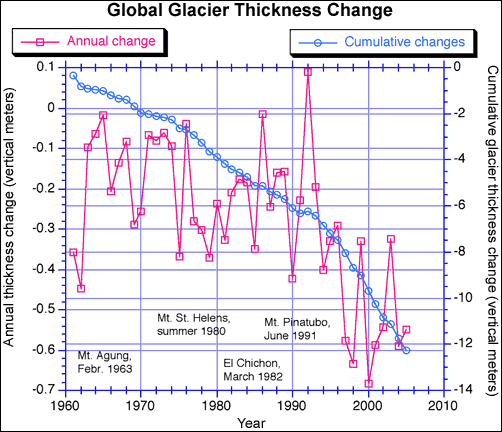 Shrinking glaciers are not the case everywhere. In the 1980s and 1990s glaciers in Scandinavia, Greenland, Iceland and New Zealand were growing. In Alaska some are shrinking but others are stable. Some scientists say the melting of glaciers isn’t necessarily tied to global warming. Scientists say it can take decades for a glacier to respond to warming and that melting is occurring is still partly the warming after the Little Age from 1450 to 1890.

Many glaciers are melting rapidly with the pace having picked up in the few decades according to the World Glacier Monitoring Service at the University of Zurich. Data released in the mid 2000s indicated that mountain glaciers were melting 1.6 times faster than they were in the 1990s. Some glaciers, such as in the Himalayas, could hold out for centuries in a warmer world. But more than 90 percent of glaciers worldwide are in retreat, with major losses already seen across much of Alaska, the Alps, the Andes and numerous other ranges, according to researchers in the USA and Europe as reported by AP. Some scientist predict that smaller glaciers in the Alps will disappear and large ones will be reduced 30 percent to 70 percent.

Lonnie Thompson, a glaciologist at Ohio State University, told Smithsonian magazine, “"What really stands out is how unusual the last 50 years have been compared to at least the last 2,000 and perhaps the last 5,000 years." Rising temperatures are rapidly reducing the ice that permanently caps high mountains around the world. Well before the end of this century, much, and in some areas most of it, will be gone. The loss is a harbinger of even larger, potentially catastrophic, consequences.” [Source: J. Madeleine Nash, Smithsonian magazine, July 2007]

The world's mountain glaciers are melting faster now than in the 2000s, losing 31 percent more snow and ice per year than they did 15 years earlier, according to three-dimensional satellite measurements of all the world’s mountain glaciers published in a study released April 28, 2021 in the journal Nature. Seth Borenstein of Associated Press wrote: Using 20 years of recently declassified satellite data, scientists calculated that the world’s 220,000 mountain glaciers are losing more than 328 billion tons (298 billion metric tons) of ice and snow per year since 2015, according to a study in Wednesday’s journal Nature. That’s enough melt flowing into the world’s rising oceans to put Switzerland under almost 24 feet (7.2 meters) of water each year. [Source: Seth Borenstein, Associated Press, April 29, 2021]

“The annual melt rate from 2015 to 2019 is 78 billion more tons (71 billion metric tons) a year than it was from 2000 to 2004. Global thinning rates, different than volume of water lost, doubled in the last 20 years and “that’s enormous,” said Romain Hugonnet, a glaciologist at ETH Zurich and the University of Toulouse in France who led the study.


Kilimanjaro glacier retreat “Almost all the world’s glaciers are melting, even ones in Tibet that used to be stable, the study found. Except for a few in Iceland and Scandinavia that are fed by increased precipitation, the melt rates are accelerating around the world. Half the world’s glacial loss is coming from the United States and Canada. Alaska’s melt rates are “among the highest on the planet," with the Columbia glacier retreating about 115 feet (35 meters) a year, Hugonnet said. Klinaklini glacier in British Columbia, Canada and the adjacent icefield lost about 15 gigatons of water from 2000-2019 and the rate of loss accelerated over the last five years of the study. According to U.S. National Park Service research Exit Glacier in Seward, Alaska, which has retreated approximately 1.25 miles over the past 200 years.

“The near-uniform melting “mirrors the global increase in temperature” and is from the burning of coal, oil and gas, Hugonnet said. Some smaller glaciers are disappearing entirely. Two years ago, scientists, activists and government officials in Iceland held a funeral for a small glacier. “Ten years ago, we were saying that the glaciers are the indicator of climate change, but now actually they’ve become a memorial of the climate crisis,” said World Glacier Monitoring Service Director Michael Zemp, who wasn’t part of the study.

“The study is the first to use this 3D satellite imagery to examine all of Earth’s glaciers not connected to ice sheets in Greenland and Antarctic. Past studies either only used a fraction of the glaciers or estimated the loss of Earth’s glaciers using gravity measurements from orbit. Those gravity readings have large margins of error and aren't as useful, Zemp said.

Only about 100 glaciers globally are monitored with regular “mass-balance” measurements that reflect how much glaciers grow and retreat from one year to the next. Veteran glaciologist Ian Allison told Reuters, “We probably know less about the total volume of glaciers than we do about the big ice sheets in Greenland and Antarctica because a lot of it is in small mass areas and a lot of it is inaccessible.” Most of the ones that are observed are monitored by the Switzerland-based World Glacier Monitoring Service.

Kurt Lambeck, President of the Australian Science Academy, told Reuters, “There is no serious information on the state of melting in the glaciers in the Himalaya-Tibetan complex.” The high altitude and remoteness of the glaciers makes studying them difficult. To help fill in the gap, the Indian government recently established the National Institute of Himalayan Glaciology in Debra Dun, northern India. 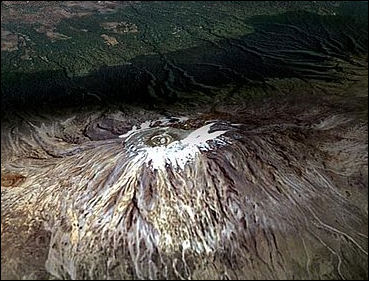 Kilimanjaro glacier retreatBut even with that there is shortage of glaciologists. Of 30 to 40 Indians who gained a glaciology PhD in the past 20 years, only one is still working in the field — and that is Dr Shresth Tayal. When he took 15 of his students up to Rathong he had to turn back early because 14 developed health problems. TERI has now enlisted the help of the army-run Himalayan Mountaineering Institute to train students, and to provide the logistics on field trips.

Another problem was selecting the benchmark glaciers, which had to be small enough to study, relatively accessible and representative of all Himalayan micro-climates. It chose Rathong for the eastern Himalayas, Chotta Shigri in Himachal for the central section, and Kolahoi in Kashmir for the west. The challenge then was to get the equipment on the glaciers, a particularly tricky task in politically-sensitive borders along India, Pakistan, Nepal and China. Dr Tayal also has to take all his equipment on foot, in much the same way as the British explorers in the 19th century.