the area around
the Sony showroom GINZA (between the Imperial Palace and Tokyo Bay) is Tokyo's famous bright lights and big prices commercial and shopping area. The most well known spot in Tokyo, it is where you can find $150 cantaloupes, $3,000-a-night hotel suites, and $800 Italian shoes. It is best visited at night when it is lit up with "galaxies of neon advertisements." Among the most popular places are the Ginza Apple Store and Uniqlo’s flagship store.

Ginza is defined by Harumi, Chuo and Sotobori streets and covers an area that extends for about 600 meters from east to west and 1.1 kilometers from north to south. Closed to traffic every weekend between noon and 5:00pm, the main streets are lined with massive department stores, upscale boutiques, and fancy nightclubs. In the side streets around it are plush designer shops, art galleries, high tech showrooms and more than 1,000 restaurants.

There aren't many museums, shrines or temples or things of that nature in Ginza. The main landmark is semicircular Wako Cascade at Ginza 4-chrome. In recent years some of the luxury shops have folded and been replaced by American coffee shops and fast food chains, taking a little of the glamor away from the place, while new stores like Bulgari Ginza Tower and Chanel Ginza, designed by architect Peter Marino, have opened, bringing back some of the luster. Websites: Wikipedia Wikipedia ; Wikitravel Wikitravel ; Ginza Concierge ginza.jp ; Tokyo Essentials tokyoessentials.com ; Japan Guide www.japan-guide.com Ginza Map: Tokyo Pocket Guide tokyopocketguide.com 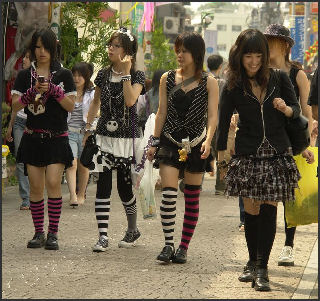 girls in Shibuya in the 1990s
Electronics, manga and anime enthusiasts head to Akihabara, where electronics and parts for any conceivable appliance or audio-visual equipment are stocked in abundance. Shinjuku and Ikebukuro are also famous place for shopping. For the fashion-conscious, whether haute couture or the latest fad, the connecting Harajuku, Omotesando, Aoyama, Shibuya area is where you will more than likely find that special boutique with just what you wanted.

Harajuku is popular with young people especially its famed Harajuku girls and has tons of trendy shops. Takeshita Street in Harajuku is filled with stores with vintage Levis, hundred-dollar T-shirts and the latest street fashions. On the weekends and after school it is mobbed with Japanese teenagers. Cat Street, which connects Harajuku to Shibuya, is regarded by some as the hippest street in Tokyo. It and its alleys are lined with boutiques, fashionable cafes, cheap restaurants and interesting alterative shops. See Arts, Culture...Fashion, Street Fashion.

Nakano Broadway (5-minute walk from Nakano Station on the JR and subway Tozai Lines) is a shopping center with many stores specializing in animations, comics, figures, costumes for anime characters, and so forth. Tel: 03-3388-7004 URL: Website: nbw.jp

Aso Bit City (5-minute walk from Akihabara Station) is a large department store of games, books, DVDs, CDs and toys. You can experience some of the latest models of game machines, software and CDs. Hours Open: 10:00am-9:00pm Tel: 03-5298-3581

Akihabara (JR Akihabara Station, second stop from Tokyo Station on the JR Yamanote Line) is Tokyo’s “Electric Town.” Arguably the world's largest and most famous electronics district, Akihabara is a mecca for Otaku — a kind of geek that is particularly into anime and computer games. Some are also into “Cosplay.” There are many anime related stores where you can find animation figures, costumes and manga. It is a good place to get electronic products at reduced prices. The street in front of the station is dotted with stores offering almost every kind of electric and electronic device imaginable, including a lot of stuff you won't see in your home country. Most of stuff has been marked down 20 percent or more.

Akihabara is more than a tourist trap or shopping area. It' is a cultural hub. The otaku mecca changed from an electronic district to a software town and is now one of Japan’s leading pop-culture district. It is ground zero for otaku (nerd) culture. It is chock-a-block with small but influential, back-alley anime and manga stores and maid cafes. Within a several block area there are over 80 maid cafes.

On Sundays and holidays some of Akihabara’s streets are closed to traffic. In recent years these areas have attracted “cosplay” performers — people who dress up like manga and anime characters and put on street performances. Some regard the performances as a nuisance because they disrupt the flow of shoppers and there has been some effort to control them. One woman was arrested for putting in a show that climaxed with exposing her underwear. On weekend nights large crowds gather on the east side of JR Akihabara Station to see live street performance of bands and dance groups. Websites: Akihabara Tourism Organization akihabara-japan.com ; Akihabara News akihabaranews.com ; JNTO web magazine jw-webmagazine.com/akihabara-area-ultimate-guide ; Go Tokyo gotokyo.org ; otaku story in the Washington Post Washington Post

Shinjuku (Shinjuku Station) is a high-rise shopping and entertainment hub. JR Shinjuku Station is an immense terminal, which serves the most passengers of any station in Japan. Shinjuku is split into three major areas: 1) Shinjuku Street, 2) the Kabukicho district, the main sleaze area, and 3) the area on west side of Shinjuku station. Shinjuku Street (pedestrian-only on Sundays) is a shopping area lined with large department stores, fashionable specialty shops, restaurants and bars. Golden Street was a center the avant garde scene in the 1960s. Now it features dozens of little bars ensconced in spaces formally occupied by brothels. Many of the bars have regular customers who often look a bit shocked when strangers or foreigners come in.

Harajuku (one stop from Shibuya on the JR Yamanote line) is a neighborhood popular with fashion-conscious teenagers, who tend to congregate around the record stores and clothes shop. There are also many trendy shops, such as Condomania, restaurants and tea shops in the area. The pedestrian overpass from Harajuku station to Meiji Shrine and the narrow alley of Takeshita Dori is favorite gathering place for young Japanese who like to dress in outrageous cosplay costumes and relish in drawing attention to themselves. Kiddyland is good place to check out the latest weird gadgets.

Harajuku is a collective term for the area that stretches from the Harajuku Station to Omotesando. On the west side of JR Harajuku Station, there is a wood of the Meiji-jingu Shrine that is famous for a Japanese iris field where irises bloom in profusion in the rainy season, June and a treasury that stores the articles Emperor Meiji cherished in the late 19th century. The east side of the station is known nationwide as the young people’s town. On Takeshita-dori Street, in particular, this narrow pedestrian packed with young teenager in weekends.

Omotesando (Chiyoda subway line, Omote-sando Station, at the end of Harajuku) is a wide boulevard dubbed the Champs-Élysées of Tokyo. Located in the districts of Shibuya and Minato, it runs from Harajuku to Aoyama and is famous for its designer-label shops and for the buildings of the designer-label shops, many designed by famous architects. It used to be closed off to traffic but now is a busy thoroughfare filling with cars. While its main clientele are older fashionable adults it also has places that attract younger, trendier crowds. There are a large number of cafes, which are fine places to watch the street fashion parade. If you have time check the pet salons that offer aromatherapy and reflexology for dogs.

In Omotesando and its adjacent Aoyama, fashion designers began to set up their offices and studios after the Tokyo Olympics in 1964. Since then, more and more fashion stores for adults, fashionable coffee shops and restaurants have been built in this area. Aoyama with its zelkova tree lined avenue has the atmosphere that resemble those in European streets.

Oriental Bazaar, next to the Dior building, has been a fixture of Omotesando since 1954. It is regarded as Tokyo’s largest and best souvenir and craft store and is a good place to stop to get gift for all the folks back home. Nearby is the flagship store for Kiddyland, one of Japan’s largest toy store chains. Also worth checking out are the green-glass-fronted V28 building near Harajuku station, which is open 24 hours and houses a Zara fashion store and Gold’s Gym; the Audi Forum Ice Cream building, which features an asymmetrical glass facade, with new car models and classic cars displayed in some of the windows; and the UT Store Harajuku, which resembles a neon stock exchange.

Roppongi (centered around Roppongi Intersection, three kilometers from Ginza) is a nightlife area with a lively and international atmosphere. The bars and snack bars are open to the wee hours of the night. Many foreigners live here and party here. There is freer, less closed atmosphere than in some other Tokyo entertainment districts. In the old days many U.S. servicemen were based around here. It has traditionally been the best place in Japan to score drugs. Many of the nightclubs have African guards. The landscape and atmosphere of the neighborhood has been changed dramatically by Roppongi Hills. Roppongi's name translates into "six trees," from the samurai families who lived here during feudal times.

The town of Roppongi is filled with popular nightspots with visitors from abroad. There are many international shops and restaurants.This area is now developing into an artistic and cultural center.John M. Glionna wrote in the Los Angeles Times, “Once a U.S. serviceman's haunt, the Roppongi district became a respectable business district, then fell back into disrepute, the gentle women in kimonos giving way to mobsters and drug dealers. It's now home to the yakuza, hostess bars, drink spiking and murder. Good or bad, in this famously safe city, Roppongi stands out: elegant one block, seedy the next, a multicultural meeting spot known as Tokyo's most cosmopolitan dusk-to-dawn adult playground. See Crime[Source: John M. Glionna, Los Angeles Times, January 26, 2010]

After World War II, the area was a popular haunt for U.S. servicemen, and visiting military men still sometimes abound here. When the economy was good, foreign-born stockbrokers and stock traders wandered out of their offices in the upscale Roppongi towers to spend their money here, attracting a parade of young, single Japanese women. Website: Japan Guide japan-guide.com

Odaiba (north of Tsukiji, reached by Yurikamome monorail from Shimbashi Station) is a futuristic shopping and entertainment center built on an island reclaimed from a landfill and Tokyo Bay in the 1980s. Comprised of glass-and-steel towers, geometric structures and covered walkways, it draws large crowds and brings to mind a settlement on another planet.


Fuji building at Odaiba Venus Fort is a shopping mall oriented towards women. Featuring squares and fountains in an attempt to evoke the atmosphere of an 18th century European, it contains expensive restaurants and upscale shops. It is popular place for dates and lady's days out. Every two hours the cloud-painted ceiling simulates a sunset. One reason for this is that studies have shown customers spend more money near dusk. Other themed shopping areas include Aqua City, and Palette Town. Almost every week one of them sponsors some kind of event and entertainment. Worth checking is large manga and anime themes shop with lots of books and magazines as well as all kinds of merchandise with favorite manga and anime characters. Websites: Wikitravel Wikitravel ; Japan Guide japan-guide.com Odaiba suggestions Sugihara.com Odaiba Map: Japan National Tourism Organization tokyo.grandnikko.com