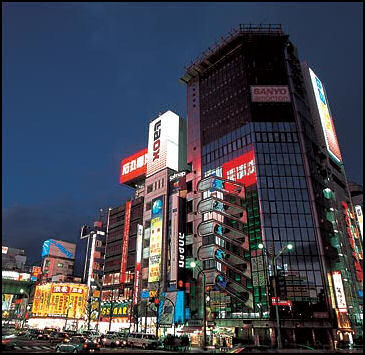 Shopping in Tokyo is a trip and an experience to remember. The sheer volume of merchandise and the endless variety of constantly changing goods attractively displayed have created a consumer’s paradise. Tax-free shops are plentiful in Tokyo as are 100-yen shops that offer a wide variety of miscellaneous everyday items and small souvenir shops. For that special souvenir, try one of the flea markets held once or twice a month at certain temple and shrine compounds, where everything from genuine antiques to yesterday’s bric-a-brac are offered for sale.

Department store have a dumbfounding array of products both Japanese and Western style, from flowers and food to Kimono and brand name designer clothes. They also frequently sponsor a variety of art exhibitions and cultural events. They usually have English-speaking assistants, and packing and shipping services. At the other end of the spectrum are the arcades in or near the major hotels. Discount shopping is also to be found in the larger supermarkets and in the wholesale Asakusabashi (for traditional goods) and Kappabashi (for any kind of restaurant/dining/ tableware; plastic food display) districts. Tokyoites are discriminating shoppers, and this is reflected in the shopping scene.

Japanese currency is Yen (¥), which convertible at the airport, international hotels and major banks. A 10 percent sales tax is added to most goods and services. Cash and Credit Cards Cash can be carried in Tokyo without anxiety. You will need cash for smaller dining spots and stores. Major credit cards are widely accepted in Tokyo but not as widely accepted as the U.S. Major foreign credit, debit and cash cards can be used at some Post Office ATMs marked with the ‘International ATM Service’, some Seven Bank ATMs that can be found in Seven-Eleven convenience stores and some AEON Bank ATMs.

The Ginza, traditionally the most exclusive shopping area with a number of department stores and specialty shops, is being challenged by the Aoyama, Shibuya, Harajuku and Shinjuku areas where the young, trendy and affluent gather during the day. There is also high-end shopping Roppongi Hills and Tokyo Midtown.


Armani in Shibuya The Ginza District is Tokyo's most famous upscale and commercial shopping area but by no means its only one. Foreign stores in Ginza include Bulgari, Hermes, Burberry, Cartier, Harry Winston, Louis Vuitton and Tiffany. Other shopping areas include the Hibiya shopping and entertainment quarter, Hibiya City, the 400-shop Ameyoko discount shopping arcade, Tokyo Station, Shibuyu, Shinjuku, and Asakusa.

Omotesando (part of Harajuku) is a wide boulevard dubbed the Champs-Élysées of Tokyo. It boasts designer shops, boutiques and Parisian-style cafes and restaurants. It has become dominated by foreign designer label stores. Gucci, Armani, Prada, Louis Vuitton and Chanel have stores here. Burberry, Dior and Louis Vuitton have shops in Aoyama, which is sometimes called Killer Street and is where the architect Tadao Ando has a new project. In and around Brand Street you can find the fashionable shops like Undercover and Comme des Garcons.

Electronics, manga and anime enthusiasts head to Akihabara, where electronics and parts for any conceivable appliance or audio-visual equipment are stocked in abundance. Shinjuku and Ikebukuro are also famous place for shopping. For the fashion-conscious, whether haute couture or the latest fad, the connecting Harajuku, Omotesando, Aoyama, Shibuya area is where you will more than likely find that special boutique with just what you wanted.

Harajuku is popular with young people especially its famed Harajuku girls and has tons of trendy shops. Takeshita Street in Harajuku is filled with stores with vintage Levis, hundred-dollar T-shirts and the latest street fashions. On the weekends and after school it is mobbed with Japanese teenagers. Cat Street, which connects Harajuku to Shibuya, is regarded by some as the hippest street in Tokyo. It and its alleys are lined with boutiques, fashionable cafes, cheap restaurants and interesting alterative shops. See Arts, Culture...Fashion, Street Fashion.

Nakano Broadway (JR Nakano Station) is a four-story building with 500 stores, offices and restaurants. There are around 120 vintage clothing shops within a half kilometer of the south side of JR Koenji Station. Kanda (one stop from Tokyo Station) is near Jimbocho bookstore street, which has a large selection of new and second-hand foreign and Japanese books on sale. Good places to hunt for antiques are the Shrine markets listed below and Nishi-Ogikubo, Suginama Ward (Nishi-Ogikubo Station). There are about 75 antique shops in this area. Jimbocho in the Kanda area of Tokyo has been dubbed the world's largest antique bookstore district. Rare books and ukiyo-e are sold.

Kappabashi (Tawaramachi subway stop on the Ginza line) is famous for its 160 restaurant supply food where you can buy plastic food, bento boxes and paper lanterns. Sample Shop Maizuu has perhaps the best selection of plastic food. The are also some interesting paper supply stores. Ueno is the home of Ameya-yokocho Market, or "Ameyoko". Situated in the area under the elevated railway from J R Ueno Station to Okachimachi Station, it contains over 500 shops that sell everything from basic foods to high-quality imported goods at reasonable prices, and thus it is always crowded with shoppers.

Markets and Shrine Sales in Tokyo

For that special souvenir, try one of the flea markets held once or twice a month at certain temple and shrine compounds, where everything from genuine antiques to yesterday’s bric-a-brac are offered for sale.Weekend or Sunday "shrine sales" (something called flea markets in English publications) are held on the grounds of some of Tokyo's main Shinto shrines. They offer all sorts of things. Call 81-3-3201-3331 for dates and market sites. Check English newspapers for schedules.

The Boro Ichi flea market near Tenso Shrine (Kamimachi Station) is 400 years old and one of the most famous in Tokyo. Among the things on sale are old kimonos, ceramics, “boro” (old clothes), samurai buckles and knickknacks. Setagaya Boro Ocho is a 400-year-old market in Setagaya Ward that is being considers as an intangible folklore cultural asset. It offers a wide range of household goods for four days in mid December and mid January.

Junior Station just across from Shibuyu Station is a seven-story shopping complex filled with shops aimed to appeal to primary and middle school girls Nakano Broadway is a shopping street in Nakano Ward that houses many shops selling items related to pop idols, manga and anime characters.

Tokyo Character Street is located on the Yaesu side of JR Tokyo station. It is an 80-meter-long underground street with 15 shops offering hundreds items bearing likenesses of anime figures like Doremon and Ultraman and new characters like NHK mascots Zoomin and Charmin and Monkey D. Luffy from “One Piece” as well characters like Totoro form Miyazaki's Studio Ghibli. Sokendo is a shop that specializes in samurai swords. It is located at 28-1, 6-chrome, Jingumae, Shibuya-ku, Tokyo, tel. (03)-3499-8080, Website www.sokendo.net

Anime and Manga Shopping in Tokyo

Nakano Broadway (5-minute walk from Nakano Station on the JR and subway Tozai Lines) is a shopping center with many stores specializing in animations, comics, figures, costumes for anime characters, and so forth. Tel: 03-3388-7004 URL: Website: nbw.jp

Aso Bit City (5-minute walk from Akihabara Station) is a large department store of games, books, DVDs, CDs and toys. You can experience some of the latest models of game machines, software and CDs. Hours Open: 10:00am-9:00pm Tel: 03-5298-3581

Ultraman World in the underground shopping complex at Tokyo Station, offers every original product of Ultraman, the alien buster, one of the most popular characters in Japan. Tel: 03-3215-0707 Hours Open: 10:00am-8:30pm

Outlet Malls in the Tokyo Area

Gotemba Premium Outlets (south of Tokyo, in Shizuoka Prefecture, 100 minute bus ride from Tokyo or Shinjuku) is arguable the most beautiful outlet mall in Japan, with Mount Fuji towering over it. It has over 200 shops and has a wide selection of men’s and women’s clothes, boasting brands such as Céline, Alexander Wang, Abercrombie & Fitch and Gucci. Almost everything is at least 50 percent off in the outlet stores of the famous Isetan and Mitsukoshi department stores.

Mitsui Outlet Park Kisarazu (45 minutes’ direct bus ride from Tokyo Station) is located in Kisarazu, Chiba Prefecture. Mitsui Outlet Park Kisarazu opened near the Tokyo Bay Aqua-Line Kisarazu-Kaneda Interchange in 2012. It has about 300 shops and outlets. According to Mitsui Fudosan Co., the developer, the site area is about 215,000 square meters, 4.5 times the size of Tokyo Dome. All buildings are one-story and the grounds are landscaped with palm trees. International brand names such as Burberry and Coach and other shops have opened branches at the mall. [Source: Yomiuri Shimbun, April 14, 2012]

Mitsui Outlet Park Makuhari (from Tokyo Station, 30 minutes on the JR Keiyo Line to Kaihimmakuhari Station) is a favorite among tourists from Asia because it is easy to get to. According to Japan Live: “Several famous brands sell their products at factory prices here, so there’s many a bargain to be struck especially with sample products and clothes from the last season! Around 93 out of 137 shops offer tax exemption service, including a wide variety of international brands (Coach, Bally, Michael Kors), Japanese brands (Nice Claup, Beams), and sports brands (Adidas, Puma, Under Armour). Make sure to bring your passport! Of course, shopping makes hungry and a large number of restaurants will make sure to keep you fed and energized. Look forward to dining at Hawaii’s Honolulu Coffee or Pizzeria 32.” [Source: Live Japan, February 2020]