Japan is very good at conserving water even though it has a lot of water and doesn’t really need to except in cases of localized droughts. High water prices create an incentive for ordinary people to conserve water. One way Japanese conserve water is by using bath water for several baths and then using the leftover water for washing clothes.

Families in the United States and Japan use 10 times as much water as families in Kenya and dry areas of China. One study found that a three-member Japanese family used 280.7 liters a day compared to 223 liters for a family of 11 in Kenya and 800 liters for a family of four in the United States. Flush toilets account for 24 percent of total household water use. Bath and showers account for 26 percent. Kitchen use accounts for 22 percent.

In the 70s only 15 percent of Japanese homes were connected to sewers. 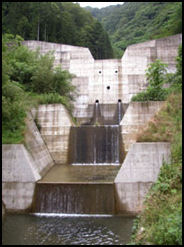 little dam There are lots of dams in Japan. They have been built to generate electricity, control floods and provide irrigation water for agriculture. Japan uses it water supplies very cleverly. Often getting energy, irrigation water, and drinking water from the same dam. Even so many Japanese feel there are too many dams and environmental groups have joined with farmers worried about having their land submerged to protest the construction of new dams.

Some prefectures have announced a cessation of all dam projects after they were deemed unnecessary for water supplies and flood control. A concrete dam proposed for a major river in Kumamoto was axed by the governor there on the grounds that it world upset the flow of rivers there that attract large numbers of tourists and fishermen seeking ayu sweetfish. See Nagano mayor.

In 2008, Japan announced plans to build 182 new hydroelectric projects by 2030, up from the 38 it had originally projected, to create construction jobs and boost total hydroelectric power generation to 78.1 billion kilowatt hours.

Tokuyama Dam, Japan’s largest dam in term of water capacity, was opened in May 2008. Plans for the dam, which can hold 650 million tons of water, were announced in 1957 though construction did not begin until 2000. The dam cost $3.5 billion.