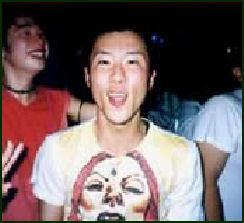 There are lost of excuses for partying in Japan: end-of-the-year parties, beginning-of-the-year parties, farewell parties, welcome parties, flower-viewing parties, barbecues, picnics, festivals, temple and shrine festivals holiday get togethers. They often involve a fair amount of eating and drinking. Various groups have their own partes. Some people belong to many groups and this means they have a lot of parties to go to.

A night out in Japan often consists of visits to four or five places, perhaps beginning around dinner time with a meal at a crab restaurant, followed by a hotel bar, sushi, a drag-queen show and a hostess club.

In Japan, there are a wide range of cafes that cater to special interests such as hanging with girls in maid costumes, playing with cats, making models and picking up school girls.

Tokyo nightclubs are required to close at 1:00am. Some stay open later than that. In November 2005 clubs in Roppongi sought permission to stay open until dawn.

Laughter festivals have been held in Japan since the Kamakura era in the 13th century to offer thanks for good fortune,

Karaoke and Singing in Japan 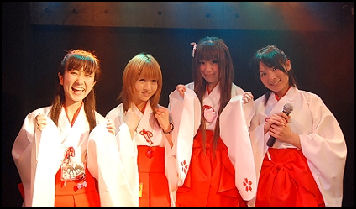 Shinto shrine girls at a karaoke Kaoroke is a Japanese invention. The word is a combination of the Japanese words for "empty" (“kara”) and "orchestra" (“oke”). Particularly popular in Asia and Asian neighborhoods all over the world, karaoke bars allow patrons to sing their favorite songs along with a synthesized instrumental version of the song with no voice track. Urban legend has it that karaoke means “tone-deaf.”

Karaoke singers sings into a microphone as the lyrics flash across a video screen, often while swimming squids or naked women are flashed in the background. The singer's voice is often distorted with a vibrato warble and sometimes a number appears on the video screen after the song is over. This "score" is usually based more on loudness than singing ability. In any case, even horrible singers are generally applauded by the Japanese for their effort.

Like other Asians, the Japanese enjoy singing. Karaokes are found in every town and on almost every city block; popular television shows often feature actors and sumo wrestlers singing karaoke-style enka hits; and parties are often a succession of guests coming to a microphone and singing songs. Japanese often ask people they meet: What’s your “ohaku”—“Ohaku” means your “one best song.”

Singing is a way people relax. The tension of business negotiations is often relieved by a visit to a karaoke club, after which everyone feels better and the deal is made. One survey found 83 percent of teenage girls and 63 percent of teenage boys sing karaoke. Many Japanese like to sing alone. It s not unusual for an individual to go to a karaoke by himself or herself.

The karaoke machine was invented in 1971 by a 31-year-old former drummer named Daisuke Inoue, who plugged an eight track tape player into an amplifier.

Inoue was named by Time Magazine as one of the most important Asians of the 20th century and was awarded the Ig Nobel Peace Prize in 2004 “for providing an entirely new way for people to learn to tolerate each other.” Born in Osaka in 1940, he played the drums in high school and ran a sidewalk pancake stand for a while.

Inoue was never recognized as the inventor of karaoke until 1996 when was tracked down by a Singaporean documentary crew. He never used a karaoke machine himself until his 59th birthday in 1999. The last time anyone checked he was living at a second-story walk up in a suburb of Osaka. 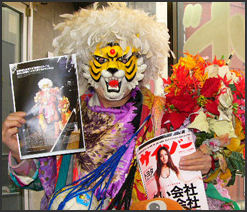 Tiger Man, a street
character in Tokyo Street performers in Tokyo can make pretty good money. One foreign classically trained musician told the Daily Yomiuri earned up to $800 in a good afternoon. After 10 years at it he saved enough money to retire to his home country with his family and buy a house. Another musician, a violist, said he once earned $1,500 in a six hour session. A fire eater who worked outside ShinYurigoaka said he earned as much as $500 a day.

Buskers who work in Tokyo now have to get licenses. In Osaka they perform at the bridge at Umeda.

Pop music artists that got their start on the streets the rock band Do as Infinity and the guitar and harmonica duo Yuzu.

“Chindonya” are traditional street musicians that were fired by businesses to advertise their products. They wore traditional costumes and played traditional instruments such as the “chindon”, a small metal gong, to attract customers and then gave out flyers and delivered a message for their advertisers. They originated in the late 19th century. About two and half dozen groups still exist. Most of their members are in their 60s and 70s.

Fireworks are very popular in Japan. Each year around 7,000 fireworks displays are scheduled nationwide, mostly in July and August, at a cost an around $135 million (or more than $1 for every Japanese man, woman and child).

Fireworks have been around at least since 1589, from which there is a record of a damyo enjoying an exhibition of Chinese-made rockets. Fireworks were so popular in the Edo Period that they were banned because so many fires were caused by them. In the 19th century fireworks were regard as means of purifying the land after a plague or famine.

Putting on a yukuta and heading down to a river bank or seashore to eat grilled octopus and watch a fireworks display is a cherished summertime activity in Japan . The largest and most famous shows features as much as $2 million worth of fireworks that explodes in the shapes of chrysanthemums, tulips, waterfalls, fires, cartoon characters and even Mt. Fuji.

Many of fireworks used in shows are produced in China. Many also are made by 186 mostly family-run fireworks manufacturers in Japan. Bottle rockets and other small fireworks are sold at local toy stores.

There are two main fireworks competitions in Japan: 1) the Omagari no Hanabi in Daisen in Akita Prefecture in late August and 2) the Tsuchiura All-Japan Fireworks Competition in Tsuchiuru in Ibaraki Prefecture near Tokyo in early October. The last two years both competitions have been won by the fireworks company Nomura Hanabi Kogyo, which is known for producing fireworks with vivid colors that explode in almost perfect circles. In 2007, the company produced an unprecedented “goeshin” firework that produces five layers of color plus an outmost circle.

Nomura Hanabi Kogyo uses advanced chemical and computer technology to create traditional “star mine” fireworks and “katamono” fireworks. The latter are used to create images in the sky of animals and objects such as eyeglasses and a heart with an arrow shot through it. Among the company’s competition creations are “Fairy in the Skating Rink” inspired by the Olympic gold-medal-winning skating performance of Shizuka Arakawa. Nomura’s main competition comes from Nagano-based Beniya Aoki Enka ten.

Nomura Hanabi Kogyo produces fireworks at a 10,000 square eer site in Mito with 15 workshops, each for different stage of production. In one workshop, for example, workers put pyrotechnic pellets — known as stars — into spheres. In another, shells are completed. The pellets are between one and three centimeters in size. They can take as long as two months to make through a process of applying coats of powdered material to a core comprised of rape seed or plaster. The coating material is a mix of metallic chemicals such as flame coloring agents, combustion agents and oxygenization agents. The exact recipes vary from company to company and are carefully guarded secrets. 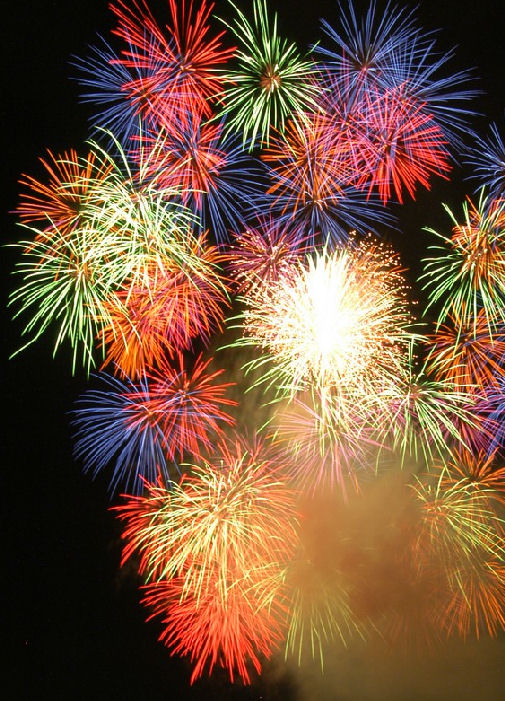 Nomura Hanabi Kogyo pyrotechnic an Yoichi Nomura told the Daily Yomiuri, “Stars are really the basis for creating fireworks. So its important to use appropriate chemical products and make the size of each star as similar as possible. If not, we can’t produce fireworks displays exactly as we plan them.”