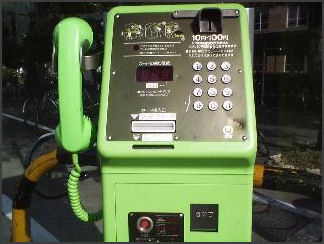 Japanese pay phone CEATEC (Combined Exhibition of Advanced Technologies) in October is Japan’s largest electronics and communications show. Among the showstoppers at the 2009 CEATEC were cell phones that gave users advise on their gold swing, handsets that allowed users to send e-mail to people nearby by moving their arm in a throwing motion and devices that transmit data through the human body.

A message in a bottle thrown in the sea in Shimonoseki on the southern tip of Honshu in 1979 was found 29 years late on a beach in Aomori prefecture on the northern end of Honshu. The message — written on a ¥20 yen postcard by students at a Shimonoseki middle school — read return the postcard to the school.

The Japanese post office was set up in 1870 and modeled after the British system. It has traditionally been run by prominent local families recruited by the government and operated like franchises, with jobs often passed down from one generation to the next. This system started to break down when young people began migrating the cities in larger numbers.

In rural areas Japanese post offices collects villagers' savings and mail. It will even collect money and packages if the villagers are too busy to do it themselves. “We know each other and trust each other,” one forth generation postal worker in a small mountains village told the New York Times.

Post offices serve as banks and insurance companies. Volunteer postmen serve as firefighters, report on potholes and traffic accidents and help out elderly people by picking up their bank books and bringing them back cash. Business in some places is conducted on a barter system known as “dan-dan” (“thanks again”).

Some convenient stores provide many of the services of post offices.

Japanese mailmen sometimes have a hard time because of the irregular address system in Japan.


letter-mailing box Nearly all Japanese have their savings in post office savings accounts. There are nearly $3.8 trillion invested in low interest postal savings account loans. Japan Post also hold ¥140 trillion of government bonds, making it the biggest owner of Japan’s national debt. If the Japanese postal system is regarded as a bank it would be the world's largest and some say the worst run.

Public corporations such as the postal services underwrote much of the economic activity in the 1990s but were very unprofitable. Large amounts of money from the system has been used by the government to fund pork barrel projects and finance bridges to nowhere.

The postal system was regarded as a major obstacle to prosperity and economic growth because it sucked up household savings and wanted and used the money efficiently. 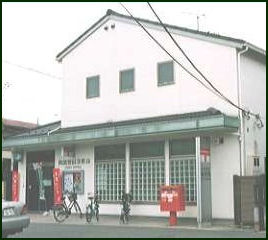 Rural postal employees often handed their position from father to son. They have also traditionally been among the LDP’s most loyal supporters but are less important than they used to be because such a large percentage of the population is urbanized.

The Japanese postal system in many ways was the crux of the Iron Triangle support system for the LDP. It gave out loans under favorable terms to farmers, small businesses, and fishing and forestry enterprises in return for electoral support. Politicians were able to tap into to support their pet projects.

Koizumi proposed privatizing the banking and insurance businesses from mail delivery in 2017. The year 2017 is a long time away There will be many opportunities to amend the process.

Prime Minister Juichiro Koizumi’s primary reform goal was to overhaul Japan Post, Japan’s postal system. In the early 2000s, Japan Post was Japan’s largest employer with 400,000 employees, 25,000 outlets nationwide, almost the number of all of Japan’s bank branches combined, and had assets of $3.1 trillion. It was the nation’s main lender and insurer, with $1 trillion in life insurance policies, and effectively the largest savings bank in the world. It was a source of funds for wasteful public works projects and funds used by LDP politicians to support their patronage systems.

In September 2004, a plan was adopted to split Japan Post into four firms for 1) mail delivery, 2) savings, 3) life insurance and 4) post office network management under a holding company in September 2007. 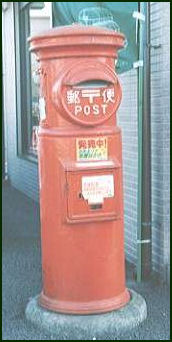 Koizumi’s initial postal reform bill was significantly watered down. To get the bill passed Koizumi made a number of compromises such as failing to impose penalties against those who broke the rules of the reforms. Koizumi also forced members of his own party to accept other unpopular changes such as cuts in public spending. His strategy was to force the LDP to accept the changes by raising the threat that he might resign and the party could lose power without him.

The elections were a risky move and regarded as referendum on the postal reform bill. To counterattack the LDP postal “rebels” — 37 lower house members who voted against the postal bills — Koizumi struck them from lists of LDP candidates and fielded “assassins” to take their place. The opposition was caught off guard and had a difficult time developing a strategy. If they went against Koizumi they were seen as objecting to reform. 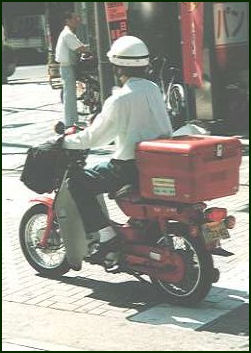 postman In April 2002, the Japanese post office became Japan Post and was removed from the control of the Ministry of Public Management Home Affairs, Posts and Telecommunications. This was supposed to make it leaner and was the first step towards privatization.

Japan Post is Japan’s largest employer with 400,000 employees, 25,000 outlets nationwide, almost the number of all of Japan’s bank branches combined, and has assets of $3.1 trillion. It is the nation’s main lender and insurer, with $1 trillion in life insurance policies, and effectively the largest savings bank in the world. It was a source of funds for wasteful public works projects and funds used by LDP politicians to support their patronage systems.

In September 2004, a plan was adopted to split Japan Post into four forms for 1) mail delivery, 2) savings, 3) life insurance and 4) post office network management under a holding company in September 2007.

It its first six months of operation Japan Post made a profit of ¥277 billion, exceeding forecasts by 29 percent. In fiscal 2008-2009 it posted a net profit of $4.23 billion in fiscal 2008-2009, with Japan Post insurance contributing nearly 80 percent of the profit. NTT was the only Japanese company with a higher profit.

The are now worries that Japan Post will be such a colossus that it will be able to drive out competition, both foreign and domestic.

Norio Kitamura, an executive who spent his entire career at Toyota, was named CEO of Japan Post Service Co. He introduced Toyota management and production methods.

In Japan it is necessary to buy a phone line. Once you have a line you can take it with you if you move to a new place or sell it.

Voice transmissions over fixed phones has steadily declined as more as more people use cell phones and the Internet.

NTT has annual revenues over $100 billion and controls 95 percent of Japan's fixed phone lines. It is also Japan's largest Internet provider and own 67 percent of DoCoMo. Japan's largest cell phone provider. In 2003, NTT posted record profits thanks to the success of cell phone and Internet service businesses. It earns much money from cell phone than fixed line phones.

NTT used to be like the old AT&T in the United States except slower, more conservative and more of a monopoly. Its phone rates were among the highest in the developed world and because there was virtually no competition it has no incentive to lower them. NTT’s high rates were blamed on Japan falling behind in the information technology race. Recent deregulation and compeition in the celll phone market have lessened NTT’s power and control and made it less profitable.

NTT was once a government monopoly. It is now regarded as a private company even though 46 percent (2003) of the company's shares are owned by government and looked over by Ministry of Finance. Many of its executives are former officials in Ministry of Posts and Telecommunication. It is also well connected with the ruling LDP party. Many people believe that NTT needs to be broken up the same way ATT was. NTT was divided into NTT East and NTT West but the break up has been only cosmetic.

In 2010, NTT's acquired Dimension Data, a company based in Sandton, South Africa that provides systems maintenance for corporate information networks in 49 countries. The same years it also acquired a Swedish digital information security company, Secode, for about $23 million. Those deals follow the purchase last year by NTT's mobile phone unit NTT DoCoMo of a 26 percent stake in Tata Teleservices of India for $2.7 billion and almost 80 percent of Net Mobile of Germany for about $51 million.

Communications and Broadcasting Reform in Japan

Regulatory reform in the data communications sector goes back to the 1985 privatization of Nippon Telegraph and Telephone (NTT), the largest domestic carrier. Since then, newly established new common carriers (NCCs) have managed to secure a large share of the long-distance communications market. Keen competition among the NCCs, along with technological innovation, has contributed to significant declines in telephone charges. Mobile telephone use has undergone spectacular growth in the past decade. The handset rental system was switched to outright sales in 1994, in 1996 regulations covering the introduction of new service fee plans were relaxed, and in 1998 authorization procedures for mobile phone use were greatly simplified and application fees were reduced. Such reforms set off a boom in mobile communications, with the number of subscribers jumping from 2.13 million in March 1994 to 119.53 million in March 2011. [Source: Web-Japan, Ministry of Foreign Affairs, Japan]

“As a result of deregulatory measures in 1997, NTT was allowed to enter the international call market, and Kokusai Denshin Denwa (KDD), the primary international carrier, was allowed to enter the domestic market. Rules were drawn up for network connections, and the ban on public-private-public line connections that had been in force was lifted. In addition, in 1998 regulations were abolished concerning foreign ownership of primary telecommunications companies, with the exception of NTT and KDD. In July 1999, NTT was broken up into two local companies, Nippon Telegraph and Telephone East Corporation and Nippon Telegraph and Telephone West Corporation, and one longdistance company. The intense competition resulting from deregulation continues to spur reorganization in the industry, one example being the merger of KDD and two NCCs in October 2000 to create KDDI Corporation.

“Growth in Internet use for business and personal communications is another development supported by deregulation in the communications industry. As of December 2009, the number of Internet users stood at 94.08 million, or 78.0 percent of the population. The proportion of households with a broadband Internet connection was 76.1 percent. The usage rate for fiber-optic cables grew to 54.2 percent as more users switch to fiber-optic broadband Internet. A 1999 revision of the Broadcasting Law made it possible to broadcast various types of data as part of the digital signal even if that data is unrelated to the program’s image and sound content. Digital broadcasting of television and radio was gradually introduced between 2003 and 2006. In July 2011, analog television broadcasting was ended as the nation switched over to digital terrestrial television, with the exception of some prefectures in the Tohoku region which were badly affected by the Great East Japan Earthquake.

Sony's telephone Keyboard answering service allow phoneowners to fight back against crank callers and telemarketers. One key send a 100 decibels earful of sound and another activated a male voice that shouts, "What the — - do you want?"

The Revenge telephone has integrated circuit which runs obscene messages as long as the caller stays on the line. The Selectephone by Sanyo allows you to receive only the calls of numbers that you punch in yourself. [Source: Leonard Cohen, Discover magazine. Cohen has written a book called "283 useful Ideas from Japan”]