HYGIENE AND CLEAN FREAKS IN JAPAN 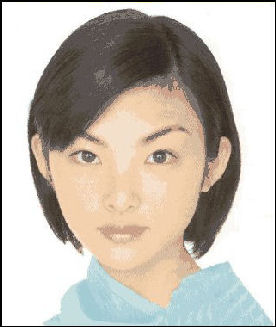 The Japanese view on cleanliness as a virtue is drilled in at an early age. One of the most popular television shows for kids under five is “ Apanman “. Apanman’s primary villain is Baikinman, or “Germ Man” Some sociologists have pointed out that from the time they are infants Japanese children are exposed to “ batchii “ — a baby word for “dirty” — and a view of life that divides the world into “ batchii “ and non- “ batchii “ elements..

There are ear-cleaning salons in Japan. In August 2009 the female owner of one such salon was murdered by a customer who initially harbored romantic feelings towards her and became angry when his request for a date were refused.

“Thermae Romae“ (2012) is movie directed by Hideki Takeuchi based on a popular manga. Hiroshi Abe plays Lucius, an earnest bathhouse designer in ancient Rome. For no apparent reason, he begins repeatedly traveling through time, landing in bathhouses in modern-day Japan. He brings back various useful elements of Japan's bathing culture to win the confidence of the emperor. “ Thermae Romae “ is based on manga by Mari Yamazaki about a Roman architect who specialized is designing pubic baths who is transported to a bathhouse in modern Japan where he finds all sorts of cool things. “ Thermae Romae “ is Latin for “Roman baths.”

Cleanliness is perhaps more important to the Japanese than with any other culture. The Japanese use the same word (“kirei”) for "clean" and "beautiful” and purification is an important element of all Shinto rituals. When Japanese pray for something important they wash their bodies and dress in a white kimono. Sumo wrestlers throw salt to purify the ring and Japanese taxi drivers wear white gloves to indicate the immaculate state of their taxi. When schoolboys want to hurl out the worst insult they can think of, they call someone a "bacteria."

Unusual Japanese products with a cleanliness theme include hair spray that purports to removes sweat and cigarette odor, pills that claim to remove the bad smell from bodily wastes and special hygienic foods for pets.

In New York City, there is group of Japanese that spend their Sunday mornings cleaning up trash in the neighborhoods around their homes. One group of 15 Japanese covers an area of several blocks in the West Village and is out picking up trash even when it rains. One member of the group who is a zen monk told Kyodo News, “It feels really good. I like to clean anyway.” When asked but some of the nastier stuff he picks up he said, “There’s a of lot of glass, needles, condoms...It not really a matter of dirtiness than it is the danger. I used to clean barehanded. Now I wear gloves so a I can pick up more things.”

Despite the efforts that Japanese make towards keeping their bodies clean, they same energy does not go into their homes. Many Japanese homes are cluttered and messy, and have stuff sprawled all over the floors. 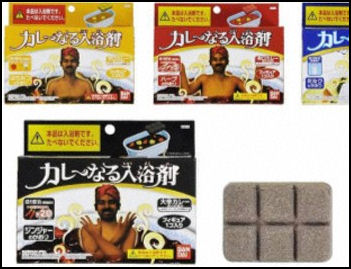 The antibacterial products are so popular that entire aisles in some stores are devoted to them and even then the stores can't keep up with the demand for some products. Most of antibacterial products are simply ordinary products that have been treated with anti-bacterial chemicals. A ball point, for example, that sells 35 cents without antibacterial chemicals can sell for $1.75 with them. One pharmacist told the Los Angeles Times, "In general, 100 yen worth of product can be made antibacterial for one yen" by adding substances such as such as cedar, horseradish, green tea or chemical known as zeolites.

The cleanliness craze began in 1987 with the introduction of Commuting Comfort, a brand of men's dress sock woven with odor-reducing antibacterial thread that claimed to get rid of athletes foot. One of the oddest and most expensive antibacterial products is "Mr. Tongue," a $336 pure-sliver tongue scarper used for removing bacteria from the mouth.

Some products use microbes as key ingredients rather than kill them. In the 1990s, a microbe-made product called “Attakku” (Attack) captured half of Japan's two- billion-dollar laundry detergent market. The key bacterium, which was discovered in a rice field, survives alkalinity that is lethal to most microbes. And what makes it so effective is the fact it penetrates dirt-holding niches in cotton fabrics. [Source: Thomas Canby, National Geographic, August 1993] 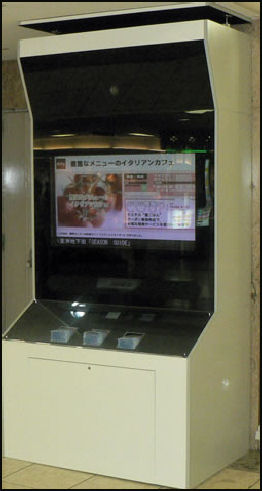 scent-emmitting machine At the men's Clean Koenji shop customers buy a mailbox like compartment for $7.81. Each time they want their underwear washed they place it along with a 78 cent ticket in the compartment. The next day at noon it it is ready. In Japan you can also buy a special washer and dryer and germ-killing detergent just for washing sports and running shoes.

The Japanese government gave five companies money to build a $45,000 automated bath robot which would enable drunk or exhausted salaryman to bath themselves without lifting a finger.

In the late 1990s, Japanese banks introduced ATM machines that dispensed clean money. These machine take in wrinkled and dirty yen banknotes, feed them through rollers, heating them to 392̊F and dispensing the notes clean, crisp and 90 percent bacteria free. "Virgin money," Evelyn Richards wrote in the Washington Post, "plays an especially key rule at weddings, where cash is the favored gift. No respectable Japanese would give anything but untainted bills."

The clean money machines were invented by Hitachi by accident. In the process of inventing a process to iron out crumbled bills with 392̊F heat, they discovered that the high temperature also kills bacteria. Explaining why disinfected cash is popular with young women, a bank spokesmen said, many "say they don't want to touch things handled by middle-aged men."

Many of the buyers of antibacterial products are office ladies and schoolgirls who say they can't stand the thought of using anything handled by sleazy middle-aged men, or “ojisan”. One young woman told Los Angeles Times that middle-aged salarymen "stink of tobacco and liquor and I don't know what else. Some of them are balding, and their heads are shiny and it makes them look greasy...At night, they drink and their faces get red and they breath on you. It's awful."


ojisans Some Japanese girls are compulsive handwashers, wiping their hands with anti-bacterial tissues every time they touch an escalator handrail or an elevator button. Others refuse to let their clothes be washed with their fathers. One female college student told the Los Angeles Times she never touched the straps in subways because "dirty people" put "their fingers in their mouths or wipe their noses with their hand and then they touch something. I wish they would make those subway straps antibacterial."

For clean freaks department stores have installed touchless toilets, which people can operate with touching the controls. There are even toilet lids that automatically open or close when a person is sensed nearby, and hotel rooms that have air cleaners that emit negative ions and are given the first degree by cleaning crews.

In a survey by the Japan Soap and Detergent Association, 80 percent of respondents said they use sterilizing products to clean their houses, with 70 percent saying they favor products which proclaim to have sterilizing powers.

Bookoff is a second-hand book store that goes out of its way to make is books palatable to clean freaks. The covers are cleaned with a special spray and the pages are sanded to make them look perfectly white. Bookoff was started in 1991 and now has over 900 outlets and is regarded as a serious challenge to normal bookstores.

Body odor has traditionally been so rare among Japanese that at one time men could be barred from entering the military if their smell was too strong.

Deodorants are sometimes difficult to find in Asia although they have become more common in recent years, in part through marketing efforts by deodorant makers. Body odor is produced apocrine glands in the armpits and genital area. Men have more and larger apocrine glands than women, and Caucasians and Africans have more and larger glands than Asians. 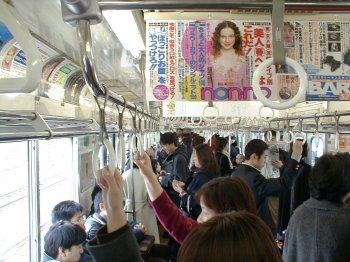 stuck next to ojisans on a subway Some Japanese females complain about the smell of ojisans. When asked to described the smell young women compare it to fertilizer, dead leaves, "squashed aphids" and "a cheap, sleazy hotel." In one survey of young females between the ages of 16 and 25, some 92 percent of the respondents said "something must be done" about "men's perspiration and body odor." [Source: Mark, Magnier, Los Angeles Times, July 16, 1999]

One 23-year-old receptionist told the Los Angeles Times, "My boss, my father, there are so many smelly men around me. I think middle-age men are a lot stinkier than other generations." Describing the problem on crowded trains, a 26-year-old sales clerk said, "It takes one ojisan with a strong stench to smell up the whole car. If I'm standing to close to someone like that, I feel like throwing up."

Researchers at Shiseido released a study that men over 40 produce significantly more of the body-odor-producing chemical called nonenal than other people. The smell of nonenal has been described as "unpleasant and greasy...with a grassy nuance."

Shiseido scientists spent several months extracting fatty acid from undergarments worn by middle-aged men for three days straight until they isolated a fatty acid that combines with air to produce nonenal. Shiseido tested over 200 substances, including lemon, jasmine and peppermint, until they found ones that masked the smell of nonenal.

Shiseido markets a whole line of products’shampoo, powders and air fresheners — that are designed to block the smell of middle-aged men. Gunze, Co., a clothing company, sells "degree” underwear impregnated with chemicals designed to fight odor-causing microbes. Television commercials for the underwear features a woman a crowed subway who is so overcome with smell of ojisans that she starts to scream and pulls off her walkman and puts the ear phones up her nostrils 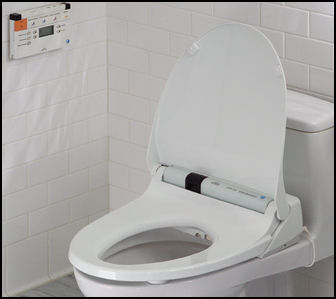 Most homes have Western-style toilets whereas many public rest rooms have mainly Asian-style ones. An Asian toilet is regarded by Asians as more hygienic than a Western one because no part of the body touches it. Asians also find it easier to squat over them than Westerners do.

When Western toilets were first introduced in Japan instruction were provided that showed boys standing in front of the toilet and a girl sitting down. Many Japanese were not sure how to use them and squatted while standing on the seat,

Japan has fewer toilets connected to sewers than any other developed country. More than half of all Japanese homes have toilets with a built-in bidet (water-squirting butt cleaner) and blow dryer. As a water saving measure, some toilets have a small sink that uses the water being stored for the next flush (remember also toilets are often in a separate room from the sink and bathroom so you need something like that to wash your hands).