GEOGRAPHY AND WEATHER OF TIBET


Qinhai plateau Covering an area of over 1.2 million square kilometers ( 470,000 square miles) — an area about twice the size of Texas or twice the size of France — Tibet Autonomous Region is located in the southwest frontier of China. Its area makes up one-eighth of the total national area. It is the second largest Province or Region in China. Only Xinjiang Uygur Autonomous Region in west China is bigger. Most of Tibet is covered by a high, wind swept plateau that receives little rain and is bitterly cold in the winter. It is separated from Nepal, India, Bhutan and Myanmar by the Himalayas, which include Mt. Everest.There are fresh water and salt water lakes.

Administratively, Tibet is divided into one municipality and six prefectures. The municipality is Lhasa, while the six prefectures are Shigatse, Ngari, Shannan, Chamdo, Nagchu and Nyingchi. These are further divided into counties. Tibet borders Myanmar, India, Bhutan, Sikkim and Nepal to the south. With nearly 4,000 kilometers of international bounders it marks much of China's southwest barrier. Within China, Tibet borders: 1) Xinjiang Uygur autonomous Region and Qinghai Province over the Kunlun and the Tanggula Mountains to the north; 2) Sichuan Province across the Jinsha River on the east; and 3) Yunnan Province to the southeast.

Geographically, Tibet can be divided into three major parts, the east, north and south. 1) The eastern part is forest region, occupying approximately one-fourth of the land. Forests, some of them virgin forests, occupy much of this region. 2) The northern part is open grassland, where nomads and yak and sheep dwell here. This part occupies approximately half of Tibet. 3) The southern and central part is an agricultural region, occupying about one-fourth of Tibet's land area. All of Tibet’s largest cities and towns, including Lhasa, Shigatse, Gyantse and Tsetang, are located in this area. It is considered the cultural center of Tibet. [Source: Chloe Xin, Tibetravel.org tibettravel.org ]

Tibet is a thinly populated. There is very little water in Tibet. Snow frequently falls but rarely accumulates. Even so 47 percent of the world’s population gets water from rivers that originate in Tibet. The “tjale” is a 1.35 million square kilometer permafrost-like layer of ice lying under the surface of the Qinghai-Tibet plateau.Sunset occurs very late in Lhasa because it has the same time zone as Beijing. The Tibetan light especially in the morning and night is very impressive.

Rivers and Lakes and High Altitude in Tibet

Tibet is the source of many of the Asia's principal rivers, which include: the Brahmaputra (Yarlung Tsangpo), the Indus (Senge Khabab), the Sutlej (Langchen Khabab), the Karnali (Macha Khabab), Arun (Phongchu), the Salween (Gyalmo Ngulchu), the Mekong (Zachu), the Yangtse (Drichu), the Huangho or Yellow River (Machu) and the Irrawaddy. These rivers flow into ten countries such as China, India, Pakistan, Nepal, Bhutan, Bangladesh, Burma, Thailand, Vietnam, Laos and Cambodia. These rivers and their tributaries are the life-blood of hundreds of millions of people in Asia. More than 15,000 natural lakes are found in Tibet. Major ones include and some of the prominent lakes are Mansarovar (Mapham Yumtso), Namtso, Yamdrok Yumtso and the largest, Kokonor Lake (Tso Ngonpo). [Source: Chloe Xin, Tibetravel.org tibettravel.org]

The Tibetan plateau is the highest and largest plateau in the world, with an average elevation of around 4,570 meters (15,000 feet). Ringed by most of the tallest mountains on the plant, covers an area larger than western Europe or about one-third the size of the continental United States. , at an average altitude of more than two miles. J. Madeleine Nash wrote in Smithsonian magazine, “In geologic terms, the Tibetan Plateau is fairly recent. The uplift that created it began about 55 million years ago, when the Indian subcontinent crashed into Eurasia. The battle between these two giant slabs of earth's crust continues to this day, pushing the Himalayas skyward by nearly a half inch per year. As the plateau was slowly uplifted, it reached into progressively thinner layers of the atmosphere, each one less capable of screening out ultraviolet radiation in summer and trapping infrared heat in winter. [Source: J. Madeleine Nash, Smithsonian magazine, July 2007]

According to the Guinness Book of Records, Tibet also boasts the world's highest airport (14,315-foot-high La Sa Airport in Lhasa); the highest trail in the world (an 8-miles section between Khaleb and Xinji-fu with two parts that exceed 20,000 feet); and the world's highest town (16,730-foot-high Wenzhuan on the Quinghai-Tibet road north of the Tangla). The highest settlement in world — a couple of homes on the T'e-li-mo trail — is located on the Indian-Tibetan border at 19,650-foot-high Basasi. It is only 9,384 lower than Mount Everest.

The Tibetan plateau is bounded to the south by the Himalayas, to the west by the Karakoram range, to the east by the Tangkula Mountains and to the north by the Kunlun and Nan Shan mountains and the Taklamakan Desert. Movement into the area has traditionally been made along mountain corridors. The most difficult obstacles are often at the lower elevations where mighty rivers create gorges and valleys with steep slopes and cliffs. The upper elevations are often marked by plains and plateaus and relatively gentle slopes.

The Tibetan Plateau if the source of several of the world’s great rivers, including the Ganges, Indus, Brahmaputra, Mekong, Yangtze and Yellow Rivers. Before it was pushed upwards by mountain building activity, the Tibetan Plateau was a well watered plain but as it and the Himalayas were pushed up it was deprived of rain and became the dry plateau that its is today. 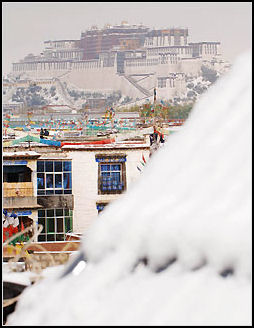 Snow in Lhasa Tibet has a harsh climate. The temperatures frequently drop below minus 30̊F in the winter and rise above 100̊F in the summer, with temperatures sometimes fluctuating 80 ̊F in a single day. For every 500 meters climbed the temperature drops 3̊C. At the summits of high mountains winds can kick up to 90 mph and temperatures can drop many degrees below zero. Generally Tibet is cool or cold and people walk around bundled up in many layers of clothes. It is no surprise that many Tibetans believe that hell is a bitterly cold place not an inferno.

Angie Eagan and Rebecca Weiner wrote in “CultureShock! China”: Temperatures in Lhasa range from -10°C (14°F) to highs at or barely above 20°C (68°F), May to September. Its rainy season is June to August. It is suggested that the best time to trek in the Himalayas is October or November, when the rainy season is finished and before the winter cold sets in. Sandstorms are more common than rainstorms in Tibet. It is an arid place where the midday sun suggests short sleeves, while within eight hours you can be in a harsh cold well below freezing.[Source: “CultureShock! China: A Survival Guide to Customs and Etiquette” by Angie Eagan and Rebecca Weiner, Marshall Cavendish 2011]

Evan Osnos wrote in The New Yorker blog, “The Qinghai-Tibetan Plateau does not go in much for air-conditioning. This is yak country, after all, the high-altitude stretch of western China where Tibetans proudly describe their winters as so punishing and bleak that citizens are celebrated for the ability to drink away the season. Even in summer, the nighttime temperatures usually sink into the low fifties, attracting tourists from China’s broiling south and east.” [Source: Evan Osnos, The New Yorker blog, August 3, 2010]

Tibet is so dry that grain can be stored for 50 years. The extremes of hot and cold, coupled with the thin air and high altitude sunshine, are enough to break granite mountains into sand, and generate fierce winds, stinging hailstorms, and blinding dust storms. Bad weather can come up fast and furious in the Himalayas. I camped outside once and set up tent on what I thought was a calm night. When I climbed out of my tent to relieve myself a huge gust of wind came out of nowhere and collapsed my tent and carried it away. Then, while walking around with one shoe looking for some shelter, the wind stopped as quickly as it began.

To forecast the weather some local people throw salt into the air and then toss it onto a fire. If it crackles it means a storm is far away if it stays silent it means a storm in near. A drought in Tibet in 2009 was the worst in three decades according to Chinese sources. Thousands of hectares was parched and 13,000 head of cattle died.

Monsoon Climate of the Tibetan Plateau 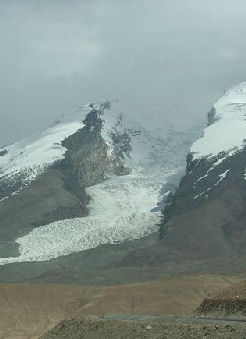 The Tibetan plateau and the Himalayas are believed to been involved in the creation of the monsoons and they are certainly a driving force behind them today. Brook Larmer wrote in National Geographic, “At some point, probably between 15 million and 22 million years ago, the temperature swing from summer to winter became so extreme that it powered the Asian monsoon, a giant oscillating breeze that drives the yearly rain cycle across a vast swath of Asia, the most populous region on earth. In summer, the Tibetan Plateau heats up, and like a huge hot-air balloon, air across the plateau rises, creating a zone of low pressure that sucks in moist air from the Bay of Bengal and the South China and Arabian seas, bringing rain to much of Asia. In winter, cold air descends from the Tibetan Plateau and pushes dry continental air seaward. [Source: Brook Larmer, National Geographic, April 2010]

“The Asian monsoon created the modern-day river basins whose fertile flood plains sustain about half the world's population. Many scientists believe the monsoon also helped cool the planet. Ever so slowly, the rains removed carbon dioxide, the heat-trapping gas most responsible for global warming, from the atmosphere. When the gas is dissolved in rainwater, it turns into an acid, which then reacts with rock to form more stable carbon compounds. In this fashion, says Boston University paleoclimatologist Maureen Raymo, the Asian monsoon set the stage for the succession of ice ages that started about three million years ago.”

“Now it is becoming clear that such natural mechanisms for sequestering atmospheric carbon dioxide are being overwhelmed by the burning of fossil fuels”coal, oil and natural gas. There is more carbon dioxide in the atmosphere today than at any time during at least the past 650,000 years, based on analyses of the chemical composition of air bubbles entrapped in Antarctic ice over that time. By the end of this century, carbon dioxide levels could easily double, and many scientists expect global warming to disrupt regional weather patterns — including the Asian monsoon.”

Heat Wave on the Qinghai-Tibetan Plateau

In August 2010 Osnos stepped off a plane in Xining, a city at an elevation of more than 7,400-feet, on the farthest northern reaches of the plateau, to find it was “hotter than all blinding hell.” [Source: Evan Osnos, The New Yorker blog, August 3, 2010]

“It’s all anyone can talk about,” the driver Su Yanfei shouted above the wind, as we sped down the highway in his Volkswagen Santana, all windows wide down, an experience akin to sitting in the center of a quartet of hair dryers. “It’s never been this hot is what everyone says.” The local paper was packed with stories about the temperature hitting thirty-five degrees Celsius (ninety-six degrees Fahrenheit) in the city and as high as a hundred and thirteen degrees in other parts of northern China. People in Xining roamed the streets at night, glassy-eyed, escaping their sweltering homes. Visitors from Lanzhou, the next big city to the east, told me that television news was calling up grainy footage from the nineteen-thirties to illustrate that the last time it was this hot in Lanzhou, humans had yet to hear of anyone named Chairman Mao.

Day by day, as I moved around the region, I kept a not-so-silent vigil for the first sign of air-conditioning...I never found air-conditioning in Qinghai — and thank god for that. There may be no clearer sign of the End Times than the first moment that a robed Tibetan Buddhist monk catches a summer cough from excess A/C.

An earthquake in Tibet on August 15, 1950 measured 8.6 on the Richter scale. It was the 9th most powerful earthquake ever measured.