family in 1938Tibetans have been described as rough, proud, earthy, honest, solemn, and reserved. Tibet is an extremely harsh land where many people are consumed by a ruthless quest for survival. Even so Tibetans smile a lot; can be very religious and pious; and are generally very easy going. In his book “An Account of Tibet”, the 18th century Jesuit missionary Ippolito Desideri of Pistoia, described Tibetans as people with “good memories who are born wise, kind, polite, active, diligent and skillful.”

On the Tibetan people, Eric Valli, a photographer and filmmaker who has spent a lot of time in the Tibetan region of Nepal, said, "Faith, religion, belief, superstition...has enabled them not only to live in this very harsh place but to remain human...You cannot wear a mask there for long. You cannot fake it. You pretend less and lie less. If you're not open to your neighbor and able to count on him, you cannot survive. This makes relations much simpler and deeper. What I learned from the Dolpo people is courage, tolerance, dignity and perseverance."

One Tibetan saying goes: "When two paths appear before you choose the more difficult one. That's the one that will draw forth your best aspects." Many Tibetans say if they could do anything they wanted, they would choose to spend 10 years in a cave meditating. Tibetans have traditionally not been very ambitious. In many ways Buddhism teaches one to accept their lot in life and look for happiness in future lives. The 2008 riots showed that some Tibetans have a violent side.

Tibet has traditionally been ruled by an aristocratic class with strong ties to the Tibetan Buddhist hierarchy. The aristocratic class still exerts a lot of influence. "A few people belonging to high-status families control everything," said Yangdon Tsekyi, 25, who works in a Dharmsala coffee shop, a comment echoed by many Sangay voters. "If you have the right family name, you can be successful here.” [Source:Tim Sullivan, Associated Press, March 15, 2012]

Chinese poet and blogger Tang Danhong wrote:“From the very beginning of my experience with Tibet, I fell in love with the Tibetan people, their culture, and their faith. Their unique hospitality, charm, good humor, and confident attitude moved me quite deeply. They convey a priceless character through their smiles and their eyes, and the way they serve their tea and toast their wine, the way they spin prayer wheels. It’s a special kind of character that makes one feel warm and think deeply. This special character of theirs is intimately related to their land and Mother Nature, to their language and wisdom, and to their faith and philosophy about the world. I cherish most their understanding of, and universal compassion for, the tough realities experienced by all forms of life. [Source: “Fire Between the Dark and the Cold” by Tang Danhong, Hong Kong’s Open Magazine, January 2013, China Digital Times, January 9, 2013. Tang Danhong is a poet and filmmaker from Chengdu, Sichuan. She currently lives in Israel. She blogs at Moments of Samsara]

The religious scholar A.C. Graham wrote: “Buddhism is a “Nay-saying” religion, rejecting all life as suffering and promising release from it; yet when one is actually in a Buddhist country it is hard to resist the impression that one is among the liveliest, the most invincibly cheerful, the most “yea-saying” people on earth.”

Poor people in Buddhist countries often have a big smiles on their faces, something that many people believe is attributed to the fact they spend so much time praying and engaging religious activities. Religion is a daily, if not hourly, practice for many Buddhists. Tibetans, for example, seem to spend hours each day praying or spinning prayer wheels.

Buddhism encourages its practitioners to keep their emotions and passions in check and stresses karma over determination, which often means people are more willing to accept their lot in life and look for happiness in future lives. This outlook and is sometimes viewed in the West as a lack of ambition or unwilling to work hard to get ahead.

Patience is a great virtue. Many Buddhists see patience in terms of moral patience to endure suffering and hostile acts of others and intellectual patience to accept ideas — especially ones that seem so unfathomable and unpleasant like the non-existence of all things — before understanding them.

Buddhism beliefs in sanctity of life and non-violence have their origins in Hinduism and Jainism. The view that non-violence is a dominate belief is a bit of a myth. Robert Thurman of Columbia University told the New York Times, "There is a Buddhist theory of war, of self-defense, and there is also a kind of theory of surgical violence. The optimal ideal thing is non-violence. But sometimes you have to do a little violence to prevent a larger violence. The Buddhist have thought about this are they are not simplistic."

Many Chinese consider Tibetans to be uncivilized, superstitious, hostile, lazy, ignorant, dirty, unpredictable and a bit savage, and regard the Tibetan religion as examples of "false consciousness" and "incorrect thinking." Many Tibetans view the Chinese as greedy, moneygrubbing, manipulative, arrogant, unwanted house guests. One nationalist Tibetan told the Los Angeles Times, "We believe in Buddhism, they're atheists. They think only of making money." Tibetans are particularly suspicious of Sichuanese, whose women are regarded as loose and who men are thought of as tricky and sly.

"Even Tibetans like to hire the Chinese because they have more modern methods and they work harder," one Tibetan man in Lhasa told the Washington Post. "Tibetans would rather give their money to a beggar or to a monastery in hopes earning merit for next life than put in the bank or invest it,” he said.

To illustrate the difference between traditional nomadic Tibetan thinking and Chinese thinking, a western analyst told the Washington Post, "If you got eight yaks what's the next best thing. The nomads would say, 'Nine yaks.' The Chinese would say, "No, sell a yak, then you get money. With money, you can build a house."

Tibetan culture and the Tibetan character have gone underground under Chinese occupation. Among the younger generation in urban areas they are being displaced by Chinese and Western culture to varying degrees. These days many young Tibetans wear jeans and speak Chinese and are attracted by opportunities to make money and enjoy material pleasures.

The Chinese occupation has created a situation where there is a lot of stress and aggression below the surface. In some places, especially where Chinese business customs have taken hold, people will cheat you if they get the chance and give you hard time for no good reason.

Tibetans can often be distinguished from Chinese by their full faces and ruddy, sun-burned red cheeks. Tibetan men are tough and surprisingly large.

Elliot Sperling of Indiana University's Tibetan Studies Program told PRI"There is a tendency among many people who are interested in Tibet to see Tibet as frozen in this sort of idealistic Buddhist, or even folk, kind of culture. But all culture is dynamic." [Source: Matthew Bell, PRI, February 11, 2014]

On the five stereotypes that shape views of Tibet, Chan Koonchung, a Chinese writer heo has written about Tibet, wrote: 1) The romantic stereotype –Tibet as Shangri La, an exotic, timeless touristy region of simple, peaceful folks. 2) The spiritual stereotype – Tibet as the spiritual Buddhist holy land. Tibetan Buddhist gurus have many followers in other parts of China. 3) The patronising stereotype – Tibet is pre-modern, China is modern. The Communist Party liberated Tibet from medieval backwardness. Tibet depends on aid from the Chinese state. China’s affirmative action policies are beneficial to the Tibetans, maybe too generously so. 4) The statist stereotype – Tibet has always been a part of China from time immemorial. Foreign imperialists are always there trying to encourage Tibetan separatists to divide the Chinese motherland.

5) The victim stereotype – Tibetan culture is under threat, all because of the Chinese rule: non-Tibetan migrants, ‘Han-ification’, assimilation policies, bureaucratic nepotism and state violence. But traditional culture is also changing inside Tibet because many Tibetans want modernisation and welcome economic growth. Many Tibetan families urge their children to learn Chinese and young Tibetans love hybridised popular culture. (Though, of course, I am not unsympathetic to this victim stereotyping because Tibetans are now indeed a minority culture under stress.) 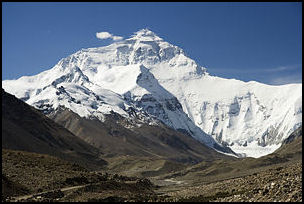 Tibetan side of Mt. Everest Westerners are fascinated with Tibet and Tibetan culture even though in many ways they are the antithesis of the West and Western culture. The Shangri-La myth of Tibet as a kind of spiritual paradise — created by Westerners — is far removed from the reality of Tibet as an extremely harsh land.

Among those taken in by the Shangri-La myth was Adolph Hitler who speculated that the Aryans may have originated from Tibet. A variety of cults and New Age sects, who have incorporated Tibetan Buddhist beliefs into their own doctrines.

Rigzel Losel is the director of the Research Institute for Contemporary Tibet at the China Tibetology Research Center, “Like any scholar, I value academic freedom. I am concerned that some Western scholars of Tibet do not practice genuine academic research. Instead, they come with preconceptions.... A case in point is an American scholar I recently encountered at a forum in Tibet. When asked about China’s plan to invest 300 billion yuan in Tibet for the next five years, he immediately dismissed it as beneficial to the local Chinese population and unhelpful to the Tibetans. How could a serious scholar make such a foregone conclusion before he understands the details of the investment, and before it even starts?

Some Tibetans, especially urban ones, have become more Westernized in recent decades. According to the China Daily, a mouthpiece of the Chinese government, in the mid 2000s: Religion is still one of the most important parts of Tibetans' lives, but change is creeping into Lhasa. The younger generation is now taking on more secular lifestyles. A hip-hop clothing store is not what one expects to find on Barkhor street. But it's one of 20-year-old Zong Ji's favorite places. Trying something different is no longer a risk, but a pleasure. A Tibetan Student said,"Young students like me prefer to try something modern and fashionable." [Source: chinaculture.org, Chinadaily.com.cn, Ministry of Culture, P.R.China, October 10, 2005]

“Store Owner Tu Dan said, "Tibetan people are catching up to western styles of dress, which used to be totally foreign to us. This is nothing new here." The changes keep coming, and the face of Lhasa is changing like the lives of its people. But Nyima is already bracing for more changes in his hometown, while still holding onto his cultural roots, and hope for even better business.

With the ever increasing flow of information and people into Tibet, the ancient land of mystery is on its way to modernization. And the celebration of 40th founding anniversary of the Tibet Autonomous Region is believed to be a boost in the drive of its people to become richer and hopefully happier.