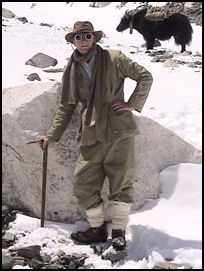 Mountain climber in the 1930s Many of the last unclimbed peaks over 7,000 meters and 20,000 feet are located in Tibet and China.By some counts over 80 percent of the major mountains in China have not been climbed.

In 1991, 17 Japanese and Chinese climbers died in an avalanche while trying to climb 22,113-foot-high Mount Kawagebo on the Yunnan-Sichuan border. In November 2006, two American climbers died in an attempt to climbed Genie Mountain, a 6000-meter-high peak in Sichuan near the Tibetan border. It took several months to find the body of one of the climbers, a woman.

In September 2008, three Japanese mountain climbers were killed in an avalanche at about 6,000 meters while climbing the 7,554-meter-high main peak of Mt. Kula Kangri in Tibet.

In June 2007, Alain “Spiderman” Robert climbed the tallest building in Shanghai---the Jin Mao Tower--- without permission. Afterwards he was arrested, spent five days in jail and was banned from entering China. A few months later he was showed up in China again after being invited to climb Mt. Tianmen in Hunan Province by officials at the national park, where the mountain is located, to attract tourists to the area.

Mt. Everest climbing gear include ice axes, crampons (spiked things that grip the snow and attach to the boots), plastic boots with inner liners, gaiters (to keep snow from falling in the shoes), glasses with ultraviolet lens (to prevent snow blindness), light and strong 8- to 12-mm rope, ice screws (hammered in with an ice ax), harnesses, carabineers (used to attach the ropes to the ice screws and harness), and oxygen canisters.

Climbers usually wear polypropylene layers next to the skin, which helps move sweat away from the bodies, medium layers of insulation, and outer layers of Gortex for protection against wind, snow and moisture. Unlike rock climbers, Mt. Everest mountaineer don't wear helmets because they are more concerned with keeping their heads warm than protecting them from falling rocks.

Equipment is getting lighter, warmer and stronger all of the time. These days climbers also have walkie talkies and telephones to call for help and video cameras. It is a chore getting supplies up the mountain. Climbers traverse between different camps and Camp 1 as many as 10 times to ferry supplies.


Route up the Tibetan side of Everest

The Tibetan Route on Mt. Everest avoids the dangerous traversal of the Khumbu Icefall on the Nepalese side but involves more climbing skill and more time above 25,000 feet. The base camp is located at 17,000 feet. From there the ascent is relatively easy and gentle to Camp I at 18,300 feet and Camp II at 20,000 feet. To reach Camp III at 21,300 feet and Camp IV at 23,100 feet requires traversing glaciers and snowfields.

One of the most difficult parts of the climb is up the somewhat technically demanding rock face to Camp V at 25,600 feet. From here mountaineers follow a ridge crest all the way to the summit. Camp VI is located at 27,200 feet. The last section entails getting past the First Step and the Second Step, a 90-foot-high rock wall at 28,300 feet which now can be traversed using a ladder placed there by a Chinese team.

The Chinese made the first successful conquest of the summit of Everest from the north in 1960 using this route. Everest pioneers Mallory and Messner also used it.

A Chinese team made the first ascent of Mt. Everest from the north (from Tibet) and was the second team to reach the summit after Hillary and Tenzing. Led by Shih Chan-Chun, the team reached the summit on May 25, 1960. No teams from other countries tried from this side until 1980 because Tibet was closed from 1950 to 1980.

Three Chinese climbers---Wang Fuzhou, Gong Bu and Qu Yinhua---reached the summit. Qu was recruited from a logging camp in Sichuan and lost a finger and toes to frostbite. He told a Beijing magazine,”We were aware that the climb was of national importance. We knew other Chinese teams had failed, and we knew that it had become an issue of China’s “face.”

The expedition was originally supposed to be a joint Soviet-Chinese expedition but troubles between the two Communist giants prevented that from taking place. The Chinese team underwent training in the Pamirs in the Soviet Union and received $70,000 worth of foreign equipment. Before the climb the team were told by Chinese Premier Zhou El Lai: “Get to the top, or die trying.”

There biggest obstacle for the Chinese Everest team was a sheer face of ice-covered rock called the Second Step. Qu said, “We made three attempts at the 30-meter cliff. We went this way and that way, but it was no use. We were exhausted and night was falling...The English had said that not even a bird could fly across the Second Step. But then we noticed a crevice of 20-30 centimeters in width.”

Unable to get a good grip, Qu took off his four-kilogram boots and socks and climbed the crevice in -40 degrees C barefoot. Qu said, “I could just hear Premier Zhou words in my head. I knew that greater things than one man’s feet were at stake---it was a question of national honor.” It took more than five hours for Qu to get over the Second Step and help Wang and Gong. Just after midnight they began the final ascent,, reaching the summit at 4:25am.

At the summit the scribbled the time and date on a piece of paper and placed a statue of Mao and a Chinese flag in a canister which they buried at the summit and picked up a rock which the presented to Mao (the rock now sits in the National History Museum in Tiananmen Square). The team spent less than a minute at the summit. Because it was dark they took no photographs.

Because not photos were taken there have been allegations that the feat was faked and was not recognized by the international climbing community until 1975, when another Chinese team made it the summit using the same route, bringing along a 25-meter ladder to get over the Second Step. . Image Sources: Louis Perrochon; Roadtrip.com; Poco Pico; 21st century Paladin com; Julie Chao; Alan Arnette