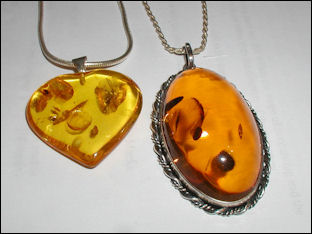 Amber pendants Amber is a brittle, honey-colored material created from tree resin that flowed from a wound in a tree, protecting the tree like a bandage, and then hardened and survived after the tree decomposed. Over millions of years it was transformed into rock by chemical changes and pressure within the earth. Amber burns; is so light that it floats; and gives off of a silky golden sheen when polished. [Source: John F. Ross, Smithsonian magazine]

Amber is technically not a stone. It is a partially cross-linked polymer. Artist, jewelers and craftsmen like it because it can be polished to a high gloss, cut into thin sheets and carved with fine designs. It is slightly less dense than water; a little harder than a fingernail; glows warmly in lamplight; and breaks as easily as glass. The best amber is used make jewelry and art objects. The remainder is used in varnishes, paint thinners, polishes, fuel additives and medicine ingredients. Sometimes plastic can be used as a substitute for amber. 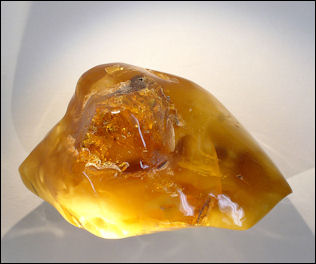 amber Amber comes from regions that in prehistoric times were covered with forests of resin-producing great broadleaf conifers and hardwoods. It is found al over the world in sediments between 300 million years old and 1.5 million years old. Some pieces of amber are quite large. Lumps weighing 15 and 18 pounds have been discovered in European mines. According to the Guinness Book of Records, the largest piece of amber ever found weighs 33 pounds and 10 ounces. It is kept at the Natural History Museum in London.

Much of the world’s amber comes from the Baltic Sea area of northern Europe. Some geologists regard Baltic amber as the purist amber because it is high in succinic acid. Amber from the Dominican Republic holds the amber with the most fossilized lifeforms (it has one insect inclusions per 100 pieces, compared to one in a 1,000 pieces for Baltic amber). Amber is also found in Israel, Jordan, Lebanon. Austria, Manitoba Canada, the Czech Republic, Mexico, Ecuador and Columbia. The oldest amber comes from the Appalachian region of the United States and Northumberland in England.


blue amber from the Dominican Republic The word amber can be used to describe the material and the golden-brown color often associated with it. But golden brown is not the only color amber comes in. Over 250 amber colors and hues been described, including some blues and greens along with the more common reds, yellows, browns, golds, oranges, and whites. Some specimens are almost completely transparent. Others are opaque. The color is determined by things like the tree source, epoch, temperatures and pressures the amber was exposed to.

Most kinds of amber---including much of the amber from the Baltic---is dull brown or tan in color, sort of like milky tea. Often it is heated to make it translucent or dyed any number of shades that vary from yellow to dark red. Russians are regarded as the masters of amber dying. Many of their methods are secret and were developed while working on the Amber Room and other projects. When asked about their methods, the Russians say little other than that they use organic chemicals.


Spider in amber Amber has the ability to preserve lifeforms which otherwise would break down and decompose and be transformed into coal or some other hydrocarbon. The oldest fossil mushrooms, moths, stringless bees, caterpillars, termites, pollen grains are all preserved in amber. Flower from a primitive oak tree, dated to 90 million years old, during the age of the dinosaurs, has been preserved in amber.

Among the other life forms that have been found encased in amber are scorpions, butterflies long-legged flies, spiders, frogs and lizards. The detail and degree of preservation of some of the specimens is extraordinary. Butterflies have been found with color variations in their wings still visible. A spider was trapped in amber with prey still in its mouth.

"David Quammen wrote in the New York Times, "Amber fossils are usually three dimensional, not squashed flat by sedimentary pressure. They often preserve the original color patterns, internal organs and even cellular structures of an organism. And because the creatures have fallen into the goo while alive, their mummified bodies may retain postures of life, or at least a terminal struggle...Finally, the fidelity of the preservation allows many species to be precisely identified to the level of species seldom possible with insects coarsely imprinted in stone."


prehistoric Magdalenenberg amber Amber was one of the first minerals to be prized by man and worn by humans for decorative purposes. Prehistoric people likely found pieces of amber washed up on the shores of the Baltic and the Mediterranean. There is evidence of trade of amber in Europe as far back as 28,000 B.C. Ten-thousand year-old amber jewelry have been found with human artifacts in England.

Ancient people traded amber for copper and iron; were captivated by its ability to generate static electricity and believed it possessed magic powers because of its ability to give off warmth and attract objects such as hair and straw with a small charge of negative static electricity. Prehistoric shaman carved it into small, unusual figures with expressionless faces. Over the centuries numerous peoples used it treat illnesses. In ancient Rome, Pliny the Elder described it use as a medicine for ailments of the neck and head.

Baltic amber has been found at ancient sites in Mycenae, Troy and Egypt. Homer referred to amber in the Odyssey; the Etruscans prized it more than gold; the Egyptians may have used it mummification as a drying agent; and the Maya burned it as incense in healing rituals. The Greeks called amber elektron (the root of the word "electricity"), or "substance of the sun," perhaps because of its golden color and the fact that it absorbed sunlight and gave off heat. According to Greek mythology, it was created from tears shed by Apollo's daughters over the death of their dead brother Phaëton.

In ancient Rome, a single piece of amber was worth more than a slave. Nero reportedly made contact with Germanic people in northern Europe because he was upset over the high middleman charges for amber and wanted to get closer to the source of the material. His emissaries returned with 13,000 pounds of amber, including one piece that weighed 10 pounds.

Starting in the 16th century, workshops in Europe began fashioning amber into pipes, chess pieces and inland boxes. It was popular with Italian jewelry designers and cameo artists. The composer Frédéric Chopin used to rub his hands with amber before piano performances. Many ethnic groups in north and west Africa also treasure amber.


insect trapped in resin Baltic people---Poles, Russians, Germans, Danes, Swedes, Lithuanians, Latvians and Estonians---have traditionally greatly prized amber. They live near the source of what is regarded as the most beautiful amber. Amber often shows up on Baltic beaches entangled in seaweed after it has released from amber-rich layers of earth by storms or eroded by wave action. Many pieces often appear after violent storms.

Amber in the Baltic is believed to have been created between 27 million and 48 million years ago when a region known as Fennoscandia was covered in forests with broadleaf conifers and hardwoods like those found in southern China, Laos and Vietnam. Pieces of amber were carried down rivers towards the Sambia Peninsula, where they were covered by river sediments only to emerge later when the sediments were uncovered. About 13 percent of the amber mined in the Baltic is suitable for jewelry.

About 700 tons of amber is mined in Russia every year. Much of it comes from Palmnicken, a seaside town not far from Kaliningrad, where amber is extracted from amber-rich layers 120 feet below the surface in several strip mines. As much as 7.7 pounds of amber can be found in each cubic yard of dark earth.

A high dam of sand and soil separates the mines from the sea. Huge cranes with shovel dig up the earth and drop it into piles that are blasted by water cannons and reduced to a slurry which is transported by pipes to processing plants, where screens and suspension pools are used to separate the amber from stones and other materials.

The mines are guarded by heavily armed soldiers armed with AK-47s. Scavengers called “crows" scrounge through abandoned pits searching for amber that the miners missed. It is not uncommon for children to find several thousand dollars worth of amber there during their summer vacation. 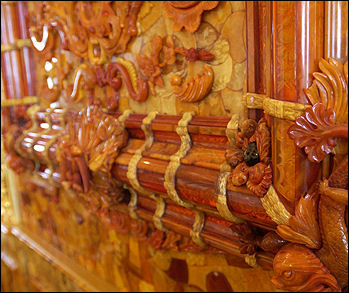 recreated Amber Room The Amber Room---an ornate, 120-square-meter (1,300-square-foot) room made from 100,000 pieces of perfectly cut and fitted amber mosaic panels---is regarded as the most spectacular work of amber art ever made and the largest work of art ever made from material labeled as a gem. [Sources: Elizabeth Kolbert, The New Yorker, April 14, 2003; John F. Ross, Smithsonian]