recreated Amber Room The Amber Room — -an ornate, 120-square-meter (1,300-square-foot) room made from 100,000 pieces of perfectly cut and fitted amber mosaic panels — -is regarded as the most spectacular work of amber art ever made and the largest work of art ever made from material labeled as a gem. [Sources: Elizabeth Kolbert, The New Yorker, April 14, 2003; John F. Ross, Smithsonian]

History of the Amber Room 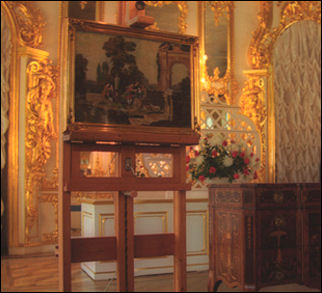 Amber room fragments The Amber Room was commissioned by King Friedrich I in 1701 for his sumptuous City Palace in Berlin and required eight years to complete under the guidance of the master craftsman Gottfried Wolfram, French jeweler Tusso and architect Andraes Schlüter. In 1711, the panels were placed in a room in at the palace where Friedrich played ticktacktoe and piquet games with his friends. He died in 1713.

Peter was not so fond of extravagance himself. The amber panels were considered be too opulent and flashy for his taste. After he received the panels he had them stored away in their boxes. The panels were not taken out until 1740 when Peter's daughter Empress Elizabeth decided to build a special room for the amber, which was completed in 1755. The room was designed so that the amber blazed with golden light in the setting sun.


Tony Blair in recreated Amber Room The Amber Room walls were made for 16-foot-high walls but the walls at Tsarkoye Selo were 30 feet high. To compensate the original rooms were framed in gilded boiserie tile, and embellished with wood parquet floors, a ceiling painting by Fontebasso, 24 Venetian mirrors, each topped with gilded statue of a bare-breasted nymph, objects from Peter's collection and trompe l'oeil paintings intended to look like amber mosaics. At the center of each panel was placed a Florentine mosaic dedicated to one of the five senses. The room was designed by the Italian architect Bartolommeo Francesco Rasterelli.

Catherine the Great reportedly like to play cards in the Amber Room. A Frenchman who visited the room wrote: “This isn’t a cramped boudoir, or a small chamber, but a room of considerable proportions...The eye, unaccustomed to seeing amber in such profusion, is mesmerized and blinded by the wealth and warmth of the tones.”

Looting of the Amber Room by the Nazis

On September 17, 1941, the German army captured the town of Pushkin, south of Leningrad, and immediately occupied Summer Palace of Catherine the Great. The women of Pushkin were able to remove nearly all the art work in the summer palace but were not able remove the Amber Room.


Silvio Berlusconi in recreated Amber Room It is not known exactly why the Amber Room was not removed. It was probably because the women who saved the palace’s art didn’t have enough time to take down the panels, box them up and transport them. The Russians were unprepared for the swiftness of the Nazi invasion.

Rolls of wallpaper were placed over the amber but that didn't fool the Nazis. Within hours after the Nazis arrived, the Amber Room was dismantled and carried off by the Germans to Kaliningrad (then known as Königsberg). After the war the amber room panels disappeared without a trace. At that time the panels weighed six tons and were valued at more than $150 million. It is said that Hitler planned to put the panels in the colossal Fuhrmuseum he was planning to build in Linz.

Of the tens of thousands or works of art that were looted in World War II, many regard the lost of the Amber Room as the most tragic and the most intensively sought. All that remains of the Amber Room is one color photograph, several black-and-white photographs, some pieces of amber panel and a few drawings and notes.

Mystery of the Amber Room 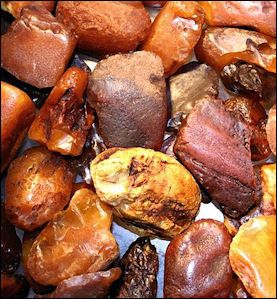 amber stones What happened to the panels of the Amber Room is one of the greatest unsolved mysteries of the 20th century. Some people think they were deliberately burned or were carried by a ship or submarine that was sunk. Others, like former Russian leader Boris Yeltsin, believe they were reassembled in the home of a German or American collector. Most believe they were destroyed in Allied bombing raids in Kaliningrad.

After the panels of the Amber room were brought to Kaliningrad they were were kept in the main castle there under Nazi museum director Alfred Rohde. The room was exhibited for 20 months in the castle and was disassembled in late 1943 when the tide began to turn against the Nazis and the there were concerns about the panels.

The Amber Room panels were reportedly in the castle when it and much of downtown Kaliningrad endured two nights of heavy bombing by the Royal Air Force in August 1944. One British bomber raid dropped 465 tons of bombs. On another night the planes dropped 460 tons. After the Soviets took over Kaliningrad they bulldozed the rubble and laid new streets and erected new buildings. No fragments of amber were found in the rubble, which has led some people to believe the panels were moved before the bombing.

Many think that of the panels were stored then the Amber Room is probably still in Kaliningrad, perhaps deep underground somewhere in a vault formally under the old castle. When the Soviets took over the city the bulldozed ruble from the castle covered several football fields. Large sections of the new city were built on the rubble.

Looking for the Amber Room


location of Yantarny amber mine Before it was disbanded the Stasi (the East German secret police) investigated 1,500 possible places the Amber Room could have been stashed away. The even spent $1 million excavating a clay pit south of Leipzig, where it was rumored to have been hidden. An Amber Room club, devoted to discovering its location, was founded by a Russian baron living in exile in Liechtenstein. Among its members was the Belgian mystery writer Georges Simenon.

The castle curator Rohde was interrogated several times by the Soviet officials after the Soviet captured Kaliningrad. He was evasive in his answerss and at one point was discovered burning a pile of papers. By the end of 1945 he and his wife were dead.

Gaukeiter Erich Koch, an unscrupulous Kaliningrad-born Prussian and friend of Rohde, was in charge of the Amber Room in the weeks before the Red Army entered the city. Koch looted many works of art and was associated with with a number of war atrocities committed during World War II . He was sentenced to life in prison after the war (he was reportedly spared a death sentence because of his knowledge about the Amber Room). Koch said the amber panels were loaded in ships that sunk it the Baltic. Searches for these ships turned up nothing.


Yantarny amber mine Some say Koch ordered the panels placed in an ice house used to store barrels of cold beer for a local brewhouse he used to drink at. Nobody knows where the ice house is. Koch was imprisoned after the war. When he returned to Kaliningrad in 1967 he said the panels were hidden underground near a Catholic Church. The only problem is that there is no Catholic Church in Kaliningrad and brewery where he used to drink is now a mineral water plant. Koch died n 1986.

In May, 1997, German police were informed that a lawyer in Bremen was trying to sell a small mosaic from the Amber room for $2.5 million. The mosaic — -showing men smelling a rose — -was identified as authentic. It is the first part of the Amber Room to be recovered. A few weeks later a chest of drawers with a mosaic made with gold, marble and precious stones believed to be part of the Amber Room was found in Germany. It was owned by a woman who purchased it from Stasi art traders in the 1970s. The German president has promised that all the items from the Amber Room will be returned.

In the meantime the Amber Room was recreated at a total cost of $11.3 million, with with a $3.5 million grant from Ruhrgas, the giant German gas company. The re-creation was unveiled to world leaders during St. Petersburg 300th anniversary celebrations in May 2003. Those who have seen it have called an “eighth wonder,” “a jewel,” and “astonishing.”

The Amber Room was re-creation took a decade to complete. Craftsman said the project was more difficult than they thought. Funding was also a problem. There greatest obstacle was dealing with shortages of amber and increases in its price. About six tons of amber was used to create 2,640 pounds of amber panels in the finished room. One of the original Florentine mosaics, which had been taken by a German soldiers, was found and turned over to the project.

A plan to rebuild the Amber Room was approved in 1979 but took so long to get going because the art of carving and making artwork from amber had largely been lost. It more than ten years, mainly through trial and error, to relearn the most basic techniques.

The director the project was a stone carver named Boris Igdalov. He was in his late 40s while heading the project and oversaw a staff of 75: mostly amber carvers but also carpenters, architects, accountants and lawyers. As was the case with the original, most of the amber was extracted from loam in Yantar’nyi Poselok, or Amber Village, near Kaliningrad.

Describing craftsmen at work Elizabeth Kolbert wrote in The New Yorker, “In one part of the workshop I found two men working on a huge wooden frame that was covered with with pieces of amber fitted together jigsaw-puzzle fashion. In another part, I came across a dozen carvers hunched over microscopes. each craver had a set of tools of the sort found in dentist offices — -thin pliers, chisels with very fine points, and tiny drills.”

“A man in the center of the room was carving the two-inch-high torso of a Roman soldier, and had reached the point of incising the tunic. He let me look through the microscope — -much of the carving is so delicate that it can be done only under magnification — -and I could see that the tiny grooves were filled with bits of dust...Every thirty seconds or so one of the carvers would lift up the piece he was working on and blow the dust off with a practiced “whoosh “. Then he would put it back under the microscope, resting it on a little velvet cushion.”