Arafat, Nasser and Abu Jihad
at Arab conference Palestinians began becoming more politically active in the wake of the Arab nationalist movement in the 1950s. As the effort to strengthen Israel grew so too did anti-Israeli sentiments among Arabs and Palestinians. The Palestinian refugee camps in particular became breeding grounds for political activism and resistance against the Israelis.

One Palestinian refugee told the Los Angeles Times he vowed to fight the Israelis after he witnessed Israeli soldiers beating up some Palestinian old men after some children poked holes in sandbags set up at an Israeli position. “This gave me a green light to try to be free of the occupation. I will never forget the fear, my father, my mother and I felt...I had the right to refuse my occupier.” He began his career as a resister by writing anti-occupation slogans on walls. He then made contact with the PLO and began running weapons. He was arrested and placed in an Israeli prison and his family’s house was dynamited after he threw a grenade into a truck filled with Israeli soldiers.

Many Palestinians have immediate family members or relatives who have participated in one way or another in the resistance against Israelis. Some have joined terrorist organizations. Others participated in the intifadeh. Some have been killed by Israeli soldiers. Many have been jailed. "Graduate school" is slang for Israeli prisons. Others have been deported or prevented from entering the country.

Book: War Without End: Israelis, Palestinians and the Struggle for a Promised Land by Anton La Guardia (Thomas Dunne


Six Day War
The Palestinian Liberation Organization (PLO) was established in 1964 by Egyptian President Gamal Abdel Nasser as a front for Egyptian activities in Israel. After the Six-Day War, Palestinians began facing the reality that the Arab nations had done and could little to help them so they began forming their own political groups and increasingly began using the PLO as rallying point for their efforts.

After the Six-Day War, a number of militant Palestinian groups became active. One of these was Fatah (who name is a reverse acronym in Arabic for “Palestine Liberation Movement”). It was founded in 1958 in Kuwait by three young Palestinian expatriates, including a building contractor named Yasser Arafat.

The purpose of the PLO was not to defeat the Israelis or even weaken them but rather to draw attention to the Palestinian cause through publicity---a kind of psychological victory. This idea become more relevant after the Arab armies were defeated in the Six-Day War in 1967 when conventual military tactics didn’t work and other methods were needed. Terrorism (attacking civilian targets) was chosen in part because Israeli military installations were so well guarded and civilian target were much easier to hit.

In the years following the Six-Day War, Fatah and other activist groups---including ones amde up of social democrats and Marxist revolutionaries---took over the PLO. Thousands joined the PLO after an Israeli attack on a PLO base in Jordan on March 1968. Arafat became its leader in 1969. He is credited with transforming the PLO from a forum for the established Arab powers to a voice for the Palestinians, many of them in refugee camps scattered throughout the Middle East.

The PLO made a name for itself as a terrorist organization but has not been directly linked with terrorist violence for over two decaes. In 1988, Yasser Arafat declared a Palestinian state, renounced terrorism and recognized Israel. No Israeli has been killed by them since 1992.

Factions of the Palestinian Liberation Organization 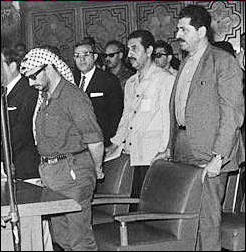 Hassan, Arafat at PNC The PLO was made up of a number of factions. Most of the these had their roots in Arab nationalist movements of the 1950s and early 1960s. Fatah, headed by Arafat, was the largest PLO faction. It had traditionally been regarded as more moderate than other groups. It was not Islamic or Marxist-Leninist. Its primary goal was establishing a Palestinian state.

The Front for the Liberation of Palestine (PFLP), headed by Abu Ali Mustafa, was the second largest faction of the PLO. Founded by Arab intellectuals and a handful of Palestines, it was a Marxist-Leninist revolutionary group and supporter of terrorism. Mustafa was killed by an Israeli missile in August 2001.

The Black September group, an arm of the PLO fled to Lebanon in 1970, and there launched their terrorist campaign, include the Munich attack. It is widely believed that Black September operated under Arafat’s control.

Other PLO groups included the Democratic Front for the Liberation of Palestine, Vengeance Youth and the Heroes of the Return. Non-PLO Palestinian groups were not tolerated by the PLO. One PLO official went as far as threatening to kill any Palestinian who dared to represent the Palestinians without PLO approval. 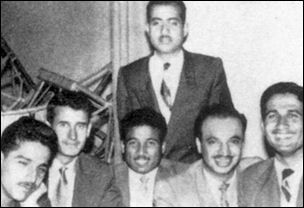 Arafat as an engineering student By the 1990s the PLO had become a semi-government providing social benefits and limited government services for Palestinian refugees and Palestinians in territories occupied by Israelis. In the early 1990s the PLO had a $200 million annual budget and $5 billion in reserves and a quasi civil service that had as many as 28,000 employees around the world.

The PLO received about $500 million a year in donations, mainly from oil-rich Arab nations and rich sympathizers. It staged a number of terrorist attacks to bring international attention the plight of the Palestinian people. The international response to the PLO activities was mainly disgust and revulsion.

For decades Israel refused to negotiate with the PLO until it recognized Israel’s right to exist. Israel often pushed for friendly relations with non-PLO Palestinians and even embraced Hamas for a while. 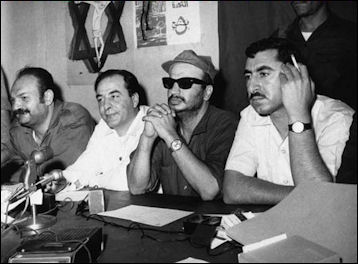 Arafat in Jordan The PLO ( Palestinian Liberation Organization) used Jordan as a base of operation for attacks against Israel between 1967 and 1970. The PLO guerillas were known as fedayeen in Arabic. During that time, Fatah and number of other activists---including social democrats and Marxist revolutionaries---took over the PLO and set up a virtual state-within-a-state in Jordan.

The PLO and the Jordanian government were not particularly friendly. The first PLO guerilla to be killed was shot by the Jordanian army not the Israelis. The government of King Hussein became increasingly aggravated with PLO as they used Jordan for a staging area for raids into Israel, promoting numerous Israeli counter raids and retaliatory strikes in Jordan.

The PLO tried to take advantage of a weak government in Jordan and take control of Jordan. The move resulted in civil war in Jordan in September 1970. King Hussein moved to crush the PLO while the PLO attempted to oust the king. The PLO assumed that the large population of Palestinian refugees in Jordan would rally to their support, and tip the balance in their favor. The PLO guessed wrong. Although there were a few defections, the Jordanian army remained loyal to the King.

King Hussein’s Bedouin army, armed with U.S. support and weapons, put down the rebellion and napalmed and staffed Palestinian refugee camps. Many innocent people got caught in the middle of the fighting. Perhaps thousands of civilians died. Many Palestinians hated King Hussein as a result of the conflict and many members of the Jordanian army hated the Palestinians. During the fighting Israel amassed troops on border to show support for Hussein.

The fighting came to an end after a cease-fire was brokered at an Arab summit in Cairo and announced on September 27, 1970. The Red Cross estimated that 3,000 people were killed. The Jordanians said the figure was much lower. Arafat was smuggled out of Jordan disguised as a Kuwaiti official and most of the PLO fighters were forced to move to Lebanon. Many Palestinians remained in Jordan but their numbers were greatly reduced and their activities were strictly controlled by the government. 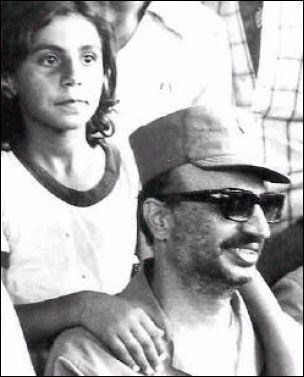 Arafat in Lebanon Thousands of Palestinians fled to refugee camps in Lebanon in the late 1960s to escape the civil war in Jordan and fighting in Israel. Some 400,000 Palestinian refugees sought refuge at camps in Lebanon. After a cease-fire was brokered between the PLO and Jordan at an Arab summit in Cairo on September 1970, the most PLO fighters moved to Lebanon, where the PLO helped to destabilize the country and push it towards civil war. The PLO set up its headquarters in West Beirut. They used the rugged country in southern Lebanon to launch attacks on Israel.

The PLO launched a state within a state in southern Lebanon in 1969 that operated until the Palestinians were thrown out of Lebanon in 1982. The PLO ran schools that increased the literacy rate of Palestinian children and took over the duties of a government: collecting garbage, delivering mail, and running a police force, prisons and criminal courts. It established a “revolutionary penal code, and providing flour and food not only for Palestinian but also for Lebanese. Arafat greeted world leaders in Beirut and top PLO officials were well paid.

Arafat was at the pinnacle of his career in the 1970s and early 1980s, when the PLO was based in Lebanon. He was not only the leader of the Palestinians but was also the most powerful man in war torn Lebanon. At that time he headed a 20,000 guerilla force and controlled the Muslim parts of Lebanon, which covered 40 percent of the country.

The PLO had a mixed record governing Lebanon. Poor living conditions persisted in slums and refugee camps and corruption was rampant. PLO leaders lived in luxury apartments, drove around in $150,000 bulletproof limousines and hosted parties with caviar while food and gasoline shortages occurred and uncollected garbage rotted in heaps as workers refused to show up for work. Under the PLO schools become hotbeds for radicalism, and a lack of government control helped push Lebanon into civil war.

The PLO staged raids and conducted shelling attack at targets in Israel, which prompted Israel to launch counterattacks into Lebanon. In 1982 after Israel invaded Lebanon for a second time in part to attack and quiet PLO strongholds in southern Lebanon that were bases for attacks on Israel the PLO was forced to leave Lebanon. 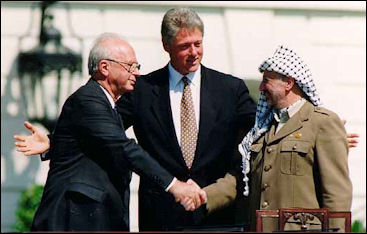 Bill Clinton, Yitzhak Rabin and Arafat
at the White House in 1993 After Lebanon the PLO was primarily based in Tunis, Tunisia. From Tunis Arafat both directed the intifadeh and sent dispatched envoys around the globe to express his willingness to make peace wih Israel. In the process he won United States recognition but alienated many of his staunchest supporters.

Arafat played all sides. He maintained a relationship with the CIA while courting the KGB and Soviets during his struggle in the 1970s and 80s against Israel. In 1988 he accepted Israel’s right to exist and renounced terrorism

Arafat and the PLO made the mistake of backing the Saddam Hussein during the Gulf War in 1990. Saudi Arabia and the Gulf states withdrew their financial support. The United States was angered. The Palestinians became isolated.

Arafat was inspired more by great revolutionaries and guerilla tactics than Muslim martyrs and radical Islam. He became more Islamic after radical Islamic came in vogue. His ability to endure was based on his charisma and his absolute control over PLO funds Although he was not directly tied to the terrorist activities of Palestinian groups in the 1970s and 80s and the suicide bombings of the 1990s and 2000s he is believed to ultimately have been behind many of the acts. Begin called him “that despicable guy with hair on his face.”