GREEN REVOLUTION AND IMPROVING AGRICULTURE IN THE DEVELOPING WORLD

IMPROVING AGRICULTURE IN THE DEVELOPING WORLD 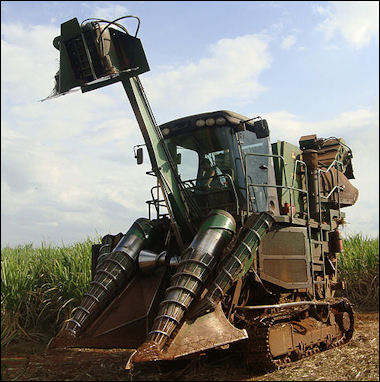 Sugar cane harvesting equipment Improving the agricultural sector is perhaps the best way to generate economic growth in poor countries. According to the World Bank, the very poor get three times as much extra income from an increase in farm productivity as from the same gains in industry or services.

Poverty expert Jeffrey Sachs of the Earth Institute of Columbia University argues that what the developing world needs most is more chemical fertilizer and high-yield seeds which makes it possible for farmers to raise their incomes because they not only can raise enough food for themselves but also can produce enough to sell at the market and contribute food to school lunch programs.

The Bill and Melinda Gates Foundation, in conjunction with the World Bank, is investing hundreds of million of dollars in developing countries, particularly in Africa, to empower poor farmers and local researchers. In 2008 the Gates Foundation announced a $306 million grant for agriculture in developing countries with half of the money going to replenish depleted soils and half going to increasing the productivity of African farmers, with some overlapping of the two. One of the key elements of the programs is a voucher system that cover around 75 percent of the costs and helps farmers buy fertilizer. Such a program in Malawi helped increase crop yields by 50 percent.

Among the things that rural farmers have said that is important to them is technology that can reduce the time it takes to water and tend crops along with garden and improved storage facilities and seed varieties.

These days national governments are often very stingy when it comes to agriculture aid, often not paying up on pledges. In September 2010, the FAO noted that only a small fraction — $420 million — of the $20 billion in agricultural development assistance pledged by the 2009 Group of Eight developed nations summit and $2 billion more from a later G-20 meeting had materialized. 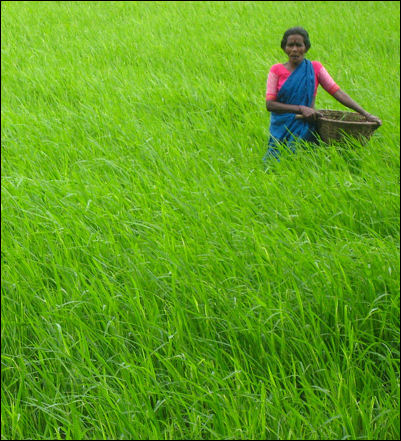 farm in India Agriculture is more productive than it used to be. A field of wheat that produced food for 5 people 75 years ago now produces wheat for between 20 and 50 people. New plant varieties and advances in technology have boosted corn and wheat yields by nearly 80 percent. This so-called Green Revolution began in the 1960s when the Iowa-born plant scientist Norman Borlaug developed a hybrid strain of wheat that was much more productive than natural strains. Borlaug's "miracle wheat" allowed Mexico to triple its grain production in a few years. When the hybrid was introduced to south Asia in the mid-1960s, wheat yields there leapt 60 percent. New strains of rice and other grains followed. Borlaug died in 2009 at the age of 95. The United Nations Word Food program credited him with saving more lives than any man in history. He received the Noble Peace Prize in 1970.

One of the key advances of the Green Revolution was developing wheat with very short stems. Compared with traditional taller stemmed varieties, the short-strawed strain shifted a higher proportion of plant sugars into the part of the plant where the grain were formed. In this way the plants produced much more food and the result was dramatically higher yields.

Crop yields have soared in Ethiopia and Malawi where modern farming technology has been introduced to peasant farmers. The so called “Malawi miracle” — in which the corn harvest reached 3.44 million metric tons, increasing food production from a 44 percent national deficient to an 18 percent surplus — came about after the country’s own government decided to fork out the money for hybrid seeds and fertilizer, and was assisted by the World Bank in making it happen, using a voucher system.

Problems with the Green Revolution

The Green Revolution has not been a total success story. The amount of landless peasant dramatically increased after Green Revolution was introduced. Studies have show that high-yield dwarf or hybrid crops are more labor intensive not less.

Some environmentalist have argued that the Green Revolution is really an "oil revolution." Higher yields, they say, are more the result of petroleum-fueled machines and petrochemical fertilizers than new plant hybrids. Moreover, the pesticides and fertilizer have been harmful to the environment and degraded the land over time.

Norman Borlaug The main problems with the short-stemmed wheat and high-yield rice is that they need lots of fertilizer and rely on heavy machinery to harvest the high yields efficiently. It can be argued that even though Borlaug created his plant strains for the developing world it was the farmers in the developed world — who in many cases have received subsidies to help pay for fertilizer and sold their grain as animal feed — that profited the most. In the developing world, farmers and the countries themselves in some cases went into massive debt to pay for fertilizers. And not only that, food from the subsidized farmers in the developed countries drove down prices making farmers and their countries poorer than they otherwise would have been.

Micheal Poolan, a professor at Berkeley told National Geographic, “The only way you can have one farmer feed 140 Americans is with monocultures, And monocultures need lots of fossil-fuel-based fertilizers and lots of fossil-fuel-based pesticides, That only works in an era of cheap fossil fuels, and that era is coming to an end. Moving anyone to a dependance on fossil fuels seems the height of irresponsibility.”

Producing massive amounts of grains like wheat also degrades the soil. The land must be ploughed and cultivated each year and for long periods of time is bare, a situation that rarely occurs in nature. Stripped of its cover the soil’s organic matter oxidizes, releasing carbon dioxide into the atmosphere, contributing to global warming. The addition of chemical fertilizers offers temporary relief for crops but the soil itself is weak and easily erodes away.

Some have argued that the whole Green Revolution has been a sham. Vandana Shiva, a nuclear physicist turned agronomist, told National Geographic, “I call it a monoculture of the mind. They just look at yields of wheat and rice, but overall the food basket is going down.” There were 250 kinds of crops in the Punjab before the Green Revolution. Now mostly wheat is grown. Shiva argues that biologically-diverse farms can produce more food with less petroleum-based additions. Her research has shown that compost can be just as effective as a fertilizer and is more beneficial to the soil in the long run.

A Japanese housewife-run NGO called NICCO has introduced an "ecological sanitation toilet," which converts human waste into safe and effective fertilizer, in poor countries like Malawi. Asako Kisui wrote in the Yomiuri Shimbun, “The toilet is designed to use separate tanks--one for urine that can be immediately used for fields if it is diluted with water and the other for solid waste that is likely to include pathogens. The solid waste can be converted into fertilizer through a process that includes mixing it with ash to make it alkaline to kill the pathogens, and drying it for about six months. [Source: Asako Kisui, Yomiuri Shimbun, October 26, 2011]

In Malawi the toilets were not used effectively by local people at first. They sometimes used the toilets as storage sheds as they had no habit of using human waste to make fertilizer. To convince Malawian farmers of the effectiveness of fertilizer derived from human waste, NICCO showed them a comparison of corn crop yields in a field with such fertilizer and a field without it. Crop yields in the fertilized field were 2.3 times bigger than those in the unfertilized field. Seeing the results, an increasing number of farmers began to use the toilet.

A total of 666 toilets were then constructed in the country. The Malawian government praised the toilets and began to investigate benefits of using them, according to NICCO. Morie Otoyo, 33, a NICCO staffer stationed in the country, said: "Villagers are pleased, saying things like, 'We could buy new cattle, as our cash income has increased.' Compared with the time when people simply dug holes to use as toilets, the number of dysentery and cholera infections has decreased."

Barley Traditionally mankind has relied on 7,000 plant species for their basic food needs. These days, mechanized agriculture has whittled that number down to 150 species, with the majority of people living on only 12 different plants. Hundreds of varieties of corn, wheat, potatoes and tomatoes and other crops have disappeared. Many blame the Green Revolution which promoted the standardization of agricultural techniques and the use of uniform, high-yield crops.

Many of the world’s food crops come from single strains or varieties that are vulnerable to devastating diseases or pests like fungus that caused the Irish potato famine in the 19th century, Panama disease which wiped out much of the commercial banana crops in the 1950s and 60s or a corn fungus that devastated the corn crop in the southern United States in 1970. Different varieties may also be needed in the future to meet challenges presented by changing climate conditions associated with global warming and other environmental challenges.

There is a growing movement to protect crops diversity and discourage use of single crop types. The United Nations Treaty on Plant Genetic Resources for Food and Agriculture, which goes into effect in 2006 requires countries to preserve existing crops and calls for the creation of an international system for sharing crops and plant genes. Unfortunately, already many strains and plant types have been lost

Widely consumed and used food crops are sold in world commodities markets. Sometimes people buy futures (a promise to buy a commodity in the future at a specific price) as a hedge for some unforseen problem or as speculative move to make money. The world price for commodities is often set as much by speculation as it is by economic fundamentals such as production, demand and supply.

A futures contact is an obligation to buy or sell a commodity at a set price for delivery by a specific date.

Cut flowers are increasingly becoming a lucrative crop in the developing countries in Asia, Africa and Latin America. "Flowers are giving much higher returns than other traditional crops. But the initial investment is very high. You have to wait for four to five years for breakeven," a farmer in India told Reuters. [Source: Reuters Life! May 19, 2011]

In places like India demand is not just coming from abroad. It is also coming from domestic markets. Flower production has boomed in India, as its eight per cent annual growth boosts incomes in the middle class. Wedding halls are often crammed with blossoms and frequent festivals are seen as an occasion for garlanding with hot-hued blooms. "Previously, people had been using flowers only for big functions. But now, even for a small function they are buying," said Kiran Nanavare, a 31-year-old flower trader based in Pune in Maharashtra."Every year we are seeing a rise in demand." Flower stalls dot every market and many street corners in India's big cities, selling loose stems or elaborate bouquets and set-piece presentation arrangements.

There are a lot price swings and seasonal peaks and valleys in the flower market. Prices for out-to-please gerbera can rise to seven rupees in the peak wedding season, Nanavare said, but can fall to four rupees in mid-June during the monsoon months when heavy rains and sultry temperatures keep partying subdued. "Interior decorators buy during the wedding season in large amounts, but throughout the year demand remains there from small vendors" who organise buffet functions and other ornamental occasions, Nanavare said.

Some farmers in the country's rugged rural expanses are now trying to explore the global market as well, mostly with Dutch roses, but that takes more sophisticated technology. "We don't have cold storage facilities for exports. Once we get that we will test how demand is for Indian flowers in other countries, where prices are much higher," one farmer said