vase with athletes Ancient Greece was divided into different city states. Although they had different political organizations and specific social and cultural patterns they were unified by a common language and religious heritage. The city states often fought one another and were not unified until they were conquered in 338 B.C. by Philip II of Macedonia, the father of Alexander the Great.

Carol Alexander wrote in National Geographic, “Ancient Greece was known as Hellas. Despite its profound impact on Western civilization, it was a small place made of isolated city-states separated by mountains and seas. Although they sometimes formed alliance, the Greece city states never coalesced into a nation or an empire like Rome. They were too independent and ambitious for that. Even so they shared a common language and rich tradition of sport, art, architecture, literature and philosophy.”[Source: Carol Alexander, National Geographic, January 2000, February 2000 and March 2000]

Ancient Greece arguably had more lasting impact on Western civilization and culture than any other ancient culture. The cultures in ancient Mesopotamia and Egypt were interesting and produced a few things of lasting importance. The Romans created a great empire and developed the laws, military and bureaucracy to maintain it but they did not create the great art, literature and the philosophy of the Greeks nor pioneer the ideas of democracy, freedom and the scientific method as the Greeks did. Ancient Greece gave the world its architecture, its statuary, the Olympics, coinage, theater and literature, and lies at the foundations of the cultures in Europe and the Americas and have had a profound influence on all the nations of the world. [Ibid]

How We Know What We Know about the Ancient Greeks 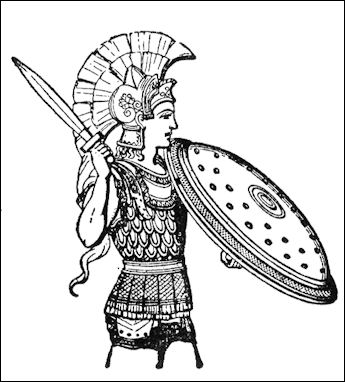 Greek armor Almost everything we know about ancient Greece and Rome has been ascertained from historical, philosophical and literary texts (most of which reached us through the efforts of Arab scholars and medieval European monk scribes); archaeological excavations; art work (most of it painted on vessels, jugs and vases); and sculptures and friezes. Much of what is known about Greek civilization before for the 8th century B.C. has been derived from the Homeric classics, some other texts and some artifacts — but for the most part there isn’t that much material. The period from the 8th century to 4th century B.C. is much richer. There is a great deal of art, literature, documentation and architecture that has survived from this period, providing a much clearer picture of what went on, particularly in cities such as Athens and Sparta. We know more about the Greeks and Romans than, say, the Celts and Visigoths who lived around the same time, because the Greeks and Romans had a written language and these other cultures didn't. Because only a very few people knew how to write after the alphabet was developed, little is known about Greek history during the sixth and seventh century B.C. when the alphabet emerged. Archaeologists and historians warn that with ancient history one must tread carefully and go only as far as the data takes you, understanding the limits and realizing the fragility of the constructs and presence of contradictions. History is derived from the Greek word “historia” , meaning"inquiry" or "knowing by inquiry." Ancient history is often based on hearsay and biased accounts. Many historians who give us the first accounts of events reported on these events centuries after they took place.


Venus de Milo The Greeks have been described as imaginative and spiritual while the Romans were said to be more closely bound to the world they saw in front of them. The Greeks produced the Olympics and great works of art while the Romans devised gladiator contests, emphasized the pursuit of pleasure and copied Greek art.

“ The Greeks shape bronze statues so real they
they seem to breathe.
And craft cold marble until it almost
comes to life.
The Greeks compose great orations.
and measure
The heavens so well they can predict
the rising of the stars.
But you, Romans, remember your
great arts;
To govern the peoples with authority.
To establish peace under the rule of law.
To conquer the mighty, and show them
mercy once they are conquered.”

The Greeks called their land Hellas and themselves Hellenes. It was the Romans who called them Greeks (Graeci ). According to the Canadian Museum of History: Greece “was never a united nation with fixed geographical borders. Rather it was a collection of city-states (although town-state or even village-state would have been more accurate for few had the population to be called a city.) These city-states were like a large family of quarrelsome brothers, almost always fighting with each other, but occasionally, banding together to battle against outsiders when they felt like doing so. Afterwards, they were as likely as not to turn on each other again. [Source: Canadian Museum of History historymuseum.ca |]

“The Greeks have often been described as “independent-minded” and there seems no doubt that geography played a major role in shaping that character. It was the mountains and the sea that molded Greece and Greeks into what they were. Mountains in Greece don't soar to the heights of other mountain ranges such as the Andes, Rockies, Alps or Himalayas-but they are extensive. In fact, about 80 percent of Greece is covered with mountains with the result that most settlements were less than 10 miles from a mountain. These mountain ranges isolated regions from each other more effectively than fences because what they lack in height they make up with steepness and ruggedness preventing or discouraging overland travel and communication.” |

John Seabrook wrote in The New Yorker: “One could dare hope for one or two of the lost histories of Livy, of whose hundred and forty-two books on the history of Rome only thirty-five survive. Or perhaps one of the nine volumes of verse written by Sappho, the Greek poet; only one complete poem remains. By some estimates, ninety-nine per cent of ancient Greek literature has been lost, and Latin has not fared much better. [Source: John Seabrook, The New Yorker , November 16, 2015 \=/]

“Among those works we know are missing are Aristotle’s second volume of the Poetics, which was on comedy; Gorgias’ philosophical work “On Non-Existence”; the four missing books of the Roman historian Tacitus’ Annals, covering Caligula’s reign and the beginning of Claudius’; Ovid’s version of “Medea”; and Suetonius on the Greek athletic games. (His “Lives of Famous Whores” also, sadly, has not survived.) Greek tragedy has been decimated. According to the Suda, the tenth-century Byzantine encyclopedia of classical culture, Euripides wrote as many as ninety-two plays; eighteen survive. \=/

“We have seven each from Aeschylus and Sophocles, who wrote about ninety and a hundred and twenty, respectively. “And that’s just the big three of tragedy,” the writer and classics professor Daniel Mendelsohn told me. “Of the thousand that were likely written and performed during the hundred-year heyday of tragedy, we have only thirty-three extant plays—that’s about a three-per-cent survival rate.” \=/

Early Bronze Age (3000-2100 B.C.): Hereditary chiefs rule over villages and districts. The use of bronze, developed in the Near East, replaces copper & stone. |

Middle Bronze Age (2100-1600 B.C.): 1) Migrating groups, speaking an early form of Greek, arrive from the north and the east. 2) The Minoan civilization, centered on Crete, flourishes. They had huge palaces on Knossos, a writing system (Linear A), large fleets of ships, traded extensively, painted wonderful murals and had lots of leisure time and activities. 3) In 1646 B.C. a massive volcanic eruption had devastating impact on ancient island of Thera (modern-day Santorini). |

Late Bronze Age (1600-1150 B.C.): 1) The Mycenaean civilization learns from and then conquers the Minoans, taking over their power centers and creating small kingdoms. Ruling class buried in “shaft graves” with burial goods ranging from bronze weapons to pottery and jewelry. They also built beehive-shaped, well-engineered “Tholos” tombs. 2) The Mycenaeans developed their own (Greek) system of writing- Linear B- modeled on the Linear A of the Minoans. 3) The Trojan War, if it happened, took place between 1250-1225. 4) Invaders, volcanoes and earthquakes destroy palaces and bring an end to the Mycenaean civilization. The identity of the invaders remains one of the mysteries of archaeology. |

The Dark Age (1150-750 B.C.): 1) Iron technology takes over from bronze. The art of writing has become lost. Stone building is small and infrequent. Trade is diminished. Little production by Greek artisans and craftsmen. A dark age descends over Greece. 2) Behind the “dark curtain” things are happening. There is a big increase in population and manufacturing. Borrowing from the Phoenicians, the Greeks develop their own alphabet. Temples are built. 776 B.C. is generally regarded as the date for the first Olympic games. |

Archaic Period (750-490 B.C.): 1) The rise of city-states as the largest political unit. 2) The epic poems The Iliad and The Odyssey were composed. 3) Overseas colonization begins. 4) First Greek coins are made. 5) Black-figure pottery emerges at Corinth, later in Athens. 6) Tyrants seize power in many cities; Athens takes its first steps towards democracy. Draco, Solon, Cleisthenes are key figures. 7) Beginnings of science and philosophy, advances in medicine. 8) Athenian red-figure pottery emerges. |

Map of the Athenian Empire in 431 BC

Hellenistic Period (323-30 B.C.): 1) After Alexander’s death there was a prolonged struggle for control of his Empire. The culture and language of Greece had been spread at least as far as the invasions of his army. 2) Research center at Alexandria- the Museum- established. 3) Rome destroys Corinth (146 B.C.) and Athens (86 B.C.) and annexes Greece and Macedon. 4) The Battle of Actium and the suicide of Cleopatra ends the era of ancient Greece. The poet Horace said “Greece, the captive, took her savage victor captive.”|