5th century Bodhisattva
from Yungang, China “Bodhisattvas” are being who have progressed along the path to perfect enlightenment and salvation. Because they are so spiritually advanced, and as part of their spiritual work, they choose to convey religious assistance to devout but ordinary mortals. They are sort of like the equivalent of Buddhist "saints" and are especially important in Mahayana Buddhism. To Mahayana Buddhists they are "near Buddhas" or “enlightened persons” on the verge of nirvana who purposely stopped short of attaining it, so, like Buddha, they could teach their method to others and help humanity move towards enlightenment. “Bodhi” means “enlightenment” and “sattva” means “being.”

Bodhisattvas are especially important to Mahayana Buddhists. Mahayana temples often feature images of the Bodhisattvas Maitreya and Amitabha. Maitreya, often portrayed as fat and happy, is supposed to become a Buddha 25,000 years after the death of Gautama. Amitabha, the Buddhist equivalent of a savior, who helps followers get into "heaven." Mahayana Buddhists believe that anyone can be a Bodhisattvas. Buddhist ascetics who live in caves and renounce all worldly possessions and spend their lives begging and meditating are people aspiring to Bodhisattvas.

The conceptions of these Bodhisattvas, often show foreign, non-Indian elements, particularly from Iran. Many of them are worshiped with the same level of reverence as The Buddha himself. In some cases the worship of certain Bodhisattvas preceded the worship of The Buddha.

Vidya Dehejia, a professor at Columbia University, wrote: “ Bodhisattvas became exceedingly important in the Buddhism of the Himalayan regions of Kashmir, Nepal, and Tibet and in the art of Southeast Asia. Each is recognized by his identifying attributes. Thus Avalokiteshvara (the Bodhisattva of Infinite Compassion) carries a lotus and has a small Buddha image adorning his crown, and the Bodhisattva Maitreya (the Buddha of the Future) carries a water vessel and has a stupa in his crown. Goddesses, too, were introduced into this later Buddhism, and Tara, who holds a lotus, is one of the most deeply venerated. [Source: Vidya Dehejia, Department of Art History and Archaeology, Columbia University Metropolitan Museum of Art] 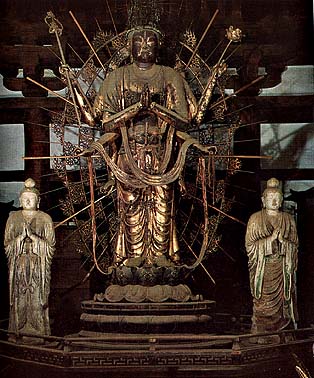 Japanese Bodhisattva
The Buddha said: "Some is called a Bodhisattva if he is certain to become a Buddha...This change from an ordinary being to a Bodhi-being takes place when his mind has reached the stage when it can no longer turn back on enlightenment. Also he has gained the five advantages; he is no more reborn in the states of woe, but always, among gods and man; he is never born in poor or low-class families; he is always male, and never a woman; he is always well-built and free from physical defects; he can remember his past lives, and no more forgets them again."

The Mahayana Buddhists define ten stages which a Bodhisattvas must pass through to reach Buddhahood. Nagajura, the greatest Mahayana thinker, reached only the first stage. The first stage corresponds to levels of perfection. At stage six nirvana is attainable but rejected . From then on the Bodhisattvas is reborn miraculously and possesses special powers that he uses to help mankind. In the seventh stage he gains “sovereignty” over the world and enters the realm of celestial Bodhisattvas as the “Crown Prince” of Dharma.

The Bodhisattvas are routinely tempted, confused and attacked by the forces of darkness and evil and are often helped by gods, goddess and other celestial beings. The implication is that through the nearness to the Enlightenment they have became more mystical and are more susceptible to magic and celestial influences.

The Bodhisattva ideal is an important concept in Mahayana Buddhism. It describes the Christian-like willingness of Bodhisattvas to sacrifice themselves for the benefit of others to show them the way to enlightenment. The best example of the Bodhisattva ideal comes from The Buddha himself. He experienced the enlightenment and then spent 45 years teaching others how to do the same.

The Bodhisattva ideal begins with the premise of compassion for all living things buttressed by the belief that the gift of Buddha’s teaching is the only thing of true value one person can offer someone and to offer it in a selfless way one must be able to achieve enlightenment themselves. The sentiment is summed up with the famous Buddhist axiom: “Can there be bliss when all that lives must suffer? Shalt thou be saved and hear the whole world cry?”

Enlightenment itself is an issue. In the traditional Indian sense, nirvana was something that was so overpowering it sort swallowed up those who experienced it and they were never heard from again. From the Mahayana point of view this is selfish. Mahayana Buddhists look down on Theravada Buddhist monks’some of them The Buddha’s own disciplines — who experienced enlightenment and disappeared into the netherworld, Mahayana Buddhists say, looking down on the affairs of humans as trifling.

Bodhisattvas that attain the status of celestial Bodhisattvas often became the objects of religious worship. They have names and spiritual and visible attributes. The include Avalokitesvara and many other beings also regarded as gods. See Gods

'Shikshasamuccaya,' 280-2 on “The Bodhisattva's Infinite Compassion” in the 'Vajradhvaha-sutra' goes: “A Bodhisattva resolves: I take upon myself the burden of all suffering. I am resolved to do so, I will endure it. I do not turn or run away, do not tremble, am not terrified, nor afraid, do not turn back or despond. And why? At all costs I must bear the burdens of all beings. In that I do not follow my own inclinations. I have made the vow to save all beings. All beings I must set free. The whole world of living beings I must rescue, from the terrors of birth, of old age, of sickness, of death and rebirth, of all kinds of moral offence, of all states of woe, of the whole cycle of birth-and-death, of the jungle of false views, of the loss of wholesome dharmas, of the concomitants of ignorance, from all these terrors I must rescue all beings. [Source: Edward Conze, in Conze, et al., Buddhist Texts through the Ages (Oxford: Bruno Cassirer, 1954), Eliade Page website]


Bodhidma, founder of Zen “I walk so that the kingdom of unsurpassed cognition is built up for all beings. My endeavours do not merely aim at my own deliverance. For with the help of the boat of the thought of all-knowledge, I must rescue all these beings from the stream of Samsara, which is so difficult to cross, I must pull them back from the great precipice, I must free them from all calamities, I must ferry them across the stream of Samsara. I myself must grapple with the whole mass of suffering of all beings. To the limit of my endurance I will experience in all the states of woe, found in any world system, all the abodes of suffering. And I must not cheat all beings out of my store of merit, I am resolved to abide in each single state of woe for numberless aeons; and so I will help all beings to freedom, in all the states of woe that may be found in any world system whatsoever.

“And why? Because it is surely better that I alone should be in pain than that all these beings should fall into the states of woe. There I must give myself away as a pawn through which the whole world is redeemed from the terrors of the hells, of animal birth, of the world of Yama, and with this my own body I must experience, for the sake of all beings, the whole mass of all painful feelings. And on behalf of all beings I give surety for all beings, and in doing so I speak truthfully, am trustworthy, and do not go back on my word. I must not abandon all beings.

“And why? There has arisen in me the will to win all-knowledge, with all beings for its object, that is to say, for the purpose of setting free the entire world of beings. And I have not set out for the supreme enlightenment from a desire for delights, not because I hope to experience the delights of the five-sense qualities, or because I wish to indulge in the pleasures of the senses. And I do not pursue the course of a Bodhisattva in order to achieve the array of delights that can be found in the various worlds of sense-desire. And why? Truly no delights are all these delights of the world. All this indulging in the pleasures of the senses belongs to the sphere of Mara.”

Eversweeping asks for the “supreme dharmas of a Buddha.” Sakra explains that this is beyond his means and asks Eversweeping to chose something else. Eversweeping replies: “Do not trouble your mind about the mutilated condition of my body! I shall now make it whole again by the magical power of my enunciation of the Truth. If it is true that, I am bound to win full enlightenment.”

“That very moment, instant and second, through The Buddha’s might and through the prefect purity of the Bodhisattva’s resolution, his body became again as it had been before, healthy and whole.” The story then continues with Eversweeping going off in the company of 500 maid servants to his meeting with Dharmodgata. Everlasting listens to a sermon on Perfect Wisdom and then enters into a seven year trance with Dharmodgata. When they awaken Eversweeping sheds his blood to help Dharmagota defeat Mara and is rewarded with millions of trances in which he “sees The Buddhas and Lord on all the ten directions, in countless world systems.”


Akasagarbha Jampelyang (Manjushri) is the Bodhisattva of Wisdom. He is regarded as the first divine teacher of Buddhist thought and is sort of a patron saint for school children. In his right hand is a flaming sword that cuts ignorance. His left, in the “teaching” mudra, cradles a half-opened lotus blossom. He is often yellow and has blue hair or a crown.

Drolma (Tara) is a female bodhisattva with 21 different manifestations. Known as the saviouress, she was born from a tear of compassion shed by Chenresig (Avalokiteshvara)and considered a female version of Chenresig and a protectress of the Tibetan people. She symbolizes purity and fertility and is believed to be able to fulfill wishes.

Drolma is often picturesd in a longevity triad with the red Tsepame (Amitayus) and the three-faced, eight-armed female Namgyelma (Vijaya). In her green manifestation Drolma sits in a half lotus position on a lotus flower. In her white manifestation she sits in a the full lotus position and has seven eyes, including ones on her forehead, both palms, and both soles of her feet.