ZIONISM, CREATION OF ISRAEL AND JEWS IN THE 20TH CENTURY

JEWS IN THE 20TH CENTURY

New immigrants to Israel Judaism and the Jewish people have been affected and shaped very much by two 20th century events: the Holocaust and the creation of Israel. Although these events were historical in nature had religious overtones in their interpretation as the destiny of a people chosen by God to suffer and fulfill a special destiny.

Secularism was embraced by many Jews. In the United States there were only five Jewish day schools in the whole country in the early 20th century. By 1930, only a third of Jews belonged to a synagogue, and only a quarter of Jewish children were receiving any kind of religious instruction. Hebrew all but died out and Jewish scholars lamented about “institutional decay” of American Judaism. Jewish identity was still strong but it was based on Jewish culture, Zionism and campaigns against anti-Semitism rather than on religion. 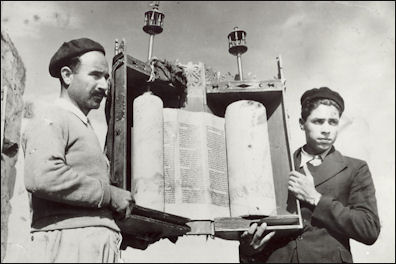 Torah Book in Porat Israel was set up with the purpose of providing a home and shelter for Jews. This concept is tied up with the idea of Zionism. Zionism is a secular movement based on the idea that Israel was a nation like any another except that it lacked a homeland and the goal was to create a secular homeland for them. Religious Zionists embraced the movement as fulfillment of Judaic doctrines, Biblical prophecies and destinies of the Jewish people as dictated by God.

A movement to create a Jewish homeland began in the mid 19th century when Jewish populations were exploding, poverty was rampant, waves of pogroms were being leveled against the Jews and large numbers of Jews were migrating to the United States and western Europe, where they were assimilating into dominate cultures, making contributions to these cultures and being influenced by ideas of socialism and nationalism.

Some have argued that Zionism developed as a response to the inability of the Jews to emancipate themselves socially from the world they lived in and felt they had no other choice but to create their own homeland.

Theodor Herzl (1860-1904), the father of modern Zionism, was an assimilated Budapest Jew who worked as a journalist in Vienna. At first he advocated assimilation of Jews into Gentile society as a solution to the Jew’s problems. He took up the cause of establishing a Jewish homeland in Israel (Zionism) when he came to the conclusion that anti-Semitism was ingrained in Europe after covering the Dreyfus Trial in Paris (in which a French Jewish was imprisoned on trumped up charges).

Herzl wasn’t the first person to propose the idea of a Jewish state but he was the first to offer a plan of how such a state could be realized in the modern world. Herzl said, "Dream is not so different from deed as long as many believe...The Jews who wish it will have their state and they will earn it." 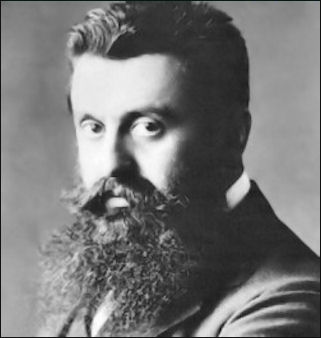 Herzl Herzl took up the Zionist cause when he was in his mid-30s and devoted the rest of his life to it. He described his dream in a series of books. In his 1886 book “Der Judenstaat” (“The Jewish State”) he argued that Jews would never fit into Europe and that establishing a Jewish homeland was the only way they ever be secure and at peace. In his 1902 utopian “Altneukabd” (“Old-New Land”) he described a world in which Jewish Palestine was the center of commerce.

Herzl wrote letters to influential men throughout Europe on the importance of creating a Jewish homeland organized the first International Zionist Congress in 1897 in Basel, Switzerland and helped set up Zionist organizations in all countries where there were a large Jewish populations

Zionism calls for the creation of a Jewish homeland state in Biblical Israel. It is based on the practical idea of establishing a nation for Jews and rooted in the spiritual idea of returning to Zion (the promised land or Jerusalem), referred to as the Land of Israel (Eretz Israel ). Mount Zion is a place in the in the Old City of Jerusalem, where it is said David was buried (and Christ had his Last Supper).

Zionism was also based on the idea of uniting Jews scattered all over the world in a single homeland. Herzl said in 1897, “Zionism has already brought about something remarkable, heretofore regarded as impossible: a close union between the ultramodern and the ultraconservative elements of Jewry.”

Although the name Zionism conjures up images of religious extremists, its 19th century founders Zionism were antireligious European intellectuals inspired not by religion but by socialist and nationalist sentiments prevalent in Europe at that time. The Zionist Congress of 1897 was fundamentally a nationalist movement. It stated in its final resolution that “the goal of Zionism is the establishment for the Jewish people of a home in Palestine guaranteed by public law.”

Book: “From Herzl to Rabin: The Changing Image of Zionism” by Amnon Rubenstein (Holmes & Meier)

Zionism became different things to different people. To religious Jews, Zionism was the idea of returning to Jerusalem as the religious homeland of the Jews: a metaphysical place deep-seated in the Jewish consciousness, an answer to 2,000 years of prayers. It was a “divinely ordained” and “intrinsically holy” idea expressed throughout the centuries by the expression of hope and promise, “Next year in Jerusalem.”

To secular Jews, Zionism expressed the dream of creating modern Jews that ascribed to the same principalis as altruist, socialist gentiles. Dr. Chaoim Weizmann, a leading spokesman and negotiator for the Zionist cause, said: “There should be one place in the world, in God’s wide world, where we could live and express ourselves in accordance with our character and make our contribution.” The Zionist curriculum in schools has traditionally attempted to downplay the experience of the Jewish people and their connection to the land while promoting universal values and history.

For others Zionism was justice for 2,000 of years of exile, discrimination and murder directed at the Jews and a guarantee that such things would not happen again. These people argue that if Israel been created a decade earlier the Holocaust would never happened. 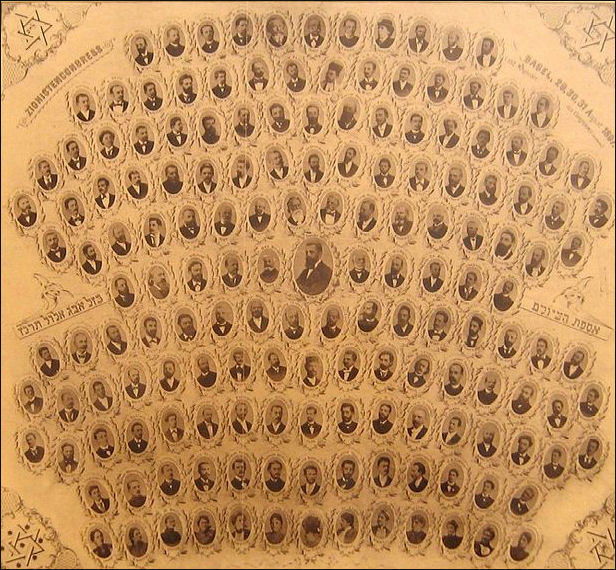 Many modern Israelis believe that Zionism has been a success. One Israeli Zionist told the Los Angeles Times, “We came to Israel to build a state so that the word ‘victim’ wouldn’t be part of our vocabulary. It strikes at a very deep chord.” Many Jews feel they were too passive during the Holocaust when they were led to the Nazi gas chambers “like sheep to the slaughter.”

Zionism has few links with religion and is viewed by ultra-Orthodox Judaism as backward. The founding Zionist fathers would be appalled by the power and influence of ultra-Orthodox in Israel today.

Hannah Arendt, the author “Eichmann in Jerusalem” and the source of term “Banality of Evil,” was against Zionism. She said that Jews no longer believed in God; they only believed in themselves. “In this sense,” she said “I don’t like the Jews.”

According to an advertisements run by the True Torah Jews in the Washington Post and New York Times and other newspapers: “Zionism is not Judaism. The Zionist ideology is fundamentally anti-Torah. Zionism has not only denied the fundamental Jewish belief in Heavenly Redemption it has cerated a pseudo-Judaism which replaces the Torah with nationalism...Thus, the State of Israel cannot — and should not — claim to represent worldwide Jewry....True Torah Jews are outraged by this ongoing ploy, in which the Zionists attempt to create the impression that the holy Torah is behind their hard-line , nationalistic goals. It is not!”

The Old Testaments describes the Jews as God’s Chosen People and describes three different sets of boundaries for Israel; the book of Prophets, three more; and the Rabbinic authorities, a seventh. According to Joshua 15:1-12, God gave Judah, the forth son of the Patriarch Jacob, the relatively modest chunk of land between the Dead Sea and the Mediterranean. The Jewish kingdom reached its greatest extent under David around 1000 B.C. when it stretched from the Sinai to the Euphrates River and included large chunks of present-day Jordan, Syria, Lebanon and Egypt. David’s kingdom lasted less than a century but it fulfilled a promise made by God to Abraham (Genesis 15:18): “To your offspring assign this land, from the river of Egypt [in the Sinai] to the great river, the river Euphrates.” Centuries after David’s kingdom was lost, the Prophet Ezekial dreamed (47:13-20) of Israel’s exiles returning to a land restored to borders of David’s kingdom. 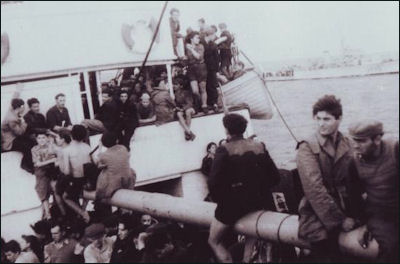 In Deuteronomy 11:24-25 God promised Moses: “Every spot on which your foot treads shall be yours; your territory shall extend from wilderness to the Lebanon and from the River — the River Euphrates — to the Western Sea [the Mediterranean]. No man shall stand up to you; the Lord Your God will put the dread and fear of you over the whole land in which you set foot, as he promised you.”

Zionist dream is regarded as unfilled in part because most of the world’s Jews chose not move to Israel and Jewish suffering outside of Israel has not occurred. Of the world’s 13 million to 14 million Jews only 5.26 million live in Israel. More Jews live in the United States than in Israel.

Vladimir Jabotinsky was a rightist Zionist visionary who called for the creation of a Israel that covered the territory described in the Bible. Conversely, the founders of Zionism did not seek another sacred, anointed state defined by the Old Testament. Rather they wanted to establish a secular democracy with full equality for Arab citizens.

In the 17th century a charismatic rabbi by the name of Shabbetal Tzezi urged his followers to re-establish Israel in the Ottoman Empire. The Turkish sultan ultimately caught up with him and gave him a choice: convert to Islam or be put to death, he chose the former and to this day some descendants of his disciples practice a Jewish-flavored Islam. 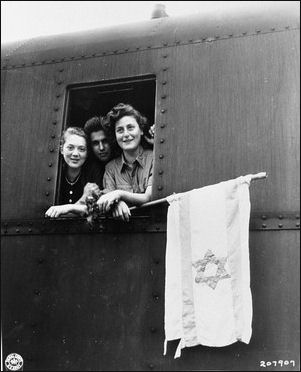 Children of Zionism Many Orthodox Jews believe the Torah states that Israel can not be created until the Messiah comes, thus posing them with a dilemma when Israel was founded in 1948. Some decided to reconcile their beliefs with “the facts on the ground” as Ariel Sharon later put it. Some refused, including the Satmar Hasidim, a large group of ultra-Orthodox Jews. To this day two Orthodox prayer books are printed, with one leaving out the “Prayer for the State of Israel.”

By the end of the 20th century Orthodox Judaism made a comeback and reformed ideas seem quaint and old fashioned. A younger more devout generation emerged. They brought back the old traditions, observed Jewish laws to the letter, with some embarking Messianic movements and moving to Israel because they regarded it as their Biblical homeland.

Recent years has been characterized by a battle between observant Jews and secular ones.