Cognac aging barrels Cognac is a remarkably smooth brandy made from twice-distilled wine or once-distilled brandy (wine that is distilled once is brandy). It is made from grapes produced in seven specific areas in the Cognac region. Cognac was invented about 300 years by an anonymous winemaker who first tried the double distilling process with the local mediocre wines. According to the Guinness Book of Records, the world's oldest cognac vintner, Augier Frères & Cie, was founded in 1643.

Described by Victor Hugo as "the drink of the Gods," Cognac begins as a 140 proof brandy. It is aged in oak barrels, where its gets it deep brown color, and diluted with pure water to reach a level of around 70 proof. A large amount of cognac, around 23 million bottles worth, evaporates during the aging process. The evaporated brandy provides nourishment for a black fungus that grows on the wall, building and even trees in the Cognac area. 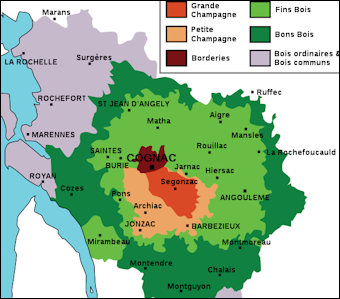 Cognac regions of France Only brandy produced in the Cognac region can be labeled as cognac. About 250,000 bottles of Cognac are produced a year, 80 percent of which is exported. About 90 percent of all Rémey Martin is sold outside of France. North Korean leader Kim Jong Il reportedly drinks a bottle of cognac a day and has massive liquor cellar well stocked with Hennessy XO.

Cognac is rated into three categories that are determined by how long it is aged. After 30 months it gets three stars; after four and half years, four stars ; and after 10 years it the highest rating: Royal or Napoleon. Quality is also determined by the region in which it is produced. Grande Champagne is regarded as the best and it is made only from grapes produced in Grande Champagne. Fine Champagne cognacs use a mix of Grande Champagne and Petite Champagne grapes.

Preparing absinthe
the traditional way Absinthe is an alcoholic drink made from wormwood, a reported hallucinogen, and flavored with a blend of anise, angelica root and other aromatics. It was a favorite of Toulouse-Lautrec, Oscar Wilde, Eduard Manet and Vincent Van Gogh and the subject of paintings by Degas, Manet and Picasso. Van Gogh reportedly had just drank some when he cut off part of his ear.

Absinthe was first produced for sale in 1797 by Henri-Louis Pernod, who reportedly got the recipe from a compatriot living in Switzerland. Known as the green fairy, absinthe was popular because it was cheap, had a strange green color and was 70 percent alcohol.

When water is added absinthe turns from neon green to cloudy emerald. Oscar Wilde wrote: "Absinthe has a wonderful color, green. A glass of absinthe is as poetical as anything in the world. What difference is there between a glass of absinthe and a sunset?"

After reports circulated that it produced addictions, delirium, blindness madness and epileptic seizures, absinthe was banned by the French government in 1915 during a period of "moral panic about its effect on working classes." Other governments followed suit.

Although illegal in most countries, absinthe is sold in Britain because it was never popular there are no laws were passed against it. In the 1990s it became a trendy drink at techno nightclubs. People that like it say its sweet, very smooth, warming and packs a strong kick. 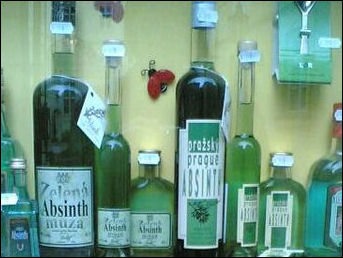 types of absinthe
Scotch malt whiskey, or Scotch, is a kind of whiskey produced in Scotland. There are two varieties: more expensive single-malt whiskey made only from malted barley: and grain whiskey made from malted barely together with unmalted barley, maize or other cereals. The most common brands are 60 percent grain and 40 percent malt. Scotch people say is less likely to produce a hangover headache than other alcoholic drinks.

Thanks mainly to successful marketing, single-malt Scotches are promoted as a prestige drink. More Scotch is consumed in France in a month than cognac is in a year. Even so, Scotch accounts for only 20 percent of worldwide sales. Most are used to add flavor to a blended whiskey.

In Scotland, people never say Scotch, they say whiskey. Scotch and Irish whiskeys are regarded as the first whiskeys. Other whiskeys around the world are made in a similar fashion. The Scotch name is legally protected.

Raw whiskey is clear. As it ages the wooden barrels give it its amber hue.

The earliest reference to whiskey in Scotland is a record on the 1497 Scottish Exchequer Rolls of one Friar John Cor purchasing a quality of malt to "make aqua viate." In the 18th century, Scots consumed more Scotch than water. Children were christened with it and even respectable gentlewomen began their day with it.

Historians say modern Scotch production began in the 1800s as an alternative to the harsh Scotch whiskeys, which were produced in home stills, including eight legal ones and 400 illegal ones in Edinburgh alone in 1777.

In the 1820s, Scotch-making began evolving from small family-owned enterprises to large manufacturing businesses. The invention of the patent still greatly aided the process. In addition to being cheaper and faster the new still allowed whiskey to be produced with a variety of grains without the need for the perfect mix of water and peat.

Purists claimed that the new varieties were not true Scotch and had a mediciney flavor. The debate lasted for centuries as to which was whether patent-still whiskey (as opposed to pot still whiskey) was even whiskey.

Glenfiddich distillery Scotch is usually distilled with Scottish Highland mountain stream water and barley, ideally roasted with a peat fire, or other grains (which doesn't have to be local). The process begins with the placing of plump and dry barley in tanks of local water for two or three days.

After the grain is soaked in water it is spread on a concrete floor or cylindrical drums to malt, or germinate, for between 8 to 12 days. Then it is dried in a kiln, ideally heated by a peat fire; ground, mixed with hot water and mashed in a huge circular vat called a “mash tun.” A sweet liquid called “wort” is drawn off from the porridge-like mixture and the remaining solids are fed to cattle.

The wort is placed in massive vessels containing 45,000 liters of liquid, which is mixed with live yeast which converts the sugar into alcohol in about 48 hours. This concoction is distilled two times (distinguishing it from Irish whisky which is distilled three times) to make it potent and to remove impurities. This is done by placing the liquid (now a weak alcohol called wash) into copper pots and heating it so the alcohol vaporizes. Alcohol vaporizes at a lower temperature than water and rises and flows down a pipe and condenses in a cooling plant as distilled alcohol.

Glenfiddich distillery The key to making good Scotch is knowing when the whiskey has been distilled sufficiently. This is done by using modern measuring equipment and the judgment and experience of the distiller. And only then and only then is it ready to be placed in oaken casks, where it ages for eight, twelve or even thirty years. Scotch needs to be aged at least three years to legally be called Scotch. The oaken casks give Scotch its amber color and remove some of the bite. They are burned on the inside and porous to allow air to enter the liquid. It is estimated that 20 million liters of Scotch evaporates into the air every year.

Different scotches have different blends of single malt whiskeys. The water, ingredients and distilling methods give them distinct flavors. While most casual drinkers can tell the difference between pure malt whiskeys and blended brands and little more, experienced drinkers can distinguish Highland malts from Lowland malts,Islay malts and Campbeltown malts.

Glenfiddich and Chivas and the Scotch Industry

Glenfiddich distillery stills The best Scotch, most Scots will tell you, is Glenfiddich. Representatives from the company that makes it says its owes its rich mellow taste to the water used in the distillation process. The water comes from a spring-fed burn in the Scottish highlands called Robbie Dubh.↔ The most expensive Scotch is 50-year-old Glenfidich sold at an auction for $71,200.

Chivas Regal is the world's most popular premium Scotch. The name Chivas can be traced back 500 years to an area between Aberdeen and Speyside, the heartland of malt whiskey distillation. Chivas is owned Seagrams.

The Scotch whiskey industry employs 14,000 people directly and supports more than 47,000 jobs in Scotland. There are over 100 Scotch distilleries in Scotland, most of which look like laboratory-factories filled with onion-shaped copper stills. Thirteen Scotch Malt Whiskey Distilleries can be visited in Scotland. They are the are scattered all over the country. Glenkinchie is closest one to Edinburgh. 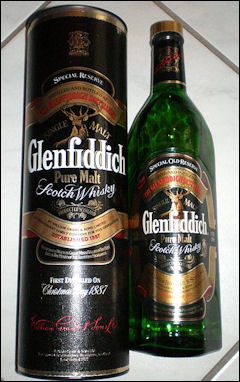 Scotch is one of Britain's top five export items. Over a billion bottles of Scotch whiskey are consumed each year, including 18,000 bottles that are shipped to the Vatican. The United States is the largest market, followed by France — where more Scotch is consumed in a month than cognac in a year — Spain and Japan.

Asia is the fastest growing market, where it is regarded as a prestige drink. In 1994, sales rose by 35 percent in Thailand, by 48 percent in South Korea and by 83 percent in Taiwan. In the 2000s, there was a large growth spurt in China. North Korean leader Kim Jong Il reportedly has a massive liquor cellar stocked with copious amounts of Johnnie Walker Scotch.

In the 1990s though the sales of Scotch dropped markedly, partly because the drink is associated with the stuffy aristocracy and suffers from an image problem. The typical scotch drinker is in his 50s and the number of young Scotch drinkers is dropping. In the mid-1980s about 40 percent of people between 24 and 35 drank Scotch in the 1990s it was estimated that only around 25 percent did

In Britain, Irish whiskey is favored among people in their late twenties and early thirties while Scotch is mainly consumed by people in their forties and fifties. At dinner parties there guests are more likely to be offered port or brandy than Scotch. Scotch distillers complain that high duties have hurt their business. Distilleries are closing and people are losing their jobs as the popularity of Scotch declines. To help boost lagging Scotch sales, the British government allows companies to advertise Scotch on television.

Ireland, according to the best documentation available, produced the world’s first whiskey. Medieval chronicles record the Irish taking grain alcohol similar to gin and passing it through charred barrels and peat smoke, dubbing the drink “uisce beatha” in Irish Gaelic. Bushmills, in Northern Ireland, is the world's oldest whiskey distillery.

Irish whiskey has a peaty, smoky flavor. Pady's whiskey cost about $2.50 a shot at a pub. Jameson is one of the most popular Irish whiskeys. The best is said to be Jameson 1780. John Powers is another popular brand.

The Irish are notorious for spiking their holy water with Irish whiskey.