VANILLA: ITS HISTORY, CULTIVATION AND PROCESSING 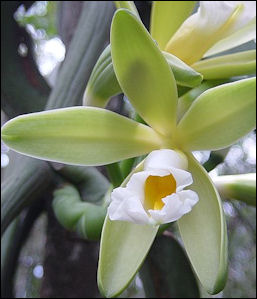 vanilla orchid Vanilla is obtained from the female sex organ of an orchid. vine and it the only edible member of the orchid family. The word vanilla is derived from the Spanish word for “vagina” or “sheath” and was inspired by the sheath-like shape of the vanilla pod. One French chef told the Washington Post, "it's the sexiest thing you can have."

More specifically vanilla comes for the ripe fruit, or pod of a climbing tropical vine with a long fleshy green stem. The pods, often erroneously called beans, are produced by yellow and orange flowers that grow in bunches and bloom at a rate of one a day for a two month period. The vanilla flavor and aroma comes from a chemical called vanillan. It is found mostly in the seeds and oily liquid surrounding the seeds in the pod.

Vanilla is the world’s most expensive spice after saffron and cardamom. The fermented fruit contains one to three percent vanillan. In some high quality vanilla pods you can be seen crystalized vanillan on the surface in the form of tiny white needles. About 130 other compounds have been identified in vanilla extract. Vanillas also contains water (35 percent), sugars (25 percent), fat (15 percent), cellulose (15 to 30 percent) and minerals (6 percent). In addition to being a used in ice cream it is also an essential ingredient for cola drinks, cakes and some perfumes.

There are 150 members of the vanilla orchid family but only two types — Bourbon and Tahitian are used commercially. Vanilla from Madagascar, Reunion and the Comoros Islands is referred to as the Bourbon type. It has an intense, balanced and somewhat dark’ flavor and aroma. Mexican vanilla (a Bourbon type) is softer and has a fresher aroma but is less valued than the Bourbon type. Tahiti vanilla comes from a different but closely related species. It has a more of a floral aroma. 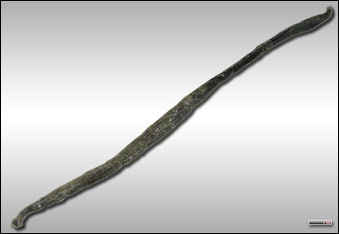 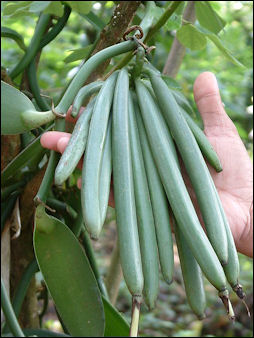 Vanilla beans The vanilla orchid originates from southeast Mexico and Guatemala, where it is pollinated by indigenous small stingless bees and hummingbirds. There are no records or references to vanilla in Mayan or Aztec literature or glyphs. The first written accounts came from Bernal Diaz, who accompanied Cortes to the New World in 1520, and Bernadino de Sahagun, a priest who came to Mexico in 1529.

The Spaniards described how Montezuma's court drank chocolate drink flavored with vanilla as well as maize, chili pepper's, pimentos, honey and other spices. The drink was so special that it was served in golden goblets which were discarded after one use. The Aztec also used vanilla to sweeten their cigars.

Vanilla orchids introduced to Europe by the Spanish conquistadors after they discovered the Aztecs using it. In Europe, initially, it was mainly used as the Aztecs used it: as an additive for chocolate drinks. Englishmen flocked to coffee houses to drink cocoa flavored with vanilla. Later it was introduced as a flavoring for a wide variety of foods as scent in perfumes, cigars and liqueurs. Queen Elizabeth I was fond of vanilla-flavored desserts. Vanilla was also used as a medicine and aphrodisiac. A 1762 a German doctor claim it to be a miracle for impotence after “curing” all 342 men of the men he treated with the problem.

For centuries vanilla was produced exclusively in Mexico as part of a monopoly controlled by the Spanish, who were the only ones who knew the secret of pollinating the orchid.. Cutting were stolen and transplanted to other parts of the world by they failed to produce pods. In 1836, growers realized that the pods failed to form because the flowers were not being pollinated. In 1841, Edmon Albius, a former slave, on the French island of Reunion perfected a way of artificially fertilizing the flower. Using a stick or sliver or bamboo he lifted the membrane of the orchid and then smeared the pollen with his thumb. In 1890, vanilla was introduced to Madagascar from Mexico.

Vanilla plant Grown tropical areas between 20̊ north and 20̊ south of the Equator, vanilla is regarded as one the world’s most time consuming and labor intensive plants. Much of the work is done by hand, which is one reason why vanilla is so expensive. It takes months for seedlings to develop. Vanilla plants need to coil around trees. They don't produce any orchid until three years after they are planted. The pods, which resemble big green beans, must remain on the vine for nine months in order to completely develop their flavor potential.

Vanilla orchids are mostly pollinated by hand using a technique similar to the one invented by Albius. In Madagascar women go around from flower to flower, fertilizing them by pressing the stamen and pistil together. Describing this, Suzanne Daley wrote in the New York Times: "Solomon Rasolomonina pushed his way through the branches, hunting for his vanilla plants. When he found one, he snapped a twig the size of a matchstick from the a nearby tree and, gently reaching into the plants blooming orchids, pollinated them."

Women can pollinate 2,500 orchids a day this way. Rasolomonina told the New York Times, "You must come out here every day at this time of year. You must get the flower in the morning, when it blooms, and before it is too old. You only have a few days."

When tips the pods begin to turn yellow they are picked by hand. In Madagascar the pods are brought by women into huge warehouses, where the beans are sorted by length. The larger beans are considered tastier and thus fetch a better price.

Vanilla thievery is common. To guard against theft vanilla growers prick their initials into in the pods. Some farmers pick the beans earlier to thwart thieves but this results in lower quality beans.

Processing vanilla is also time consuming and laborious. It takes months to cure the seeds and weeks more to extract the concentrated flavoring from the from the pods. After vanilla is harvested, the pods have mo smell or taste. Curing and processing are needed to bring out the flavor and aroma, particularly of the vanillan. Until fairly recent the curing process was quite complicated. The beans were first wrapped and subjected to high temperatures and humidity to “kill” the vegetative life. Next they were alternately dried in the sun in the day and sweated in the night for several days.

These days, vanilla producers are able to skip the above steps by throwing the pods into boiling water for a precise length of time. At this point the beans are dark, oily and pliable. Next, they are dried on bamboo tables in the sun for around ten weeks until they have shrunk to about 20 percent of their original size. After this the pods may be sorted again for size and quality. Then they are stored away for a month or two more until they reach their peak flavor and fragrance.

Cured vanilla is very dark brown, slender, pleated and about eight inches long. High quality pods can be sliced open and the goo that oozes out is almost pure vanilla. Most of the vanilla pods grown in Madagascar are wrapped in bundles and exported, mostly to the United States and Europe, where they may be processed further. After vanilla has been cured and dried, it can be stored for 10 years or even more if it is periodically dried to prevent the growing of mold. When prices are low, vanilla is stored away in hope that price will rise.

European often eat the pods (beans), which are tough but impart a strong, pure vanilla flavor, The French like to cut up the pods and put them on desserts. Americans prefer vanilla extract, which is made by percolating alcohol and water through chopped, cured beans, a method not unlike making coffee. The process can take weeks. Vanilla extract is strong stuff. Generally a few drops is enough for most recipes. 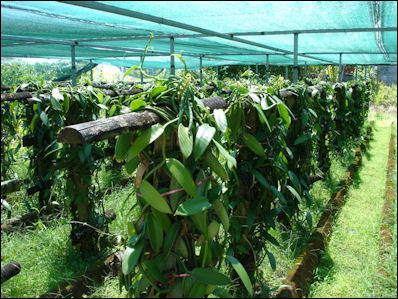 Vanilla industry has been hurt by chemical substitutes. About 97 percent of vanilla used as a flavor and fragrance is synthetic. Vanillan is a component of some trees and can easily be produced from wood wastes in the paper industry. Pure vanillan has a scent reminiscent of vanilla but it lacks the flavor of the true spice. Other ingredients — including clove oil and coal tar from tonka beans — are added to make it more vanillay. Substances called “vanilla flavor” contain no vanilla at all.

Only about 2,200 tons of vanilla beans are produced annually. In 2004, vanilla was selling for about $275 a pound. In 1997 it was fetching only $10 a pound. At that time many vanilla farmers switched to bananas, breadfruit, coconut and sugar cane. Even with vanilla at $10 a pound, they brought in less money than vanilla but were much easier to produce

The vanilla industry is highly secretive. Companies send their representatives traveling private aircraft under false names to remote locations to get an edge on their competitors. They carry suitcases full of cash and purchase vanilla stored form warehouses surrounded by razor wire and watched over by armed guards. Extortion, fraud and even murder are all elements of the trade.

The dairy industry not surprisingly is major consumer of vanilla. It is used as a flavoring for ice cream, yogurt and other dairy products. It is also used in a variety of industries for things like flavoring medicines and concealing the strong smell of rubber tires, paint and cleaning products.

Madagascar remain the world’s largest producer of vanilla. Vanilla produced the Comoros Islands and Reunion near Madagascar is often referred to as Madagascar vanilla.

The main vanilla exporters in Madagascar are centered around Antlaha, a town on the northeast coast. In the early 1970s, Madagascar supplied 70 percent of the world's vanilla. By the early 1990s, it share had been reduced to 40 percent.

The Vanilla industry in Madagascar has been hurt by foreign competition, chemical substitutes and government pricing fixing, regulation and high taxes. The government claimed 80 percent of vanilla profits and kept the prices so high for so long that vanilla producers in other countries were able to reduce Madagascar's market share. 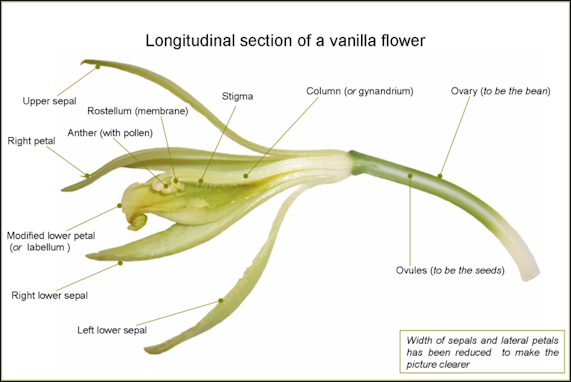