SUGAR: ITS HISTORY, CULTIVATION AND SOURCES

sugar Sucrose, the white sugar that humans eat, is the most widely used sweetener in the world and the most important export product for many countries. Sugar has only been used in Europe and the Americas in the last 400 years. Before that people relied on honey and things like date syrup as sweeteners.

Sugars come in many types. They are made in all green plants by photosynthesis and are an essential nutrient for keeping a plant alive and ensuring growth. Sugars can be extracted from a variety of plants, such as palms, grapes, melons and sugar maples. Sugar cane and sugar beets have the greatest quantities of sugar and are commercially exploited. The sucrose found in them is identical.

Sugar is best viewed as a spice rather a food. Not only is it a great sweetener — bursting in the mouth with flavor and dissipates quickly, leaving a minimal aftertaste — it is also a very versatile product ideal for all types of cooking and food processing. It can be cooked, candied, caramelized and frozen. It is used to bulk up baked goods and helps them turn brown and is an essential ingredient for many recipes.

Sugar has few health benefits other than being a source of energy. It has few vitamins or minerals and is linked with a number of health problems; namely tooth decay and diabetes. Sugar has been blamed for causing hyperactivity in children and has been studied as an additive substance. But some feel that sugar has gotten a bad rap. There is no direct evidence linking sugar to obesity or other chronic diseases. In the United States, the sugar industry runs adds that a teaspoon of sugar has only 30 calories.

Humans have a great fondness for sweetness. Cats and dogs don’t taste sugar nor can fish, hedgehogs, kangaroos and tree shrews. Humans are thought to have developed the taste from centuries of climbing trees and extracting honey from bee nests. What prompted them to first do that is not known.

growing sugar cane Sugar is thought to have originated from a perennial grass native to Southeast Asia or the South Pacific. Sugar was domesticated in New Guinea as far back as 12,000 years ago and was used by people in India as far back as 800 B.C. In the Atharvada, a sacred Hindu text, a king made a crown from sugar crystals.

Sugar didn't arrive in Europe until the late Middle Ages. It was introduced by Arabs from Spain. For centuries it remained an exotic luxury beyond the reach of most Europeans. The Arabs obtained it from India. “ Sugar” is an Arabic word. Sugar cane originated in the Canary Islands. It was carried to the Americas in 1493 by Columbus. Sugar, molasses and rum production in the Caribbean was an important source of income for the Spaniards. Unfortunately it relied on slaves.

By 1700s the Americas had become a vast plantation supplying Europe’s insatiable appetite for sugar. This appetite only grew with time Consumption in England rose from four pounds per person a year in 1700 to 18 pounds in 1800 to 90 pounds in 1900.

Sugar cane is the still the major sugar export crop even though production has steadily declined since 1967. It has been replaced of sugar beets.

Sugar cane, a member of the grass family, is a long stalk that looks like bamboo. The sugar is stored in the stalks. It grows best in tropical climates and is one of the cheapest foods in Africa and Southeast Asia. A five-foot-long stalks can be purchased for about ten cents and it contains enough sweetness to keep one going for about half a day.

harvested sugar caneThe purple outer covering of sugar cane should not be consumed it should be peeled off with a knife or ripped off with the teeth. You don't eat sugar cane but chew it and suck in the juices. The stalks are simply too fibrous to eat. Delicious brown sugar cane juice is made by squeezing the sugar stalks with a press. People that chew a lot sugar cane and don't receive any dental care often end up with rotted teeth.

In Southeast Asia, sugar cane is split and used as skewers for kebabs made from shrimp or seasoned pork or beef. In the Caribbean it is the preferred material for swizzle sticks in rum-based cocktails such as the “mojito” or planter’s punch.

Thin, heavy canes tend to sweeter than thicker ones. Those with joins every three to five inches are the easiest to eat by hand. When choosing sugar cane, pick stalks that are light green fading to yellow mottled with reddish-brown patches. Avoid white canes and those with cracks and blackened areas. To check quality have a fresh cut made in the cane. Quality cane has an opaque, off-white, moist flesh. Flesh that is dry and brown or red indicate the cane is past its prime. For the best flavor, consume the cane immediately after you purchase it.

Sugar cane is a grass. It grows very fast. Growers can get seven harvests before replanting.

Sugar cane is not grown from seeds but from a stalk, each containing an "eye" or bud. These sections are placed end to end in furrows. A week or more after the planting, the first sprouts begin to open. The stalks grow closely spaced together. Sugar cane can take nine months to two years to mature but generally ready to harvest after about a year.

Sugar cane is a water thirsty crop and traditionally has been grown as commercial operation requiring seasonal labor. Few farmers raise it as a garden crop and food source. It has a history of being grown on plantations owned by wealthy landowners and worked by poor peasants. On Caribbean scholar suggested that “sugar production: created “repeating islands” of similar food, social structures, and housing that came unto existence whether the community was ruled by English, French, Spanish or local people.

Sugar is not an environmentally-friendly crop. It degrades soils, causes air and water pollution when fields are burned, and contributes to deforestation and deprives wildlife of habitats. It is hard to call biofuel made from sugar a clean fuel because of how dirty and damaging sugar harvesting and processing can be.

Sugar cane load Mature cane is generally between four and ten feet tall when it is harvested. Harvesting is labor intensive and still largely done by hand in developing countries. At harvest time the cane is cut off at the ground with a long machete-like knives or long wooden-handled metal cutters. Sometimes leaves are burned off and roots are dug up with a hoe to make cutting easier. The cane is stripped off the leaves, chopped into manageable pieces and piled in stacks.

To kill snakes, clear unwanted foliage and make the cane easer to cut by hand, the fields are usually burned before harvesting, filling the air with smoke soot and releasing methane and nitrous oxide, two potent greenhouse gases. When the harvest is over the fields are sometimes torched again to leave fertilizing ash. The burn off produces a smell sort of like burnt molasses and fills the air with ash. “A burned cane field," wrote journalist Alan Berlow, "looks like an endless prison of blackened upright bar, each oozing a thick viscous gum and covered with a fine silken ash."

Cutting cane by hand is tough, hot, dirty and back-breaking work. Cutters sometimes die of exhaustion and heat stroke. Cane cutters in Brazil earn about $250 a week, harvesting about ten tons a day. The pay is often considered relatively high. In other places cutters can earn as little as $3 a day.

One of the biggest problems for cane cutters is poisonous snakes. They are driven out by the fires. Most cane cutters wear long pants and boots. Some cutting teams have one guy with a machete whose job it is to kill snakes. He often whack them and throws them into the fire for good measure. 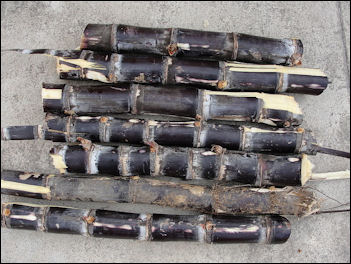 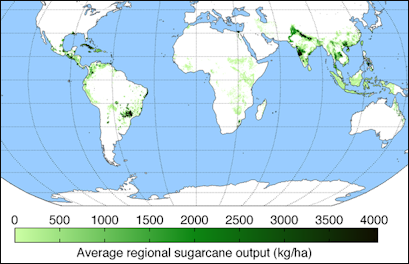 Sugar beets come from a plant that resembles a turnip, large radish or carrot. It grows best in temperate climates. The sugar is stored in a tapering, white root. The average sugar beet weighs two pounds and produces 14 teaspoons of sugar.

The sugar beet industry began in Europe in 1747 when one Andreas Marggraf discovered the wild sugar beet and 40 years later one of his students, Franz Karl Acgard, discovered how to extract sugar from it. Beet sugar was first produced commercially in 1802 in Germany and expanded under Napoleon.

Sugar beets require a lot of water and take about seven months to mature. During the harvest season, the beets are pulled from the soil. The tops are cut off to later be used as fodder. The beets are taken to factories for processing. At the factory, the beets are washed and cut into strips, which are placed in tanks with hot water. The sugar is soaked out and the resulting juice is purified, filtered and concentrated through a series of processes. The resulting product is the same granulated white sugar that comes from a sugar cane factory.