Indian pepper Pepper is the world's most commonly used spice. It accounts for 60 percent of the spice trade and comes from the dried berry (peppercorn) of the “Piper nigrum” , a climbing vine that originated in the tropical forests of the Malabar coast of the southwestern India and was introduced from there to other tropical places.

Pepper is regarded as a flavor enhancer and digestive aid. Much of the flavor comes from iperine, a chemical concentrated in the black skin. One food writer with the New York Times said that “with salt life would impossible. Without pepper, it would be impossibly dull.”

The Malabar Coast of India and the islands of Indonesia have traditionally been the sources of peppercorns for pepper. The best pepper is said to come extra large peppercorns named after Tellicherry on the Arabian Sea.

Black pepper comes from peppercorns. It is used as a seasoning and belongs to the “Piper” genus. Hot peppers belong to the “Capsicum” genus. The two are unrelated an the confusion over their names can be traced to Columbus (also the sources of the confusion of American Indians and Indians from Indian) who called the New World Capsicums peppers because he believed he was in the spice growing region of India. [Source: Jim Robbins, Smithsonian]

Other non-capsicum flavorings also referred to as peppers are pink peppercorns, Sichuan pepper from China and malegueta peppers from Brazil and Africa.

Hot peppers and bell peppers belong to the “ Capsicum” genus. They originate from the New World but now are found almost everywhere. There are dozens of different kinds of peppers and they come in all shapes and colors, from purple to orange to deep red.

Peppers are the podlike fruits of leafy plants that grows two to four feet high and have white flowers. Botanists can't make up their mind whether they are a fruit or berry. No matter what color they are when they ripen all peppers come from pods that are green before they ripen. 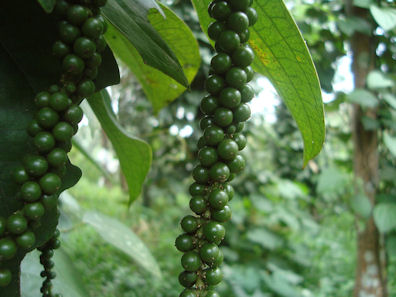 Pepper before ripening Pepper needs a warm climate and lot of water. It grows best in tropical areas with high rainfall and thrives particularly well on the Malabar coast in southwest India which receive rain from two monsoons and is covered with hills that provide good drainage.

There is really no such thing as a pepper plantation. The vines are often grown on trees in backyard gardens, tea plantations of jungle-like plots among other plants such as vanilla orchid vines, tea bushes, nutmeg trees, coconut palms, betel nut trees and coffee bushes. Pepper grows best on tall poles or other supports or the straight trunks of trees such as palms or silver oaks which are sometimes used as windbreaks.

Pepper vines have ribbed, leathery, dark green leaves. They reach a height of 12 to 15 feet. The flowers bloom after the rains It takes seven or eight years for a vine to reach maturity although berries appear two or three years after planting.

The berries emerge yellow, turn green and hang in clusters like red currants when they are ready to be harvested. Workers climb pyramid-shaped or one-legged ladders and pick the berries by hand and place them in sacks attached to their belts.

Peppercorns are dried in the sun for five or six days. They are set down on any flat surface, including roofs, courtyards and roadsides. As they dry the berries, shrivel, harden and turn black.

For black pepper the berries are harvesting when they are beginning to turn red and still are unripe. After they dry into hard, black, shriveled peppercorns, workers break them open with spikes or by hand and thresh them with sticks or with barefeet.

White pepper comes from ripe berries that have been left on the vine until the outer husk has separated from the white center. They are soaked in water. The hulls are rubbed off or ground off with a machine. The light colored kernels are then dried in the sun. Because much of the pungent flavor of pepper comes from the black skin, white pepper as a milder flavor than black pepper.

Pepper processing is relatively simple. A series of machine wash and dry the peppercorns and remove stems, stones, sticks, foreign matter, hollow berries and undeveloped buds. Sometimes the peppercorns are sorted by size and steam-sterilized before passing through a dryer that reduces the moisture contents from 30 percent to the allowable 10 or 11 percent. The smell of pepper in a pepper plant is less than one would think.

Most of the world’s pepper is produced by small farmers, who sell their crops to middlemen or traders who in turn sell it to processors. One of the nice things about pepper is that once it has been properly dried it more or less keeps forever. Unsold pepper is stored in warehouses, and is brought out periodically and dried so mold doesn’t grows. Some producers store it until the prices rise.

Salt and Pepper in Ancient Rome

Wealthy Romans sometimes ate their food with elaborate sauces and spices. They called this “city eating." By the 1st century B.C., Romans were obtaining spices from India.

pepper in colonial Indonesia"The best Roman cookbooks required pepper for nearly every recipe." In the A.D. first century, the satirist Persius wrote:
The greedy merchants, led by lucre, run
To the parch'd Indies and the rising sun
From thence hot Pepper and rich Drugs they bear.
Bart'ring for Spices their Italian ware...

Salt was very valuable to the ancients. Both the Greeks and Romans salted their sacrifices before their throats were cut. The Roman empire's major highway was the Via Salaria (Salt Road), on which salt was carried from the salt pans of Ostia to Rome. The expression "worth their salt" comes from Rome where soldiers were paid a salarium (salary) to buy salt.

A number of other words come from salt. The word salad is derived from the fact that Romans liked to salt with their vegetables. Salacious comes from the Latin word salax, which means a man in love or literally “in the salted state.”

Salt from the Dead Sea was shipped all over the Mediterranean. Meat was preserved by "salting," a process that require large quantities of pepper in addition to salt to counteract the "unpalatable effects of the salt itself."