GREEN, HAWKSBILL AND LOGGERHEAD TURTLES AND OTHER SEA TURTLES 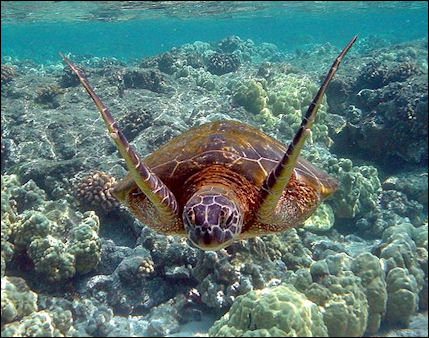 Green turtle The are eight species of sea turtle. 1) The leatherback turtle is the world's largest turtle. It is found worldwide. 2) The olive ridley is the smallest and most abundant sea turtle. 3)The Kemp's ridley stays close to shore in the in the Gulf of Mexico and the North American Atlantic. 4) The loggerhead is found in the world's subtropics. 5) The hawkbill turtle hangs out around coral reefs. 6) The green turtle is found mostly around grassy estuaries. 7) The Pacific black turtle inhabits the tropical waters west of Latin America. 8) The Australian flatback is found in Indian and west Pacific oceans. 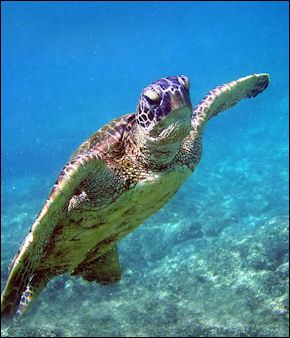 Green turtle Green turtles can weigh up to 200 kilograms and reach a meter in length. They can stay underwater or 30 minutes and travel 2,000 kilometers from its feeding grounds to its nesting sites. A critter cam hooked up to one in 2007 by National Geographic researchers showed that they were omnivores rather than vegetarians as had been previously thought.

The green turtle is found mostly around grassy estuaries. There are relatively large populations of them. Some places have noted increases of them in recent years. Adults routinely live to be older than 50 or 60 . Some are believed to live past the age of 100.

Green turtles mate at sea. Nesting females arrived that beaches where they first dig a few holes to fool predators and then lay eggs after sunset. They dig holes with their hind legs, lay between 80 and 120 eggs at a time and cover the eggs with sand to protect them from predators. Green turtle eggs bounce like ping pong balls. The eggs incubate for 50 days to three months, with the gender of each baby determined by the temperature of the sand. The babies weigh just a few grams at birth.

Ras Al Hadd is a nesting site for green turtles in Oman on the easternmost point of the Arabian peninsula. The turtles usually arrive around midnight. Judith Miller wrote in the New York Times: “One giant turtle after another inches her way out of water...The turtles dig their holes, and sometimes abandoned a half-dug hole only to dig another a few yards away. The mother turtles sighed and groaned as they began laying their eggs, one by one...About 45 minutes later, the weary turtles, with great difficulty, heave themselves out of the deep trenches, covered the holes with sand, and inched their back to the sea... Baby turtles emerge from eggs in about 50 days. Tourists are on hand to watch the spectacle. Flashlights and flashbulb are forbidden while the turtles come ashore. But once they start laying their eggs lights do not seem to bother them.


green turtles Green turtles are hunted for meat. Simply turning them over makes them helpless. Their meat is said to be the best tasting of all the sea turtle meat. This might have something to do with the fact they eat mostly grass. Sea turtle researcher Archie Carr said, they are “so easy to catch, and comes back to the same place over and over again.”

Green turtles are greatly prized as delicacies in Bali, where they are served up celebrations, banquets, weddings and special holidays. Because the Balinese have so many celebrations that can add up to a lot turtles. Balinese say the meat of young turtles in the best. The meat is often ground up and mixed with pepper and other spices and made into satay. The Balinese love of turtle meat has been described as cultural and is somewhat similar to the Japanese love of whale meat,

More endangered turtles are killed in Bali than anywhere else in the world. Each year hunters catch and kill 15,000 to 20,000 turtles a year. Most of those caught are green turtles even though a law against catching them was passed in 1999. The turtles have also been threatened by the construction of hotels and resorts on the beaches where the turtles lay their eggs. [Source: Los Angeles Times]

hawksbill turtle The turtles are killed in slaughterhouses, where they are lined up with their flippers tied together so they can no not crawl away. They are cut apart while still alive to make the meat easier to extract from the shells. If the turtles are killed outright the meat sticks to the shells. In most cases the turtles live for about 10 minutes while the flippers are cut off, the chest is cut open and the internal organs are removed. When the heart is taken out it is still beating. One former turtle hunter told the Los Angeles Times, “It’s torture to the sea turtles because they didn’t die right away, even after we have cut them. It’s like killing a human. The sea turtle can cry. Maybe if it could speak, it would ask for mercy.”

The turtle hunters are based mostly in the fishing village of Tanjung Benoa on the southern end of Bali. The hunters often remain at sea of two months and search as far away as Sulawesi and Borneo for turtles. The hunters used nets to catch turtles when they surface for air or shoot them with spears and spears connected to buoys that tire the turtles and it make it possible to pull them aboard the boat. The turtle hunters a well organized. Most are Muslims and Christians not Hindu like most Balinese. The take advantage of loopholes in the laws to catch thousands of turtles and have burnt down the station of police that dared to try and stop them. 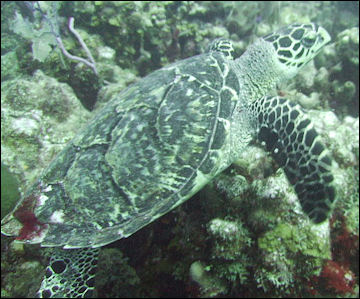 Hawksbill sea turtle Hawksbill turtles are frequently seen by divers and snorkelers. They cruise around reefs, grazing on sponges and other plant life, but stay close to the reef in case they need to make a quick escape from a predator such as a shark.

Hawksbill turtles have traditionally been hunted for their shells: a source of some of the most beautiful tortoise shell. The shells of many hawksbill turtles ended up in Japan, where the shells are carved into hair decorations traditionally worn by Japanese brides on their wedding day. At one point Japan reportedly imported 31,000 shells a year, paying an average of $375 a shell. Under U.S. pressure Japan agreed to stop importing the shells in 1992.

Warm water and sand during the middle third of the incubation period of hawksbill turtle eggs causes the eggs to yield more females. These days more females are being produced. Global warming is blamed for causing warmer temperatures and producing storms that clear away trees that normally provide beach cover to keep the eggs cool.

Loggerhead turtles can weigh up to 230 kilograms. 500 pounds. They generally live in depths of 9 to 22 meters but sometimes dive over 230 meters to regulate their body temperatures. Some loggerhead turtles are over 100 years old.


Loggerhead turtle Loggerhead turtles are generally not aggressive but the powerful beak can inflict a crushing bite. A fisherman in the Caribbean was crippled when one bit him in the knee. Loggerheads are also sometimes attracted to blonds with bikinis and feed on Portuguese man-o-war jellyfish. A critter cam was hooked up to a one in 1987 by National Geographic researchers.

The loggerhead is found in the world's subtropical seas. Based on counts of turtles at nesting sites, their populations dropped by half between 1990 and 2000. In Mexico tens of thousands of loggerheads have been illegally caught for food.

Some Pacific loggerhead turtles migrate great distances. Turtles born on Yakushima Island in southern Japan have been tagged and tracked making their way across the Pacific to Baja California in a two to six month period following the "plankton trail" between cold and warm water, feeding on jellyfish. Some of the Japan-born turtles spend most of the life off the west coast of Mexico and California. When they reach sexual maturity between 14 and 20 years of age they swim the 12,000 kilometers distance across the Pacific back to Japan to nest, and repeat the journey every other year..

Loggerhead turtles take 14 to 20 years to reach reproductive maturity. Only one in every 5,000 loggerhead eggs produces a turtle that reaches reproductive age. Many are taken by predators waiting for them to hatch on the beach. Those that make it to the sea are often taken by aquatic predators and fishing nets. Egg-laying females get easily spooked and confused by lights when they are searching for nesting sites.

At nesting sites loggerhead females dig two-foot-deep holes, deposit their eggs and cover them and head back to the Two months later 100 or so hatchlings hatch during the full moon and climb up through the sand make their way to the sea. The hatchlings that survive swim out to sea less than 20 hours after hatching. Some scientist believe they sense the earth's magnetism when the move across the sand and develop an instinct for direction that helps them later to find their way back to their birthplace later on.

The olive ridley sea turtle inhabits tropical regions of the Pacific, Indian and Atlantic oceans. The turtles live in the Atlantic, Pacific and Indian Oceans. Once the most abundant of all sea turtles their numbers are thought declining. The estimated adult population in Mexico is 120,000.

In Texas olive ridley sea turtles come ashore in April. Each female digs a 30 centimeters deep hole in the sand, deposits about 100 eggs, covers them and returns to the sea. During the “arriba” at the Ostional nesting site in Mexico thousands of females come ashore and lay an estimated that 20 to 30 million eggs. Even without human interference only four to eight percent hatch. 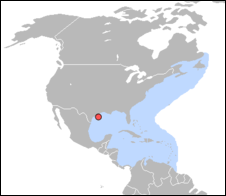 range of Kemp's ridley turtles In the 1960s and 70s the number of olive ridley sea turtles was dramatically reduced by fishing nets and poaching. Thire numbers are increasing off the U.S. as a result is hatchling projects like this at North Padre Island, Texas. To save the turtles in Mexico environmentalist are promoting legally managed harvesting of the eggs. The plan is get legal eggs to the market at a cheap enough prices that poaching is not an economically viable alternative.

The Kemp's ridley stays close to shore in the in the Gulf of Mexico and the North American Atlantic. The number of female Kemp ridley turtles that nested neat Rancho Nuevo, Mexico declined from 40,000 in 1940s, to 10,000 in 1960 to a round 500 in the 1980s. There making a come back in Texas. Every few days newly hatched Kemp’s Ridley turtles are released into the surf at North Padre Island. A record 10,596 hatchling were released there in 2007.