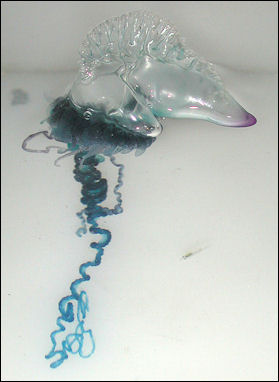 Portuguese Man-of-War By some estimates there are 200 species of jellyfish. They range in size from tiny transparent hydromedusae. a few millimeters across, to giant red-and-purple deep sea varieties, that reach 6-feet-across and have 100-foot-long tentacles. They live in almost every ocean habitat: in tropical reefs, under polar icecaps and in ocean trenches. Many jellyfish produce bioluminescence (See bioluminescence).

Jellyfish with a fringed dome with stinging tentacles are called a medusas. They are named after a woman from a Greek myth who was loved by Poseidon, the God of the Sea, and for this was changed by a jealous goddess into a beast with snakes for hair.

Some hydrozoans are mistaken for jellyfish. They are colonies of polyps that often have an attached polyps stage and free-swimming medusa stage. Some are exist as medusae their entire lives. The Portuguese man-of-war is one of these.

The Portuguese man-of-war is comprised of chains of polyps that hang from a gas-filled float. Each chain has a specialized function: one tends to reproduction; another specializes in stinging prey; and another absorbs nutrients from the prey. The chains form tentacles, which can extend for more than 20 meters. The Portuguese man-of-war packs a very potent and toxic poison. Humans that are stung usually feel excruciating pain but do not die.

The man-fo-war fish is a small fish that hangs around Portuguese man-of-wars when it is a juvenile for protection and scraps of food in the same way that clownfish hang out at sea anemones. Strangely enough though it has only limited immunity to the jellyfish’s sting and instead relies in its swimming dexterity to avoid being stung, It also occasionally feeds on jellyfish tentacles which makes it more of parasite than a benign creature involved in a symbiotic relationship.. When the fish becomes an adult it leaves the Portuguese man-of-war and heads for deeper waters. 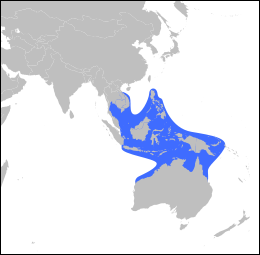 box jellyfish range The box jellyfish — which is found off the north and northeast coast of Australia and for the most part no where else — is arguably the world’s most venomous creature. Victims sometimes die within three minutes and over 80 people have died from their stings off of Queensland alone since 1880. What makes them particularly dangerous is the fact that their translucent box-shaped bodies and 60 spaghetti-like tentacles are difficult to see. They are also known as marine stingers or sea wasps. [Source: William Hamner, National Geographic August 1994]

Very little is known about box jellyfish. Scientists have traditionally observed them underneath piers feeding on fish attracted to light, and no one had ever kept one alive in captivity until 1977. Now scientists studying keep them in disk-shaped aquariums with circulating in a current that is similar to natural conditions.

Strangely enough the box jellyfish was not even identified until 1956. Before that time there were reports of swimmers leaping out of the water in agony not having any idea what caused the stringy red welts and the inferno of pain.


box jellyfish Box jellyfish live for only a couple of months. They feed on small fish and shrimp and can double in size in one month. They travel at speeds of up to five feet per second in their quest for prey. And even though the don't have any eyes or a brain they can "see." Box jellyfish have 24 eyes clusters on each corner of its box shape, giving it 360 degree vision both horizontally and vertically.

During the later summer, or when stressed, box jellyfish release sperm and eggs into the water. As is true with other species of jellyfish, the fertilized eggs multiply into "balls of cells" called planulae that settle onto a hard surface like a rock and then grow into a polyp. The polyp reproduces asexually into several creeping polyps which later metamorphose into adult jellyfish (called medusas) in a 12-day period. These migrate out to sea before the early summer monsoon rains starts and return in large numbers to river mouths and estuaries when they are ready to spawn.

Judging from the fact that small medusas were found close to shore, scientist surmised that box jellyfish spawned in coastal areas and estuaries. To prove this Australian biologist Robert Hartwick spent six years looking at rocks and mollusks shells from estuary streams for box jellyfish polyps. "We looked at thousands of rocks from 14 rivers," he told National Geographic, "sometimes taking as long as four hours to examine a four-inch rock...It was like searching for a small shrub in a forest." Finally in 1986 he thought he found one. "I tried not get too excited. Polyps often look alike. We had to see what it grew into." After 12 days "the medusa emerged, and they were unquestionably tiny box jellies."

Box jellyfish tentacles are 15 feet long and a quarter inch thick. A single tentacle contains millions of venom capsules that fire with a mechanical trigger stimulated by chemicals on the surface of a fish, shellfish and "unfortunate humans." Box jellyfish need a venom this powerful. The shrimp and fish they eat are killed almost instantly. If the they weren’t they could easily tear the jelly's fragile tissue. Some species of animals are not affected by the venom. Hawksbill turtles, for instance, gobble up box jellies like their was no tomorrow and inside the stomachs of some sea turtles have been found the remnants of dozens of jellyfish. Sea turtles have also been found with pounds of sharp silicone spicules from glass sponges.

The venom in a box jellyfish is powerful enough to kill a human in four minutes of less. "Australia most dangerous snake, the taipan," UCLA biologist William Hamner wrote in National Geographic, "has enough venom to kill 30 adults, but its bite is not very painful, and it can take several hours for untreated victim to die. A large box jellyfish, however, has enough venom to kill 60 adults, and the pain of its sting is instant and unbearable. Breathing may quickly become distressed as venom is absorbed into the circulatory and lymphatic systems; in some cases, the heart's pumping slows or stop almost immediately." 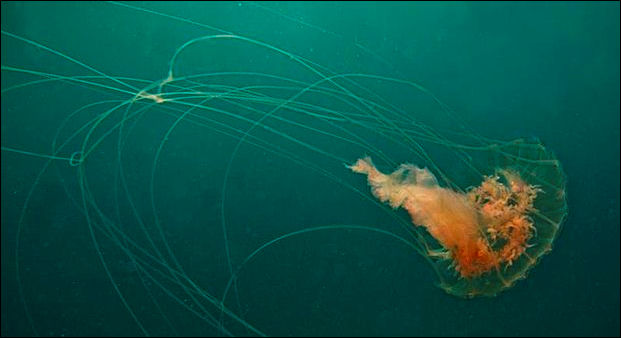 Box jellyfish venom causes very rapid onset of circulatory problems. It has a high mortality rate because toxic reaction spreads very quickly throughout the body. In January 1992 a Cairns man spent two nights in the hospital after being stung on the neck, chest and back. The man, a local newspaper reported, was swimming a 150 meters north of a stinger resistant enclosure and was pulled out of the water by friends. Lifeguards "dowsed" him with vinegar. "Ambulance officers treated the man with pressure bandages," the report said, "and although he was heavily sedated with painkillers...he was screaming and writhing in agony."

Once while Hamner was carrying buckets with box jellyfish to his a truck, a breeze blew a single tentacle against some exposed skin on his arm. "I felt as if I had been branded by red-hot steel," he said. "My first instinct was to claw at my skin but I knew that dropping the bucket would be too dangerous. Wincing with pain, I managed to lift the bucket onto the truck. Then I examined the damage: a fiery welt, braided with characteristic bands of the box jelly's tentacle.”

"I was lucky," he continued. "Only about an inch of tentacle had stuck to my arm. It takes ten feet or more to deliver a fatal dose of box jelly venom. An inch was enough for me. A hundred that level of pain was unimaginable.” National Geographic showed some horrible photographs of sting victims from the Queensland Life Saving Manual. One was a little girl with nasty strings of welts on her torso and another was a child with scars that looked like thick concentration of varicose veins. Although both victims survived they were scared for life. 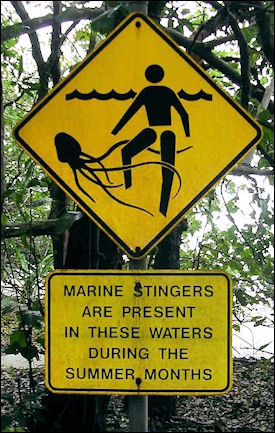 Box jellyfish warning
sign in Australia From October to May box jellyfish can be found on the northern and northeast coast of Australia, as far east as Rockhampton behind the Great Barrier Reef, and as far west Broom. During the summer one doctor said: "it is quite unsafe to swim the ocean in tropical northern Australia." Fortunately for the Australian scuba diving industry, box jellyfish are not found around the Great Barrier Reef. They prefer the extremely warm and placid water found in northern Australia during the summer.

Precautions against box jellyfish include staying out of the water, swimming inside stinger nets in "swimmer resistant" areas , wearing protective clothing such as pantyhose and tight fitting shirts. Surfers wear pantyhose on both their legs and arms to protect themselves from box jellyfish stings. Scientist put on long pants, long-sleeve shirts and gloves taped to their wrists when handling buckets of jellyfish on land. Lifesaver warn swimmers to wear lycra, but neoprene scuba diving outfits are not necessary. The reason for this is that box jellyfish have short singer capsules are too short to puncture skin covered by a thin layer of clothing.

In the case of a severe box jellyfish sting, signs in northern Australia advise: 1) flood the sting area with vinegar; 2) give artificial respiration if breathing stops; and 3) give closed chest massage if the heart stops. For minor stings one should flood the sting area with vinegar and then apply a soothing cream or lotion. Health advisories say: if stung immediately pour at least two liters if vinegar over the adhering tentacles to deactivate the stinging cells. This does not reduce the pain. Do not rub the victim's skin, keep them immobile and use artificial respiration until medical assistance can be obtained.

There is an antivenin for box jellyfish. It was developed in the 1970s by injecting a small amounts of venom into sheep who then in turn produced antibodies with anti-venom. "It can be very effective," says one doctor, "Normally breathing often begins almost immediately, and pain relief usually occurs within minutes. Later scarring is frequently reduced." 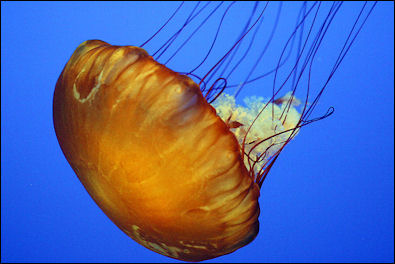 If you get stung by a jellyfish some people recommend applying meat tenderizer, vinegar or even urine to relieve the sting. According to the Medicine Man on HealthExpertAdivce.com, “The theory of urinating on a sting is that the urine contains some ammonia which helps with the stinging. Ideally vinegar is what you'd want to use, though unseasoned meat tenderizer, baking soda, or one-quarter-strength household ammonia can be used. Never wash the sting with fresh water. Use salt water if nothing else as fresh water may release more venom. Taking Benadryl, along with using an ice pack and treating the sting with bacitracin afterwards for about 3 days is what you'd ultimately want to wind up doing.”

According to stupidquestion.net: Susan Scott, “Oceanwatch” columnist for the Honolulu Star-Bulletin, has investigated jellyfish stings in the field (as well as in the lab) probably as much as anyone, having spent years visiting injured tourists and the like on Hawaii’s beaches. A registered nurse, she and husband Dr. Craig Thomas authored “All Stings Considered: First Aid and Medical Treatment of Hawaii’s Marine Injuries.” In her column in 2001, Scott summed up years of study on a variety of sting “cures”: “Nothing worked.” In an e-mail to me, she summed it up another way: “Anything works.” This paradox goes to the heart of the urine myth. “Nothing worked” means that none of the main folk remedies — including urine, meat tenderizer and commercial sprays — did anything to stop the pain of a sting. On the other hand, “Anything works,” because the vast majority of jellyfish stings are not severe and their effects disappear within a few hours at most, no matter whether you urinate on yourself or simply do nothing.