In the shallow reef as many 100 different species of fish may be found in one area. Tracking reef fish with transmitters implanted in the fish’s body indicates that the fish rarely venture outside their protected reef home.

Reef fish basically fall into two categories: 1) those that on algae and other food created by the reef; and 2) predators that feed on the aforementioned fish. Many species of reef fish such as surgeonfish and angelfish feed on algae in the coral and vigorously defend their territories against any intruders.┭

There are dozens of kinds of parrotfish and butterflyfish and other fish that look similar except they have different color patterns and other slight differences. Why is there such diversity for reason that don’t seem to offer an advantages? Marine ecologist David Bellwood, "The answer is that we really don't know. But I can tell you a lot of diversity within groups of tropical fish is a matter of historical accident. It may be that sea levels fell during the ice ages, ocean basins became isolated, and their populations evolved along separate lines, which we now regard as separate species. Later when the sea levels rose again, many migrated...and took up residence side by side."

Many reef creatures have symbiotic relationships with other creatures in the reef community. Nearly-blind cleaner shrimp hang out with certain gobies and act as the "seeing eye" fish. Cardinalfish live with conches inside their shell and perform cleaning duties. Some sea anemones play host to several species of shrimp, each with a different role, as well as clownfish. As many as 16,000 small shrimps may live in a single wash-tub size loggerhead sponge.


parrotfish Many of the world's coral have been depleted of large fish by overfishing. In the 1960's uneatable reef fish were hunted with spear guns explosive charges simply for the sport of it. 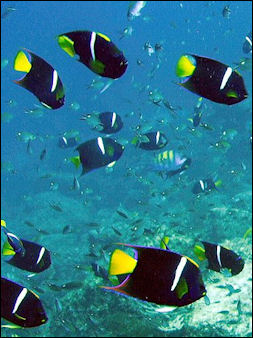 Reef fish and reef creatures often are brightly colored and have striking patterns that include bold stripes of contrasting color, chevrons of black and white, patches of color surrounded by a halo of another color. Even creatures that can not see themselves use color to suit their purposes. A small parasite that infects coral in Indonesia produced pink patches that attract fish. The fish feed on the pink patches and infect the fish who in turn spreads the parasite to other corals. When many kinds of reef fish are taken out of the water their dazzling colors turn quickly to grey.[Source: Les Kaufman, National Geographic, May 2005]

Reef colors are especially bright when photographed with a strobe, which is what underwater photographers often use. When the light is turned off, especially tens of meters under the water, the reef is more of world of pale blues and greens and mottled yellows not bright red and orange. At the surface colors may look bright and distinct but as one goes deeper the world become bluer and bluer. [Ibid]

As one goes deeper into the water red colors tend to disappear the quickest because they are absorbed by water molecules, plankton and debris. To underwater animal reds may appear gray or black. It is not even clear why red exists in the underwater world. Blues and yellow blend in well in the pale blue world. The bright yellows and blues that light up angelfish and damselfish that appear so beautiful to humans provide useful camouflage in the blue world. [Ibid]

Other reef creatures use camouflage to stay clear of predators and catch prey. Cockatoo waspfish resemble dead leaves and trumpetfish look a drifting plant. Frog fish and scorpionfish pose as algae-covered rocks and seaweed and pounce an unsuspecting fish that wander their way. The sheer complexity of the reef produces its own camouflage. As a fish swims against the reef’s complex background predators have difficulty making out the details, outlines and contrasting colors of the fish especially as it retreats towards the reef where distance and motion add to the confusion.


lionfish The bright colors of reef fish, serve several purposes: 1) to provide camouflage amongst the bright colored reef; 2) to confuse predators and prey; 3) to define territories; 4) to attract mates; 5) to warn predators of a foul taste or poison; and 6) advertise various services. [Source: Les Kaufman, National Geographic, May 2005]

Reef fish use color to advertise their sex, their sovereignty over a patch of reef, their willingness to mate, their readiness to fight and highlight a victory in a battle. Bright colors may be easy for predators to spot. Most bright colored fish hang close to the reef, where they can make a quick escape if a predator approaches. [Ibid]

Markings and stripes are often intended to break up the outline, size and shape of a fish, which makes them difficult for predators to locate. Predators often lunge for reef fish in the direction they think the fish will go. To protect itself the soapfish changes the orientation of its stripes and the color of its eyes when threatened so that predators are not exactly sure which side is the front of soapfish and which is the back; consequently the predator has only a 50-50 chance anticipating which way the soapfish will flee. The soapfish can also coat itself with toxic slime to make itself unpalatable to predators.╆

Some species of gobies actually use their bright colors like a neon sign to attract large fish. The gobies are sought after by large fish because they eat parasites such as sea lice and copepods; in return the gobies get a free meal.╆

One reason reefs are so colorful is that color and vision are useful in water that is so clear and sunlight can can penetrate so easily. Creatures that live in the reef often have keen senses of vision. When the water is murky fish and other creatures tend to rely more on smell, taste, touch and sound.

Changing Colors and How Reef Fish Colors are Produced 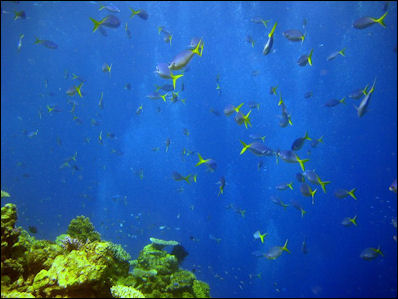 "Fishes generate a rainbow of colors in somewhat the same way that human artists do by combining primary pigments — red, yellow, and blue — plus black and white. They do so by an ingenuous use of guanine, melanins and carotendois.” Black and shades of brown and gray are produced with the melanins, which are similar to the melanins in human skin. [Source: Natural History, September 1999]

Guanine, a common metabolic waste product produced by blood deposits in the skin, give some reef fish their shimmering iridescence. One of the most common organic compounds in nature, it manifests itself in pure form as tiny flattened crystals, each of which reflect light like a microscopic mirror." These crystals can be set up in different arrangements to reflect and absorb different bands of light that create different colors. [Ibid]

Many fish can change their colors on and off in seconds. See wrasses, flasher wrasses.

Many bright-colored reef fish change color to darker "pajama patterns" at night. The sand perch has stripes and bright colors during the daytime and dull, drab camouflaged splotches at night. Conversely, the five-inch-long squirrel fish looks brown and drab during the day but at night it turns brilliant red.╆

Colors and patterns change with age. Juveniles often have different pattens than adult. Studies have shown that fish that change color need their eyes. Those that have been blinded are unable to change color.

Marine creatures that change their colors quickly do so using chromatophores, skin cells with pigments that produce color and patterns by contracting and expanding with stimuluses from both neurons and hormones. Squid, octopus and squids use chromotophores. Pale colors are produced by specialized chromatophores called leucophores. Blue and iridescent colors are generated by iridophores, which manipulate crystals of guanine to scatter white light and then reflect specific wavelengths as needed. 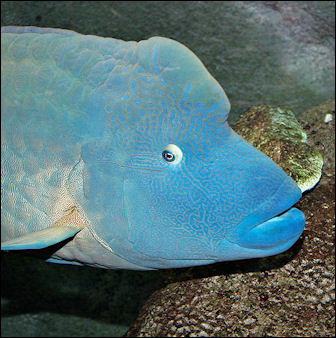 Humphead_wrasse Diurnal reef fish can often more see colors than humans and parts of the spectrum that humans can't discern. Their eyes are generally small and usually have a thick layer of melanin that prevents light from bouncing around inside the eye, disrupting their visual images.

Nocturnal fishes often only see in black and white. Having evolved from species that once lived in deeper water, they often have big eyes with big pupils that can perceive a lot with only a little light. It is not clear how good reef fish vision. Some species have been observed feeding on diver's bubbles, apparently confusing them for small silvery fish.

Predator fish such as barracuda and groupers are most active at dawn and dusk and their eyes contains features found in both diurnal and nocturnal fish. Some sea creatures may react to contrasts rather than colors themselves. Shrimp that are bright red and white might actually look black and white to a reef fish, who respond to the contrast not the color.

Reef fish make quite a bit of noise underwater if you are tuned into the right frequency. Underwater noise includes groupers making a creaking door noise when they spot prey, cichlids emitting grunts, hamlet fish letting out loud squeals, the popping sound made by pistol shrimps, the crunching sound of feeding parrotfish and the grunts of damsel fish.


clownfish “Cleaning stations” are places on the reef where cleaner wrasses, cleaner shrimp and other creatures clean fish that visit the station. Some fish return every few days. Even thought the cleaners can deal with up to 50 customers an hour, sometimes lines form. The fang-toothed belly is a fish that mimic wrasses. It enters the mouth of a victia fish's mouth and bites off a piece and quickly darts away.

Some 26 species of fish and six shrimps are known as cleaners. In places with no wrasses, cleaning is often done young fish. The most commonly removed organisms are fish-lice, specialized crustaceans that survive by eating the tissue and sucking the blood of their hosts. Some fish-lice burrow so speedily into their hosts the only parts of their body that are visible are their tails.

Conies are another species of fish which change from females into males, and visa-versa. The purple fridmani does them one better by changing its color and its sex. After spending part of their life as orange and gold female it is transformed into a purple and red male.

Scalefish also change color and sex. They are born as orange-red females. As the they get older some turn into purple males. These schooling fish are organized into a hierarchy with the males at the top and large females and small females respectively underneath. The hierarchy stays intact when a school is stable, but if some males die off then females, no body know quite how, change into males with a couple of weeks.

Blue-gilled wrasse society is made up of “normal” males and “feminized” males — fish that look like females but have mate gametes — who reproduce by help dominant males to mate with females and in doing so they get more chances themselves to reproduce. When a male fairy basslet suddenly disappears for good. Often with hours, the dominant female begin showing male characteristics. Within a few days she is a male.