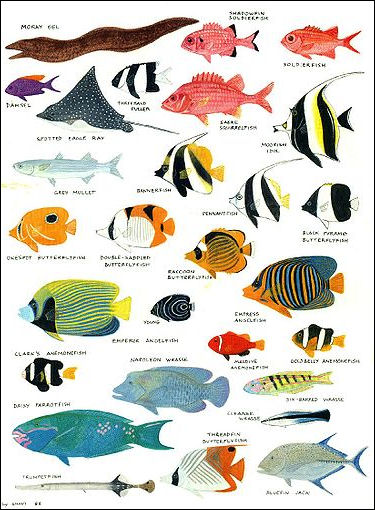 Reef fish Napoleons are impressive-looking and colorful medium-size fish that get their name from the bump on their forehead which reminded some of a French-style tri-corner hat. Other colorful and unusual-looking reef fish include chromis, lizardfish, batfish and hogfish.

Sweetlips are a fish found in the Pacific and Indian oceans that have thick "lips" and pucker their mouths like it will kiss. They are a schooling fish with yellow fins and spots arranged in a zebra-style patterns on its back. Other colorful schooling fish include unicornfish, surgeonfish and some species of angelfish and damselfish.

The fairly basset, a pinkish and yellow fish, spends most of its life swimming upsidedown. Related to sea horses, trumpetfish fool predators and prey by imitating plants by hovering just above the reef while they search for food. They spends most of their live swaying in soft coral gardens with their nose in the sand and tail overhead, waiting for meals to pass their way.╆


emperor angelfish Angelfish are among the most colorful inhabitants of coral reefs. Their flamboyant colors and patterns often changes as the grow up from juveniles into adults. All juveniles of the Indo-Pacific genus “Pomacanthus” have similar patters made up of concentric lines when they are juveniles but as they develop each species develops characteristic markings.

Angelfish have a deep body that is flattened on the sides; a small mouth with comb-like teeth; and backward-pointing spines in each cheek. Unlike most fishes it has a digestive system strong enough to digest the tough flesh of sponges, which are plentiful on coral reefs

Angelfish often produce a loud thumping noise when alarmed, enjoy being massaged by bubbles from emanating from a scuba diver's air hose. If the diver holds his breath angelfish will sometimes tap the diver's mask as if to ask "Why'd you stop?"

Emperor angelfish live in harem groups. If the dominant males dies one of his harem will change sex and become the dominant male. When they are juvenile they are dark with concentric wavy circles of white lines. Adults have alternating yellow and purple oblique stripes on their body and light, dark blue and black markings around their head and pectoral fins.

The Moorish, idol a beautiful black, white and yellow striped angelfish that eats sponges, was once considered sacred to some Muslims.

Butterflyfish are among the most colorful of all reef fish. There are several species that are all approximately the same size (only a few centimeters long) and roughly the same shape (slim, rectangular with high foreheads and small mouths). Each species has its own particular place on the reef and a particular favorite food. Vivid color patterns distinguish one species from another and help each species remain with is own kind.


butterfly fish Butterflyfish have high flat bodies and long snouts ideal for slipping into crevices and picking out out small animals and hard to reach food. Long-snouted butterfly fish use their long snout to suck out coral polyps. Another species specializes in eating a particular kinds of crustacean. When threatened by predators, butterflyfish can dart into the coral in a fraction of a second.

During the mating season butterflyfish males often head for open water and dilate the pigment granules and become even brighter in color than usual. During fights males beat the tails to send pressure waves and respond to the patterns on the opponents tails. Losers signal surrender by changing their body patterns and colors. Winner are free to court the females. They uses the same colors and patterns they did when fighting other males except that the colors and patterns elicit a different response among females that usually results in sex. Male and female butterflyfish often live together in pairs and keep the same hiding places in the reef for years.

The patterns on young emperor butterfly fish — ultramarine flanks with white concentric lines — is different from that of adults — parallel lines of yellow and blue. This is probably the case so young fish can show males there are not old enough to be a threat for females or a territorial rival.

The copperband butterflyfish has three orange bands ons its sides and narrow black band at the base of its tail these markings and the black eyespot on the dorsal fin are designed to confused predators. At night is develops a blotchy coloration so its blends in with the background of the reef.

Some butterflyfish and damselfish can be found hanging out among the tentacles of sea anemones like clownfish. They build up a resistance to the poison by rubbing parts of their body against the tentacles over a period of time. Occasionally they eat sea anemones.

Male Garibaldi damselfish tend fertilized eggs and seek mates by swimming in loops and grunting loudly and producing a thick mat of algae for the female. . Those that clean off rocks so only maroon algae grows usually easily find a mate. Studies indicate that females are more attracted by the algae than the male. The mat of algae may allude to the male’s skill at taking care of the eggs. 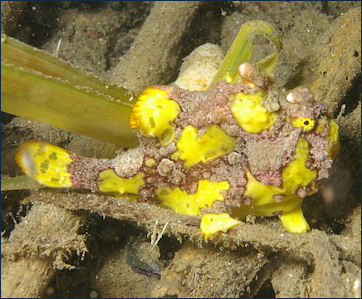 Frogfish, a member of the stonefish family, are brilliant masters of disguise in brilliantly colored coral gardens. They come in a dazzling array of colors — orange with brown stripes, yellow with red markings and splotches like on an algae-covered rock — and are covered with feathery ghoul-like appendages that make them easy to confuse with a piece or coral or a sea anemone. [Source: Fred Bavendam, National Geographic, July 1998]

Hanging from their mouth, frogfish have an appendage with a worm-like piece of flesh that is used to lure prey. Like stonefish and stargazers frogfish find a nice cozy place to hide themselves and wait for prey to come their way, attracted by the lure. As prey approaches, the frogfish snatches it in one-sixth thousandth of a second with its mouth. It has the fastest "gape and suck" of any fish — so fast fish around the prey often don’t realize anything has happened.

Frogfish are found in seas throughout the world but they more common in the coral reefs off Indonesia and Australian, particularly in northern Sulawesi's Lembeh Strait and near Edithburgh, Australia. Frogfish are such master of disguise that scientists have a hard time finding them. Sometimes they also have a hard time identifying them. Some species look almost the same expect they come in different colors. Others can change color in a few day or minutes. Forty-one frogfish species had been recognized as of the late 1990s.

Some frogfish species are better suited for crawling along the ocean floor than swimming. When approached by potential predators, a frogfish can open its mouth wide to make it appear large than it is. It can also enlarge its mouth to suck down prey twice its size.

Female frogfish lay thousands of eggs, which are fertilized outside her body by a male’s sperm. The males sometimes picks up the eggs deposited by the female and blows them from his mouth along with bubbles of mucus. The mucus hardens around the egg mass and creates a light floating bag. The eggs sink to the bottom when the embryos hatch.


french angelfish Pearlfish are long, slim, scaleless fish that live mostly among clefts in the sea floor. Their homes are often so narrow they have to enter them tail first. One type of pearlfish that feeds in the open water shelters itself in the cavity of pearl oyster shell. The fish gets its name because sometimes it dies in the shells and gets covered in mother-of-pearl.

Transparent eight-inch-long pearlfish live inside some species of a sea cucumber. During the day the pearlfish rest inside a hollow cavity in their hosts and at night they slip out to forage among the reef.

Young pearlfish can enter the anus easily. When they are older they have insert their sharp-pointed tail into the anus and twist their body and enters the sea cucumber like a corkscrew.

Male pipefish, a relative of sea horses, also get “pregnant.” When the male and female mate, the female attaches her eggs to the underside of the male. The skin of the male under the eggs swells and produced a pocket that holds the eggs until they hatch.


clown triggerfish Rabbitfish live near the sea bottom in shallow water around coral reefs. They are brightly yellow, black and white in color. They feed on algae that grows at the base of dead corals and have a single row of spade-like teeth that enable them to snip off bits of its food.

Rabbitfish are a relative of sharks. The are so named because the shape of their heads, mouths and teeth are like that of a rabbit. Some species have poisonous dorsal fins that it extends when frightened. Males and females mate for life.

Sea moths have a proboscis-like snout and clawlike fins. The hop along the ocean bottom and probe with their snout for food.