blue triggerfish "Coral eating" fish such as parrotfish, triggerfish and surgeon fish feed on the algae rather than the coral polyps themselves. Many do this by eating the rocky coral itself, extracting the food the need and grinding up rocky material and expelling it as sand. The source of much of the recently made sand sediments around the reef is from parrotfish and other coral eaters. Not all coral-eaters use this method. The leatherjacket is bright green fish with orange spots. It feeds on coral by clamping its mouth around the entrance of a polyps chamber and sucking out the polyp.

The humphead wrasses is one of the giants of the reef. It has a massive forehead and can weigh as much as 400 pounds. They are docile creatures with a mouth and digestive track similar to those of a parrotfish. The bony plates in their throat are capable of crushing cowries shells, spiny sea urchins and other kinds of shellfish as well as coral. The "lips" of the humphead wrasse are considered a delicacy in Hong Kong, where they sell for $225 a plate. 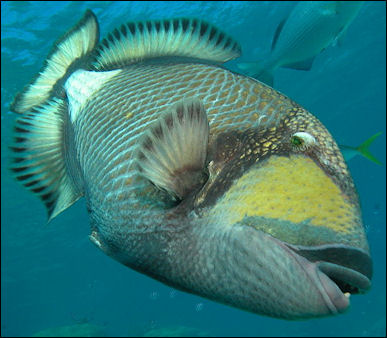 Parrotfish are fish that live around coral reefs that get their name from their bright colors and beak-like mouths. The mouths have plates "edged like a concrete-cutter's saw" for teeth. The fish scrapes and bite off pieces of coral with its beak and chews them with a powerful jaws and set of molarlike teeth deep in its throat. Their second of jaws help extract algae growing in the coral polyps and grind down the coral into sand.

The coral's limestone exoskeletons passes through the parrotfish's body, and is ground into sand by more plates in the fish's throat, and defecated as a slurry of coral. It is estimated that one parrot fish transforms 200 pounds of coral to sand each year. Their bodies make a crunching sound when they sleep.┭

At night parrotfish enter into a sleep-like state inside filmy, mucous cocoons that covers them from head to foot. Scientist once thought the cocoon hid the parrotfish's scent from nocturnal predators. But that doesn't seem to be the case and scientists now are not sure why they have the cocoon. Parrotfish sometimes change sex.

Enormous humphead parrotfish (not to be confused with humphead wrasses) can weigh around 200 pounds and reach a length of almost four feet. They have tiny eyes, a pronounced peak and a large bulbous, scarred forehead. One individual can consume five tons of coral a year.

Describing a school of humphead parrotfish, David Doubilet wrote in National Geographic, "Long before I seem them, I hear them. The noise comes through the sea like a riot in a dining hall, a smashing and grinding of crockery. The giants are feeding on the reef like the undersea buffalo grazing on stony pastures...Even as they crunch the coral, they excrete white plumes, pulverized coral sand that looks like locomotive steam."


coral eaten by parrotfish Surgeonfish begin life as transparent spuds, turns yellow during adolescence and become deep royal blue when they reach adulthood. The largest bacterium known to man is visible to the naked eye and lives in the intestinal tract of surgeonfish found in the Red Sea and the Great Barrier Reef.

There are 72 species of surgeonfish. They have relatively high compressed bodies are so named because of their scalpel-like spine or spines on the side of their tail. The spines are used both as a defense against predators and a weapon in fights with rival surgeonfish. The spines are delivered with quick sideways swipes of their tail and can leave behind nasty wounds. Unicornfish are members of the surgeonfish family. They are so named because of the hornlike projection on their forehead. Many species feed on leafy algae attached to the seabed.

Around dusk at certain times of the year, surgeonfish suddenly stop eating and organize themselves into long chains, with individuals about half a meter from one another, and head to the open ocean side of the reef. Many chains of surgeonfish join together to form dome-shaped school with around 2,000 fish that begins an unusual reproduction ritual. [Source: Joseph Levine, Smithsonian magazine and the book “The Coral Reef at Night” ]

Describing the mating ritual in the Red Sea, Joseph Levine wrote in “The Coral Reef at Night”, "As the light dims noticeably, a dozen individuals gather more closely together within the pulsing mass. They separate slightly from the group as the dome reaches it peak. Finally, as though released from a tautly strung bow, first one group, then two groups, then five, sharply fling themselves toward the surface, pivot sharply and dash back down into the milling swarm. At the apex of each group's ascent, its members leave something behind small clouds of transparent eggs and white sperm that float slowly away...After the mating dance, the surgeonfish return single file to their reef haunts and dart into their favorite hiding place.

Why do surgeon fish and other reef species spawn at dusk and loose themselves in what they are doing when they are most vulnerable to predators? They do it for their offspring eggs and larvae which are fed on by sharp-eyed daytime reef fish that see less well and seek cover in the evening.


clown triggerfish The foot-long triggerfish gets its name from its retractable dorsal fin which is usually hidden, but can be pushed out inside a crevice so the triggerfish can lodge itself in safely when pursued by a predator or pushed around by ocean waves.

Triggerfish move around using fins that are located mostly around the tail. It has a large flapping dorsal fin that its next the tail and an equivalent one on the underside. The trigger, which gives the fish its name, is the leading ray of its dorsal fin which had become bony. The two rays behind it have been turned into a locking device on the joint of its base. When waves crash over the reef, the fish swims into a crevasse, sticks up its bony trigger and locks into place so firmly that virtually nothing can extract it: ocean currents, predators or scuba divers.

Male triggerfish, fearing competition from the hatchlings of a rival, sometimes lure a female from her nest by feigning an attack just long enough for small predators to feast the her eggs.

Triggerfish are relatives of blowfish. They use muscles to blow out water out of their bodies that are similar to the ones blowfish use to pump in water when they inflates. Having all of its fins near the rear of its body allows a triggerfish to use its body and mouth to reach choice bits of food.

parrotfish Triggerfish feed mainly on coral, crushing the stony shells and extracting the polyps. They have sharp teeth and powerful jaws that can crush apart things like crabs, spiny lobsters, burrowing worms, snails and sea urchins. They produce noise when they grate their teeth together.

Triggerfish feed on sea urchins by first blowing a jet of water on the urchin to turn it upside down. Avoiding the short spins on the underside the skilled predator pecks away at the urchin's shell with its beak-like mouth to get at the urchin's fleshy interior.