lionfish Poisonous marine creatures like lionfish, stone fish and sea snakes are basically gentle and only attack if provoked. Scuba divers generally approach them with little to fear. Reports of attacks by poisonous fish are rare but they do occur.

In September 1998, an 18-year-old man died after apparently being bitten by a fish or sea snake while snorkelling off Majorca during a catamaran trip. He was pulled back on to the boat after his girlfriend raised the alarm and began foaming at the mouth as he was taken by speedboat to a nearby jetty. [Source: Daniel Waddell. Electronic Telegraph]

Staff from a local medical center attempted to revive him with heart massage. A friend who was on the trip, said: "It was very distressing. His girlfriend was on the jetty with him, and when the doctors stopped the massage, she let out a howling wail. It was awful." One person on the boat said that a snake was responsible, but a description given by crew members to a marine expert in Palma pointed to a spider fish. Their bite is normally not fatal, but there could have been an allergic reaction.


lionfish Lionfish get their name from their feather-like dorsal fins. They have also been called zebrafish because of their brown and white striped bodies and turkeyfish because of the flappy skin under their chin. There are different species of lionfish such as the zebra lionfish and the twinspot lionfish which display species-specific pectoral fins when threatened or trying to attract females .┭

Describing a lionfish sting. Susan Earle Ph.D. wrote in National Geographic, "As the pain began to spread through my hand, I tried to entertain myself by watching a graceful school of small damselfish...Within ten minutes I closed my eyes and could think of nothing but the intense, stabbing agony that was building in my finger. Only twice before had I known such pan: briefly, in a dentist's chair, and during childbirth...Tears came. I wanted to cry out, but with a regulator in my mouth...I could only remain silent...After 45 minutes my finger had swelled to nearly double its normal size, and my arm and shoulder began to ache as well. But finally, as the hour ended, the sensation began to diminish...The burnish in my finger continued for two hours, and tenderness and swelling was evident for several says."

Lionfish sometimes cruise around upside down. They sometimes use the colorful pectoral fins and feathery appendages to confuse and herd prey. Lionfish sometimes hunt in packs, encircling a school of fish and then taking turning turns lunging and getting a mouthful of bait-size fish. This kind of cooperative hunting is rare among fish.┭

Lionfish are a native of the Indo-Pacific region. In the early 1990s they began appearing off the Florida coast. Many think they were introduced by aquarium hobbyists. With no known predators the poisonous fish have spread as far north as the Carolinas and as far east as Bermuda. There are worries the fish might disrupt commercial catches. In the Bahamas, divers and fisherman are told to kill any lionfish they encounter.


scorpionfish The scorpionfish family counts 300 members around the world, including feathery lionfish, bottom dwelling scorpionfish, and stonefish, the world's most venomous fish. Stonefish and scorpionfish venom is very poisonous. Stings are extremely painful and can cause death. There is an antivenin. [Source: David Doubilet, National Geographic, November 1987 , ┭]

Scorpion fish spend most of their life sitting motionless on the sea floor, half buried in the sand, waiting patiently for food — small fish, crustaceans and even other scorpionfish — to come their way. When one does the well camouflaged fish gulps its victim down in one lightning quick bite. Scorpionfish have leglike pectoral fins which allow it to walk along the sea floor. When the predator swims bright colors are revealed behind backside of the fins, which are normally hidden. The bright colors may be a warning to other predators that the scorpionfish's dorsal spines are venomous.┭ 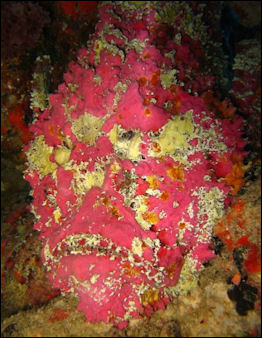 stonefish Stonefish are the world's most venomous fish. They are also amazingly well camouflaged. Some species look like small boulders covered with red and green algae, and even if you are looking straight at one it is difficult to make out were the mouth and eyes are and tell the front of the fish from the back. Spines on the fishes back contain a powerful venom. Always make sure you have on a pair of foot-covering flippers if you are anywhere in a place with stone fish because the way most people are stung is by steeping on one.┭

Stonefish are found through the South Pacific and Indian Oceans. The sting causes extreme pain and rapid paralysis, but is rarely fatal. If stung by a stonefish, immerse your foot in hot water to relieve the pain.

Stonefish have venom on each of their thirteen spines. "The sting is so excruciating," says Doubilet, "that people have begged for death and sometimes gotten their wish...The pressure of a victim's hand foot or hand on a dorsal spine pushes back a fleshy sheath containing venom glands, squeezing venom up two grooves on the needle-sharp spine. In a sense the victim shoots itself. Even the sting of a dead stonefish can be disabling.” An antivenin developed in Australia is effective against several bit all of the stonefish species. ┭

A stonefish's pink skin, which is also venomous, hosts tiny worms, crustaceans and algae (the source of the green on the fish's skin). Periodically the stonefish gets rid of these encrustation apparently by injecting them with poison. The only sea creatures known to feed on stonefish are sea snakes.┭ 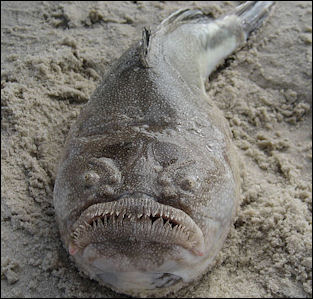 Northern stargazer Stargazers resemble flattened stone fish. There are 50 different species of them and they are widely distributed in tropical and temperate waters in the Pacific, from the Americas to Southeast Asia. They are called stargazers because both eyes on the top of their flat bodies appear to be gazing up at the stars.

Stargazers have a pair of poison dorsal spines which provide protection from predators. Some species have electric organs behind their eyes which give off a 50 volt jolt. Although less powerful than the charge of an electric eel or an African electric catfish, the jolt is powerful enough to stun prey or give a powerful jolt to a careless diver who makes the mistake of picking one up.

Stargazers spend most of their time lying buried in the sand, with only its eyes and mouth exposed, waiting to immobilize passing fish with an electric shock and then gulp it down with its lightning quick oversize mouth. Describing a stargazer attack of small fish, photographer Mike Severns wrote in Natural History, "It exploded from the sand, leaving a thick cloud of silt hovering in the water. Then it promptly retreated to the bottom and reburied itself. “