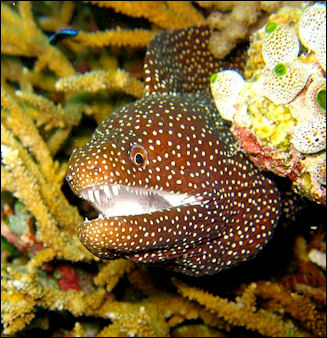 moray eel Black tip reef sharks and white tip reef sharks are commonly seen at reefs. There have been few reports of human attacks. Scuba divers tend to seek them out rather than avoid them. See Sharks

There are many species of predator in the reef. Sometimes they prey on the smallest of fish and is hard to think of them as predators. Squirrel fish are predators that spend much of the day in reef crevasses. Trevallies, or jacks are medium-size predators that travel in schools. Reef skimmers and snappers have piranha-like teeth.

Several species of fish are often seen in the company of large predators. Pilot fish are small- to medium size fish with black stripes are that are often swim with fish such as sharks and rays. The large fish help the pilot fish by protecting them from potential predators and the pilot fish return the favor by feeding on parasites on the sharks.

Remoras use their suckers to hitch rides on sharks, whales, turtles, rays, dolphins almost any fish or sea mammal that is large enough to carry them. The they have a sucking disk under their head The sucker allows the fish to save energy. It is not used to suck blood like a lamprey, its is merely a fastening devise Its host provided with transport and gill venilable and protection from predators and food scraps. In return the remora cleans off parasites from its host’s skin.

Barracuda are strong, fast-moving predators that have few enemies other than large sharks. They have a long muscular body, a large head, long snout, a forward-projecting jaw and scary-looking spike-like teeth. They are found in all the world's oceans, although they seem to be biggest and most plentiful in the Caribbean.


barracuda Barracuda can reach lengths of two meters and weigh up to 50 kilograms although usually they are around one meter or a little more in length. They tend to stay close to the surface in warm waters and are rarely seen in cold water or below a depth of 100 meters. Juveniles are sometimes found in large groups but most of the time adults are found in small groups or alone.

Barracuda look menacing and are very curious. They often follow divers around, but they rarely attack anyone. Fish don't have it so easy. When a barracuda clamps its jaws around a snapper divers have said they heard the crunching of bone under water.

If you go snorkeling or diving in waters with barracuda, don't wear glimmering metal objects like jewelry or a watch; barracuda are attracted to these things and you. Also don’t provoke the, A barracuda bite can cause serious injury. often her stories about women wearing anklets whose feet were attacked when they dangled in the water. Such attacks often occur in murky eater when the barracuda mistakes the jewelry for a fish.

Barracuda’s long body and sharp teeth are adapted for swimming fast for short periods of time and biting. attacks by lying relatively motionless and then suddenly lunging forward. To grab prey. They are most active at dawn and dusk. Barracudas catch prey by circling round a school and choosing a moment when they might be confused, especially around dusk to dawn and biting a skalsing and hoping to snag a confused fish

Barracuda are a popular game fish and sometimes eaten but can poisonous to eat. Large individuals can cause ciguatera poisoning — a potentially poisonous condition caused by toxins the barracuda ingest in their food.


black rockfish Groupers are generally solitary predators. Like other predatory fish such as barracuda, they are most active at dawn and dusk. Some prefer deep waters. Others are found in warm, shallow coastal waters, often in coral reefs and sometimes in estuaries. Groupers have been described as patient hunters because they like to lurk in caves or crevices and wait for a crustacean or slow-moving fish to pass their way and then lunge, open their large mouth and suck in the prey. Coral groupers catch fish with the suction created when it opens its huge mouth.

Groupers live for a long time and reproduce for short periods. Some species gather in large groups to spawn. Groupers tend to be fond of spiny lobster and also frequently eat crabs, small fish and juvenile sea turtle. When they are young they are fed on by other predators but if they manage to make it to adulthood the only real threat they face comes from humans.

There are several species of grouper. The giant grouper, which lives in the Indian Ocean and the western and central Pacific, is one of the largest species and is known to occasionally feed on small sharks. Other large species include the jewfish and goliath grouper. Many kinds of groupers can change their color to match their surrounding. Some species register victory or defeat by changing color.

Large jewfish can weigh as much as 300 pounds. Scientist have found whole sea turtles in their stomachs and divers have been rammed by them and knocked unconscious. The head and shoulders of a navy diver was once swallowed by one but the diver managed to pull himself out. As a rule, however, jewfish generally hang out in caves and usually flee when they come into contact with divers.╆


Groupers sometimes are tame enough to be fed by hand. But don't go diving near such groupers unless you have a free hand out. Diver who have done this have discovered that groupers can also feed "on" hand. Groupers the size of refrigerators have been known to follow divers around like dogs. In spear hunting competitions divers have said large groupers were often ideal target because they were slow and incurably friendly..┭

Groupers have beeen dangerously overfished in some places. They are all but extinct in many parts of the Caribbean. Because they attain a large size there are generally few of them in a reef. Because they take so long to grow and reach that size once they have been fished it takes a very long are for them to return.

Because some species of grouper spawn at same place and time every year, they are an easy target for fishermen. On the full moon of December, January and February, thousands of Nassau groupers once gathered at a reef near Isla Guanaja in the Gulf of Honduras to spawn. Divers who discovered the site in 1988 were astonished by water turned white with eggs and milt from these 15-pound fish. The divers tried to keep the location of the reef a secret, but fisherman eventually found it and after a year bountiful "fishing moon" catches the population of fish plummeted to 500. 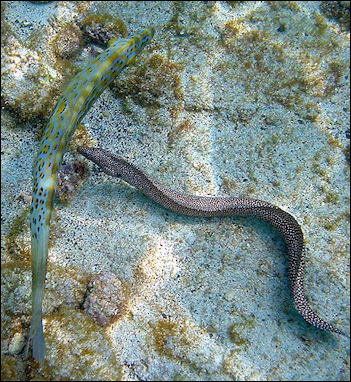 Bluestriped grunts sometimes approach each other with their mouths wide open, looking as if they about to kiss or swallow each others face. No one is sure why these foot-long fish do this although scientist speculate it is a male territorial thing.╆

The 35 species of hawkfish are found in tropical waters and tend to lie on the sea bottom around coral and rocky reefs, waiting for prey come by, snatching them when they do. They feed mainly on crustaceans and small fish. If they feel threatened they use their pectoral fins to lodge themselves in a crevice making it difficult for predators to get at them and extract them. The fish tend to live on their own. Sometimes males form harems in their territory.

Jacks swim in schools during the day for protection against barracuda and other predators and separate at night to hunt smaller fish. Sometimes they rotate in near perfect gyres when they school.

Red snappers can are among the more aggressive predators on the reef, The have need sharp teeth and a voracious hunger and reach lengths of 70 centimeters. unless provoked. Red snapper is a name used to describe many species of fish served up at restaurants. They are not necessarily the ones you find at the reef. The American red snapper reaches a weigh of 35 pounds but is usually eaten when it weighs 10 pounds. Adults live around rocky reefs. Juveniles along sandy or muddy bottoms. They are often caught by dredges on shrimp trawlers.


moray eel There are many species of moray eel. The bigger ones can reach a length of four meters. The favorite meal of many moray eels is fresh octopus.

Moray eels generally spend their day in their tunnel homes and emerge at night to hunt prey with sensitive sense of smell and corner prey in crevasses and caves. They open and close their mouths in the gasping way they do to pump water through their gills. Some moray eels permit butterflyfish swim in and out of their mouth to do cleaning.

Moray eels are generally very shy. They generally don't attack people unless provoked.. Some will let divers hand feed them. Some divers have been seriously bitten after sticking their hands in a moray eel's cave.

Two of the Taylors best friends in the Great Barrier Reef are a pair of morays nicknamed Harry and Fang. Harry was particularly good tempered. Once Valerie pulled from his cave and swam forty feet with him to show him to some school children, and he didn't show the slightest bit of resistance.

Unusual Jaws of the Moray Eel 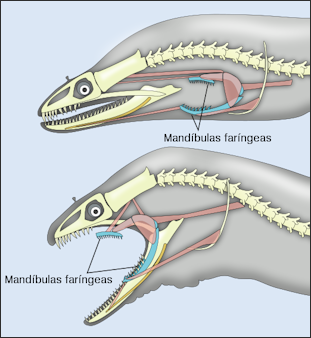 moray eel jaws Moray eels have two sets of jaws, including a pair set way down the creatures throat that can slide forward and backward sort of like the multiple jaws in creature in the Alien films. The primary uses of the rear set of of jaws is to restrain prey, position it so that it can slide easily through the eel’s long narrow esophagus and digestive tract so the digestive process can take place. The rears jaws have been compared to the hook that places a car body on an assembly line.

When a moray eel catches a fish with its sharp teeth, the second set of jaws extend forward from the throat and grab the fish from the front teeth, and then retreats with the fish into the eel’s esophagus. Unlike most other fish, Rita Mehta of the University of California at Davis told National Geographic, morays don’t seem to generate enough suction to help it swallow, and need the jaw to restrain and transport the fish. Snakes, which have long slender bodies like moray eels, have a set of ratcheting jaws that grip and maneuver food into the gullet.

Mehta used a high-speed video to shot a reticulated moray eel eating a squid with its mouth open and was amazed to find how quick the second jaw in the throat surged forward it grab food and how far it came. Further investigation using a fluoroscope and an X-ray movie machine revealed that the second set of jaws slide all the way forward so its teeth were equal with the eel’s eye.

Morays have another way of seizing prey and eating. They will loop their bodies around prey similar to the way a python does but instead of squeezing the victim to death a moray pulls its head through the loop, holding the victim in a a tight grasp while ripping off bite-size chunks flesh.