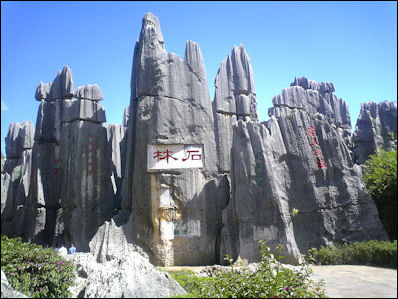 Karst rock formations in China Karst is a terrain with distinctive landforms and hydrology created from the dissolution of soluble rocks, principally limestone and dolomite. Karst terrain is characterized by springs, caves, sinkholes, and a unique hydrogeology that results in aquifers that are highly productive but extremely vulnerable to contamination. In the United States, about 40% of the groundwater used for drinking comes from karst aquifers.

Some famous tourist spots like Guilin in China, Halong Bay in Vietnam and Phang Nga in Thailand — which are known for their rock formations — are located in Karst areas. Some karst areas in the United States are famous, such as the springs of Florida, Carlsbad Caverns in New Mexico, and Mammoth Cave in Kentucky, but in fact about 20 percent of the land surface in the U.S. is classified as karst. Other parts of the world with large areas of karst include China, Europe, the Caribbean, and Australia.

The word “karst” — literally “rocky mountain” — comes from a region in former Yugoslavia that includes Croatia and Slovenia. The word is derived from the Slavic word krs or kras. The Kras Province is a small region in the Dinaric and Julian Alps in Slovenia. The heart of the karst area in Croatia is beautiful Krka National Park around the Krka River. Covering 142 square kilometers, the park embraces striking canyons, waterfalls, lakes, rapids and stunning karst scenery.

Limestone is largely made up of calcium carbonate, much of it created by coral, mollusks and gastropods in ancient seas. Lomestone dissolves when rainwater carrying carbon dioxide seeps into it. The chemical reactions create karst topography and caves.


Karst waterfalls in Croatia Rainwater seeps into crack into the rocks, creating underground water systems, which in turn form tunnels and caves.

Karst hydrogeology is typified by a network of interconnected fissures, fractures and conduits emplaced in a relatively low-permeability rock matrix. Most of the groundwater flow and transport occurs through the network of openings, while most of the groundwater storage occurs in the matrix. As a result, most karst aquifers are highly heterogeneous and anisotropic, and much of karst research has focused on developing innovative approaches for better understanding and managing these valuable water resources.

Tom Aley, author of a May 2010 article about karst's unique water recharge system, wrote: "Karst groundwater is an incredible natural resource. It provides drinking water for many of our residents, beautiful springs to feed our waterways and habitat for many unusual underground species. The quality of the groundwater is dependent upon how we use the land and how well we protect the quality of groundwater recharge. An old adage is that whatever goes up comes down. In karst areas, whatever goes down, comes up — up through a cave, a spring or a well."


Rock forest in Madagascar A Karst region describes a large area covered by limestone with features particular to region such as steep-sided knolls, waterfalls, sinkholes, caves, spectacular rock formation and rivers that disappear underground and reappear.

Karst areas have four primary features: 1) Sinkholes — rounded depressions in the landscape formed by water slowly dissolving the rock below or, in some cases, when an underground cavity collapses; 2) Disappearing streams — surface streams that loses a significant amount of their flow to the subsurface through bedrock openings; 3) Springs — caves filled with water, which is discharged to the surface; and 4) Caves — cavities formed beneath the earth’s surface, when water dissolves the limestone or dolomite by chemical action.

Caves are holes, tunnels or chambers underground or in the sides of mountains or hills. Most are created by water erosion and many occur in places with a lot of limestone, which dissolved in water. Water absorbs tiny amounts of carbon dioxide and changes it to carbonic acid. This acid dissolves limestone.

In the 1890s, researcher E.A. Martel said “No theory about the origin of caves is universal,” meaning there is no single explanation that can account for all the caves in the world. Factors that contribute to cave formation are topography, fractures and cracks in the rock that water can pass through and the movement of water from upland to lowland areas.


Sinkhole in Oman Water moving through bedrock enters the underground cavity, losing carbon dioxide to the cave’s atmosphere. The chemistry of the water changes the minerals dissolved from the overlying limestone and dolomite and cave deposits known as speleothems begin growing on the cave’s walls, ceilings and floor.

Many caves begin as cracks in the rock. When groundwater flows through these cracks, especially if the rock around them is limestone, the water dissolves it slowly. Over thousands or millions of years the cracks become larger and eventually enlarge into caves.

After a cave is created water drips down in to it. These drips deposits carry and deposit small amounts of the dissolved limestone (calcium carbonate). Deposits the building from a the ceiling of a cave into icicle-like formation are called stalactites. Similar features that build from the floor of the cave are called stalactites. If you have trouble remembering which is which stalactites "hang tight" from the ceiling. Stalactites and stalagmites come in a dazzling array of formation: ribbons, bacon, fried eggs, draperies, turnip shields, popcorn, and organ pipes.

Ancient peoples used caves as: shelters, places for ceremonial events, burial grounds and sources of water, clay and other minerals. Industries that have thrived in caves have included were mushroom growing and lagering "cold storage" of beer and the storage of wine and other alcoholic drinks.

Caves are usually damp and have high humidity. When they are open to visitors their temperature increases, humidity drops and evaporation rates quadruple. With too much moisture cave formations will stop growing.

People can foul a cave with the dust, bacteria, skin flakes, lint, perspiration, heat and carbon dioxide from their breath. In one hour a human being deposits 60,000 skin fragments, 160 million dust particles, 20,000 clothing-lint particles, 25 quarts of carbon dioxide and 170 watts of body heat.


Cave in Slovenia China has the most extensive and diversified karst terrain in the world and most of them are rich in caves and dolines (sinkholes, usually funnel-shaped and sometimes very large).The fengcong (cone karst) and fenglin (tower karst) formations associated with the Guilin-Li River-Yangshuo area are world famous and are among the most sought out destinations by tourists traveling in China.

The South China Karst was designated a UNESCO World Heritage Site in 2014. According to UNESCO: South China Karst is one of the world’s most spectacular examples of humid tropical to subtropical karst landscapes. It is a serial site spread over the provinces of Guizhou, Guangxi, Yunnan and Chongqing and covers 176,228 hectares. It contains the most significant types of karst landforms, including tower karst, pinnacle karst and cone karst formations, along with other spectacular characteristics such as natural bridges, gorges and large cave systems. The stone forests of Shilin are considered superlative natural phenomena and a world reference. The cone and tower karsts of Libo, also considered the world reference site for these types of karst, form a distinctive and beautiful landscape. Wulong Karst has been inscribed for its giant dolines, natural bridges and caves.