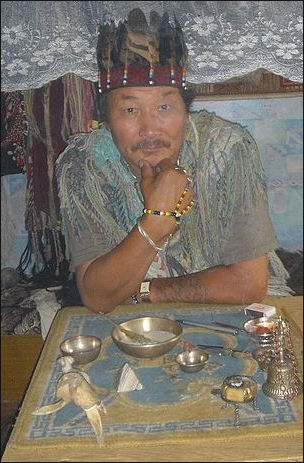 Kyzyl Shaman The Tuvans are similar to the Buryats and Altai and live relatively near them. The Tuvans are a Turkic-speaking people that practice Tibetan Buddhism with a touch a paganism. They look like Mongolians and have many similar customs. They have traditionally been hunters and nomadic herders that lived in yurts and raised sheep, goats, horses, yaks, cattle, camels and reindeer in the high altitude forests.

There are about 210,000 Tuvans today. Nearly all them live in the Republic of Tuva in the upper Yenisey basin near the Mongolian border. They make up 64 percent of the population there, which is around 320,000. Russians make 32 percent. Another 10,000 or so Tuvans live outside the Tuvan Republic; 20,000 live in Mongolia and 4,000 live western China. About 30 percent of the population of the Tuvan Republic lives in Kyzyl.

Tuvans are regarded as among the poorest and friendliest people in Russia. They have traditionally been shamanists and Tibetan Buddhists. There were 725 registered shaman in Tuva in 1931. Half were women. There are far fewer now. As is true with other Russia's Buddhist groups such as the Buryat, the Tuva are members of the Yellow Hat sect of Tibetan Buddhism, whose leader is the Dalai Lama. Buddhism was introduced in the late 18th century and is most alive among the older generation,

The Tuvan have a tradition of rule by tribal chiefs. Tuvans and Mongols sometimes cross the Russian-Mongolian border and steal cattle from each other.

The Tuva Republic (also called the Tyva Republic, near the Mongolian border) is a remote wilderness in southern Siberia on the border of western Mongolia. Billed as the "Center of Asia,” it occupies the upper Yenisey basin and covers 171,000 square kilometers. It is the homeland of the Tuva people. Its capital is Kyzyl.

Tuva is a region of mountain and forests. Mountains occupy 42 percent of the region, Plains only 18 percent. The entire region if 500 meters above sea level, The highest mountain is 3,976-meter-high Mongun Taiga (Silver Mountain). The most fertile land is in the river valleys. Among the landscapes are deserts, tundras, open steppe, dense taiga and reed jungles.

Among the animals found here are wolves, snow leopards, golden eagles, mountain sheep, antelope, foxes, reindeer, sables and bears. Of the 300,000 inhabitants that lived there in the 1990s, two thirds were Tuvans and a quarter were nomads that lived in yurts and raised horses, sheep, yaks and cattle. The climate is extreme and harsh: with temperature dropping to as low as -61 degrees C in the winter and rising to as high as 43 degrees C in the summer.

Kyzyl (300 miles from Abakan) is the capital of the Tuvan Republic and home to 80,000 people. Located on a broad plan at the confluence of the Bolshoy and Maly Yenisey rivers, it is a Soviet-style city with concrete buildings. Kyzyl is regarded as the geographic center of Asia, There is even a monument to support the claim. Sights include the Central Square, the Center of Asia Monument (said to be located at the center of Asia), a Buddhist Temple and a national museum with some medieval Turkish stone carvings, and exhibits on nomadism and shamanism.

Eastern Tuva is covered by forest, rivers and lakes. There are few roads. Most travel is done by boat. Destinations include Lake Aaza, a beautiful lake surrounded by forest and mountains; Erzheey, an Old Believers villages; and Kungurtuga a village near a lake with ruins of an 8th-century Uyghur fortress. Western Tuva is dryer and more mountainous. Destinations here include Ust-Elegest, with large camel herds, Kyzyl-Dag, the home of a new Buddhist Temple; and the Mongun-Tayga district, with yak pastures and a 3,976-meter-high Mongun-Tayga.

Tyva was called the Tuva ASSR until the new Russian constitution recognized Tyva, the regional form of the name, in 1993. The republic occupies 170,500 square kilometers on the border of Mongolia, directly east of Gorno-Altay. It became an autonomous republic in 1961. Tyva is mainly an agricultural region with only five cities and a predominantly rural population. The main agricultural activity is cattle raising, and fur is an important product. Gold, cobalt, and asbestos are mined, and the republic has extensive hydroelectric resources. The capital is Kyzyl. [Source: Library of Congress, July 1996 *]

Over its history Tuva has been ruled ancient Turks, Uyghurs, Yenisey Kyrgyz, Mongols, Mongolian Oyrats and Manchu Chinese. The Tuvans began to take shape as a distinct people in the 17th century when they adopted Yellow Hat Tibetan Buddhism. The first Russians to arrive were gold prospectors in the 19th century.

Archeological evidence shows that people lived in Tuva in Paleolithic times. The Scythians roamed there from the 7th to 3rd centuries B.C., followed by the Huns in th 2nd century B.C. to A.D. 2nd century, the ancient Turks from th 6th to 12th centuries, the Uyghurs in the 8th century and the Kyrgyz in the 9th century. In 1207, Tuva was conquered by Mongols under Genghis Khan.

Tuva was part of China for 150 years in the 18th and 19th centuries and a nominally independent Communist republic called Tannu Tuva from 1921 to 1944, issuing its own currency and postage stamps. Only the Soviet Union and Mongolia recognized the state and Moscow printed its money. Following World War II the Communist Party of Tuva petitioned for Tuva be made part of the Soviet Union. Tuva voluntarily joined the Soviet Union in 1944 and became an autonomous oblast.

After World War II, when Tuva had been absorbed into the Soviet Union, the Tuvan leader suggested to Choibalsan, the leader of Mongolia, that Mongolia do the same Choibalsan is said to have slapped the Tuvan across the face.

Under the Soviets, shaman and monks were killed, monasteries were shut down, land, forests were cut, land was exploited for mineral resources and flood for hydroelectric projects. The clan system was undermined to some degree and extended and nuclear families became more prevalent. Some Tuvan nomads were able to resist collectivization.

After the break up of the Soviet Union, ethnic tensions caused many Russians to leave Tuva. Tuvans rule the government. Some Tuvans want Tuva to be united with Mongolia. The valleys in the Tuva region were once filled with livestock. Even in the Soviet era this was true. Now these valleys are largely bereft of animals. Many collective farms closed down after losing subsides after the collapse of the Soviet Union. Many people have moved away.

Tuvans have traditionally lived in yurts in settlements called “aal”, based on kinships and led by a chief. The yurts were arranged in accordance with the relationship of their owner to the aal leader. They also lived in hexagonal log dwellings and conical tents made of birch bark. Men traditionally did the hunting and livestock rearing while women took care of children and household chores. Some Tuvans still live in yurts.

Tuvans have traditionally been livestock breeders supplemented by hunting and some irrigated agriculture. Herding was done along designated routes to specified pastures, Hunting was done mostly for furs and horns as a source of money. The primary grain crops are oats, barley, millet and wheat. Mining for asbestos, cobalt, coal, gold and uranium is done on Tuvan land.

Typical Tuvan foods include meat from sheep, horses, cattle, goat, camel, reindeer and wild game, roots, cedar nuts, and dairy products such as dried curds, melted butter and cheese. “Arak” (fermented milk) was traditionally made for festive occasions. The Tuvans traditionally did not eat bread, vegetables or fruit but most eat these things now.

In the old days arranged marriage were the norm, polygamy was not uncommon and couples were often married when they were 12 or 13. Polygamy is now illegal, the minimum age for marriage is 18 and love marriage are more common. Divorce is also common as is abortion as a method of birth control.

The lowest average life expectancy in Russia in the 1990s was in Tyva. [Source: Library of Congress, 1996]

Tuvan have a rich canon of oral epic poetry and deep love for music. They use more many different musical instruments and an ornate theater in Kyzyl hosts a number of music and drama events. Minstrels and traveling groups traditionally performed outdoors in the countryside. The Tuvan actor Makhim Munzuk played the title role in Akira Kurosawa’s Oscar-winning film “Dersy Uzala” (“The Hunter,” 1975).

Tuvans enjoy carving soft stones called agalmatolite and pyrophyllite, materials similar to soapstone, as well as carving wood and other stones. Many of their carvings are small hand-size renderings of animals. The style is reminiscent of that of the Scythians. Gold and silversmithing and the making of leather garments us also quite developed.

Tuvan throat music known as “khoomei” is similar to Mongolian two-voice singing. Khoomi singers are male singers who appear to produce two notes simultaneously. One sound is like the metallic warbling of a jew's harp; the other sound is like a moaning growl. Also known as overtone singing or throat singing, the sounds are made by carefully controlling the larynx, mouth and abdominal muscles. Some of the songs are meant to imitate the noises made by sheep and goats.

The origin of khoomei (also spelled hoomi or khoomi) is unknown. It is believed to have originated Chandmani sum (county) in Khovd aimag in western Mongolia. Many khoomei singers continue to come from there. Explaining how khoomei songs began, one singer told National Geographic, "In the western part of our country there are many mountains and streams. The herder is there. He wants to imitate nature—how the wind blows, how the water gurgles. Khoomei."

Khoomei singing is also done by the Altai and Buryiats. It is performed almost exclusively by men (there are a few female khoomei singes from Inner Mongolia) but in the past it is believed that many khoomei singers were women. Today, women have trouble duplicating the deep, powerful voice of male khoomei singers. The best singers are said to come from Tuva.

The simultaneous sounds are made by manipulating harmonics. Normally harmonics are the sound given to a note that helps us differentiate between a violin and trumpet playing the same note. In Khoomei, the harmonics are louder than the drone from which they are derived. Melodies are produced by altering the harmonics of a given note. Some think the style may have evolved from Tibetan Buddhism in which monks producing similar sounds when they chant sutras.

Like Mongolians, Tuvans enjoy long distance horse racing and wrestling. “Huresh” is the traditional form of wrestling. Similar to Mongolian wrestling, it is performed in an open area on the steppe during festivals, weddings and other events. The wrestlers wear colorful costumes, including long-sleeve robes and leather-trimmed shorts.

As is true with Mongolian wrestlin, the eagle dance is performed before the wrestling bouts by the competitors. Competitions are single elimination tournaments within different weight categories. At the end of their final bouts the winner does an eagle dance. The object of a bout is to throw the opponent to the ground. Wrestlers use a variety of holds and need to possess excellent technique. All manner of trips, throws and grips and holds are employed on opponent. Each wrestler has an assistant that provides encouragement and advise during a bout.

“Sur” (Tuvan archery) differs from other kinds of archery in that contestant have to not only hit the target but knock it out of an area. The target is a leather pouch about 15 centimeters high and stuffed with horse hair. Competitor shoots at it from 30 to 50 meters away and try to hit the target out of a 8-x-2-meter box. The arrows are thick and have a blunt end. The box is often taller than the person shooting it.