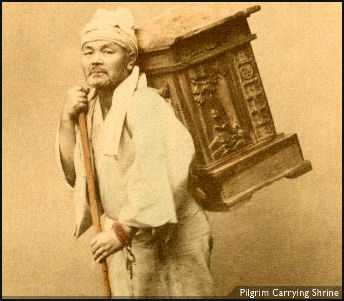 19th century pilgrim Circuit of 88 Temples is one of Shikoku's biggest draws. It is a pilgrimage route that consists of 88 temples scattered across Shikoku. By some accounts 200,000 pilgrims to the circuit a year. Some are “substitute pilgrims” who do the trek for a fee on behalf of clients who contacted them through the Internet. The pilgrimage is “characterized by its casual nature, and anyone can start it from anywhere and at any time,” said Masato Mori, an associate professor of cultural geography at Mie University and the author of “Shikoku Henro” (Shikoku pilgrimage). Pilgrims can start their journey from any of the 88 temples, which belong to different schools of Buddhism.Local governments in the Shikoku region are working to have a local pilgrimage route featuring 88 Buddhist temples designated as a UNESCO World Cultural Heritage site.

The pilgrimage is known in Japanese as the henro. Follow in the footsteps of the famous monk Kobo Daishi (also known as Kukai). The henro, will take you to tranquil spots across Shikoku’s four prefectures. The scenery and walking weather is at its most attractive in spring or autumn, when changing colors brighten the path and its not too hot or cold. It is said that all those completing the entire pilgrimage will have their prayers or wishes answered.

Some temples are only a few kilometers apart and five or six can be visited in a day. Other are more than 100 kilometers off the main route. To visit them all requires a trek of about 1,400 kilometers (870 miles). For the visit to be official pilgrims carry a special book that is stamped at each temple.

There is nothing particularly extraordinary about the temples. The route is what matters. Completing the entire circuit is said to rid the soul of 88 evil desires defined by Buddhist doctrine. The route begins in Tokushima and has traditionally been made in a clockwise direction. About half the temples have accommodation for pilgrims (¥4,000 a night including two Buddhist vegetarian meals).

Much of the route of the 88 temple pilgramage is along narrow, sometimes busy road. There are several tunnels after Temple No. 222 that make some pilgrims worry they are going to get hit by a passing vehicle. On the 76 kilometers stretch between Temples No 23 and 24 volunteers give out brochures that alert pilgrims of particularly dangerous sections of the walk.

When pilgrims visit the temples they submit notebooks or scrolls on which they receive a written certificate verifying their visit which features the name of the Temple and its principal Buddhist image, together with a vermillion seal. Each notebook entry cost ¥300; a scroll entry ¥500. Once completed the scroll are treasured by their owners. In in the mid 2000s there was a problem with thieves stealing them. Websites: 88 Temples site Shikoku Henro Trail ; Shikoku Pilgrimage Guide shikoku-tourism.com; Association of the Shikoku Pilgrimage Temples tourismshikoku.org ; Map: /tourismshikoku.org/henro

It is said that the 88 temples were visited by the famous monk Kobo Daishi (Kukai, 774-835), who was born in Shikoku and founded the Shingon sect of Buddhism after a visit to China. But in reaility It is unclear how the Shikoku pilgrimage got started. The tradition that the it was started in 815 by Kukai, is “not a clear historical fact,”Mori said. He told the Yomiuri Shimbun the attribution of the holy trek to the monk was not clearly established until a monk made reference to it in a document during the Meiji era (1868-1912).. The monk belonged to the Shingon school, the teaching established by Kukai. [Source: Hiromasa Takeda, Yomiuri Shimbun, November 25, 2016]

Hiromasa Takeda wrote in the Yomiuri Shimbun: “The number of the temples deemed sacred in the pilgrimage also changed. For example, Daigoji Monjo, the collection of documents from the Kamakura period (1192-1333) at Daigoji temple in Kyoto, recorded the number of temples as 33, but a guidebook in the Edo period (1603-1867) said, “Eighty-eight sacred sites are visited for worship today.” Nevertheless, there are apparently no documents clearly explaining how the number of temples changed.

”The Shikoku pilgrimage became popular among the public during the Edo period and later drew many pilgrims from the coastlines of the Seto Inland Sea and other parts of the nation. The pilgrimage acquired a more leisurely nature in the modern period as bus and steam vessel services were developed. The holy trek also came under the spotlight as a form of hiking when the nation leaned toward militarism during the latter half of the 1930s, because the government promoted the exercise as a means to help the public develop physical and mental health.

“In the post-World War II period, more and more people visited the 88 temples on bus tours or in their own cars. The pilgrimage became a major tourist attraction for Shikoku when the Seto Ohashi bridge opened in 1988. Since the latter half of the 1990s, the ritual has been considered a sightseeing resource essential to vitalizing local communities.“Since those days, more and more media outlets have been promoting [the Shikoku pilgrimage] by focusing on its ties with Kukai,” Mori said. “In addition, an increasing number of young people try the holy trek on foot to seek a challenge or embark on a journey of self-discovery.”“

Pilgrims on Circuit of 88 Temples


modern Buddhist pilgrim Many pilgrims wear the traditional pilgrims outfits (a white robe and a conical straw hat) and carry a walking stick. Most pilgrims who do the pilgrimages visit most of the temples by tour bus on several visits over a long period of time. A few still do it on foot. They needs at least 45 to 60 days. With a car all 88 can be visited in about 10 days. The pilgrims, known as “henro”, and are treated with great reverence and hospitality, often given “osettai”, free lodging, food and in some cases cash.

Masanao Umezaki wrote in the Yomiuri Shimbun: “A white upper surplice-like garment, a kesa sash worn around the neck and a walking stick are recommended for the pilgrimage. In Inoue Shoten, a shop in Tokushima Prefecture, a white upper garment with sleeves is available at 2,500 yen, a sash goes for 1,500 yen and a walking stick is priced at 1,575 yen. Pilgrims are also advised to carry a rosary, candles and incense sticks. If people want to get a red stamp at temples, a special notebook for the stamps is also necessary. Amulets of different colours can be bought at the temples. Visitors write their names on the amulets and hand them in to the temple. White amulets are recommended for beginners. Various sets of items for the pilgrimage are also available at online stores.” [Source: Masanao Umezaki, Yomiuri Shimbun, May 12, 2014]

"If someone wearing the pilgrimage outfit loses the way, local people will show the way and some might even invite the person to stay at their house. The walking pilgrimage involves such contact with local people," says Koichi Kagayama, a non-fiction writer whose works include "Ohenrosan" (Pilgrim). While making a pilgrimage, one’s career or title are meaningless. Making a pilgrimage is having an experience of leaving one’s current life and starting a new life. I recommend that a person who is going to make a pilgrimage start a journey after thanking people who deserve to be thanked, apologising to people who deserve an apology and expressing affection to those one likes or loves," Kagayama says.

There is one man who considers himself a professional henro who has done the 88-temple circuit more than 120 times by bicycle. He is not particularly religious as is the case with many of the pilgrims. At some guesthouses the pilgrims have worn out their welcome by hanging around for a couple of days, eating and drinking, and then disappearing without paying. Some pilgrims are homeless people. An increasing number are young people, some in their mid teens, in search of themselves.

Masanao Umezaki wrote in the Yomiuri Shimbun: “A walking pilgrimage that does without transportation is still popular. If one walks the entire route of about 1,200 kilometers , it takes 40 days at 30 kilometers a day. It is monotonous and hard, and one might lose one’s way sometimes. The motivation of people who make a pilgrimage varies. Keiji Inoue, who runs a pilgrimage-related shop near Onzanji temple, the No. 18 temple, in Komatsushimae, told the Yomiuri Shimbun that many people who want to reset their lifestyle by reflecting on themselves. "Making a pilgrimage may give them a clue," he adds. [Source: Masanao Umezaki, Yomiuri Shimbun, May 12, 2014]

“The pilgrimage boom has also seen a new demographic of pilgrims. In addition to the usual seniors, young women who like "power spots" such as temples have increased. Tokushima Prefecture is proposing tours for them that combine sightseeing and local foods. Some people travel alone to ponder their problems, and some travel with friends. Pilgrims meet strangers along the way, which may be another charm of the pilgrimage.”

Hiromasa Takeda wrote in the Yomiuri Shimbun: “Among the pilgrims dressed in white at Ishiteji temple in Matsuyama in late September was Shinsuke Tosa from Okayama, who was making the journey to pray for his mother, who is suffering from an intractable disease. The 34-year-old was visiting the No. 51 site of the pilgrimage on the 27th day of his trek, which he began around the second anniversary of his grandfather’s death two years ago. “My legs ache and I feel lonely, but I’ve been encouraged by meeting other people,” a satisfied-looking Tosa said. “[This pilgrimage] has given me a chance to self-reflect.” Sadamu Okamoto of Matsuyama was visiting the temple with his wife and daughter as part of the family’s three-day drive covering 17 of the sacred sites. “We’re also enjoying trying local udon eateries,” the 67-year-old said. [Source: Hiromasa Takeda, Yomiuri Shimbun, November 25, 2016]

The year 2015 marked the 1200th anniversary of Shikoku 88 Temple Pilgrimage and many pilgrims made the extra effort to finish the henro. Masanao Umezaki wrote in the Yomiuri Shimbun: Many pilgrims, young and old, choose to trek all the way or cover the whole route by tour bus, hoping to reflect on themselves. "I come here because everything in my life has settled," says a 64-year-old woman clad in white pilgrimage clothes, adding that she lives in Tokyo and has been walking alone for two months. [Source: Masanao Umezaki, Yomiuri Shimbun, May 12, 2014]

“Ryozenji temple in Naruto is the first temple of the 88 temples on the pilgrimage route, and many people start their pilgrimage from there. Guide Shigeru Fujimoto, who often finds himself instructing young people how to chant a Buddhist sutra, runs a shop selling pilgrimage-related items in front of the temple. The number of people who visit the temple increased from the start of the new year, and sales of my shop have gone by 50 per cent. Some people are repeating the pilgrimage in this milestone year," he says.

“Many people visited the pilgrimage temples during the Golden Week, a collection of four national holidays during a seven-day period. The number of tourists who visited Tokushima Prefecture during the period was 59,301 a day on average, up by 7 per cent from last year. An official at the prefectural government’s tourism policy division confirms that the numbers are up because of the 1,200th anniversary."

”To cash in on the boom, tour agencies have planned various pilgrimage tours. Hankyu Travel International has organised four Tokyo-based tours to visit each of the four prefectures in Shikoku separately. The first tour visits Tokushima Prefecture and starts at 49,990 yen (Bt16,000) yen for three days and two nights. Club Tourism International Inc has organised a tour for five days and four nights starting from the Kanto region, which includes a private room for individuals. It intends offering the tour on three separate occasions, and they will cost between 155,000 yen and 160,000 yen. Yomiuri Travel Service has a 14-day tour starting from Sendai, which visits 88 temples in Shikoku and Koyasan, the main temple of the Shingonshu sect, in Wakayama Prefecture. The tour costs between 320,000 yen and 350,000 yen. All of these tours visit pilgrimage temples by bus or taxi.”