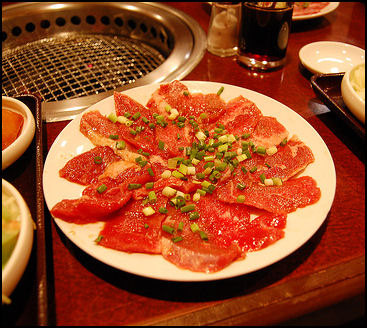 Kobe, Matsuzaka, Maeda and Omi beefs are famous for their taste, tenderness, beautifully marbled appearance and high prices. Marbled means that meat has a lot of fat in it, which makes it tender. When cooked the fat liquefies, tenderizing the meat and giving it a mellow, delicate taste.

Meat is given a rank of between one and 12 in Japan. The differences between Kobe, Matsuzaka, Maeda and Omi beef are subtle and difficult for non-Japanese to appreciate. Omi beef comes from Shiga Prefecture. It has a tradition that dates back to 1590. There is a record of beef from there, marinated in soybean paste, being given to the Tokugawa shogunate between 1781 and 1788. Beef from the Iga region is also greatly prized. It comes from the Iga area in Nara, where ninjas are also from and not far from where Matsuzaka beef.

The cows for Japan's top beef come almost exclusively from the Tajima Valley in Hyogo Prefecture. These cows have official papers with their nose print and information on their bloodlines that goes back several generations. The ancestors of these cattle are said to have arrived from Korea in the 5th century B.C. Producers buy the calves when they are about 8 months and slaughter them when they are between 32 and 35 months old.

Only heifers and bullocks (males castrated at three or four months) are sold. Bulls are considered inferior because male hormones are thought to toughen the meat. The best animals are sold at auction on Tajima and Tanba and on Awajishima island, all near Kobe in Hyogo Prefecture.


sukiyaki Much of Japan’s high quality beef comes from cows that are fed beer and massaged. The massages increases the animals circulation and ensured the even growth of fat below the skin. The claim that the cows listen to Mozart piped in to their bars appears to be a myth.

The cows are brushed with clear liquor to keep their coats in peak conditions. The "massages" are stiff rubdowns with a wire brush that are done about every other day. Some farmers feed beer to their cows every week. Some like it. Other have to be force fed. Six to eight months before the beef is sold, the cows are fed beer to increase their appetite and relieve stress.

The cows spend almost all their time in 17 square-foot stalls in barns that are heated in the winter and cooled with fans in the summer. Physical activity is kept to a minimum. One farmer told the New York Times. "The most important thing is, at the early stage the cows must eat a lot of high-fiber foods like hay, wheat bran, corn and soy bean byproducts. That stretches the stomach and make sit big."

One farmer who raised Matsuzaka cows told the New York Times he doesn't eat the beef because he becomes too attached to the cows. Yoko Ono made a fortune from cows in New York.


shabu shabu Kobe beef is the best known of Japan's tender and expensive beefs. It comes from cattle that belong to wagyu breed, which are carefully bred, raised on special feed, fed beer to stimulate their appetite, and given daily massages with sake to spread their fat evenly for which they are graded. No hormones or antibiotics are given to the animals.

Kobe beef is better viewed as rating system rather beef from a particular region. Often the cattle that produce Kobe beef come from Kyushu or Mie Prefecture or some other place that isn't anywhere near Kobe. It is even possible to get American-produced Kobe beef if the meat comes from black wagyu that has been raised naturally and has been kept hormone free.

Only beef that receives a rating of seven or above can be sold under the Kobe beef label. According to Stephen Smith, a researcher at Texas A&M, Kobe beef is healthier than regular beef. It is much higher in unsaturated fat and has high levels of oleic acid, the fatty acid in olive and canola oil that have ben shown to lower bad LDL cholesterol.

Kobe beef is known around the world because Kobe is a major international port. In the old days ships stopped there from all the world. Seamen tasted high quality beef of cattle raised in the area and spread the news. 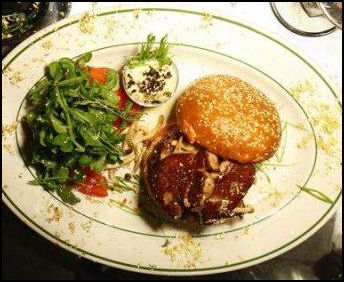 $175 Wall Street burger
made with Kobe beef The wagyu cattle used in Kobe beef were originally used to pull plows in rice fields and were not raised for meat. They are black and have a glossy coat. Experts say the beer and sake massages are all fine and dandy but what makes Kobe beef special is derived through breeding and a long, careful feeding program.

Wagyu means “Japanese.” The highest price ever paid for a wagyu cow was ¥49 million in 1989. Wagyu cattle are fed 36 to 82 months, almost twice as long as American beef cattle. Kobe calves are fed a mixture of straw and oats, Adult are give mixture of corn, bran, oats and barley. The pens of Kobe cows are so clean they hardly have any smell.

Kobe-style beef is produced from wagyu cattle in the United States and Australia. Some of it is sold back to Japan.

The Japanese Agricultural Ministry wants to pass a law making the use of the Wagyu label exclusive to Japan-raised cattle, excluding wagyu cattle raised in the United States and Australia. According to the proposed law only meat the four cattle breeds — Japanese Black, raised nationwide; Japanese Polled, raised in Yamaguchi prefecture; Japanese Brown, raised in Kumamoto and Kochi prefecture and Japanese Shorthorn, raised in Iwate and Aomori prefecture — or a hybrids from those four breeds can carry the wagyu label and the label would be protected under copyrights and intellectual property laws.

Matsuzaka is a small town on the Pacific coast of Japan. Matsuzaka beef is not as well known as Kobe beef because Matsuzaka is not a major port. Only cows raised here can carry the Matsuzaka label.

Some say Matsuzaka is better because even though its riddle with fat it has a beefier flavor. Stephanie Strom wrote in the New York Times, "I tried four different kinds of Matsuzaka steak...and found it very, very good, even though I prefer my meat lean. You do not taste or feel the fat when you chew; it's very flavorful. My one complaint is that you can't eat a lot of it; it's too rich."

Farmers insist "climate and water" and the "virginity of the cows" make Matsuzaka special. Other say it just mystique. The Japanese food critic Asako Kiso told the New York Times, "There is not a huge difference between Matsuzaka and Kobe beef. Both are high-quality meats, with lots of very evenly distributed marbling."

Each year the best cows are brought to the annual Matsuzaka competition, which is held in November. In 1989, at the height of the bubble economy, a championship cow was sold at competition for $392,000. In 2001, in the midst of a long recession, the champion sold for $81,600. The finalists sold for $24,000.

Few farmers get rich unless they sell championship animals. Most cows sell for $10,000 a piece, which seems like a lot but is not much when subtract all the labor and overhead. The calves cost around $6,500 and between $3,200 and $4,000 is spent on them in their lifetime. Most farmers have to do other jobs to make ends meat.