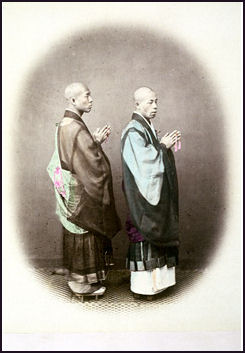 Nichiren Buddhism — the largest of the early sects that remains active today — was founded in the 13th century by Nichiren (1222-82), a Japanese monk who promoted the Lotus sutra as the "right" teaching, and believed that violence was sometimes justifiable. His main claim to fame was predicting the Mongol invasions.

Nichiren Buddhism grew in influence over the centuries. It was based in an interpretation of the “Lotus Sutra”, the central text of text of Tendai and became linked with samurai and the unity of the state and religion. Many present-day Buddhist sects have their roots in Nichiren Buddhism.

Nicheren urged people to chant “Namu myo ho ren ge kyo”—“adoration to the scripture of Lotus Sutra.” The Lotus Sutra affirms that all people, regardless of gender, capacity or social standing, inherently possess the qualities of a Buddha, and are therefore equally worthy of the utmost respect. The Nichiren central doctrine is “ Rissho Ankoku “ which means “spreading peace throughout the country by establishing the True Dharma and uniting society through the Lotus Sutra.”

Based on his study of the sutra, Nichiren established the invocation (chant) of Nam-myoho-renge-kyo as a universal practice to enable people to manifest the Buddhahood inherent in their lives and gain the strength and wisdom to challenge and overcome any adverse circumstances. Nichiren saw the Lotus Sutra as a vehicle for people's empowerment - stressing that everyone can attain enlightenment and enjoy happiness while they are alive.

Nichiren Shu is one of the larger modern Nichern sects. It has 3.8 million members and is led by Rev, Ryokou Koga. The group is currently trying to spread itself more overseas and has temples in 12 countries, including Brazil, Germany, Indonesia, India and the United States and has 16 aid projects going Laos, Myanmar, Nepal, Sri Lanka, India and Vietnam.

The son of a fishermen, Nichiren entered a monastery as a boy and was kicked out at age 31 for his militant views. Although he played a role in preparing Japan for the Mongol invasion, he was exiled twice for getting people riled up with doomsday predictions. In his memorial “Establishing Right and Making the Country More Secure” he insisted that there must be a national religion and all other sects should be suppressed. He called the Pure Land sect the Everlasting Hell and claimed Zen Buddhists were devils. Although he was condemned by the government and the traditional sects he was popular among ordinary people.

According to Columbia University’s Asia for Educators: “Nichiren (1222-1282) was a reformer Buddhist monk in Kamakura era Japan who established his own sect (the Nichiren sect) based on devotion to the Lotus Sūtra and chanting the title of the sūtra Namu Myōhō Renge Kyō. Nichiren was often controversial and criticized by government authorities because of his prophecies that social problems and natural disasters were based on a failure to adhere to his form of Buddhist practice. He considered himself a reincarnation of the Bodhisattva Jōgyō. His last sermon, Risshō ankoku ron (“On Establishing the Correct Teaching and Pacifying the State”), ca. 1250, is one of his most important treatises.” [Source: Asia for Educators Columbia University, Primary Sources with DBQs, afe.easia.columbia.edu ]

There are different takes on Nichiren as a historical figure.According to the Soka Gakkai website, “Nichiren was born in 1222 in Japan in the Kamakura Period (1192-1333), a time of clan warfare, social unrest, natural disasters, famine and epidemics. The common people, especially, suffered enormously. Nichiren wondered why the Buddhist teachings had lost their power to enable people to lead happy, empowered lives. While a young priest, he set out to find an answer to the suffering and chaos that surrounded him. His intensive study of the Buddhist sutras convinced him that the Lotus Sutra contained the essence of the Buddha's enlightenment and that it held the key to transforming people's suffering and enabling society to flourish.” [Source: Soka Gakkai website]

“Nichiren was critical of the established schools of Buddhism that relied on state patronage and merely served the interests of the powerful while encouraging passivity in the suffering masses. He called the feudal authorities to task, insisting that the leaders bear responsibility for the suffering of the population and act to remedy it. His stance, that the state exists for the sake of the people, was revolutionary for its time.

“Nichiren's claims invited an onslaught of often-violent persecutions from the military government and the established Buddhist schools. Throughout, he refused to compromise his principles to appease those in authority. Nichiren's legacy lies in his unrelenting struggle for people's happiness and the desire to transform society into one which respects the dignity and potential of each individual life.”

Nichiren developed into a folk hero as well On the tale of Nichiren and the Smooth Horned Turban Shells, Kevin Short wrote in the Daily Yomiuri: One day Nichiren, who was born in Chiba Prefecture on the opposite side of the Uraga Straits, was crossing over to Kanagawa by boat. On that day, the tide was out, and the boat ran aground in the shallows before reaching the beach. A kind fisherman waded out into the water and carried the priest the remaining way on his shoulders. On the way in, however, he stepped on a spiny sazae and cut open the bottom of his foot. Back on shore, Nichiren not only healed the wound, but uttered an enchantment that removed the dangerous spines from all the turban shells living in the area.[Source: Kevin Short, Daily Yomiuri, July 27, 2012]

This story is typical of a very common folklore genre featuring not only Nichiren, but also many other famous priests, especially Kukai, the great eighth to ninth century monk and founder of the Shingon Buddhist sect. Most of these didactic stories share a similar structure--the hero performs a useful miracle in return for some small kindness or unselfish deed rendered by the common people. Many Christian stories involving local saints fall in the same genre.

Nichiren: “Rectification for the Peace of the Nation”

In “Rectification for the Peace of the Nation” (Risshō Ankoku Ron), Nichiren wrote: “The Sūtra of the Humane King (Ninnō kyō) states: “When a nation becomes disordered, it is the spirits which first show signs of rampancy. Because these spirits become rampant, all the people of the nation become disordered. Invaders come to plunder the country and the common people face annihilation. The ruler, the high ministers, the heir apparent, and the other princes and government officials all quarrel with each other over right and wrong. Heaven and earth manifest prodigies and strange occurrences; the twenty.eight constellations, the stars, the sun and the moon appear at irregular times and in irregular positions, and numerous outlaws rise up.” [Source: “Sources of Japanese Tradition”, compiled by Wm. Theodore de Bary, Donald Keene, George Tanabe, and Paul Varley, 2nded., vol. 1 (New York: Columbia University Press, 2001), 296-298; Asia for Educators Columbia University, Primary Sources with DBQs, afe.easia.columbia.edu ]

“But because of this book written by Hōnen, this "Senchakushū" the Lord Buddha Shākyamuni is forgotten and all honor is paid to Amida, the Buddha of the Western Land. The Lord Buddha’s transmission of the Law is ignored and Yakushi, the Buddha of the Eastern Region, is neglected. All attention is paid to the three works in four volumes of the Pure Land scriptures, and all other wonderful teachings that Shākyamuni proclaimed throughout the five periods of his preaching life are cast aside.:

“As a result, the halls of the Buddha fall into ruin, scarcely a wisp of smoke rises above their mossy tiles; and the monks’ quarters stand empty and dilapidated, the dew deep on the grasses in their courtyards. And in spite of such conditions, no one gives thought to protecting the Law or to restoring the temples. … If people favor perverse doctrines and forget what is correct, can the benevolent deities be anything but angry? If people cast aside doctrines that are all.encompassing and take up those that are incomplete, can the world escape the plots of demons? Rather than offering up ten thousand prayers for remedy, it would be better simply to outlaw this one evil doctrine that is the source of all the trouble!”