Brahmins are the highest ranking caste group and are the top of the varna system above Kshatriyas, Vaisyas and Sudras. Brahmins have traditionally been priests, either in temples or to particular families and have traditionally been better educated, held high positions and had land and money. Many have worked as teachers, scribes, landowners and government clerks. Today they are employed in a number of professions. Many fulfill their priestly duties only a part time basis.

Brahmins are expected to maintain a high level of purity (See Below), be literate in Sanskrit and other languages, and possess knowledge of Hindu liturgy. They eschew menial labor and often have very soft hands to prove it. They do not eat ginger, onions of potatoes because they grow in the unclean ground. In caste terms they consider themselves superior to Mahatma Gandhi who was Vaisya.

In terms of caste the poorest and most lowly Brahmins have traditionally looked upon themselves as superior to kings, who belong to the Kshatriya caste of warriors and nobles, which is lower than the Brahmin caste. Early in Aryan history the Brahmins gained political and religious superiority over the Kshatriyas. Brahmins maintained their power over the centuries by being the only caste allowed to learn the sacred language of Sanskrit.

Brahmins and other members of high castes are now referred to as Forwards. With the introduction of quotas to give members of lower caste more power and access to education and to public service jobs, many Brahmins are leaving India and seeking their fortune elsewhere. One Brahmin man told U.S. News and World Report, "There is an unwritten rule for Brahmins in Tamil Nadu: Get out as so you can — and stay out."

Brahmins often live together is separate neighborhood. They began their day with a trip to the family prayer room, dab vermillion powder on their brow, light an incense stick or oil lamp and chant Sanskrit verses to a portrait of a Hindu deity such as Surya, the sun god.

On the difference between Brahmin, Brahman and Brahma: 1) Brahmin refers to a person who belongs to the priest caste, the highest caste in Hindu society. 2) Brahman describes the Absolute, the Supreme Reality of the Vedanta philosophy. The word Brahma can refer to the creator god Brahma — one of the Hindu Trinity along with Shiva and Vishnu — or the first being created with every new cycle.

Members of the highest priestly castes, the Brahmins, are generally vegetarians (although some Bengali and Maharashtrian Brahmins eat fish) and avoid eating meat, the product of violence and death. High-ranking Warrior castes (Kshatriyas), however, typically consume nonvegetarian diets, considered appropriate for their traditions of valor and physical strength.[Source: Library of Congress, 1995 *]

A Brahmin born of proper Brahmin parents retains his inherent purity if he bathes and dresses himself properly, adheres to a vegetarian diet, eats meals prepared only by persons of appropriate rank, and keeps his person away from the bodily exuviae of others (except for necessary contact with the secretions of family infants and small children).*

If a Brahmin happens to come into bodily contact with a polluting substance, he can remove this pollution by bathing and changing his clothing. However, if he were to eat meat or commit other transgressions of the rigid dietary codes of his particular caste, he would be considered more deeply polluted and would have to undergo various purifying rites and payment of fines imposed by his caste council in order to restore his inherent purity.*

In sharp contrast to the purity of a Brahmin, a Sweeper born of Sweeper parents is considered to be born inherently polluted. The touch of his body is polluting to those higher on the caste hierarchy than he, and they will shrink from his touch, whether or not he has bathed recently. Sweepers are associated with the traditional occupation of cleaning human feces from latrines and sweeping public lanes of all kinds of dirt. Traditionally, Sweepers remove these polluting materials in baskets carried atop the head and dumped out in a garbage pile at the edge of the village or neighborhood. The involvement of Sweepers with such filth accords with their low-status position at the bottom of the Hindu caste hierarchy, even as their services allow high-status people, such as Brahmins, to maintain their ritual purity. [Source: Library of Congress, 1995 *]

However, castes associated with ruling and warfare — and the killing and deaths of human beings — are typically accorded high rank on the caste hierarchy. In these instances, political power and wealth outrank association with violence as the key determinant of caste rank.*

Among Brahmins only men are allowed to serve as priest; women are often responsible for the daily pujas. Brahmin women are expected to bathe their husband's feet each morning as a sign of respect.

Brahmins may act as family priests for upper castes but not lower ones. They can officiate at shrines and temples and at rituals associated with major festivals. They conduct all the rituals performed at a marriage, are present at important religious occasions and read excerpts from the vedas and other sacred Sanskrit texts and recite from the Puranas and the Ramayana and Mahabharata. Brahmins are sometimes paid for their services with cows rather than money. 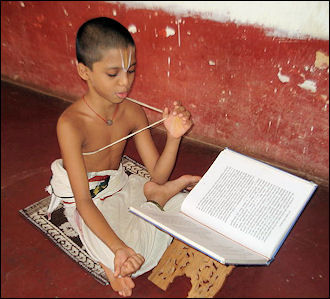 Brahmin student learning the Vedas Brahmin are expected to maintain a higher standard of purity and obey an elaborate set of taboos, which including vegetarianism (which sometimes means going without cheese, eggs or milk). Some Brahmins have long beards and shoulder-length hair. Brahmin priests are required to wash their rice in running water before eating. Priests in some places have been known to chose to die rather than eat unwashed rices. Describing a Brahmin he met, Theroux wrote, "He neither drank nor smoked...He got up at five every morning, had an apple, a glass of milk, and some almonds, he washed and said his prayers, and then he took a walk. Then he went to his office...He furnished his office sparsely."

Many Brahmins have traditionally lived off earnings from their land and occasionally presided over events and temple rituals. A large amount of their time has been spent learning and reciting Sanskrit slokas. Brahmins have also served as scholars and teachers of the Vedas and participated in sacrifices, individual worship rituals and provided training and certification for lower-caste priests. Some large sacrifices take ten days to carry out and months to prepare.

Among the Nambudiri Brahmin in Kerala only the oldest son has traditionally been allowed to marry. Sometimes marriages are arranged at birth to stay within the confines of caste rules. Sometimes The oldest son took take as many as three wives. Dowries for girls were quite high and sometimes fathers took a second wife to save on the dowry for his daughter. Younger sons either remained celibate or formed semipermanent liaisons with somewhat lower matrilineal castes.

Many business and political leaders are Brahmins. Nearly all five-star hotels and top restaurants assign upper Brahmins to attend to their rich clients. When Daimler Benz began operating in India, the company found that it needed to hire Brahmins to deal with their upper class clients.

Brahmin have traditionally been very education minded. Brahmin mothers have been expected to stay home and tutor their children 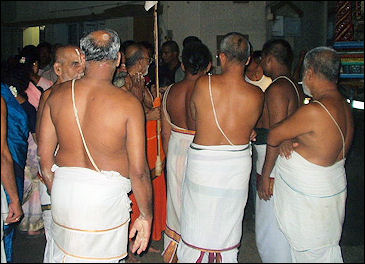 Brahmin_threads The sacred thread) is a symbol of highs status in the caste system: only the Brahmin and Kshatriya castes are allowed to wear it. It is comprised of three cotton threads that are looped over the shoulders across the chest and under the opposite arm. It signifies that the wearer is twice born: the first time by his mother and the second time when he is initiated into Hinduism and receives the sacred thread (which is known by many names, varying by region and community, including “janai”, “janeu”, “lagun”, “yajnopavita”, “yagyopavit”, “yonya” and “zunnar”).

The three intertwined threads symbolize the mind, body and act of speaking The knots tied in three threads symbolize the mastery of these three things by the wearer. The wearer is expected to keep the sacred thread clean and pollution free. If it becomes frayed, dirty or polluted by contact with lower castes or menstruating women it must be replaced. The wearer goes through great lengths — often tucking it behind his ear, to make sure it doesn’t get dirty when he goes to the bathroom, shaves or washes.

The sacred thread ceremony serves as a coming of age ceremony for the castes that wear it. Traditionally, at age seven years of age a boy’s head is shaved or his hair is cut, his body is throughly cleaned and his fingernails and toe nails are cut. If the head is shaved usually a small tuft of hair is left to show the boy is a Hindu. Before the ceremony the boy eats only one meal that can not contain meat, onions or garlic. At the ceremony which can be held at a home or a temples a Brahmin priest reads scriptures, invokes Vishnu and drapes the sacred thread over the initiates neck.

After being given the sacred thread the boy is fully initiated into his caste and is regarded as a man. He is allowed to eat with the men and is given new responsibilities. The cost of staging the ceremony can be quite high. Some times several poorer families join together to reduce costs.


There are hundreds of Brahmin castes, distinguished from one another by terms of mother tongue (e.g. Tamil, Brahmins. Konkani Brahmins), philosophical sect (e.g. Smarta Brahmins, Madhava Brahmins, Sri Vaishnava Brahmins), or identification with a particular place and profession.

Anavail Brahmins are grhastha, or “homeowner,” Brahmins, which means they can not perform priestly duties. Some have traditionally been landowners, some quite wealthy with large landholdings, while other have been mendicant priests called bhikshuka, who often beg for a living.

Some Brahmins are quite poor. One interviewed by the Washington Post in 2003 lived in a one-room hot and earned $60 a month as a truck driver, He complained, “We’ve lost all the clout we used to have centuries ago. The social standing is gone.” Some are very bitter about quotas that give Untouchables good jobs.

Chitpavan Brahmin are known for producing famous names that far exceed their numbers, particularly in the Marathi-speaking areas in western India. A number of people close to Mahatma Gandhi as well as famous writers, scholars, economists, freedom fighters against the British, and even terrorists have come from the Chitpavan Brahmin caste. There are only around 250,000 of them. There was nothing that special about them until the 18th century when they established a powerful kingdom and did well under the British. Said to be the descendants of seafarers, they are relatively fair skinned and often have blue or green eyes and some have speculated that they may have original;; bee Greeks, Jews, Turks or Egyptian.

The success of the Chitpavan Brahmin has been attributed to their aggressive pursuing a Western education and their traditional positions in villages as headmen and accountants. Their have also been traditionally regarded as self-assured. A 19th century Indian newspaper described them as “a very frugal, pushing, active, intelligent, well-taught, astute, self-confident and overbearing class” following “almost all callings and generally with success.” About the only thing they are not so good at is being priests, the traditional calling of Brahmin.